Jurgen Beneke, the 1994 Downhill World Champion has launched a charity auction for one of his 1994 Manitou Downhill frames.

The auction for the 1994 Manitou frame will also include his 1993 Downhill World Cup leader’s jersey, complete with sponsor patches hand-sewn by his grandmother, with all proceeds going to the Wings for Life Foundation. A charity which uses 100% of its funds to help spinal cord research.

In 2010, Jurgen broke 2 vertebrae in his back but luckily he ended up making a full recovery with no spinal cord damage. This made him realize how close he had been to a serious spinal cord injury and following this, he thought it was time to give back to the bike community and those who aren't so lucky. 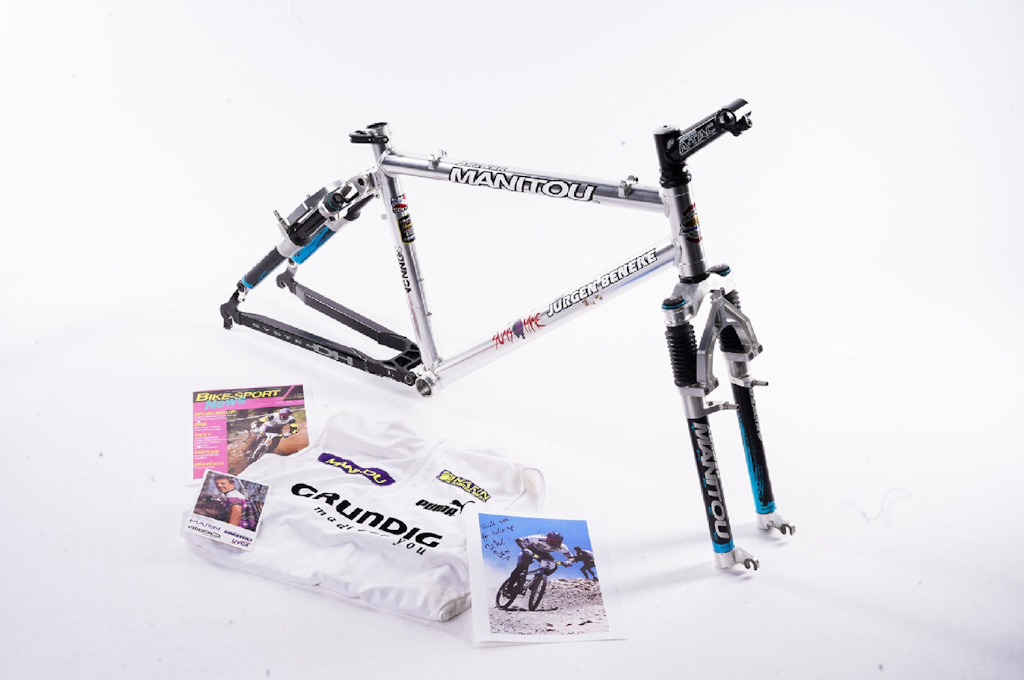 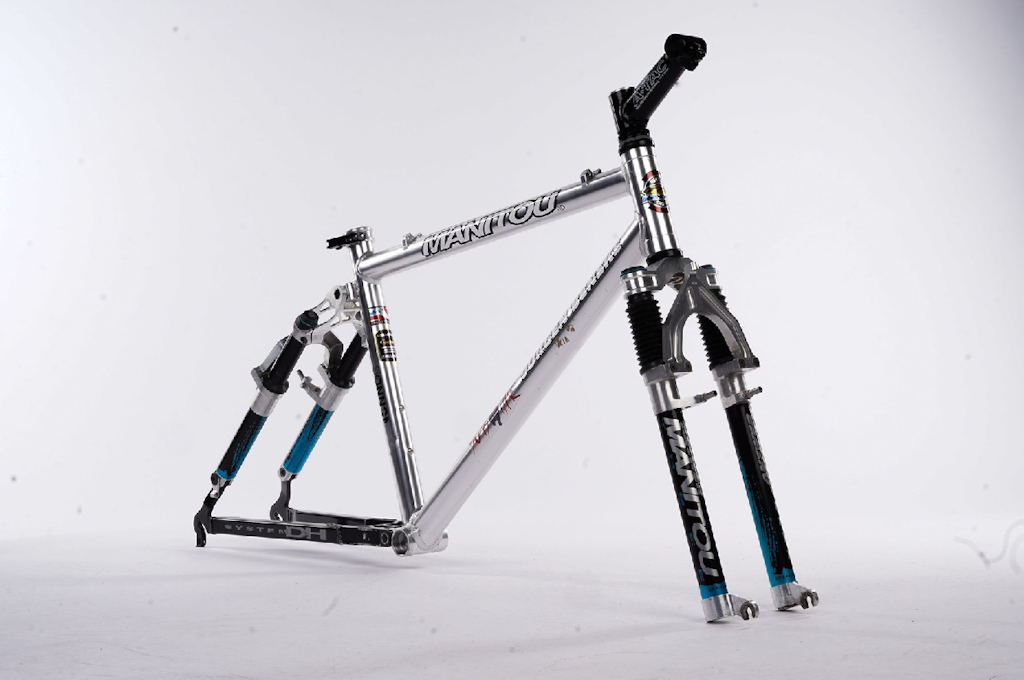 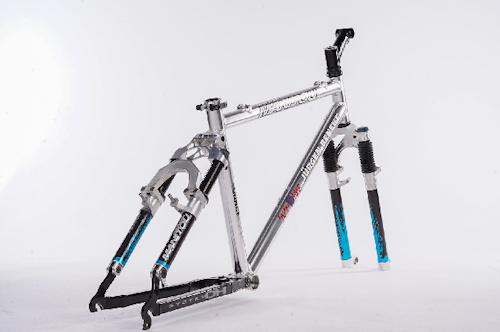 Auction bidding opens September 1 and closes on September 15. You can find out more here.

tacklingdummy (Aug 30, 2020 at 9:39)
So, you could ride it frontwards and backwards by just swapping the seat and the stem? Brilliant. That would be like having two bikes with different geos.

ReeferSouthrland (Aug 30, 2020 at 23:58) (Below Threshold)
I'm from that era, have the money and see no purpose whatsoever of buying this for mor tha 1k. Sorry, wasn't a fan back then of this design, imagine what I think now. Manipoop

benijets (Aug 31, 2020 at 5:26)
@ReeferSouthrland: Thank you for the comment. - I am not selling this to make $$$. It's a fundraiser and you don't need to buy (bid on) the frame. You can give to the Wings for Life foundation and maybe deliver some hope to the racers that have lost such much because of spinal cord injury. gf.me/u/yi23y5 thank you.

Either way, I'll be donating to the cause.

50percentsure (Aug 30, 2020 at 10:01)
Where to begin with the sketchiness of those pioneering DH designs eh... Can't imagine the guts it took to stomp the pedal on this and hold it there. Legends. Good on ya Mr Beneke for donating such a treasured bike for a good cause.

wowbagger (Aug 30, 2020 at 13:56)
i mean, it probably was a step up from throwing yourself down the very same slopes on fully rigid bikes, but still, yikes!

tobiusmaximum (Aug 30, 2020 at 11:50)
I loved that Atac stem. I remember the days when riser bars first arrived, unless you had an Azonic stem you had to put a penny in the stem clamp and screw the bolt in from the other side to open the clamp up to get the bend of the bars through. Ah, the good old days.

DoubleCrownAddict (Aug 31, 2020 at 7:20)
I remember the first riser bars were the Club Roost brand, and everybody was stoked on them until everybody started breaking them.

JoeLawwill-Shimano (Aug 30, 2020 at 14:00)
This is great Jurgen! I loved seeing all of this footage put together. I clearly remember sitting in many start gates wondering if my bike was going to make it to the finish. I will for sure donate as I know I have a had my fair share of close calls over the years! Hope to cross paths with you again one of these days.

benijets (Aug 31, 2020 at 5:19)
thanks Joe. I was happy when your Dad eliminated the fear of snapping frames by building a solid bike with Yeti/Schwinn. The Straight 8 was the first legit DH bike of my life.

BetterRide (Aug 30, 2020 at 16:14)
Jurgen, you're the man! I remember you smoking all of us in the Moab downhill racer, then beating all of our race times on your hardtail then you rode the whole Porcupine rim loop from town. I learned a lot from you and I had one of those oh shit moments racing indoor BMX with you in 1999 in Boulder. I wanted that frame so bad when it came out! I'll definitely be bidding high for it. Thanks for the inspiration!

btw. I still like to ride the rim from town. Cheers

tonestar (Aug 30, 2020 at 17:38)
Even though I would love to own that piece of history, I know I can't afford to buy the frame and jersey. Jurgen is a true hero for doing this, so I have made a donation on the GoFundMe. I implore all of you commentors to do the same, it's one thing to talk the talk, now lets see who will buck up and show their support.

benijets (Aug 31, 2020 at 5:31)
YES, love you for that comment. I hope that the donor list of the GoFundMe will read like a MTB result sheet from the last 30 years. Let's make it happen for the racers that faded out of sight because of injury. gf.me/u/yi23y5

cueTIP (Aug 31, 2020 at 9:47)
I am actually going to put in a bid for this. Looking for unique industrial design to spruce up our R&D department testing room and this shows that it's OK to try weird and terrible ideas to see if anything sticks.

I mean, we make plumbing valves, but I like bikes and it's my company so yeah, that can justify the tax write off right?

A1990ToyotaHilux (Aug 30, 2020 at 12:03)
God damn man, it's so hard to look at those people bombing down those trails with sketchily narrow bars, tire width and geometry, comparable to road bikes and sizing that makes these bikes look like size S for 2 meter tall guys. It's all so sketchy and I'm afraid just by looking at it.

Eric27 (Aug 31, 2020 at 8:12)
I got into Mt. Biking in 1994 and followed Jurgen's career all through the 90's. Thank you for doing this. I had a bad crash 15yrs ago and fractured my back. Thankfully I made a full recovery and still ride 4-5 times a week. As I laid on the ground with a spinal stinger and believing I was paralyzed for several minutes I was in complete panic mode. As feeling came back and I began to move I had the greatest sense of relief of my life. Not all have this fortunate outcome in our sport. I have made a donation and again thank you for doing this.

palmermc83 (Aug 31, 2020 at 22:12)
Jurgen, hats off to you for doing this - super rad! It's great to see this ancient footage and it brings me back to when I was just getting into riding in the mid 90s and seeing you in the World clCup on some obscure TV channel at an odd hour of the night - inspiring! Proof that you were going harder and faster back then than most of us ever will even with state of the art gear. I'm sure you still have enough obscure frames and sketchy prototype Michelin tires in your garage for a few of these actions. I'll be throwing in a few bucks and hope to catch you for a ride next time I'm back east! Cheers! -Mark

fattyheadshok (Sep 6, 2020 at 18:00)
Awesome thing to do. Spinal injuries are so scary. Jurgen is right. How often do we get lucky? We push the limits of ourselves all the time. It doesn’t always end well. So yeah he’s doing an excellent deed here. BTW I’m glad this guy doesn’t show up at the ESC. None of us old guys would stand a chance!!

zoobab2 (Aug 31, 2020 at 0:10)
Doug sold Manitou to Answer. One day he started to weld a frame in his garage, and needed a fork for it. He called Answer, but he was thrown out. The guy had to buy a Manitou fork on the second hand market!

deadbeat (Aug 30, 2020 at 17:15)
Nice one Beni! That’s something pretty special. Amazing gesture for a good cause by one of the greats! Incredible how hard they rode those bikes back in the 90’s

cristiantomlinson (Aug 31, 2020 at 2:41)
Pioneers who pushed the limits and forced the pace of MTB design .. So we all benefited in the medium-long term Just a little fact

shredjekyll (Aug 30, 2020 at 9:34)
Seems like the average weight of riders was higher back then? Or maybe its just the bulky pads making it look like that?

vitality (Aug 30, 2020 at 10:40)
not my dream bike, my one was 1995 GT LTS found one with original RS suspension and original xt group set. but its a daily commuter and newer ben serviced. so probably waste of money.

tonestar (Aug 30, 2020 at 17:27)
Because, he only has the frame/fork. The frame is cracked and not ridable, so it is going to go onto a lucky collectors wall anyways.

bitnaut (Aug 30, 2020 at 20:11)
@tonestar: I think almost all of them cracked at the head tube...I know that's where the crack on my Manitou is but I keep holding onto it more as a memory of old days than a functioning bike...
Below threshold threads are hidden