Join Pinkbike  Login
News Source: Gene Hamilton
It is great to see the junior classes in mountain bike racing growing by leaps and bounds and to meet such a great group of kids. At the highest level of junior downhill racing, the Junior Expert class the fields are bigger than ever in the history of the sport! At the second and final Us Team World Championship Qualifier in Angel Fire New Mexico 43 of the fastest junior downhill racers in the country gathered to battle it out and see who will represent the US at the Worlds (along with first qualifier winner Kevin Aiello).Practice started out slick with some light snow on Thursday and got worse with a lot of snow Thursday night and off and on all day Friday.

Friday's practice started cold, with icy trails and ended colder with snowy trails. These conditions didn't exactly inspire confidence and a few racers ended the weekend early with injury inducing crashes. Conditions started to improve on Saturday with no rain and a lot of sun on the bottom of the course. Unfortunately the top of the mountain was covered by a cloud resembling the one constantly perched atop the Adam's Family house. Lucky for all the sun came out in force on Sunday and by the time of the pro seeding one the track was dry and dusty save for two big puddle crossings. 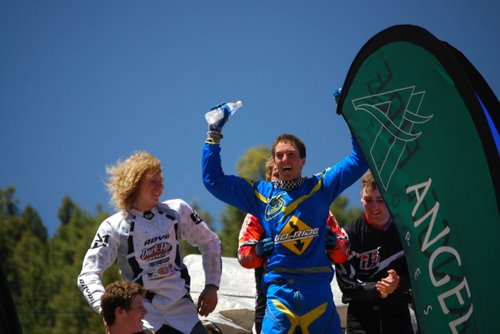 The course was one of the roughest tracks I have ever raced, combining the old, steep Alpha course upper woods with a long super rough new section and then using the bottom half of the world cup track. Along with the normal demands on skill fitness and strategy would definitely play a big part in this race.

With the usual suspects in attendance minus Joey Schulser and Kevin Aiello it looked like a stacked field. The first person to take over the hot seat was BetterRide camp alumni Dustin Belcher (Totally Wired Racing) with a 5:53.04. A few racers later it was Naish Ulmer(Go-Ride) taking the hot seat away with a blistering time of 5:37.58. Then it was time to sit in the hot seat and wait for another 35 junior ex racers to hit the track. Graeme Pitts (Dark Horse Racing) was the next threat to come down and he posted a fast 5:57.11 but was only good enough to take over third place. A while later Taylor Borucki came through with a 5:53.78 giving Dustin a scare but missing second place by .7 seconds he was quick enough to take third away from Graeme. East coast threat Will Collins (Morewood/Fox/Smith) racing with a separated shoulder suffered two weeks ago in Plattekill went a little to conservative and had a disappointing run and finished 12th. Derek Teel made Graeme's heart race as he posted a time on the same second as Graeme but came up .7 seconds back with 5:57.84 to hold on to 5th place.

What a weekend! I was really happy to see such great sportsmanship from both the winners and those who didn't finish as well as they would of liked and proud to see three racers I coach on the podium!*

Naish isn't just one trick pony either, on Saturday he worked hard in the mud and snow to win the Super-D too. Not a bad weekend for the kid!, we will definitely being seeing more of him in the future. 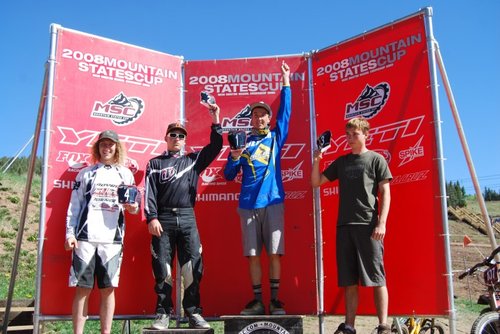 *Naish Ulmer and Graeme Pitts are coached by BetterRide and Dustin Belcher is an alumnus.

If you would like to join these racers on the podium or simply ride at your best join Gene Hamilton and BetterRide for a skills camp this summer.

About BetterRide:
Gene Hamilton founded BetterRide in 1998 to provide structured, professional mtb skills coaching to racers of all ages. Gene is a licensed USA Cycling Expert Coach and has over 17 years of coaching experience including 11 years coaching mountain biking. Praised for his ability to breakdown skills, demonstrate and explain them so anyone can ride with skill and grace. His coaching highlights include coaching many top pro racers (Chris Van Dine, Chris Canfield, Eli Krahenbuhl, Andrew Pierce, ..) top junior experts (Ben Hulse, Naish Ulmer, Parker Worthington, Graeme Pitts...) and hundreds of weekend warriors looking to have more fun on the trails. Gene is a pretty good racer too, in 13 seasons as a pro downhill racer he has won a Silver (2002) and two Bronze Medals (2006, 1999) at the UCI World Masters Championships. For more information head to www.betterride.net