Competition for spot on the US Junior Worlds Team Heats up at Plattekill!

Join Pinkbike  Login
News Source: Gene Hamilton
With the World Championships moved up this year do the Olympics the race for a spot on the US team is tight. The first qualifier took place at Plattekill this weekend and had the most stacked junior ex field I ever seen. The usual suspects from the West were there, Kevin Aiello, Graeme Pitts, Joey Schulser and Naish Ulmer (1st through 4th at Sea Otter and 1st through 3rd at NMBS 1 in Fontana has well as some East coast talent and some of Darner's RPM Yeti boys.On a fun, challenging and slippery course the drama started on Saturday when super fast east coaster (and local favorite) Will Collins crashed due to a brake malfunction (the kid is pretty cool and honest too, his brake did break but he also admitted that part of the crash was because he was pinning it chasing eventual pro winner Geritt Beytagh through a slick, off-camber section) and bruised a few ribs and tweaked his shoulder.

The kid is tough too, despite the screwed up shoulder and ribs he decided to at least "get down the course" (his words) and finished 10th, even after wrecking on the landing of a big drop! Coloradan and BetterRide camp alumni Joey Schusler had a bit of good luck/bad luck as they missed his time on his first run (as well as 4 other racers). This was bad luck because he said he had a great run with a pinned top section but good luck because he blew his chain and was able to get a new chain on for his re-run. His re-run was quite good and landed him in 5th position. Being from Colorado I didn't know all of the fast east coasters and quite a few put in some great runs, 15 year old Neko Mulally took home second place (this guy is going to really be killing it by the time he is old enough to go to the Worlds) and Zach Faulkner snagged 4th. Just 73 hundredths of a second off Neko in third was BetterRide coached Naish Ulmer (another victim/beneficiary of the first run timing error) riding on a broken fork (his arch was cracked all the way through). I finally had the pleasure of meeting Kevin Aiello, the Californian riding for Yeti who I heard was tearing up the junior ex field with a 3 race win streak starting at Bootleg in February, then the Fontana NMBS and the Sea Otter. Being from California a lot of people expected him to struggle in the mud but he rode it just fine and added to his win streak with another victory.

I was there coaching Naish Ulmer and Graeme Pitts (who after a great start to the season with a victory and then two second places behind Kevin Aiello crashed out of this race, but he is ready for Angel fire) and really hoping they would both qualify for the US Team. After meeting and watching their competition I am convinced that the US has seven racers who are good enough, fast enough and deserve to go to the Worlds. These kids are fast, friendly and great ambassadors for the sport and our country. I hope USA Cycling gets their act together and fills all seven spots we have available instead of only taking a few (the athletes pay their own way). 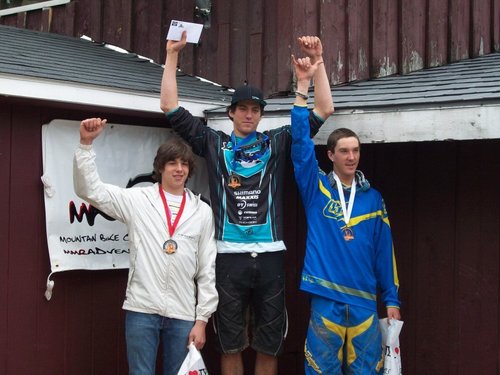 If you would like to join these racers on the podium or simply ride at your best join Gene Hamilton and BetterRide for a skills camp this summer.

About BetterRide:
Gene Hamilton founded BetterRide in 1998 to provide structured, professional mtb skills coaching to racers of all ages. Gene is a licensed USA Cycling Expert Coach and has over 17 years of coaching experience including 11 years coaching mountain biking. Praised for his ability to breakdown skills, demonstrate and explain them so anyone can ride with skill and grace. His coaching highlights include coaching many top pro racers (Chris Van Dine, Chris Canfield, Eli Krahenbuhl, Andrew Pierce, ..) top junior experts (Ben Hulse, Naish Ulmer, Parker Worthington, Graeme Pitts...) and hundreds of weekend warriors looking to have more fun on the trails. Gene is a pretty good racer too, in 13 seasons as a pro downhill racer he has won a Silver (2002) and two Bronze Medals (2006, 1999) at the UCI World Masters Championships. For more information head to www.betterride.net