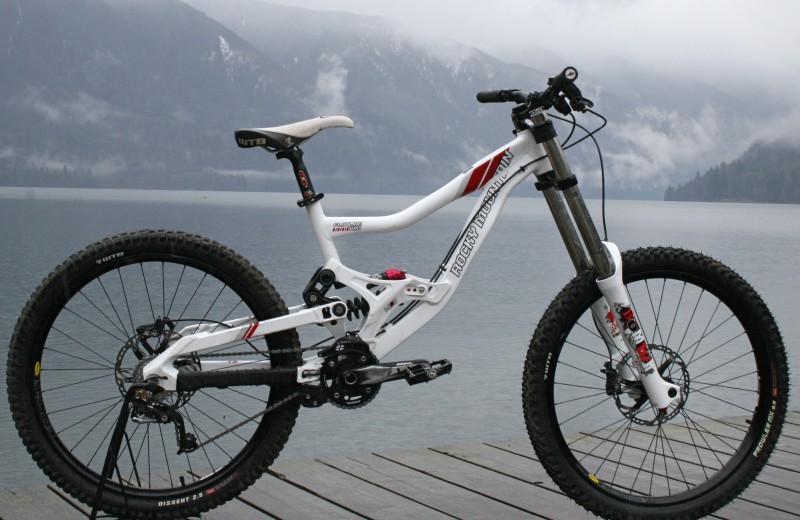 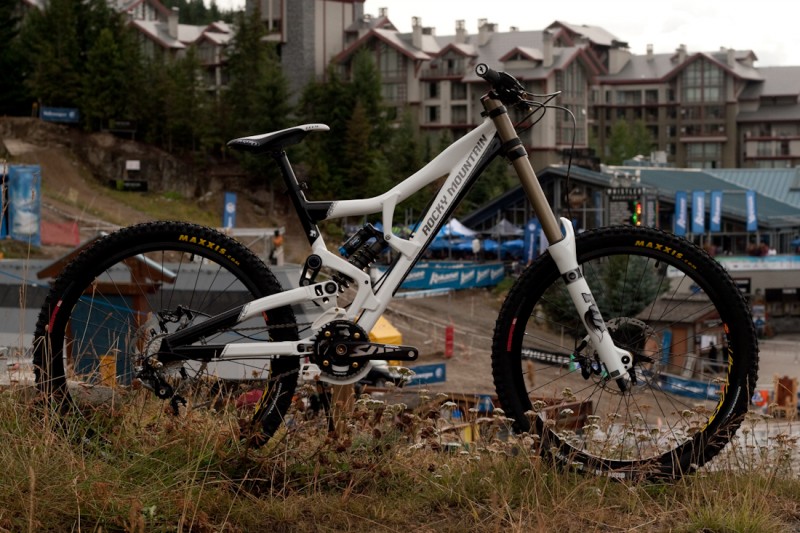 New Flatline World Cup
This new design will not put an end to the previous Flatline design as it will still be available in 2010 as Rockys freeride bike, and labeled the Flatline FR. The Flatline World Cup and Pro feature a refined geometry with input from the Maxxis Rocky Team, integrated headsets, and a specific (non-adjustable) geometry. Also the head tube angle is also effected by the fork length (axle to crown) and with the Flatline's lower stack height you get more adjustment for a steeper or slacker head tube over other bikes, by simply raising or lowering the stanchions. This simple 15mm adjustment will adjust the head tube 1 degree slacker, or steeper.

Changes from previous Flatline
- Complete LC2R suspension design has been re designed for a better shock rates
- Removed 4 bearings from linkage area/replaced with Igus bushings.
- 2 lbs removed off of frame
- Front to Center is 2 inches shorter
- Flattened out the Rates curve for a more progressive suspension
- New rear end is lighter and features built in axle - Compatible with previous Flatline 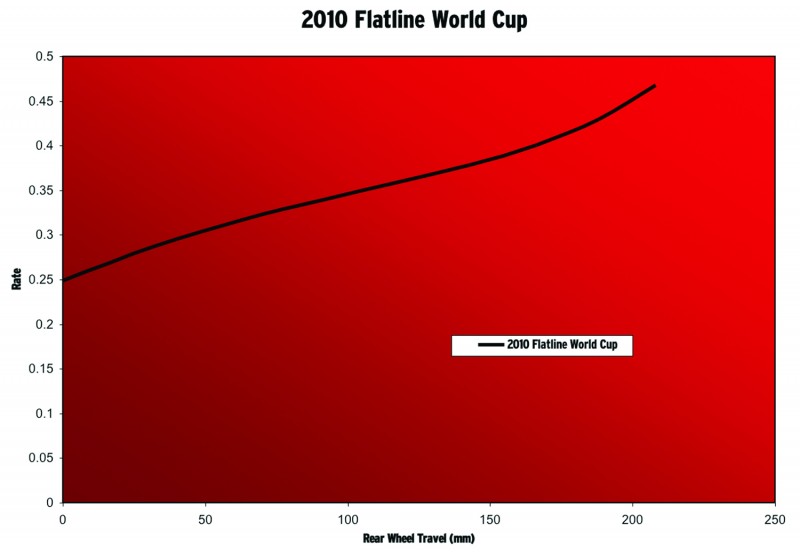 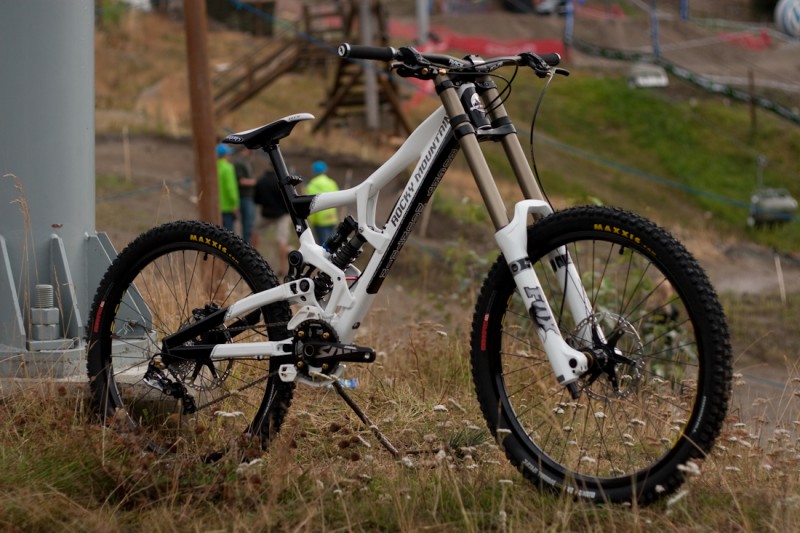 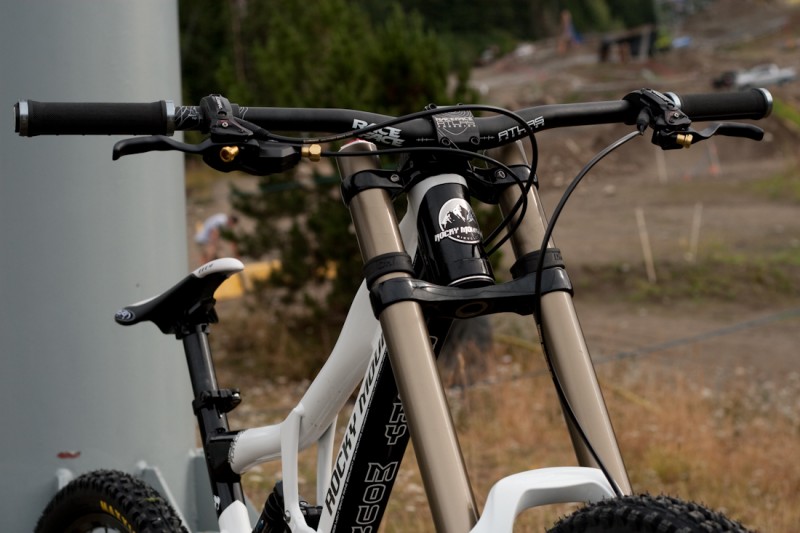 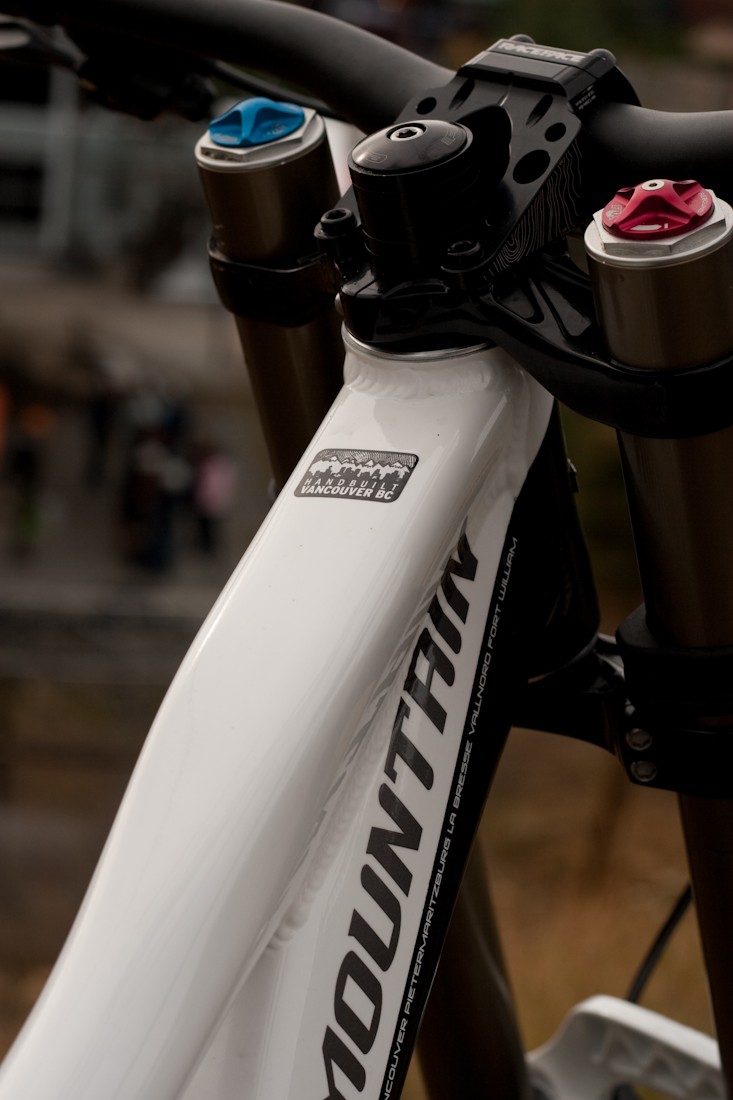 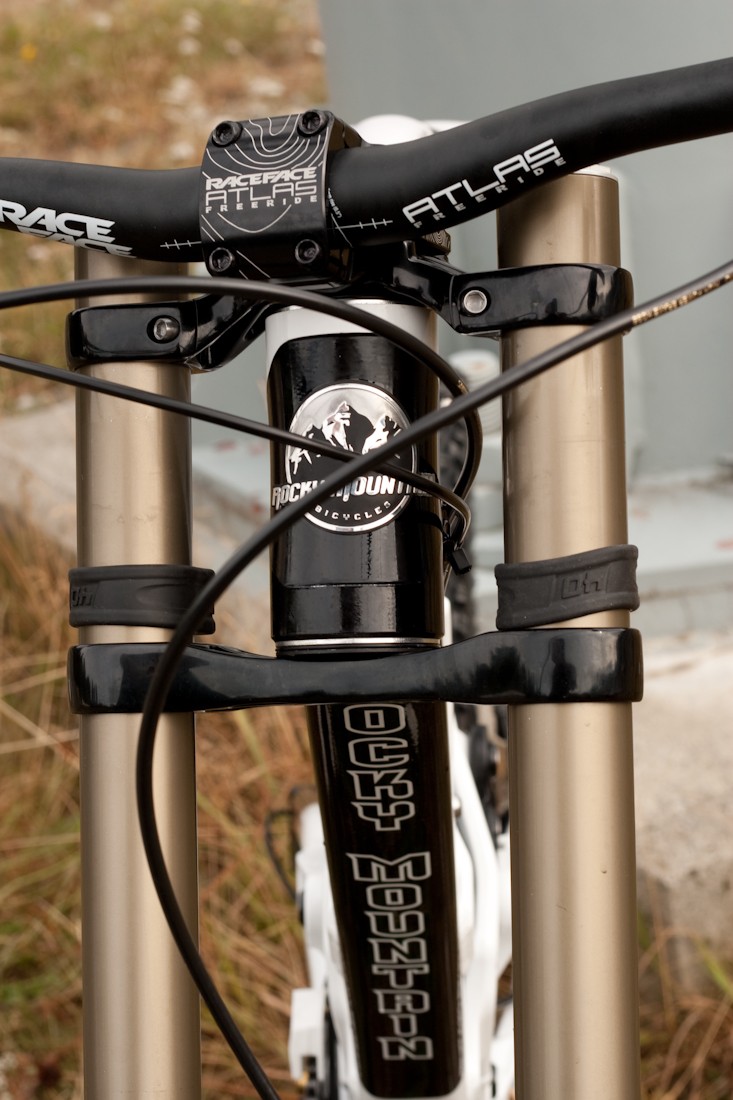 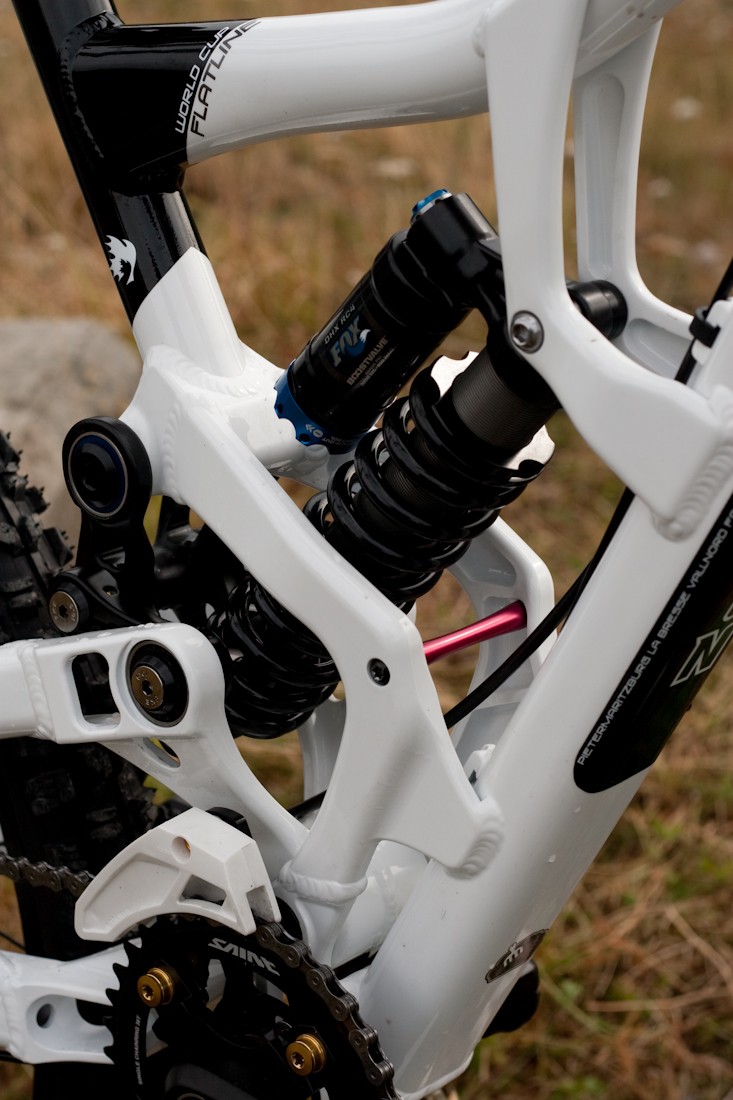 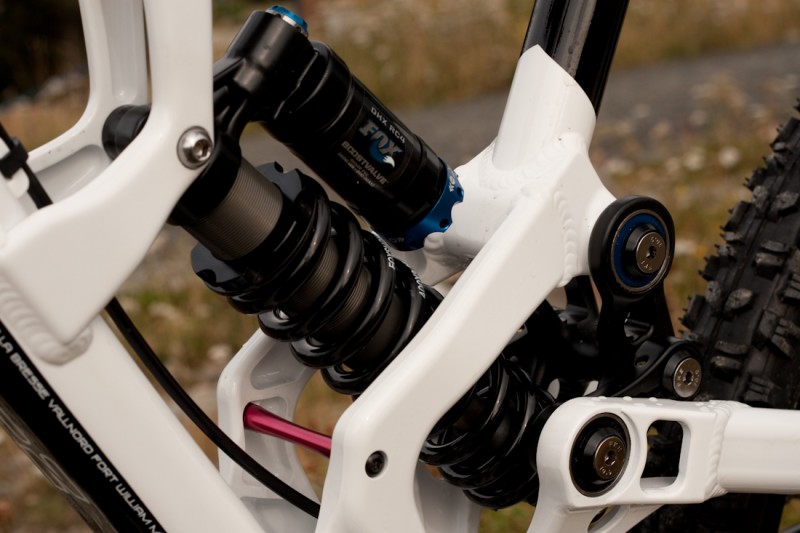 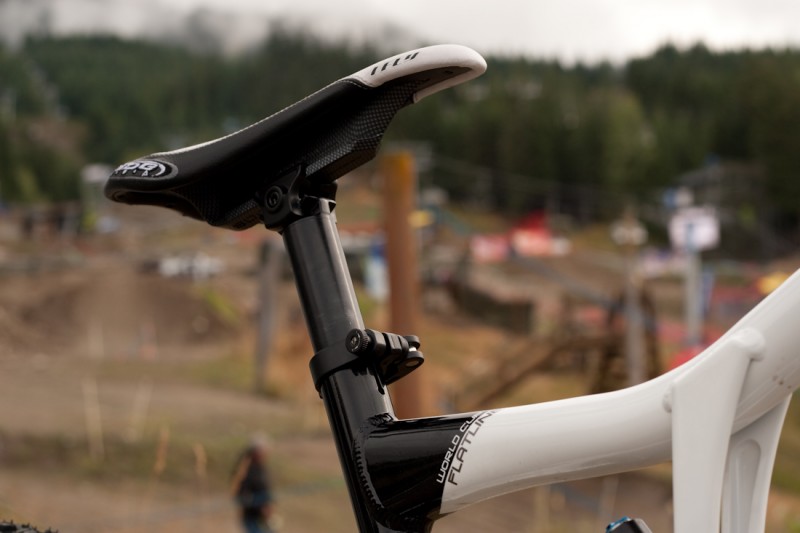 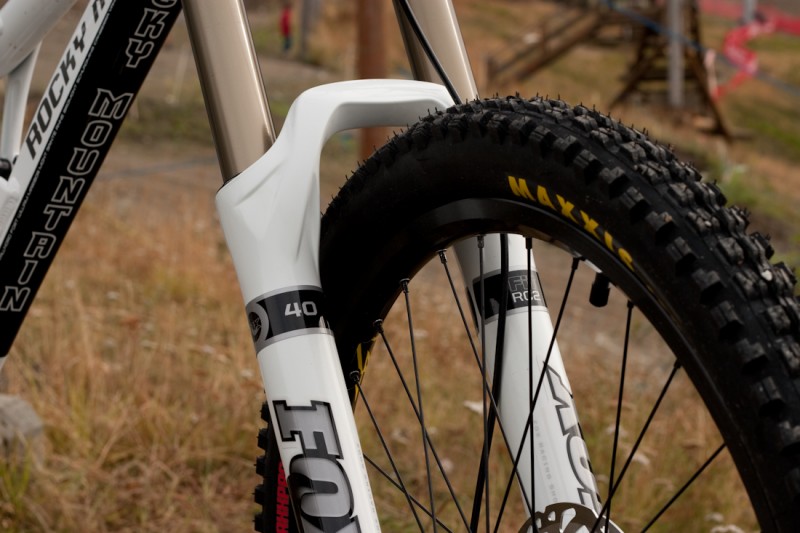 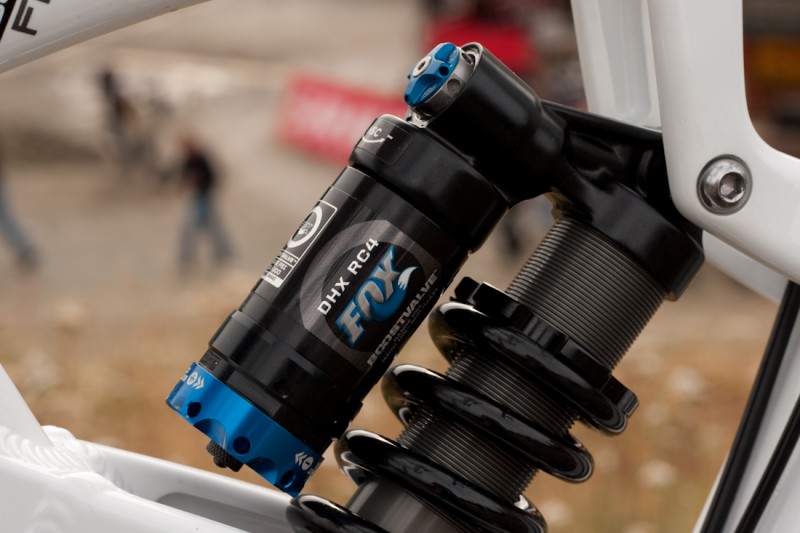 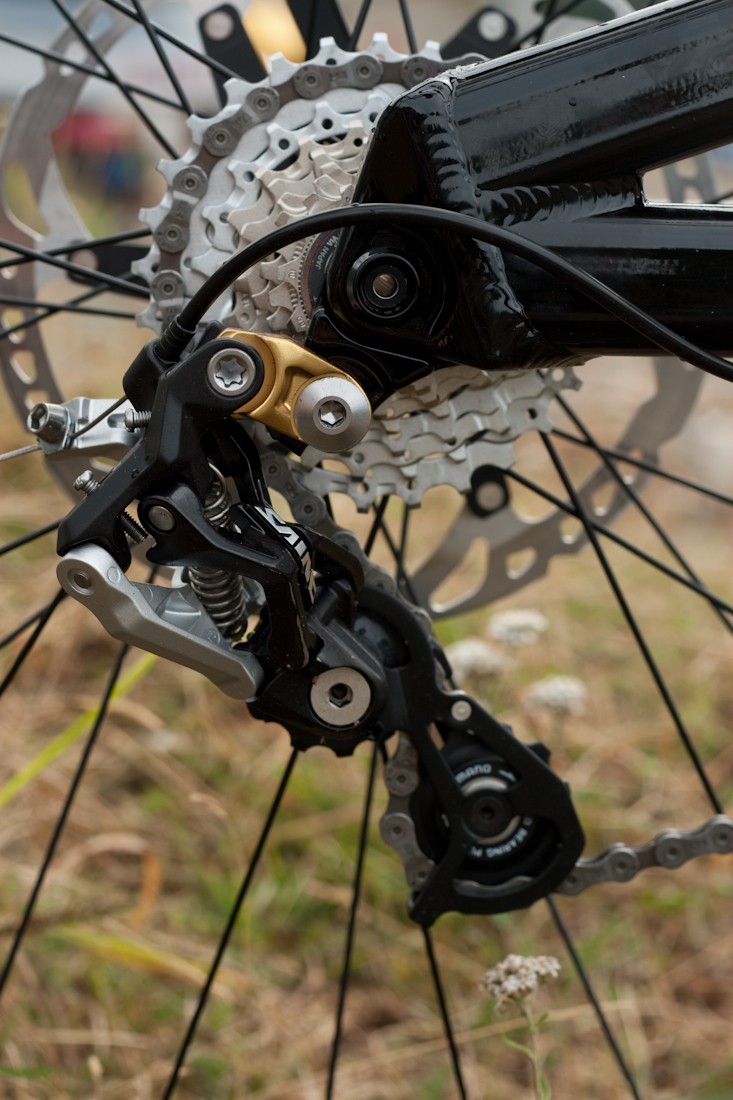 Decal Detail
The 2010 Flatline will be offered in two race ready packages, the Flatline Pro and the Flatline World Cup. The Pro has a SRAM build including a Boxxer Race and Vivid 4.1 rear shock. The World Cup has a Fox and Shimano build, equip with the all new DHX RC4 and the Fox 40 RC2 fork. 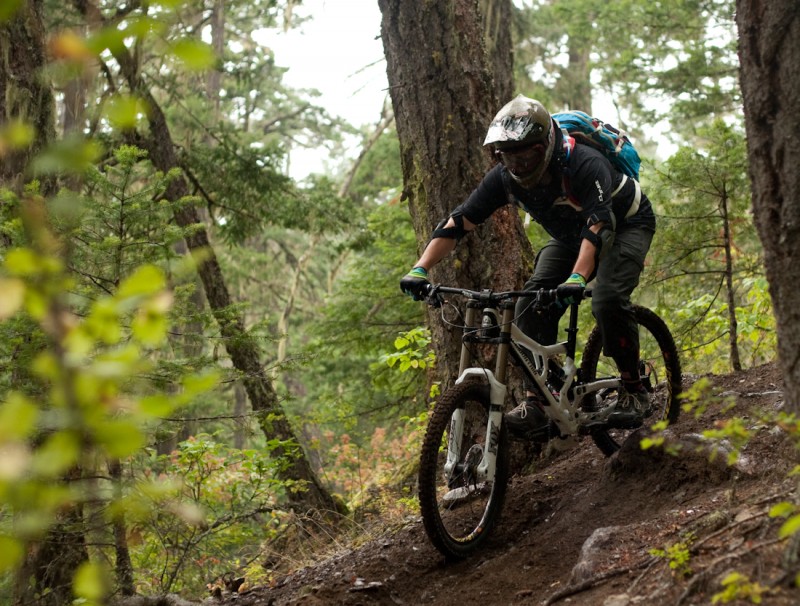 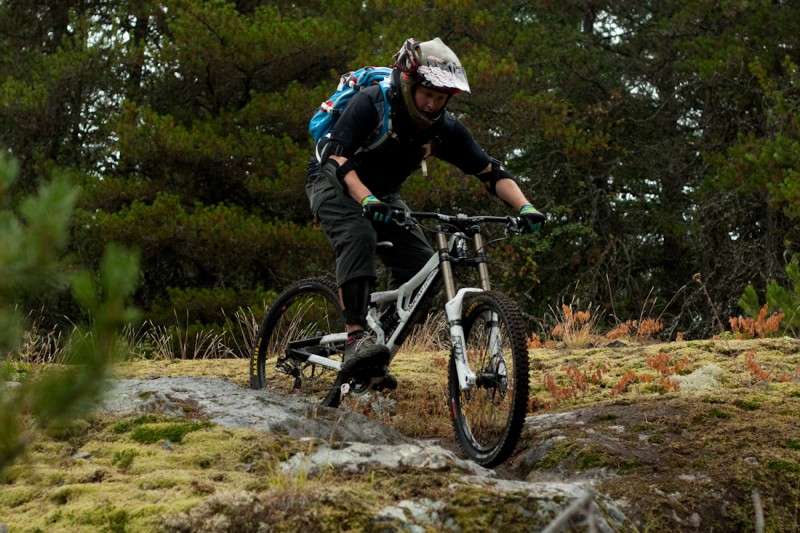 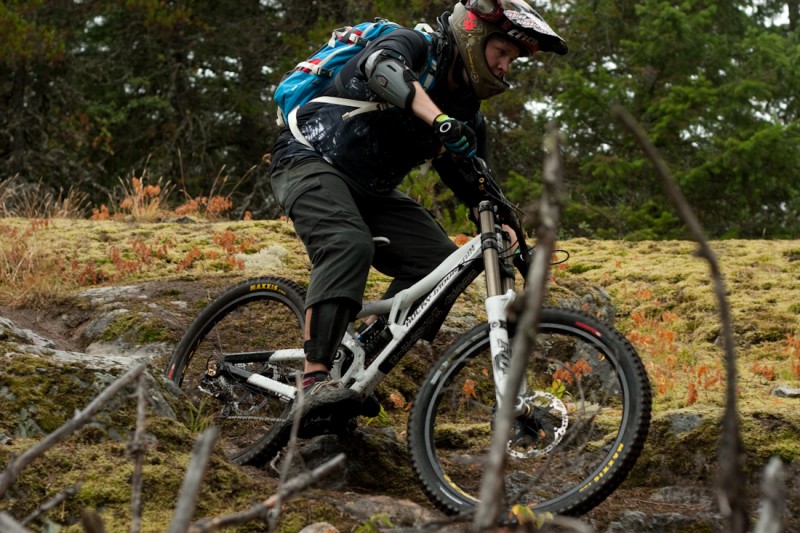 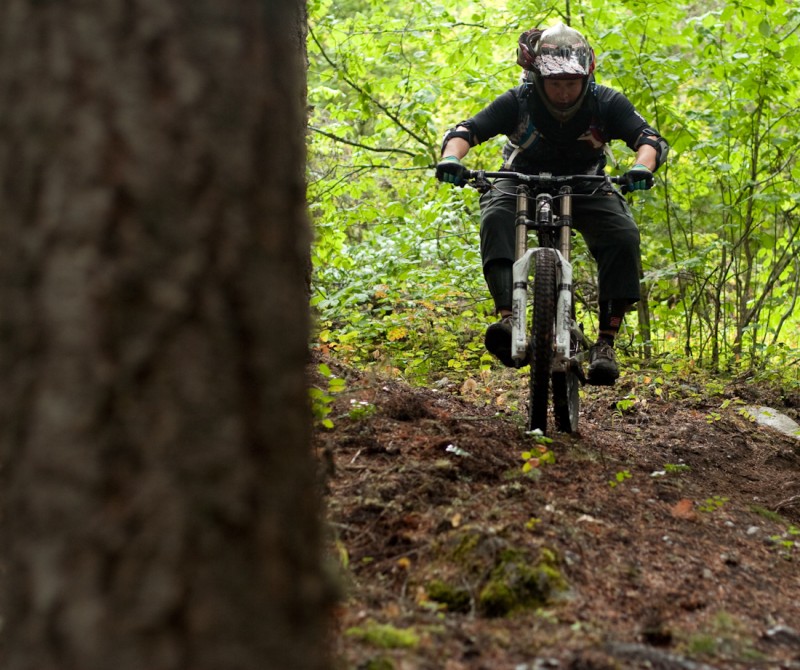 Monster trucking
The Rocky Mountain Flatline launch took place in Pemberton where the trails are confined by tree's and branches, littered with rocks and rough lines, and were slightly damp. The Flatline, despite its 785mm wide bars and slightly steeper head angle felt stable when descending, and not twitchy or unpredictable at high speeds. The new Flatline is 2 inches shorter front to center than the previous frame design, so if you were not planted behind the bike when descending it felt easy to get over the bars in a uncomfortable fashion, this could have been a result of the low stack height. However when you were planted behind the bike descending the front tire tracked fine, while the suspension did all the work to keep you upright.

I got a chance to take the Flatline up into the Whistler Bike Park area for a couple laps on the jump intensive trails, and was impressed with how it rode up there. The Flatlines LC2R suspension design felt great under pre-load and landing of jumps, and still stayed plenty active when it was being piloted over extremely rugged or brake rutted sections.

The Flatline lineup for Rocky Mountain is going to be a contender on the race circuit in the 2010 race season for sure, so if your in the market for a new race bike, or just looking to try something different take a look at the all new Flatline.

Freerideguy14 (Aug 20, 2009 at 22:18)
I like how all 3 of the bikes use different forks. Such as Rockshox, Marzochi, and Fox. The three main fork companies out there I would say (or most popular). Loving the new design too.

radek Mod (Aug 20, 2009 at 22:22)
Not too long ago you used see a bike manufacturer pick a fork/suspension company and pretty much use it exclusively across their whole line. Maybe they got a good deal on the parts if they stuck with the one brand. This year especially, I see a few of the companies pick and choose. In the end that's great because hopefully they can pick the best brand/model of fork for the different bikes. Some years maybe band X makes the best DJ fork, but brand Y makes a better DH fork.

seb-clawhammer (Aug 20, 2009 at 22:07)
Awesome spec on the WC model, saw it here in Whistler last week, not one part on it I would change - very well thought out spec. Interesting that the WC weighs more than the Pro though??

cranxwork (Aug 21, 2009 at 1:55)
Would it be possible to get this as frame only because I love everything about it but if I got a new bike it would probably just be the frame. How much would that be? Every comment on here is positive this bike is obviously pretty dialled.

skatejunkie (Aug 20, 2009 at 22:17)
Sweet, they finally make a legit DH race bike I saw Sabrina riding the new frame a long time ago at Fontana and Sea Otter, I was wondering when they would make it official

brajal (Aug 21, 2009 at 6:31)
Visually I prefer the "old" design, much cleaner and dynamic/futuristic lines on the frame. And it seems to have a lower center of gravity though . But if the new one is lighter and works better...

Decibelchild (Jul 13, 2021 at 23:15)
People love my 09 pro with the modern paint and modern parts, majority of the generation has never seen anything like it so it grabs attention, that and the hyper green with deep teal color

oceen246 (Aug 21, 2009 at 10:47)
Thank god they left out the stupid hydro form alien downtube. I had no idea why so many manufacturer were (and some still are caught norco caught)crazy about those.
Screw organic forms. This new one looks so much better!

The orig. Flatlines were longer and lower than the RMX - which made them better for hauling ass down a mountain.

But the new 2010 Flatlines now have a tad shorter wheelbase? Are they a bit taller, too? This would make me think they'll handle more like the orig. RMXs?

Any commentary appreciated as I'm on the fence over which model to get...an '09 FL Pro or 2010 Pro (I realize the specs aren't apple to apple)...

CrashAB (Oct 22, 2010 at 12:19)
Had a chance to demo the Pro at Fernie - cant say enough good things about it. Bomber setup, but still nimble. The weight difference vs. the FR model is shocking when compared side by side on the same trail. The saint components are worth the extra bit of weight - god i love those brakes.

radatabs (Aug 21, 2009 at 1:51)
the new flatline is actually really beautiful but for everyone complaining about the weight the fox 40's are heavier than the race's and iv not worked it out but im pretty sure the wheelset will be heavier and the headtube on the world cup is 1.5 rather than 1 1/8 meaning that will be heavier and also surely everyone knows that saint is quite a heavy group kit even though its the best!

DARKSTAR63 (Aug 21, 2009 at 5:19)
Looks great. I might be in the minority but Im glad they are keeping the Flatline "FR" I like that one alot too. I have ridden Rocky Mountain's since 2000 and would never buy anything else, thanks for keeping it real RM!!

gustofwind (Aug 21, 2009 at 8:51)
personal preference i guess...seeing as i'm a racer, i think the new one looks wayyyyyyyyyyy better.

Decibelchild (Jul 13, 2021 at 23:19)
@DARKSTAR63: there are actually some guys that strap water bottles to parts of their bike when racing downhill, lighter is not always better and the weight distribution and length of the original was perfect, they came in extra sizes so you can choose to size down and get the length you want

ColetrainLeGrillz (Aug 21, 2009 at 17:27)
a huge part of the weight loss was probably switching from wtb to maxxis.
serious when i took the prowlers off and replaced them with the maxxis advantage on my slayer, it lost 3/4 of a pound.

faakjoo (Aug 21, 2009 at 9:59)
Yes, the new Flatline frames will be made right here in Vancouver along with Element Team.

bradchills (Aug 23, 2009 at 19:58)
sooo much nicer than last year. the new frame and specs are great. the old flat line frame looked like it was already broken... looks great this year though

norcalassassin (Dec 6, 2009 at 21:01)
glad they are going back to making the flatlines in vancouver instead of taiwan

bikrboij (Aug 20, 2009 at 22:32)
I don't see anything too obvious besides the fork, I'm clueless to the weights of the rc4 vs vivid, saint vs elixer but I can imagine a lot of the weight maybe coming from "durable" parts throughout the bike like the handlebars, rims, spokes, brakes, cassette etc...I guess it all adds up

camm67 (Aug 20, 2009 at 22:43)
Wow 7lbs, that's a huge slim down. That bike looks sweet, we'll just have to see how long before those bushings start complaining under heavy usage though.

spoiledgoods (Aug 21, 2009 at 9:48)
The head R&D Engineer at Rocky informed me he has been running them in his rig for the complete 2009 season now and has not had any issues. Pretty reassuring.

cazneaux (Aug 24, 2009 at 13:35)
The new one does look soo sick though. I want to see how it holds up after a few months of pounding. Oh! and no one ever answered my question.
How much travel dose the new one have?

your v10 may be better than my rocky, but i didnt drop stupid amounts of money to buy it, and its all about the amount that you push it to. look at the evil revolt...sickest bike on the market by far. guess what? 8 inches of travel.

cazneaux (Aug 24, 2009 at 18:31)
sorry man dont get all menopausal on me I just like the back up two inches. I don't see why your getting all butt hurt about this and neg propping me. I really dont give a fuck.

spoiledgoods (Aug 21, 2009 at 15:55)
Sammo,
I cannot answer your question directly, however, I do know Rocky is currently working on a floating brake setup for the Flatline.

Cliff-Huxtable (Aug 21, 2009 at 9:53)
i dont like how they raised the angle up on the rear shock. i like last years style, low in the frame for a lower center of gravity.

radek Mod (Aug 21, 2009 at 11:25)
Since they removed the bow in the down tube and also shortened the front to center distance by 2 inches, looks like they also needed to mount that shock higher up just to fit it in. Is it still the same eye to eye? It almost looks longer.

doxx (Aug 23, 2009 at 11:30)
I dont see any flat bars on these flatline. Thay are low rise bar and it's totally usefull for DH racing. No one longer runs 50mm rise bars on a dh race bike. I i think it looks much bette that way.