Join Pinkbike  Login
45 Comments
Jared Graves has won the 2011 Sea Otter Downhill, followed by Andrew Neethling in second and Tyler Immer in third. On the womens side Melissa Buhl avenged her loss in the dual slalom yesterday and beat out Jill Kintner for the win. Miranda Miller was third, followed by 16 year old Cierra Smith in fourth.

With most of the major pro teams already in South Africa for the first World Cup of the Season next weekend the field at this years event was pretty thin. Transition and Giant and Yeti were the only pro teams at the event this year on the gravity side, and while they did well here at Sea Otter they'll be arriving in SA with barely a day to recover from the 20+ hour flight and the 9 hour time change. It will be interesting to see how they fare against the other teams that have already been there for a week or more training.

Graves and Buhl both won decisively, Graves by over 3 seconds, Buhl by 2. 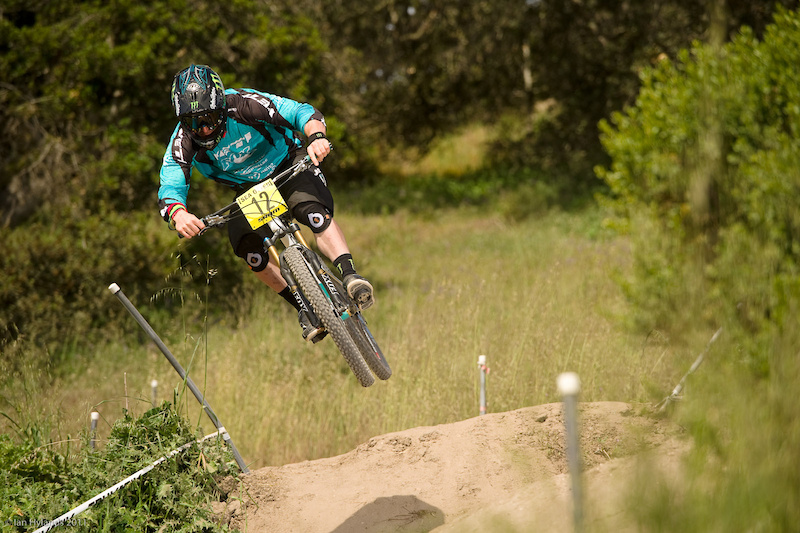 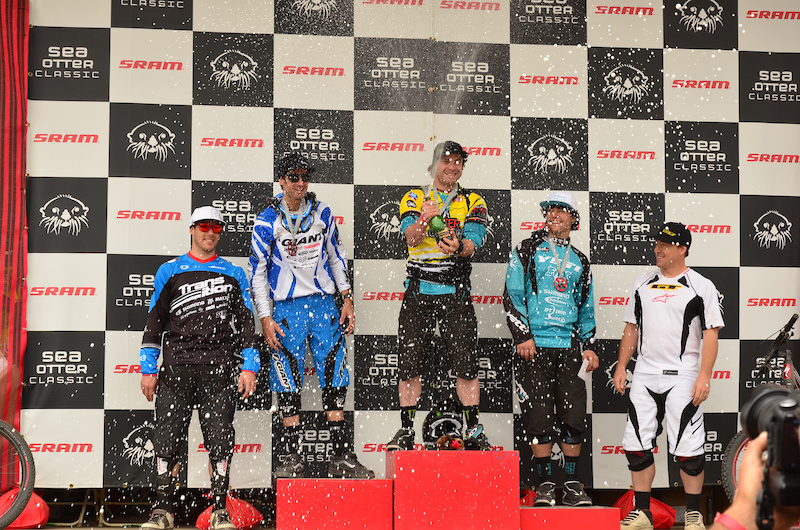 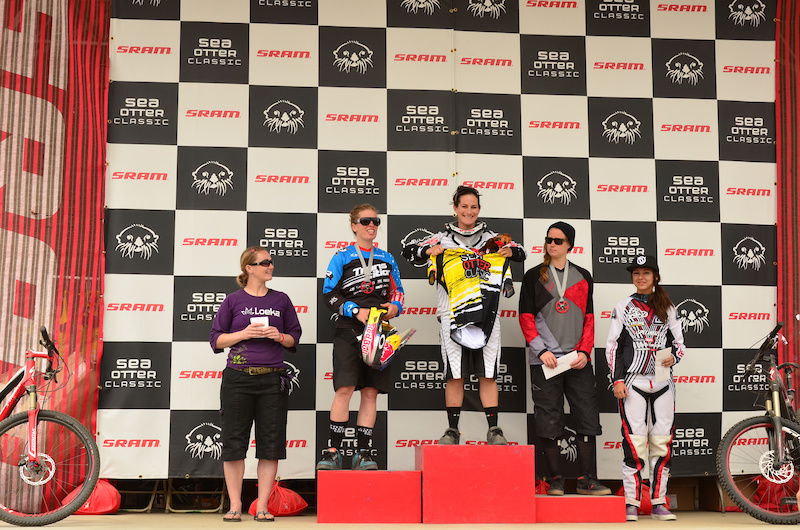 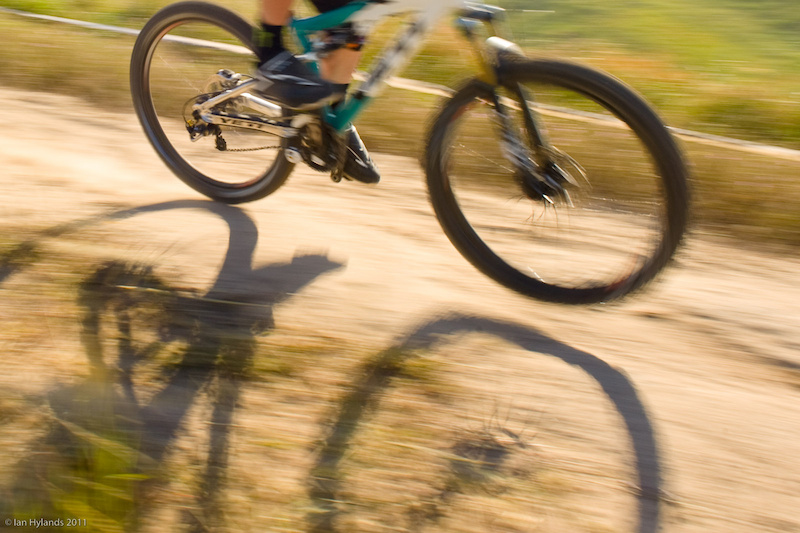 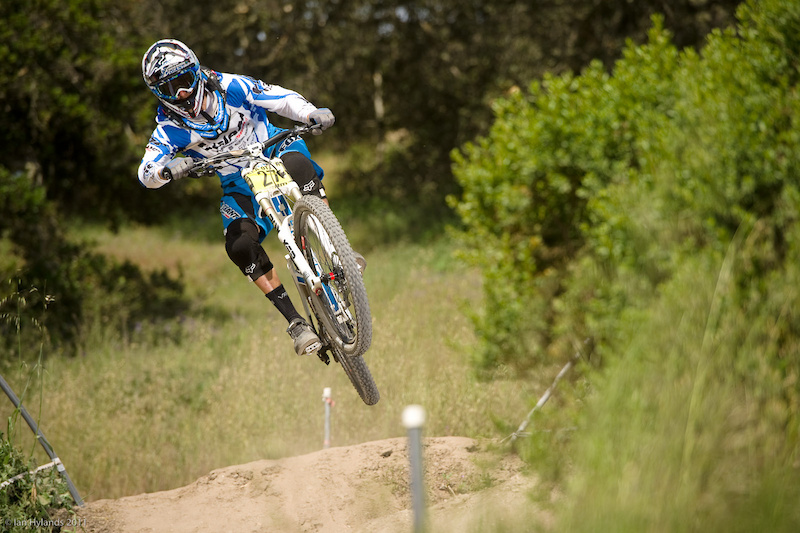 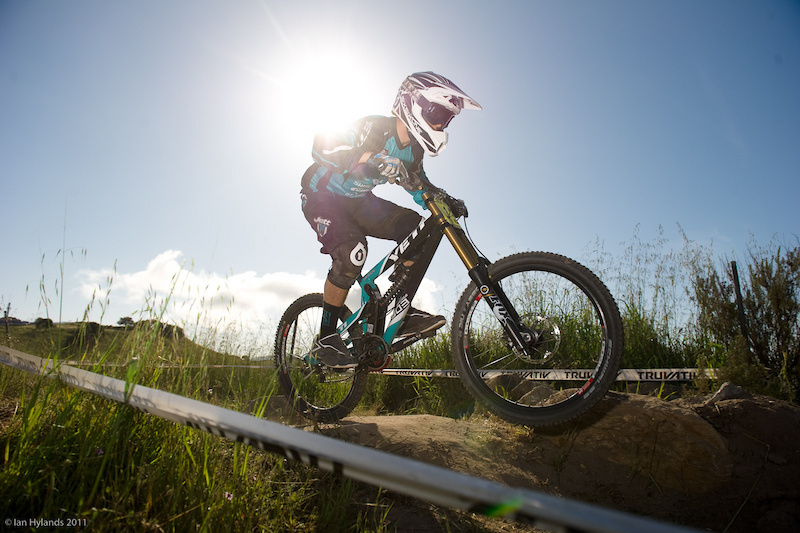 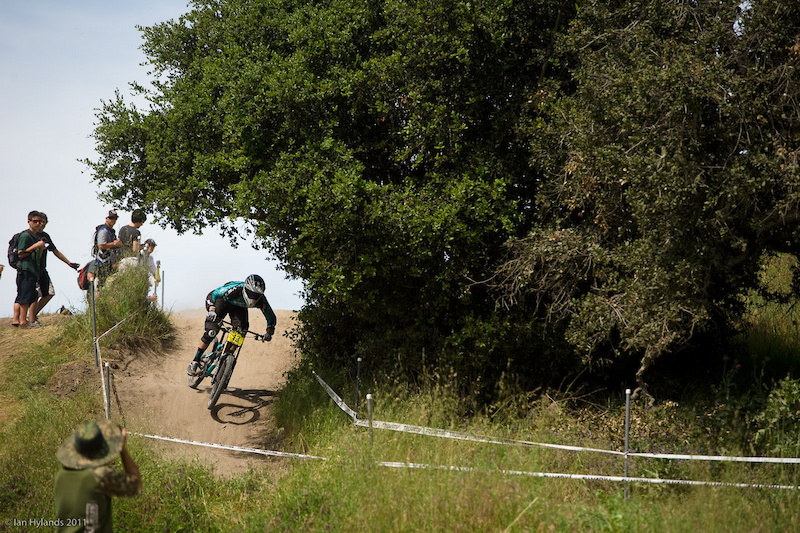 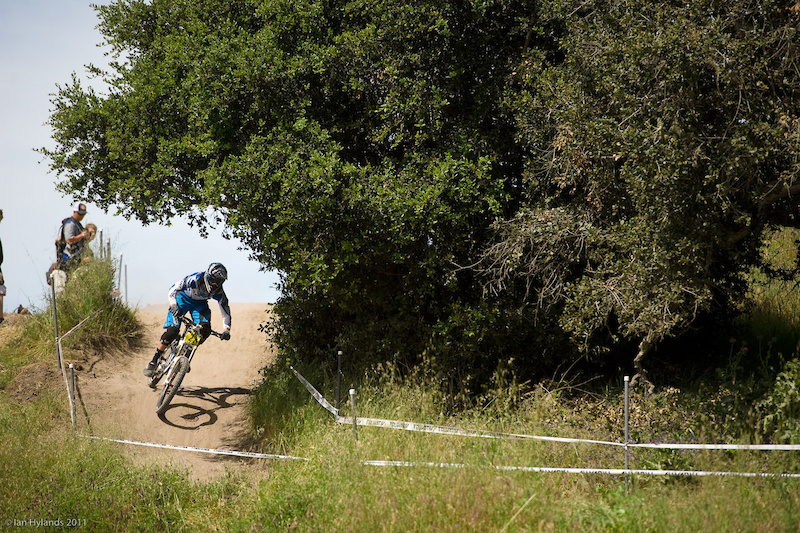 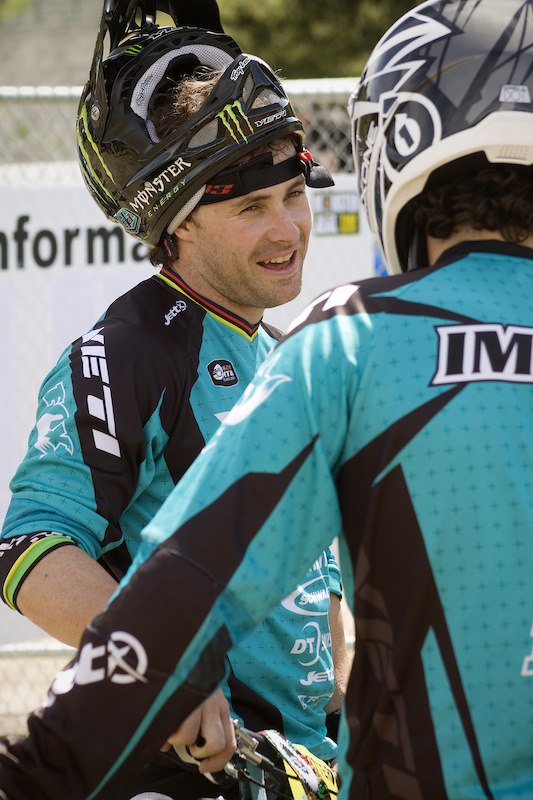 Graves and Immer stoked after the race... 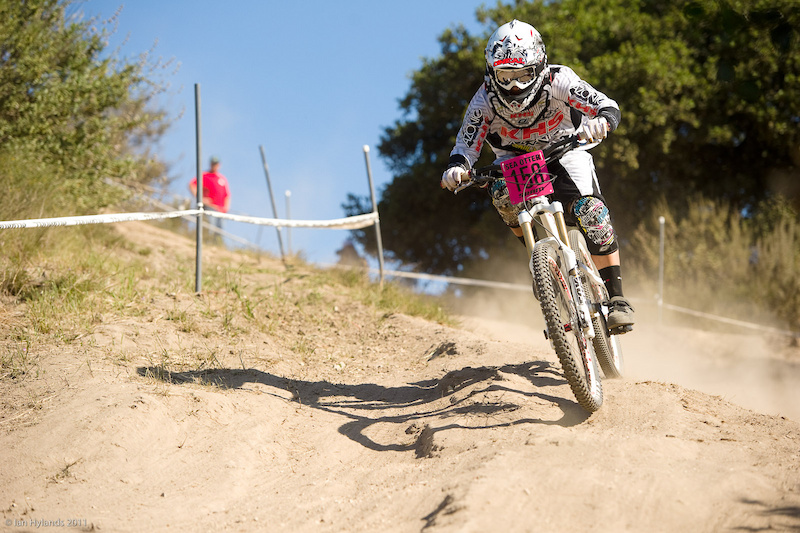 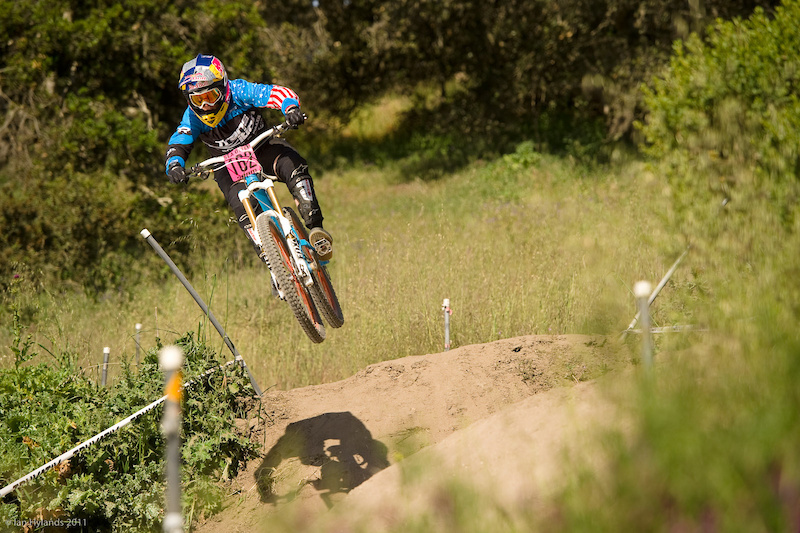 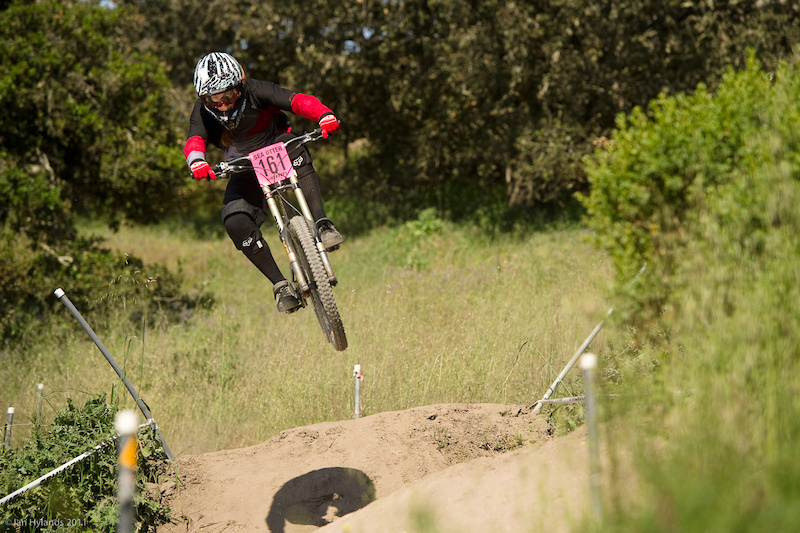 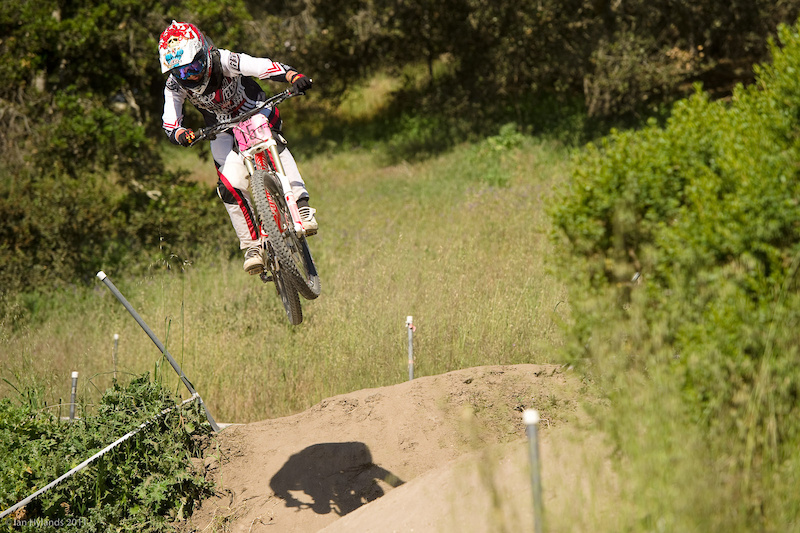 hoolydooly (Apr 17, 2011 at 16:27)
haha, no mate. graves dominates downhill. in 2009 he won the 4x and then the next day went out onto the DH track and with little to no practice he got 12, at the world championships. so happy he is focusing on DH next year,

Looks like Danny was celebrating a little too much through the week doh! saying that with WC this weekend who really cares? S.A is where its at.

But seriously this is not DH and the results are nothing to get wet over, seriously they just prove that! Why the other big names aren't even they're its no preparation for the WC!

Big Graves fan and cool to see him take the win on a serious DH bike what? but Sea Otter really call it what it is, BMX run in a DH formatt!!

mammal (Apr 19, 2011 at 10:49)
Wow. Only in the last couple of years have I noticed MIRANDA MILLER IS KILLING IT! I used to see her when I was racing BC Cups back in the day and she was being coached by Shaums March. She's placing great at major races... we have some pretty great up and coming chicks in this province! I'm proud.

scottchris (Apr 17, 2011 at 12:56)
that looks like a track worth pinning all day long in the sun then after for a awesome bbq and a beer after shweet...congrats to jared too.

krazieghost (Apr 18, 2011 at 9:41)
cierra smith being so young and still powering through a pedally course with some older 'vets'..pretty savage

kaibrabo (Apr 17, 2011 at 13:03)
Giant and Yeti are the only 2 factory WC teams here. Everyone else is in RSA, and i hope there isnt another RSA WC anymore. it takes away from Sea otter and its greatness

swan3609 (Apr 17, 2011 at 13:13)
The fact that Graves has won on a short travel bike two year in a row really shows that the Otter is not really a true DH course.. its just a preseason race to show off to everyone... along with an opportunity for media coverage..

kaibrabo (Apr 17, 2011 at 13:46)
i love the WC's tho, but nothing compares to Sea Otter...well Crankworx does, but thats it. Almost every venue you can think of was in Monterey this weekend and this is the time of the year to see the Pro's before they head off. The SO, DH course is like a rough slalom course. Your interpretation of a "True" dh course is full of rocks and roots and tech. Monterey's landscape is sandy dirt, low trees and lots of open grass fields. Give it what its worth and all the riders are tested on this course if you think about it because they are still racing against eachother none-the-less.

Windigo (Apr 17, 2011 at 14:40)
Nice points kaibrabo. I notice that some of the podium places happened on DH bikes. I've heard or read some people suggest the riders are on a DH bike because the sponsor wants that. But look at Yeti: Graves 1st on 4x bike, Immer 3d on DH bike. It may not be the most technical course they race, but then neither are some of the rounds of the DH World Cup... Willingen was really BMXy several years back and I remember Kovarik on a single crown also the Worlds at Canberra had Barel on a single crown. Monterey isn't in the Alps so it can't be expected to provide super-steep rocky technical terrain.

Swabiantreehuger (Apr 17, 2011 at 14:41)
Steve Peat was in Todtnau in the lovely Black Forrest, rippin the DH and drinking beers =)

UncleCliffy (Apr 17, 2011 at 14:49)
I love how people miss the point of this event. The venue has to cater to every event. Road, XC, dirt jumping, ect. Maybe a volcano will sprout out of the ocean this year and they can build a downhill course on it? Sheesh.

swan3609 (Apr 17, 2011 at 23:55)
I wasnt saying that it isnt a killer event.. I guarantee that it is probably the greatest event out there.. its like interbike but with races and a waay cooler vibe.. I am just saying that you cant take the DH seriously.. The Dh at the otter is just a preseason race for the pros to show their new stuff and a chance for mass media coverage.. Its not one that should really be counted overly seriously.. I dont doubt that the promoters did the best with what they had for a course.. and it sounds like its easy for most "average" people to go and race on where a "real" dh course would hand most "average" racers their asses... which is probably another great point about the Otter, you get to stack yourself up against the Pros.. Killer Venue, Just dont look at the DH race as a major race that is anything other then a media show..

IanHylands (Apr 19, 2011 at 20:48)
sorry, unfortunately if we start posting results for every category the page would be endless. And there is no way to shoot photos of every category in all the events, the schedule just doesn't allow it.

bighit-ben (Apr 17, 2011 at 16:53)
gee would get smashed by graves. the track isnt very dh suited (atleast by a world cup standard), a bit closer to a long 4x track.. and you're saying gee would beat graves, whose dominated 4x over the last couple years and can easily hold his own in dh without training??

3 graves, without a doubt one of the top all round riders out!