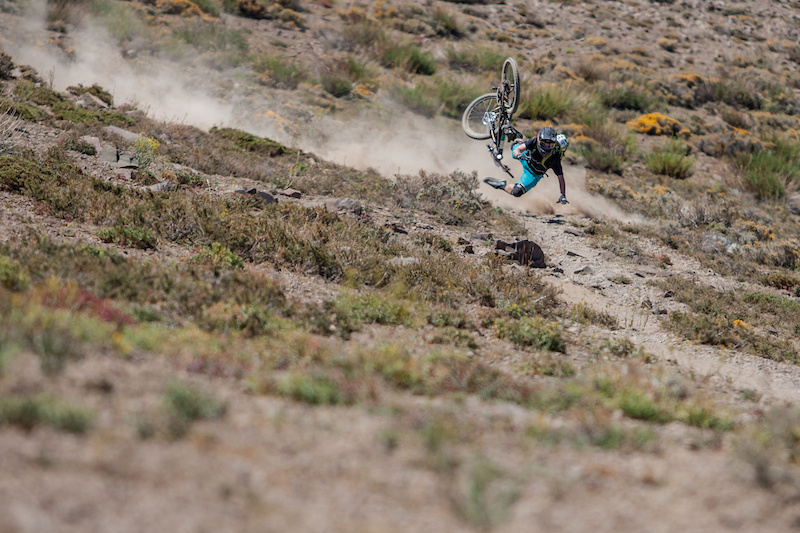 Today marked the first day of competition of Andes Pacifico. The first thing everyone asked in the morning was "how did you sleep?" Obviously no one slept because everybody was anxious! At 7:30am competitors began to make thier way to the Aguila lift at the La Parva Ski Center which is 2800 meters high. The lift leads to an area called Piuquenes that then goes on to Valle Amarillo.

Special Stage One began with a fast section which then went into very loose singletrack or #antigrip followed by a rocky area with several little drops that a few riders crashed on before they realised what was happening. Then the track ended with a section of more than 30 switchbacks which is known to burn the brakes. This gave the riders an idea of what was coming for the rest of the day - very loose and dusty terrain and long, long descents.

Special Stage Two began with a nice open and flowy trail which allowed the riders to go very fast. Our friend Chris Ball told us that he loved this stage, the fluidity of the trail and the wide open views which allowed you to see the immensity of the Andes.

Special Stage Three is a classic for any enduro or downhill rider in Chile. We are talking about the famous Curve 16 and Curve 14 which today, for the second time in the history, were used in competition. These two trails made ​​the Special last almost seven minutes and included the infamous and gruelling uphill on turn 14. The trails had lots of stones and ditches as they always do but which are larger than normal of late. This made riders sweat. At the end of this Special was a food station with fruit, sandwiches and Red Bull as well as a Santa Cruz and Mountain Works mechanical station. 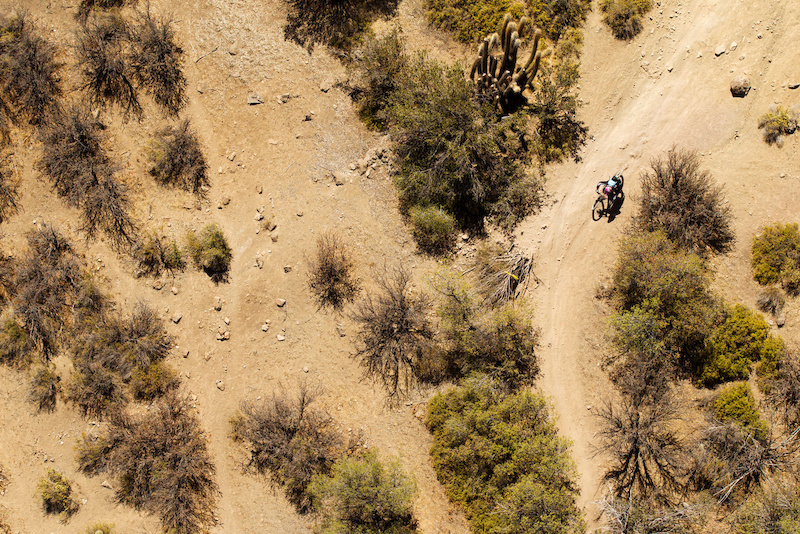 Then came the longest liason and the biggest uphill of all the race. 1200 meters of altitude made all the competitors suffer and Sven Martin even mentioned that bikes should have a motor to do that type of climb. But all this effort had a reward which was Special Stage Four - Nido de Condores, Santuario. This stage would drain the remaining energy of the riders and they all unanimously agreed that this Special was the most complex of the day with the 1,100 meters of vertical and a 16 minute duration which left everyone exhausted. 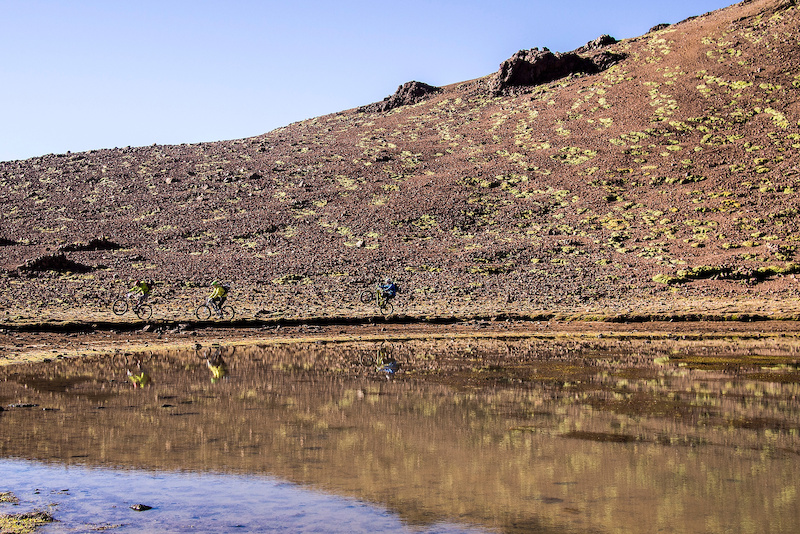 The day ended in the picnic area of ​​the Nature Sanctuary where the river was used to relieve muscles and even clean the bikes of their accumulated dust.

The winner of the day was the World Champion Jerome Clementz who took the lead with 45:29 minutes to the Chilean National Champion Nico Prudencio who came in at 46:23 minutes. Third place went to François Bailly- Maitre with a time of 47:27 minutes. 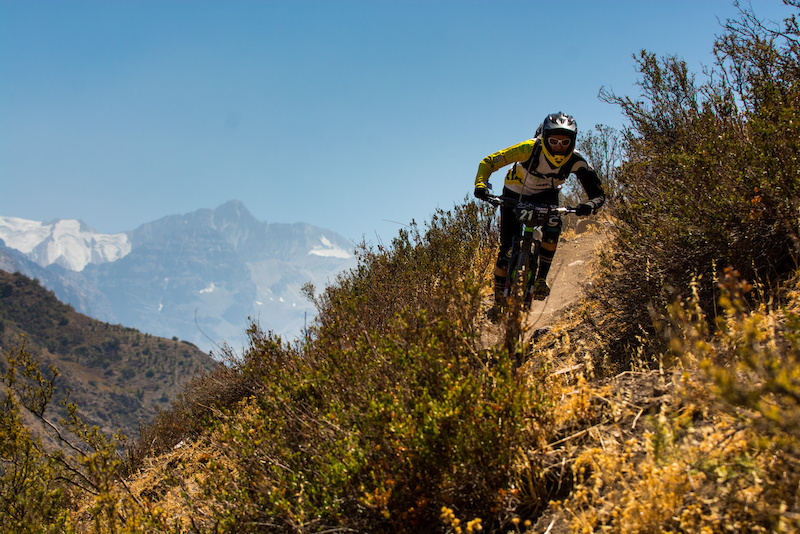 wtf does that mean? Who cares! It's the Olympics! IOC is the best!

jaybird951 (Feb 13, 2014 at 5:58)
someone said "Snowboarding for 2014 Olympics" and look what happened! hotels with two toilets, crappy snowmaking, and improperly lit olympic rings that look like melted snowflakes! Leave it alone. Keep it on the trails!

gravitysgirl (Feb 13, 2014 at 7:21)
Let's have an update on the women's standings in the next report please, I know they're there, please mention them!!

krisrayner (Feb 12, 2014 at 22:01)
Jerome is a machine. Doesn't matter the elevation or trail, he just shreds it. So consistent too. I think it's gonna be a couple more years before anyone in the EWS will take his title.

jftoha (Feb 13, 2014 at 4:18)
Yes, he has been on a 650B since the end of the 2013 EWS. Clearly the guy prefers 26" but I am sure the pressures of Cannondale marketing machine are too much. I wonder what Jared Graves will do, since Yeti does not seem to have a proper replacement for what seems to be one of the very best all around bikes out there, the SB66 Carbon. Apparently the SB75 is not even close to it.

Idaho (Feb 13, 2014 at 8:19)
If i recall correctly from a Vital MTB interview with him after he won the XC race in Australia a few months back, Jared made it clear he would be riding the SB66 if he has the preference when he was asked about the 75 during the interview.

michibretz (Feb 13, 2014 at 11:57)
big wheels are mostly marketing! intended to make everyone buy new bikes so why even look for a replacement of a perfect bike with something inferior if its about racing performance?
Pretty much all the "positive" effects like stability can be achieved with clever frame design and geometry as well without the downside of weak and soft or at the same stiffness significantly heavier and slower accelerating big wheel buts its simpler to tell people that something is all new and improved if there is something so visible like bigger wheels on a bike vs. half a degree flatter head angle and get them to swipe their credit cards.

So dear yetis, if you read any of these blogs pleas keep the SB66 as it is, I will need another one for next season once my current one is worn out...

drivereight (Feb 13, 2014 at 13:00)
I thought for a minute it was XC with all the climbing, then I read there were little drops and was called Enduro!

drivereight (Feb 13, 2014 at 13:24)
I was XC racer before I became a DH racer...I ride my DH bike, not push up hill on the same trails everyone rides at Demo in Santa Cruz. I don't care for Enduro, I just ride my Mt. Bike. Not everything has to be a race.