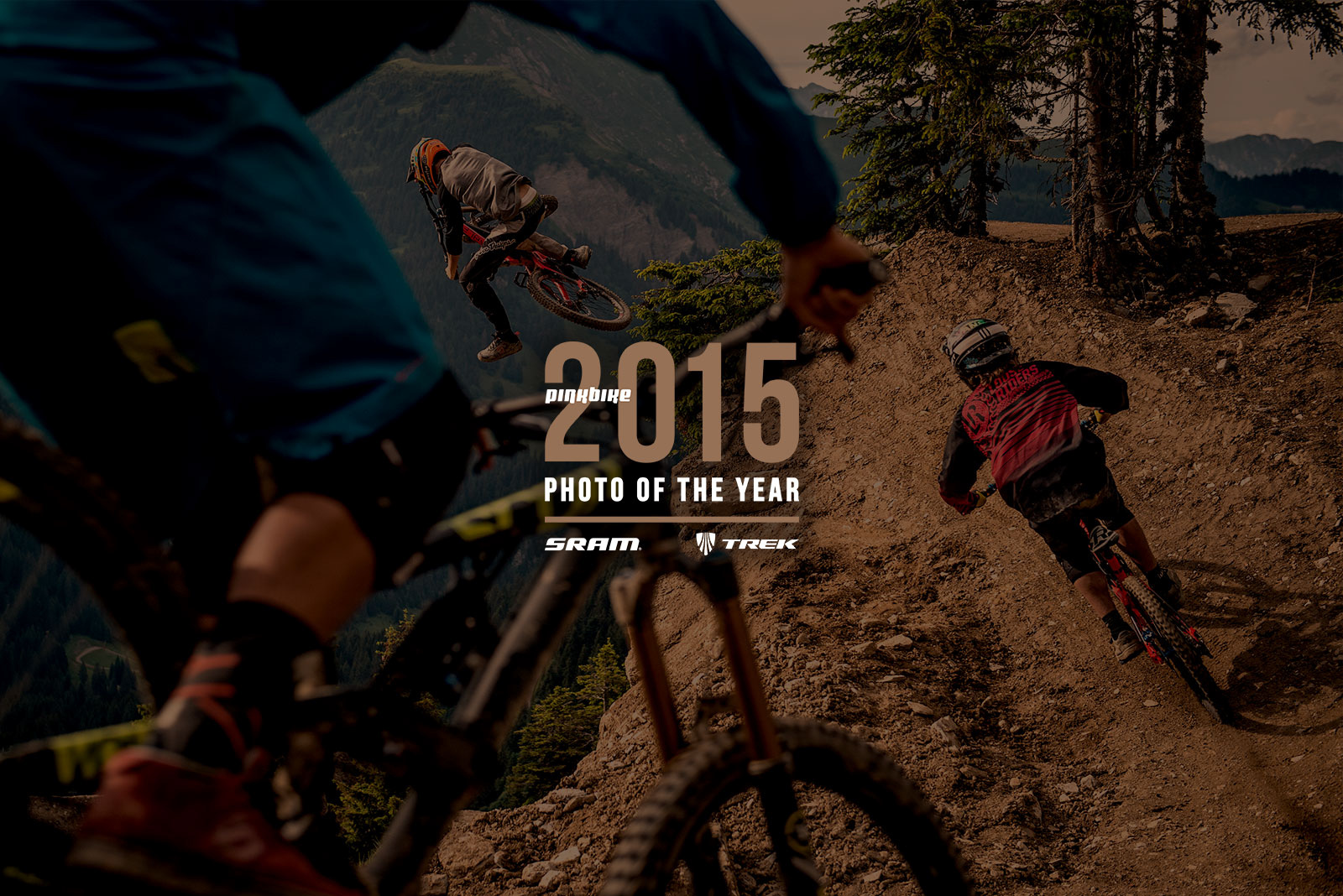 There is $20,000 in cash and prizes on the line in the 2015 Trek Photo of the Year Powered by SRAM, so get ready to nominate your favorite pictures.
What's at stake? $10,000 Cash and $10,000+ in Prizing
The 5th annual Pinkbike Photo of the Year Contest is coming fast. The winner will join John Wellburn, Toby Cowley, Sterling Lorence and Christoph Laue in the PB Photo of the Year Hall of Fame and they could walk away with $10,000 cash.

Think you have a banger? This is your chance to see how you stack up against the best mountain bike photographers in the world. Just upload your shot and you can nominate up to three photos of your own or from other photographers for entry into the competition. Last year, 2956 photos were nominated and 244,372 votes were cast until ultimately only one image was chosen. This year's total is sure to be even bigger. You have until January 20th, 2016 to nominate your favorite shots. The photo of the year will now be part of the Pinkbike MTB awards with the winner grabbing not only the title but also the trophy.

How Does it Work?

All photos taken and uploaded this year that are nominated by users are eligible. So upload your photos now to enter. Each Pinkbike user can nominate up to 3 different photos into the contest (see how to nominate below). The judges will then spend several sleepless nights narrowing the nominated photos down to 32, after which we will open things up to the public. We will pit each photo randomly against another photo in a college basketball bracket-like showdown. At this point, users will vote on the match ups and the photo with the most votes will move onto the next round. So 32 photos will narrow down to 16, then 8, 4, 2 until there is a single photo deemed 2015 Trek Photo of the Year Powered by SRAM. Deadline for nominations is January 20th, 2016.

The winner will receive a cheque for $10,000 for being chosen your favorite image of 2015.

That's not all!
One lucky voter will be taking home a Trek Remedy 9.9 complete with the newest SRAM kit and riding gear from Bontrager.

Thanks to Trek Bikes and SRAM.

Posted In:
Other Trek SRAM Sponsored

LittleDominic (Dec 9, 2015 at 17:09)
The photographers really need to make it easier to buy prints. I've seen a lot of pictures in the past on this website that I would purchase a high quality print of. Most of the time the photographer has no option on their website to purchase prints. I've contacted some personally and either get no response or they have been flaky on setting something up. Are these guys making too much money to be bothered to sell prints?

j-grabes (Dec 9, 2015 at 17:32)
This. Not only would I love to have some prints for myself, I know a few buddies of mine that would be so stoked to receive high quality prints for gifts, etc. Can this be a thing?

jervis (Dec 9, 2015 at 17:33)
All photographers should look into making a www.bigcartel.com page and link it to their own website or social media pages if they haven't the time to build a proper shopping cart. Then we can buy their prints easily, they can make money and go shoot more sick photos!

paulclarke (Dec 9, 2015 at 22:00)
Theyre not making too much money. I tell you that much right away. They're probably too busy tracking down people and companies stealing their work.

Monarch87 (Dec 9, 2015 at 23:18)
Some of the photogs should start an online gallery together with people like Micayla Gatto among others, where you can buy photography and art. A few snowboarders pulled it off with the asymbol gallery. Seems pretty successfull. www.asymbol.co There is plenty of artistic force in MTB. Let's bring it together!

ltrumpore (Dec 10, 2015 at 0:55)
Many of them do sell prints, just be prepared to pay an appropriate price for them (Meaning a couple hundred dollars and up).

jamesdunford (Dec 10, 2015 at 3:28)
Or, Pinkbike should build a solution that enables us to buy prints and take a cut along with the togs. Just offer it as an opt in when uploading. Just sayin'

mischieff (Dec 10, 2015 at 4:57) (Below Threshold)
alot of the pb uploads are very high res' just get them printed yourself. Drop them a message asking if they mind, if they hadn't be bothered to set their own thing up for prints i doubt they'd mind you doing it yourself.

WilliamTM (Dec 10, 2015 at 6:05)
@mischieff They're not nearly high res enough for a good quality print, especially on larger sized posters.

aliengin (Dec 10, 2015 at 8:07)
It is really hard to setup if your portfolio web page is not geared towards purchasing and printing online. And the the cost of printing yourself, mailing it safe to the buyer can be so high I bet nobody would buy a print. I used to do it but it didn't turn out to be a good idea.

Alainsleig (Dec 10, 2015 at 14:42)
Like Asymbol does for some of snowboarding that's a great idea! Also, you can always reach out directly to the photographer and get a quote.

mattsnz (Dec 12, 2015 at 19:37)
Isn't this exactly what SmugMug does? Awesome portfolio websites and links to top print labs?

kaptainkatsu (Dec 28, 2015 at 10:24)
Photographers are probably one of the most disrespected creative professionals out there (next to musicians.) Everyone wants images for free (bike companies are the worst.) You sell a image suitable for social media for $2 and they balk at the low resolution. Anyway, I sell 8x10's for $25.

I wish I had shot more MTB this year, I've got mostly cyclocross images right now

ltrumpore (Dec 28, 2015 at 13:49)
Know what you are worth and stick to it. Several bike companies pay upwards of $200 for single social media images but they will just as quickly take advantage of anyone who doesn't value (or know the value of) their own work.

kaptainkatsu (Dec 28, 2015 at 17:02)
$200 is chump change in the world of commercial photography. I was asked for two images to be run in multiple ads, multiple magazines plus online, balked at my prices, I gave a much lower bro price and still didn't want to negotiate. Bike companies know there's someone out there to give away all rights to a photo for a tshirt, handlebars, helmet, etc.

Not sure where everyone gets their info as to what rates MTB photographers get paid vs other industries. Sure there are brands in every industry who take advantage and photographers in every industry who allow it, willingly or unwillingly. There are also MANY brands and photographers who operate on a very high and respectful level. It comes down to valuing your own work, and also valuing who you wish to work with. From my own experience (not sure actual experience is allowed in the comments section) as a commercial photographer, who also happens to shoot a whole ton of stuff for MTB brands, I can assure you MOST are great clients to work with. And I know I certainly don't work for "chump change"

paulclarke (Jan 15, 2016 at 12:50)
@davetrump glad to hear that! I totally agree with if you believe that your work is valuable then others will. Im slowly looking for company that respect others as much as I respect them and who I can get semi REGULAR work from.
Several stolen photos showing up online is very frustrating, especially on websites of big brands that I have supported. But that does happen in every industry, not just bikes.
I guess the trick is to keep putting out good quality work and keep asking.

wipz07 (Jan 15, 2016 at 11:54)
Lately if I try to put it on high quality the image does not get bigger and the quality does not get better. Do you know how can I download them in High Quality?

mtbdude987 (Jan 22, 2016 at 10:51)
Little know fact here that i have been hiding or a while hoping pinkbike doesnt change it,if you take the link for a photo say something like this for instance ep1.pinkbike.org/p5pb12813196/p5pb12813196.jpg (one of my favorites) and then instead of that link you change the link to ep1.pinkbike.org/p0pb12813196/p5pb12813196.jpg it will allow you to automatically download the picture in the highest quality possible. For anyone that didnt notice the difference in the url i changed the first "p5pb" part of the url to"p0pb". Good luck and happy desktop hunting.

"Fantastic brand-new mountain shredding machine! Great Condition! Still performs perfectly! $15,000
I'm selling this bike because it's extremely good and the only reason I'm giving it away is to improve my Karma (I'm a Buddhist). I bought it for around 25,000 at the cycling dealership (fairly recently) so I'm giving out a huge deal to the lucky person who find's this add. This deal will go fast.
Specs are below.
Stem length: 200mm, Bar Width: 300mm Travel: 43mm, Colors: Purple and Yellow, Bar ends: Yes.
Thanks for reading!
I can be a little flexible on the price btw, I could probably do 14,500 (Or even 14,000) if you wanted a SUPER good deal."

davidsimons (Jan 16, 2016 at 0:45)
@bridgermurray Those bar ends, color matched to the grips? Also, big ring size on the triple crank? I'm looking for at least a 48. Oh, almost forgot, what shade of yellow is that?

brockfisher05 (Dec 10, 2015 at 8:30)
Why not have a print purchasing portal on Pinkbike? The photos are already being posted here. Have the option of buying a print or the option to spend more for the digital file so you can decide how to print it.

SXTRAILRYDER (Jan 15, 2016 at 12:40)
Pinkbike would be genius to add a new addition to their site that makes it easy for consumers to buy photographers prints. It would only increase traffic to the site and it would incentivize photographers to shoot more amazing photos!

SeanC1 (Jan 16, 2016 at 8:41)
I'd like to see this split into amateur and pro contests.
Isn't it always a paid professional who ends up winning anyway?

number-6 (Dec 28, 2015 at 11:12)
"One lucky voter will be taking home a Trek Remedy 9.9 complete with the newest SRAM kit and riding gear from Bontrager."
To qualify, the voter must be resident in North America or Canada...

cmjohnson (Dec 9, 2015 at 19:40)
The fact that this was posted on my birthday makes me feel good about my chances.... probably not though based on finalists last year
Below threshold threads are hidden

molloser (Dec 12, 2015 at 18:02)
I wonder which pro with a good camera man will win this year... I think PB should have an amateur photography competition as well.

BiNARYBiKE (Dec 28, 2015 at 0:47)
He said good camera man, not good camera. But anyway, it's a nice idea, but how could they define ameteur? Put in the time and effort, take a good enough picture, and it'll get noticed. That's the only way.

eddardstark40 (Dec 9, 2015 at 17:08)
last years with christophers winning shouldnt have happened timing so what they have settings on cameras that take multiple shots at once wil sterling lorences was all killer no filler

IsaacO (Dec 9, 2015 at 17:13)
Even the ability of taking multiple photos at a rapid speed doesnt mean that the photographer can predict the unpredictable. Great photographers put themselves in situations to capture fantastic moments. Call it a "Happy Accident", but don't call it predictable.