by devonbalet
Views: 1,068    Faves: 0    Comments: 0
Sit down with husband and wife, Chris Meeriam and Libby Sheldon to get their take on the Trans-Sylvania Mountain Bike Epic.

Today started at R.B. Winter State Park, after a drive along a pastoral valley road complete with Amish buggies. In past editions of the NoTubes Trans-Sylvania Epic, this stage has served up arduous singletrack sections and heartbreaking climbs, but this year it was smoother and more forgiving, thanks to some route changes and lots of trail work. Payson McElveen (Competitive Cyclist) and Crystal Anthony (Riverside Racing) won the elite men’s and women’s categories while McElveen and Vicki Barclay (Stan’s NoTubes Elite Women’s Team) successfully defended their respective leads in the overall elite classifications. 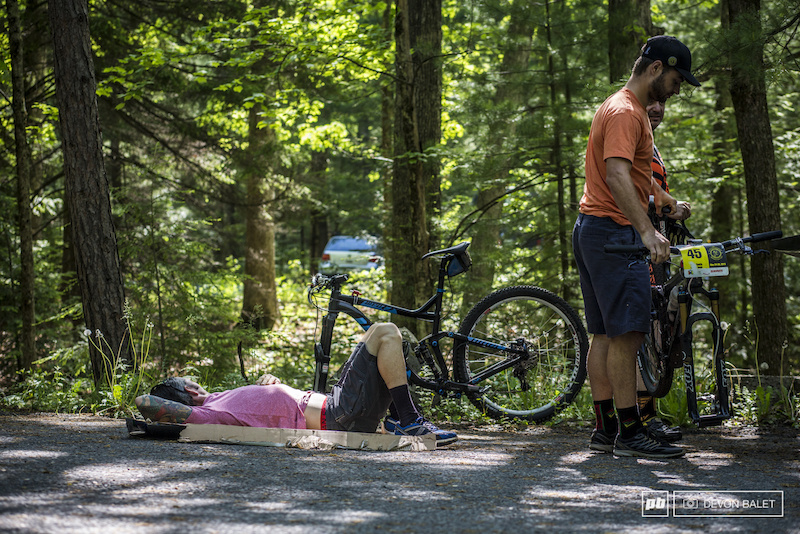 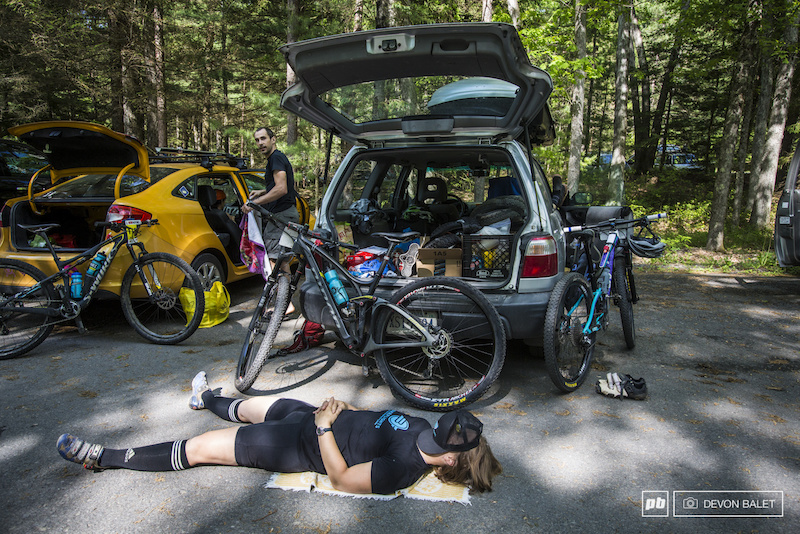 With a mellow start to day five, many racers took advantage and caught some extra zzz's before the day's race. Sue George doesn't need much to get comfortable. It is probably because she is crushing behind the computer, writing and editing the day's events after riding it all. 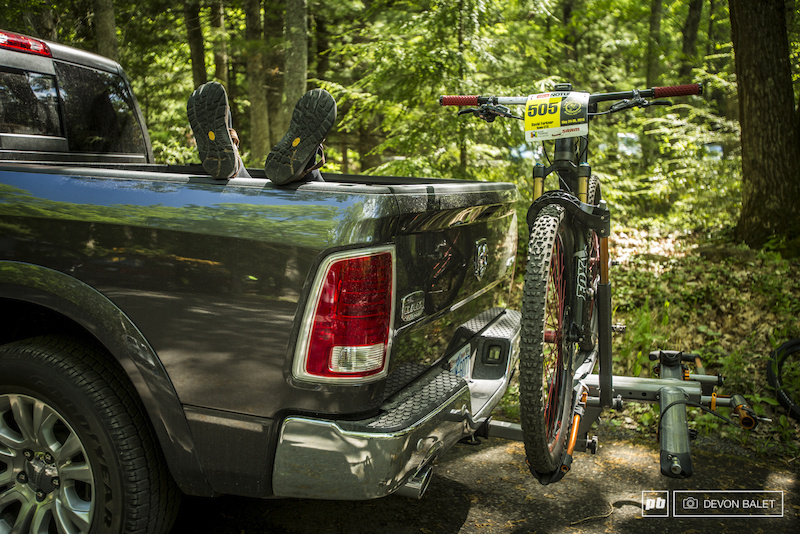 Get off your feet and put them up!

Payson McElveen (Competitive Cyclist) added slightly less than one minute of time to his lead over teammate, Justin Lindine. 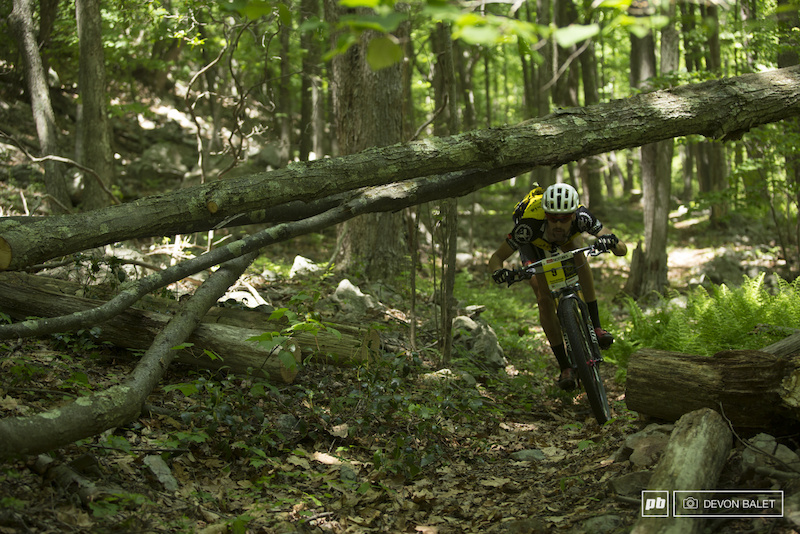 After yesterday's road hammer fest Payson returned to his normal position of first on the trails taking another win on the day.

“It was a solid day,” said McElveen. “This stage always makes me nervous because it’s more raw than the others, so I first and foremost wanted to come into today and defend the lead and get a bit more time if I could.”

Experience at this race helped McElveen’s strategy. “I remembered how the race played out last year. There’s a steep singletrack bit after a steep dirt road, and I remembered that singletrack being selective last year, so I jumped in and hit it, and got a gap on Justin. I did the following enduro section as fast as I could while still being safe. The hard part was the hard drag of 10-12 minutes on dirt road. Last year, Jeremiah Bishop was the one causing pain and got about 10 seconds on me on that road, and I went deep in the pain cave to bridge back up.”

McElveen and Lindine are separated by just under four minutes in the general classification, and the two have 16 minutes on the third-place GC rider, Peter Glassford (Trek Canada). “Justin and I went one-two again, and that’s the best scenario,” said McElveen.

Glassford’s strategy today was part sprinting, part styling. “I just wanted to get my Trek Superfly to the road gap jump as fast as I could,” he said. “Since I am outnumbered in the lead group, I have been basically pulling pretty hard and trying to keep myself out of trouble until attacks start, then hoping that one or all of them drop off, and I end up in a decent spot. I was psyched to get some time on Tristan [Uhl] today and even more psyched to hit the road gap with a strong whip this year.” 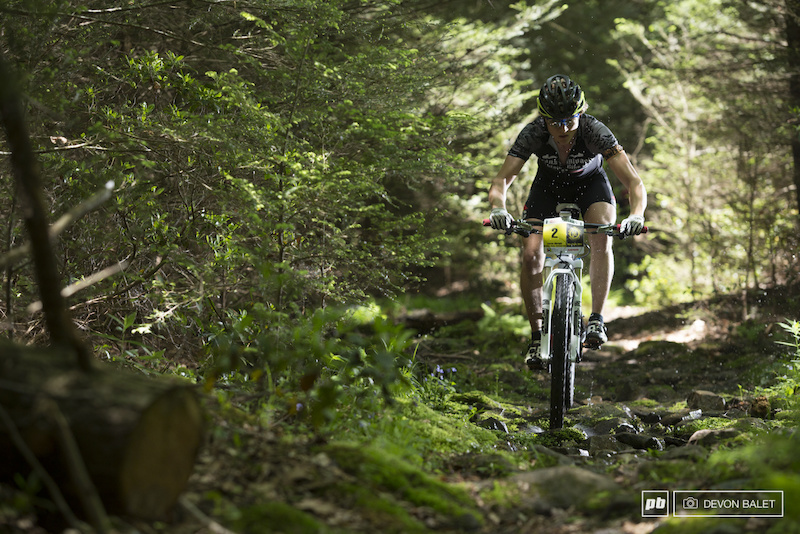 Aaron Albright finds the quick and dry line through one of many water crossings on the day. Aaron has had a great week of racing, sitting well in 6th overall. At such a young age, he has a bright future ahead of him.

Once again, Vicki Barclay (Stan’s NoTubes Elite Women) separated herself from her fellow female racers early and rode with the elite men. Her strategy didn’t get her the win today, however.

“I went off pretty hard with the lead men and was hanging on their train,” said Barclay. “I led the race until the first piece of singletrack after the aid station, the East Coast Rocks section, and I came out of there and looked behind me and saw [my teammate] Mical [Dyck].” 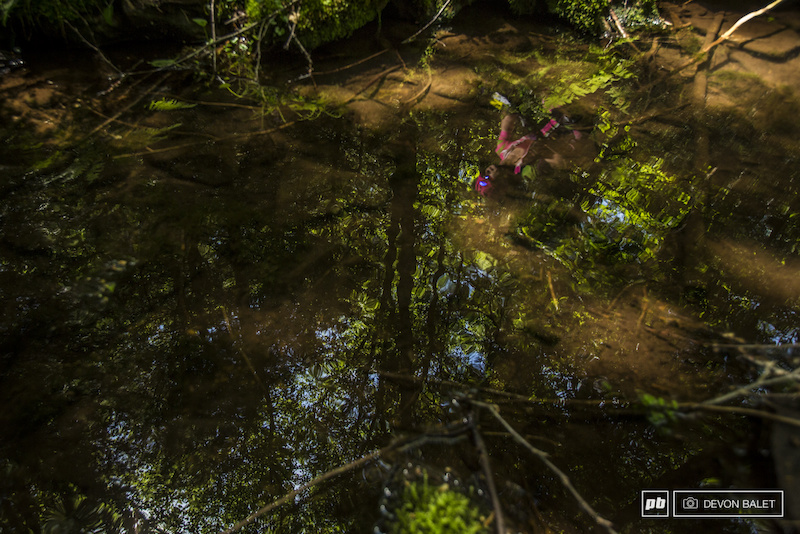 Mical Dyck of the Stan's No Tubes Womens Elite team has had a great week of racing. She has been chasing her teammate Vickie Barclay, sitting high in the GC as well as in the Enduro GC. 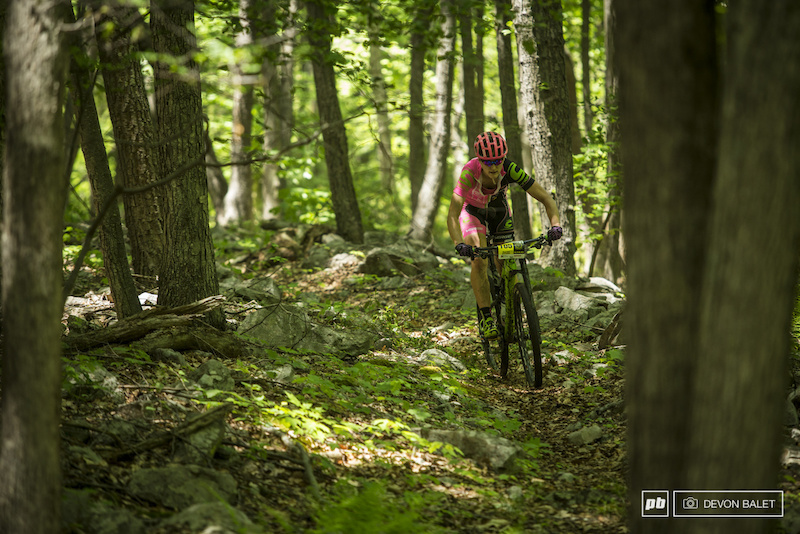 Barclay got a gap on Dyck, but Crystal Anthony (Riverside Racing) eventually bridged up. Barclay and Anthony rode together for a section until they started to climb.

“She attacked and I thought it was a really long climb [like last year] and I was hurting,” said Barclay. “But then we went left into singletrack! I could see her all the way until the last hike-a-bike section, she was right there, but she got back and put in a gap on me on the road.”

Barclay said she’s not worried about finishing second to Anthony on the day because she has a lot of time on the GC. “But the cyclo-cross queen we all know and love put some power down today!” said Barclay of her top rival. 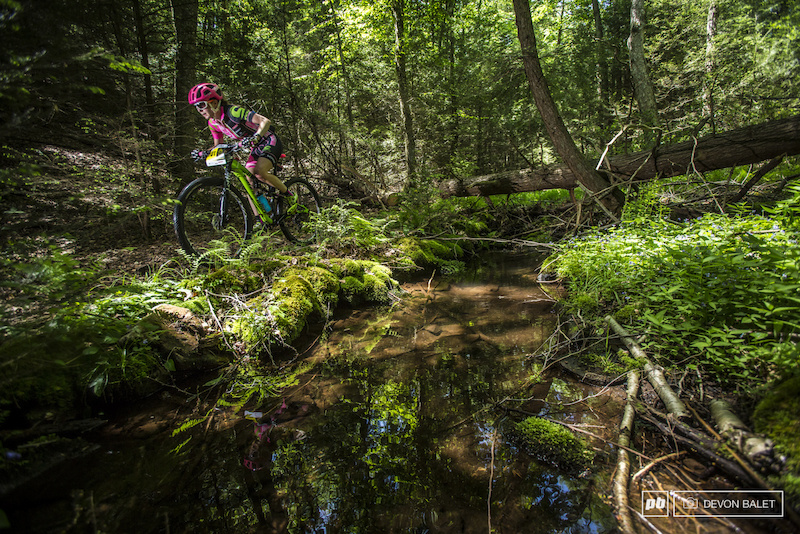 Vickie Barclay may not have taken the win today, but she has a strong hold on her Overall GC position in first.

Anthony showed that ‘cross techniques can translate to longer races as well. “I have now learned my lesson this week and rode my own race at the start, just tried to keep Mical in sight on that first climb but didn’t try to chase her down,” she said. 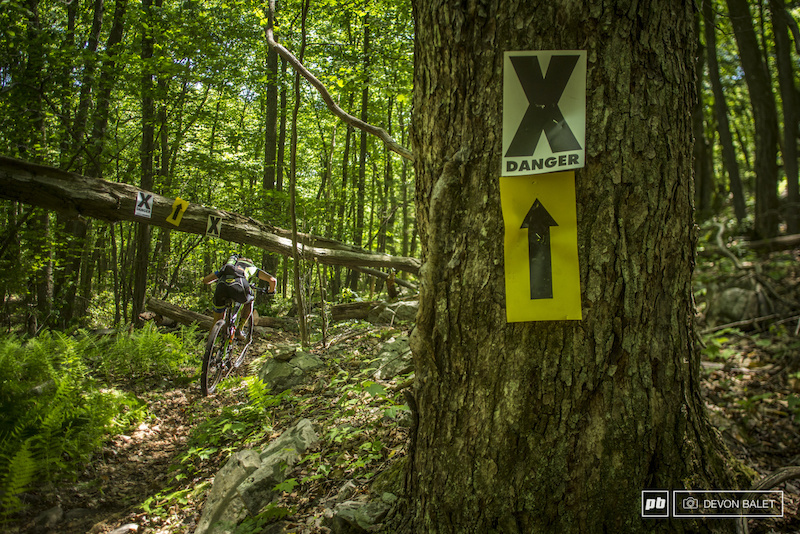 Crystal Anthony ducks and pedals her way to a stage win after putting in an unanswered attack on Vickie Barclay.

“I just rode my own pace and got Mical on the first enduro section, was riding with her for a while and was starting to feel good,” said Anthony. “Then, after the East Coast Rocks section, I started seeing Vicki, and caught her and we rode together for a while. On the road, I didn’t really mean to attack, I just stood up, realized I was getting a gap, and thought the top of the hill was coming up. I was like, ‘What am I doing?!’ But I rode as hard as I could to stay away.” 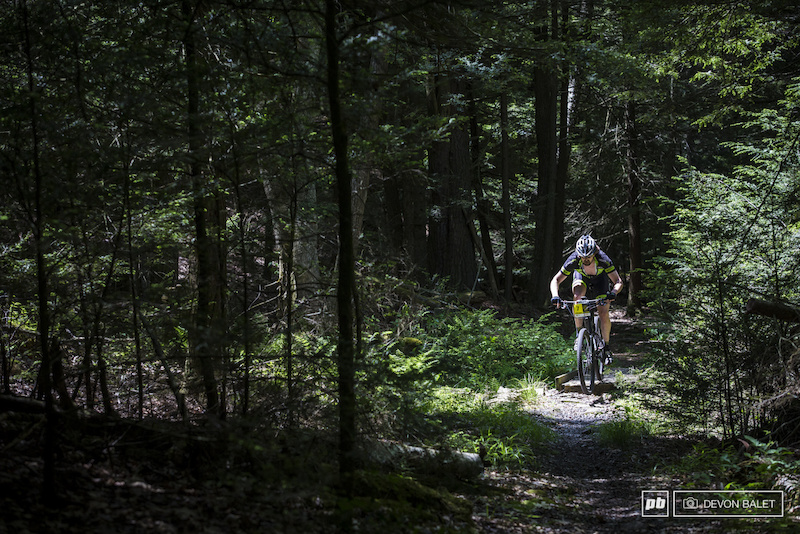 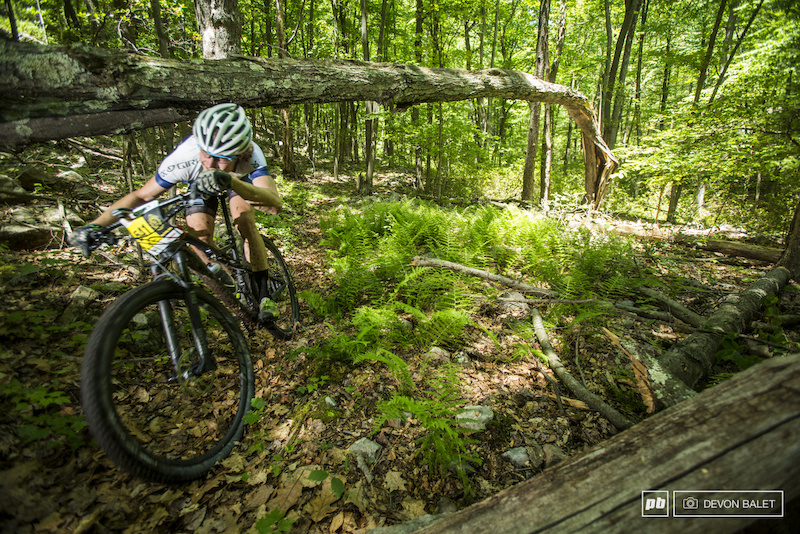 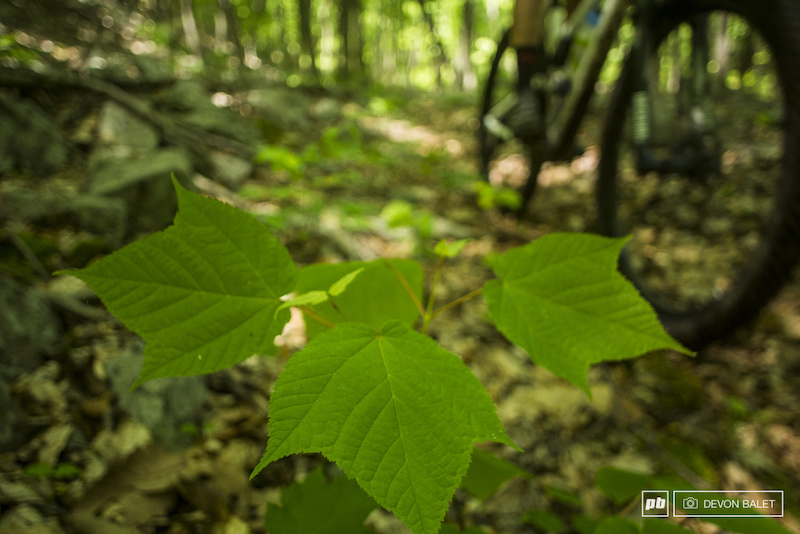 It sure is green here in Pennsylvania. 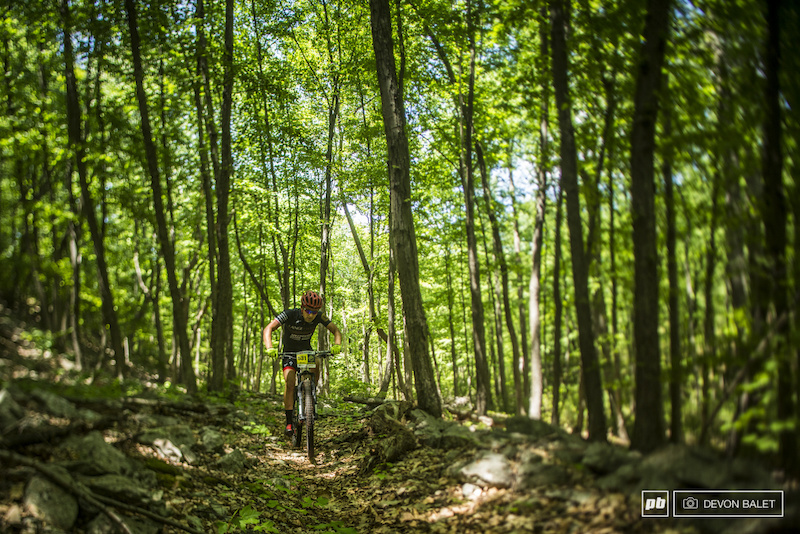 Cody Kaiser of Colt Training Systems team pedals out the last bit of the third of four enduro stages for today. 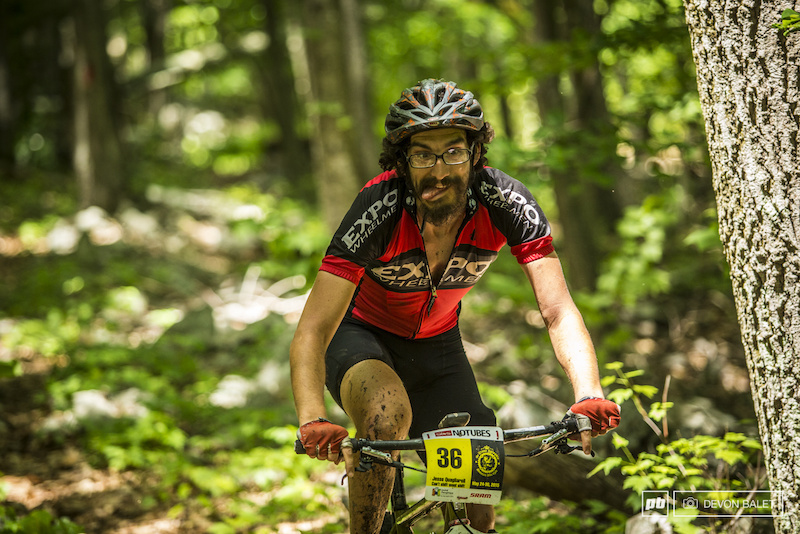 Jesse Quagliaroli had a great day on his singlespeed today, taking the stage win. After a rough go on stage two, he is edging his way back to the front of the singlespeed race. 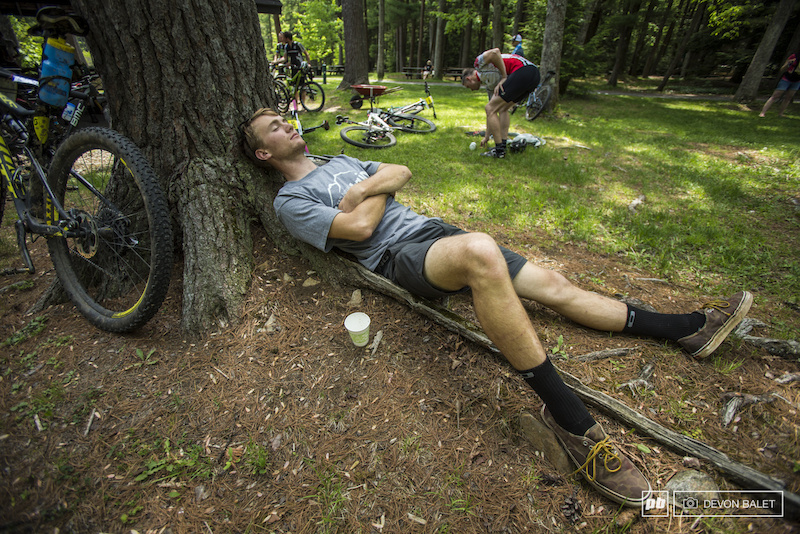 mobilechernobyl (May 29, 2015 at 11:30)
Because you have to be slightly crazy to want to limit yourself to one speed!

SpillWay (May 29, 2015 at 7:32)
That ain't hipster beard - ain't coifed enough. It's just 5th-day-of-singletrack gruff. Hard to shave when you can't hold your hand steady. Dem's some rocky trails.

PHeller (May 29, 2015 at 10:04)
Wait, is there a non-hipster beard? If he was riding gears, would he still be hipster? Does it reduce my hipster-ness if I ride a downhill bike, moto, and drive a brodozer? I gotta keep this beard at all costs.