by devonbalet
Views: 1,265    Faves: 0    Comments: 0
Have a seat with Megan Chinburg of Portland, Oregon and get her take on the TSE, enduro racing and her thoughts of the week so far.

Today’s stage four is considered the 'road' stage of the NoTubes Trans-Sylvania Epic, but in the wilds of central Pennsylvania, that means surfaces ranging from gravel to chunky doubletrack bracketed by sections of twisty, rocky singletrack. Nevertheless, there was plenty of roadie-style peloton action complete with strong attacks from the start. Dan Timmerman (Riverside Racing) and Vicki Barclay (Stan’s NoTubes Elite Women’s Team) won the elite men’s and women’s categories while Payson McElveen (Competitive Cyclist) and Barclay successfully defended their respective leads in the overall elite classifications. 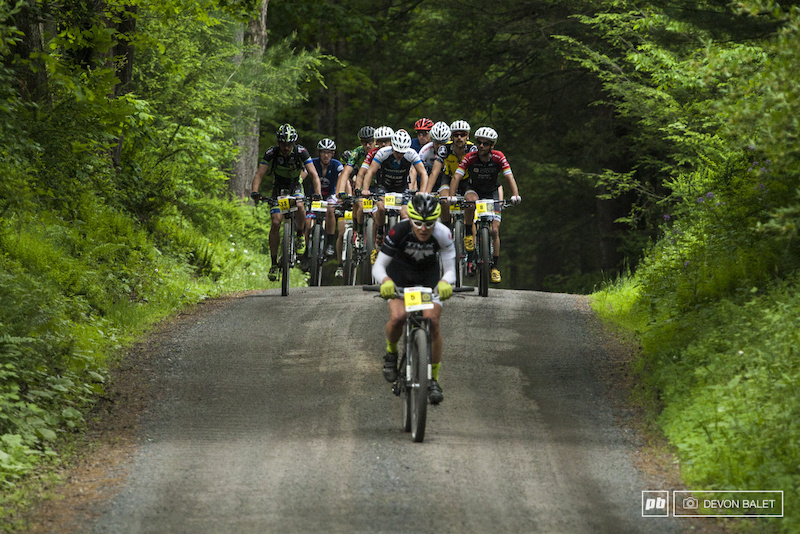 When Peter Glassford put in an early attack, the rest of the field didn't seem to care or want to chase. Within the first 10 miles Glassford had a minute and half lead over the next group. 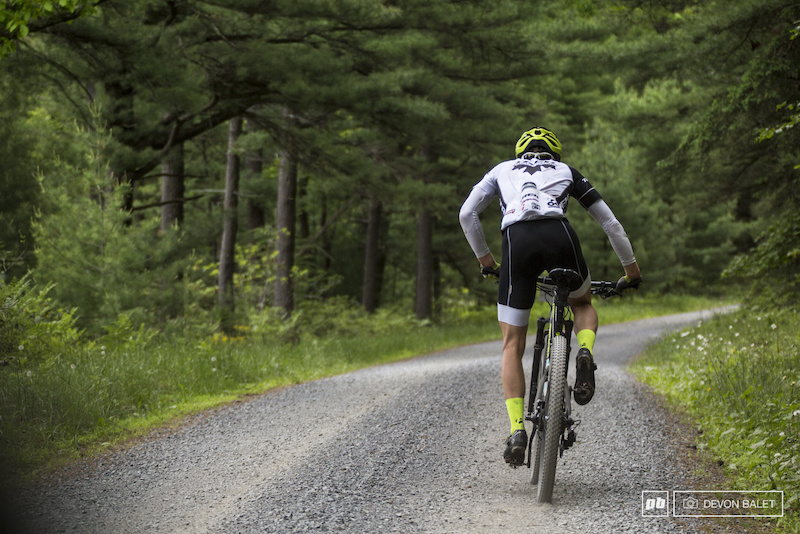 Any time the pace would ease up on the front of the race, Peter Glassford would get to the front and put the pressure back on. He seemed to be controlling the race for most of the day. 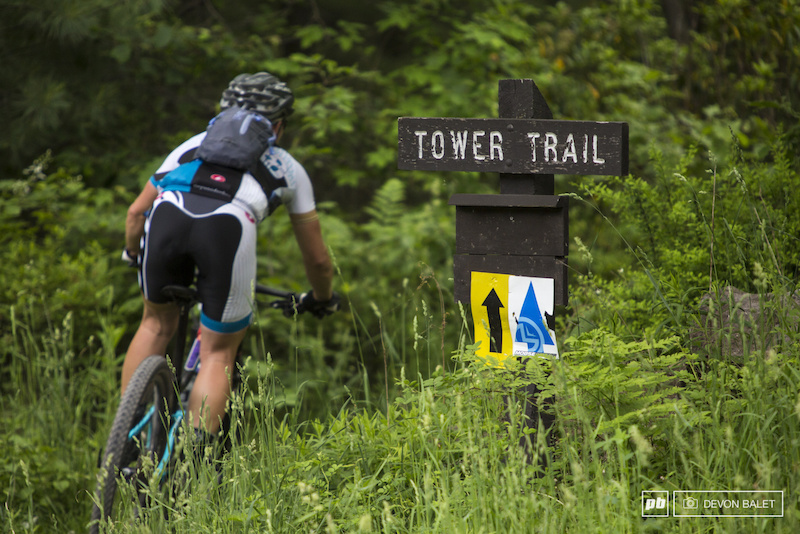 It wasn't all road today. Megan Chinburg drops into Tower Trail and the second enduro segment of the day. 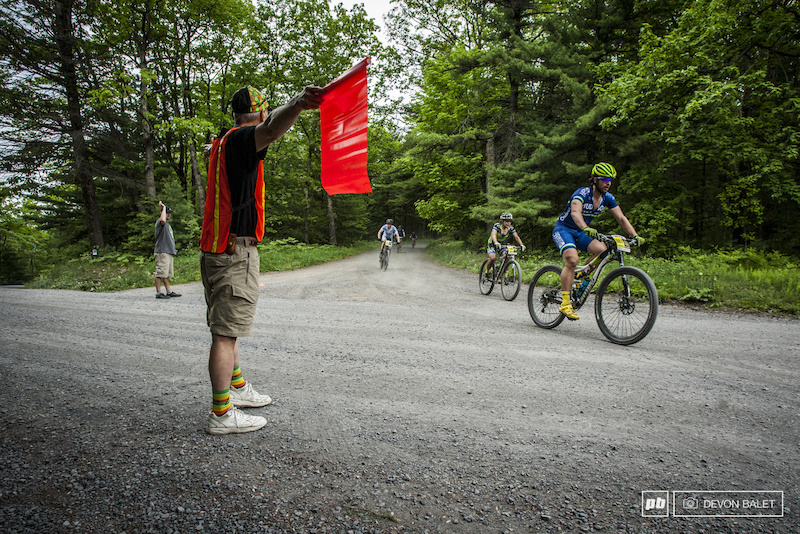 Riders finishing up a long road section before entering Tower Trail and the second enduro segment.

Glassford set a fast pace early and was pleased with the result. “I’m rarely going to win in a sprint, so I started sprinting four miles out,” he said. “I was out front for a while and that let me ride the second enduro section alone, which was good.” 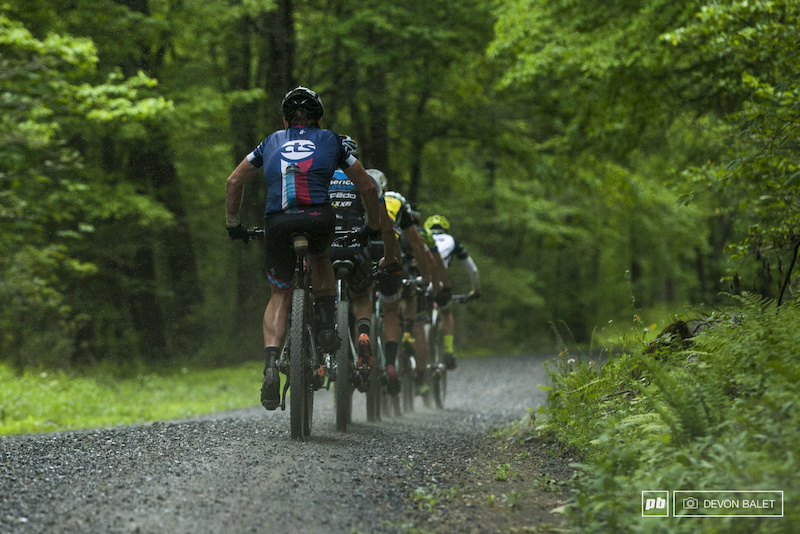 “Then, it was just the lead guys, which is a little nicer not having to fight for position, since everyone is a solid rider,” said Glassford. “I just tried to drive the pace every time I could on the climbs so everyone was a little more fatigued coming into the sprint, and I think it worked. Last year, I was blown on the last climb, but this year, I was right there with the guys.” 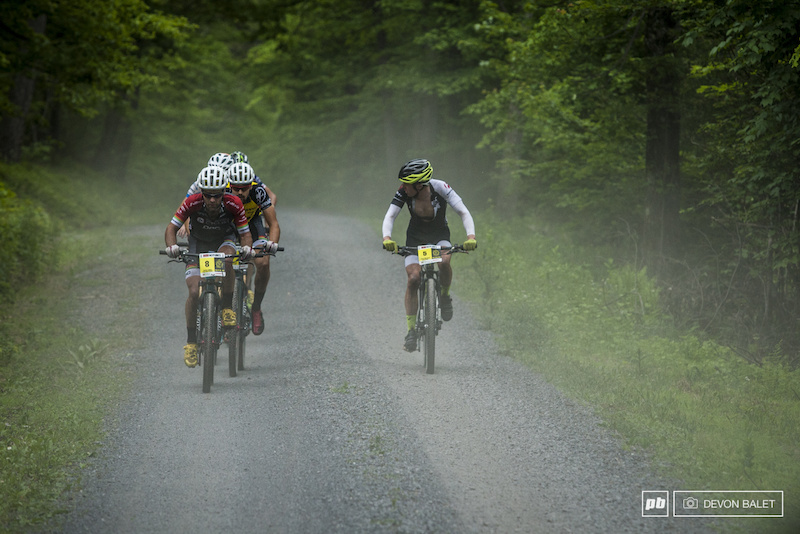 With the finish within 10 miles, Peter Glassford looks to the other leaders to keep up the pressure. Any time the group eased up he would push the pace again.

Stage winner Timmerman, enjoyed the lack of rocks on much of today’s route. “It was a much better day for me, that’s for sure,” he said. “I pretty much perpetually have back problems. The technical stuff hurts it, so today was better for me.”

Timmerman made the finish extra exciting by nearly taking out the timing table. “I didn’t know what to expect for the finish — if we had a loop or we’d go straight in — but we went straight in, so I just went for it. I didn’t really think about it. I saw the banner and I went. I wanted to be close to the timing thing, to make sure my chip read.” 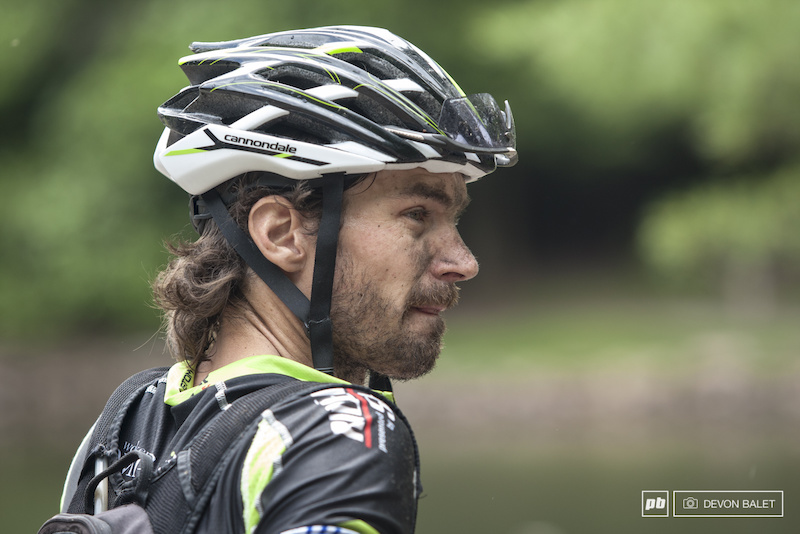 Dan Timmermen has been racing quietly along all week, finishing strong each day. Today was his day to hold tight with the front group and take the spring finish win.

After four days of racing, McElveen and Lindine remain within three minutes of one another on GC. Lindine engaged in a bit of psychological strategy against his teammate. “Justin said it couldn’t possibly rain today, and wouldn’t it suck if it was wet — then it rained,” said McElveen. “But those dirt roads were awesome, those roads were beautiful.”

Lindine admitted he liked the wet conditions, too. “The rain was awesome!” 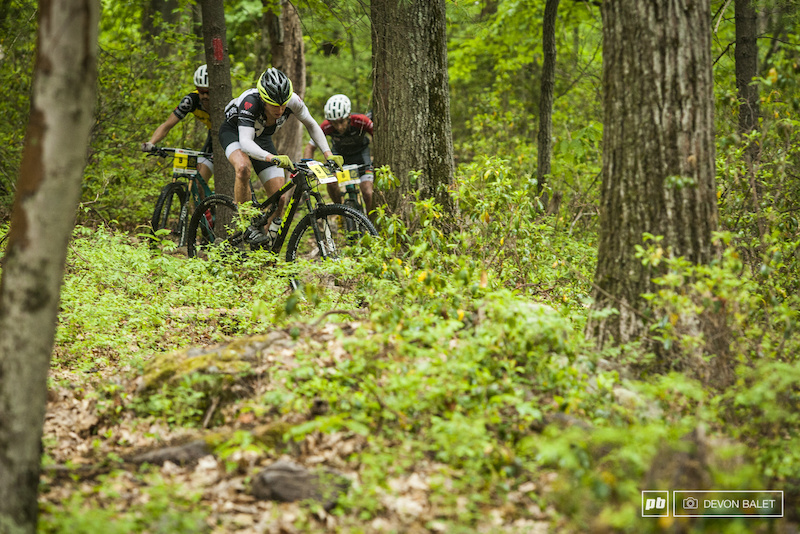 After 40 miles of racing, Peter Glassford continued to push the pace of the race all the way through the last bit of single track to the finish.

Vicki Barclay (Stan’s NoTubes Elite Women’s Team) had a great day, and was the only woman to bridge up to the train of elite men, gaining 5:30 on the next female finisher in the process.

“It is so great to feel strong every day,” said Barclay. “Today, I was conscious at the start of not getting out of the saddle and trying to drill it up the hill with the guys, just trying to stay in the saddle and stay with them, not blowing five matches on the first climb. I was with them, and Mical [Dyck (Stan’s NoTubes Elite Women’s Team)] was there, and I could see her out of the saddle, but I thought I’d play it safe. And she blew up a little when I passed her, so then I put in a dig to try to catch that group of men.”

Although they are teammates, Barclay explained that she and Dyck are both gunning for the win. “Mical and I are first and second and both of us want to win, so it’s hard to have team tactics or team dynamics now — it’s every woman for herself,” she said. “But no one is that safe just now in the general classification.” 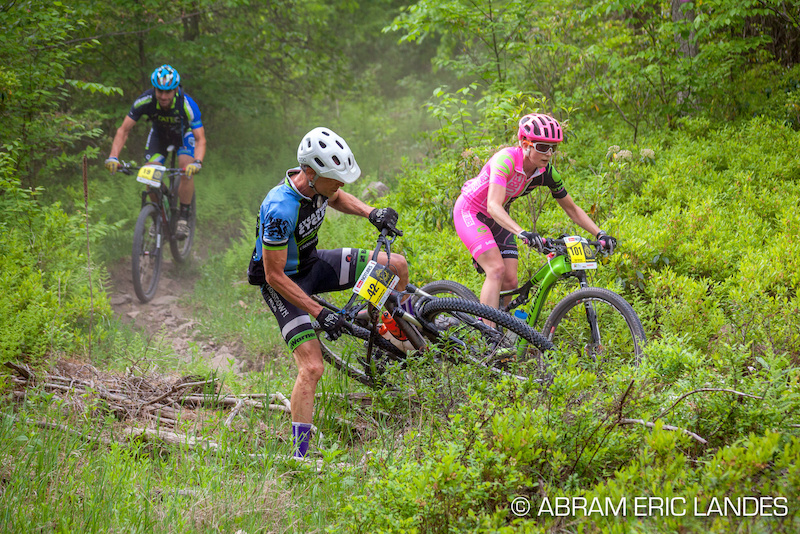 Vickie Barclay continued her domination in the Women's Open Class, finishing in front of a large number of the Men's Open Class as well.

Crystal Anthony (Riverside Racing) kept her head despite some difficulty and earned second on the day. “The week has been up and down, but today was good. I learned on the second day that I have to ride my own race and ride where my fitness is,” she said. 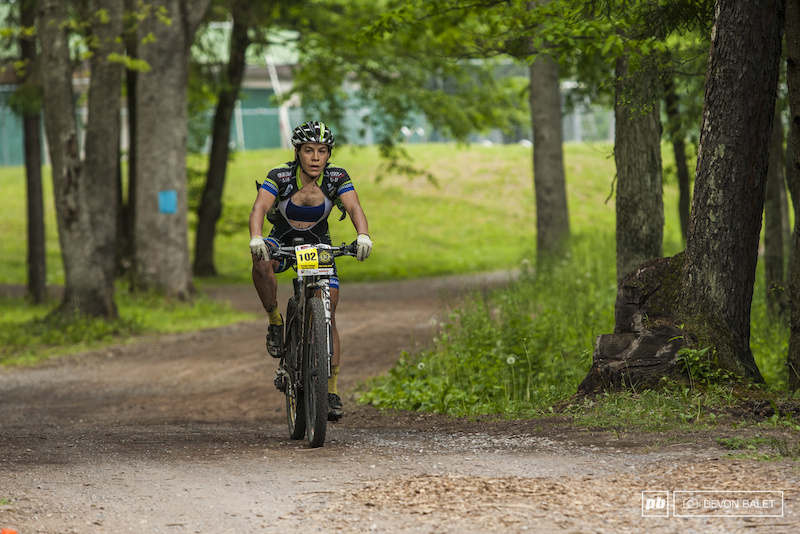 “I got popped off the back today but I kept with it — it’s a long stage,” said Anthony, who dropped back to fourth for a bit, but kept Selene Yeager (Rare Disease Cycling) in sight, and by the last climb, had gotten around her. “Then Mical was visible ahead, and I got past her on the last climb and rode like hell to stay ahead on the final bit. It was a good stage!”

Dyck hung in there for third place. “My day was hard! I felt good for about 20 minutes and then my legs were empty,” she said. “It was a lot of road, and nothing super steep, but they went on forever so you had to put constant power down. There was a lot of mental battle today. You’re moving fast, but it’s still a lot of distance to cover.”

“I’m going to be 100 percent honest. I woke up this morning, stepped outside and burst into tears. I’m so mentally tired,” said Yeager. “But I really like this stage, so I went out, rode around, and it was a beautiful morning. I just keep head-checking myself — this isn’t the end of the world, it’s just a bike race, and if I do good, great, and if I don’t, it’s OK. It’s taking more work to put myself in a good place in the morning, but once the race is on, I find that good place. I’m enjoying the race.” Yeager’s good attitude carried her into fourth place for today’s stage. 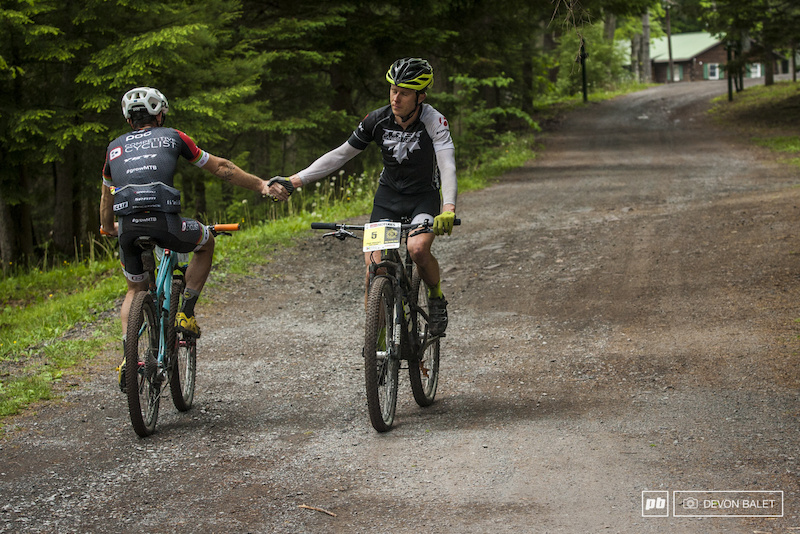 Peter Glassford and Tristan Uhl exchange a handshake after a full on battle on the roads today. 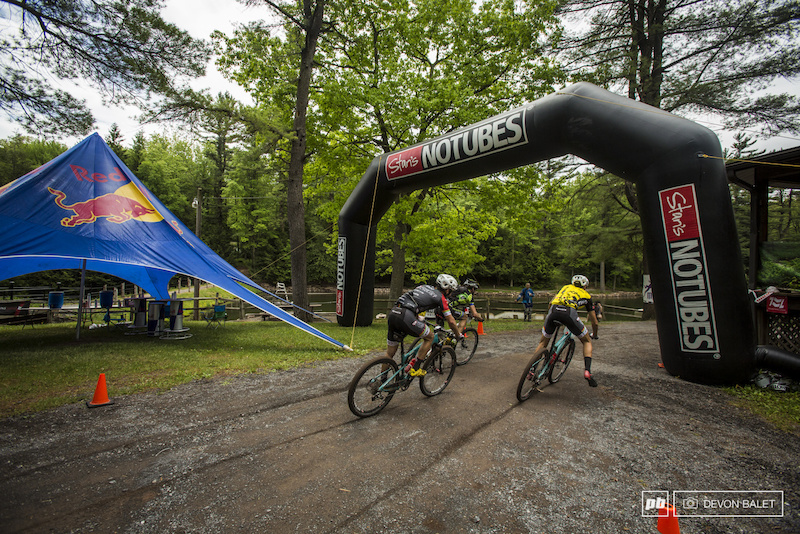 After three hours and 46 miles of racing it came down to a spring photo finish at the line. 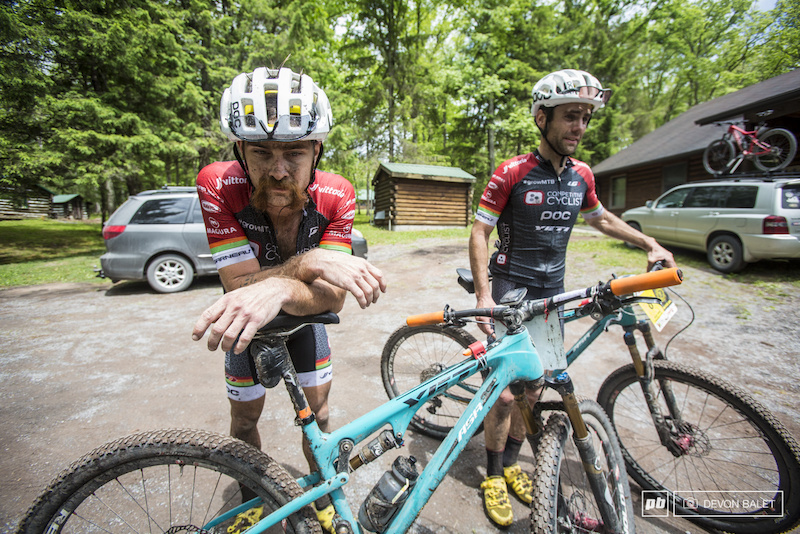 The Competitive Cyclists had some team tactics plans for today's big road style stage, but not everyone was going to have it. Tristan Uhl had hoped to take the win on the day, but the 46 mile hammer fest wore away at him, coming up short for fuel in the tank and he fell off just before the finish line. 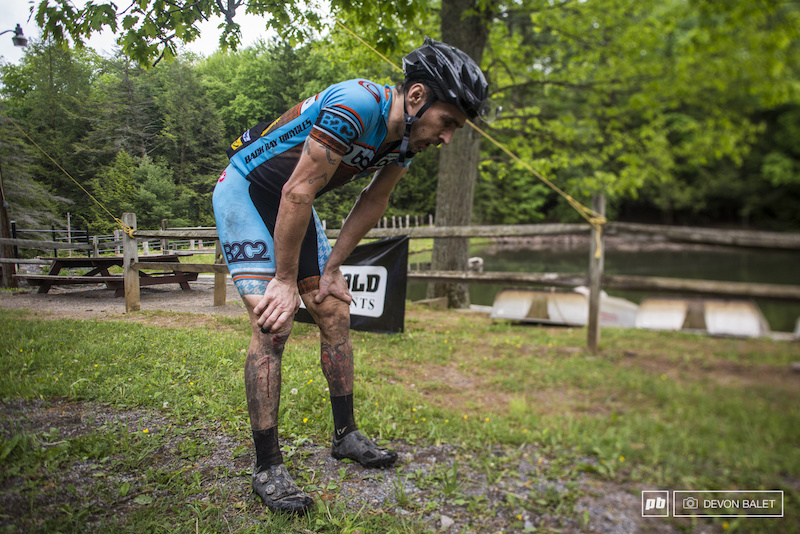 Michael Wissell found his way back out of the pain cave after today's road hammer fest, but it also involved flesh meeting gravel. 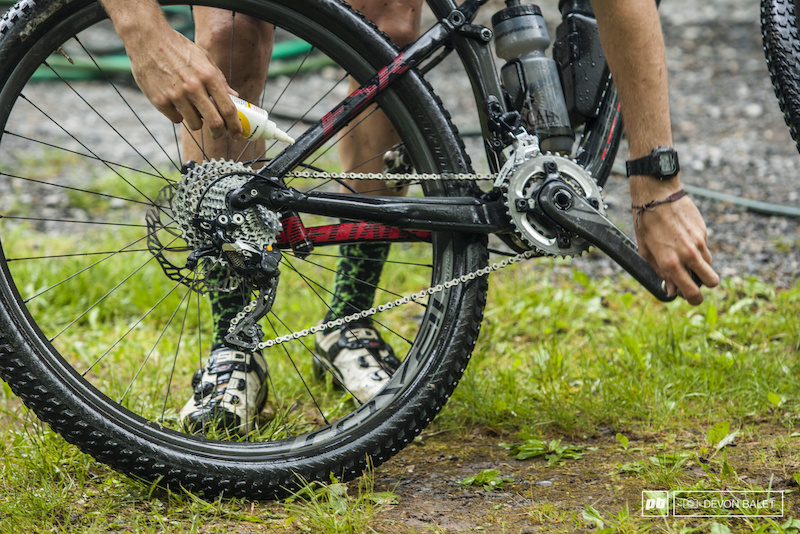 After a long day of riding dusty roads and then getting rained on, a good wash and lube will keep the bike running happily. 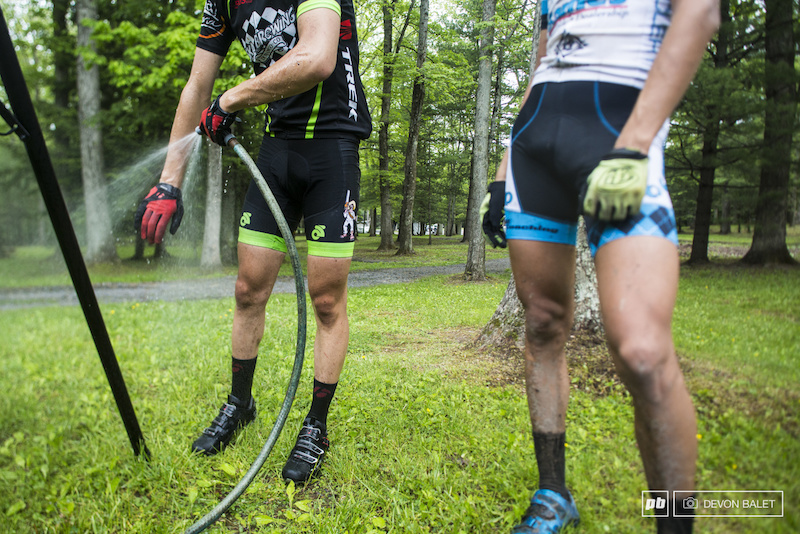 Sometimes it just best to hose yourself off after your bike.

sicsoma (May 28, 2015 at 10:54)
wow, looks like Tons of Fun! i sure with that video had a little more mountain biking in it, and less mindless, droning interview

Beau-Doug (May 28, 2015 at 15:16)
Believe it or not West Coast, these trails have a lot of steep descents. Not sure what's up with the ample fire road pics and the moose knuckle at the end! lol!