by devonbalet
Views: 1,627    Faves: 0    Comments: 0
Have a seat with Overall GC leader, Payson McElveen and get his insight on how he takes on the GC vs the Enduro GC.

Today’s stage 3, the Galbraith Enduro, is a crowd-pleaser for both participants and spectators at the NoTubes Trans-Sylvania Epic Mountain Bike Stage Race. Five enduro segments of classic East Coast singletrack, each steeper and rockier than the last, tested racers’ ability to flow like water — or at least to remain upright and live to fight another day. Justin Lindine (Competitive Cyclist) and Sue Haywood (Stan’s NoTubes Elite Women’s Team) won the elite men’s and women’s stage while Payson McElveen (Competitive Cyclist) and Vicki Barclay (Stan’s NoTubes Elite Women’s Team) successfully maintained their leads in the overall classification. 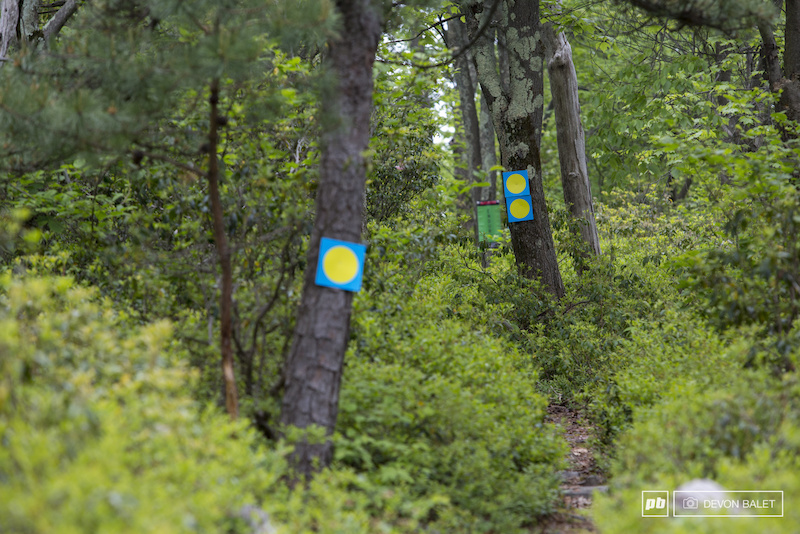 A sign of a good time ahead. Is this really on the enduro segment??

One wouldn’t think that cyclo-cross skills would necessarily translate to enduro, but Justin Lindine (Competitive Cyclist) shows it’s possible. He won the day with an impressive time of 17:35.

“Last year, I think I ended up further back in the group at the start. I’ve always done this stage further back than I wanted to be, so it was nice to be in the front early to have the sections clean,” said Lindine.

“Payson [McElveen], Tristan [Uhl], Peter [Glassford] and I were kind of a little group. We hit the timed sections first and pretty much hit them in line, and it was really good. I led through most of them, and it was a way for my teammates and I to make sure nothing catastrophic happened to us… And it was nice to have company.”

Lindine proved his good result in the enduro stage last year wasn’t a fluke. “Last year was surprising, I was second in the stage. I knew I was trying hard but I didn’t know I was trying that hard,” he said.

“And there were only 10 seconds to first. So it’s cool to go out and surprise everyone a bit, you know, cross country riders can descend, too. Makes me want to try enduro racing. It’s tricky. Out here, it’s risk-versus-reward descending. You break stuff more often, you flat more often, but I enjoy it. You switch your brain off and just go.”

Lindine’s teammate, Tristan Uhl followed his lead to earn second on the day with a time of 18:13. Payson McElveen hung on to the Competitive Cyclist train and didn’t lose too much GC time.

“It’s good to get out front a bit on this stage and not be waiting in line at the top of the segments,” said McElveen. “We’re all pretty good friends, so we decided to roll the climbs together and pretty much stuck together on the descents.”

“Both Tristan Uhl and Justin Lindine are more confident descenders than I am, so I was taking it a bit more conservatively, just because I have the lead and I want to take care of that lead, while they were trying to make up a bit of that time. But Justin is a great descender so I think I lost a bit of time to him today. It was a balance working as a team to get down safely while all of us were trying to do good times.” 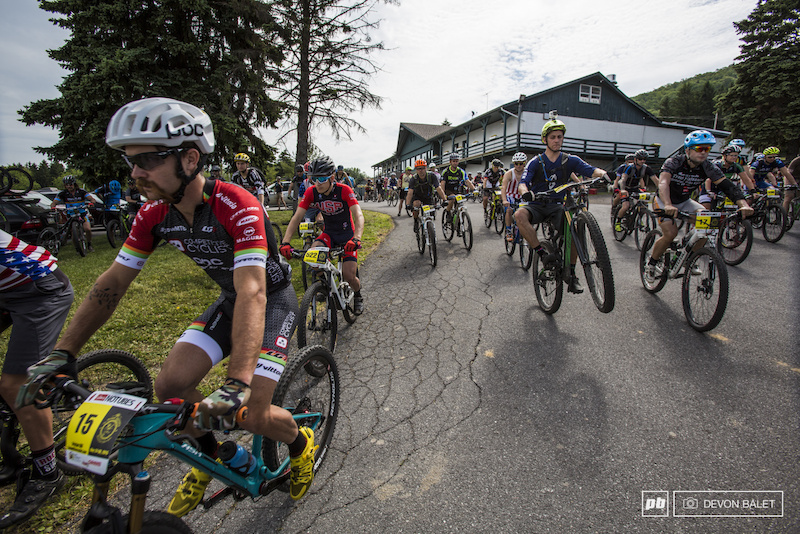 “If there was any stage that I would have the chance of winning, it would be this one,” said Haywood. “But with enduro, you know how people say in bike racing anything can happen? Enduro is even more like that. You have a lot of expectations but it’s so easy to mess up. You always try though!”

The Stan’s NoTubes women dominated the top half of the results, but Haywood attributed that to camaraderie more than planning. “I don’t think riding together was any kind of strategy. Some people ride faster because they’re able; they’re a lot faster up the hills. The open men were done so quickly! Their day is much shorter,” she said.

“It’s always more fun in this stage to ride with friends. You want to be with people you like,” said Haywood. The NoTubes women did coordinate their outfits — they all donned baggy shorts for this stage. Haywood said that it’s back to work on the next stage. “Tomorrow is an important day for the women—different people have different strengths, so we’ll see.”

“We all rode together for the stage, Vicki [Barclay, Stan’s NoTubes], Crystal [Anthony, Riverside Racing] and Sue [Haywood]. We didn’t hammer up the road, we took it easy going to the first stage,” said Dyck. About the team kit coordination, Dyck said, “Baggies make me feel cooler!”

Dyck also enjoyed her first go at the NoTubes Trans-Sylvania Epic’s enduro day. “I really liked the third and fifth segments,” she said. “I really liked five. I got held up at the end, in the big rock section. Racing—always better than working!”

Vicki Barclay had a good enduro day as well and hung on to her top spot in the general classification. 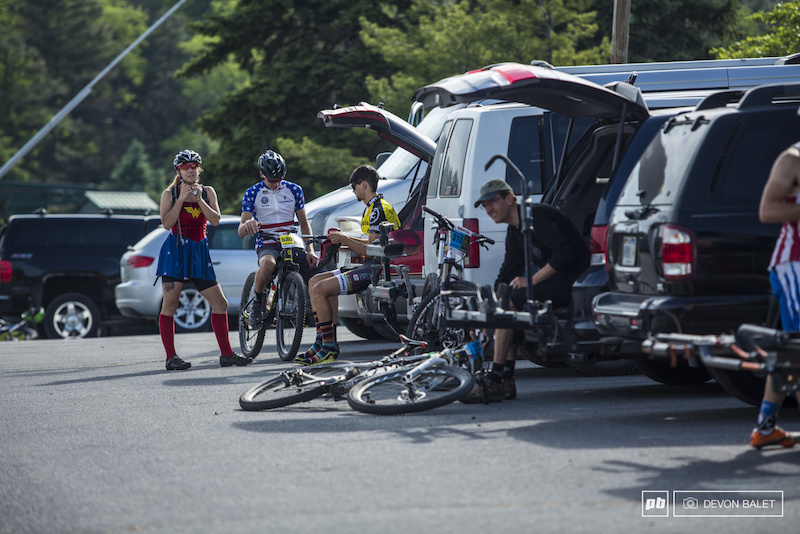 U25 racers with Colt Training Systems team members all came together with a fun attitude of camaraderie, showing off their person red white and blue colors. 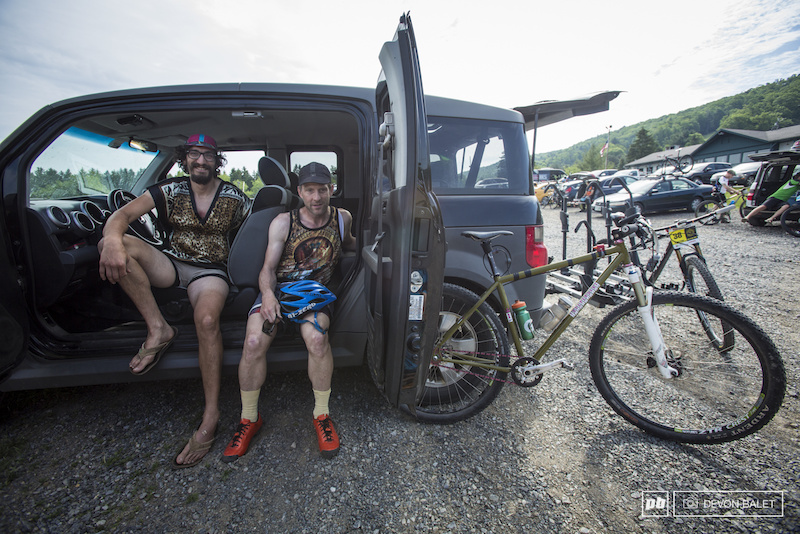 Jesse Quagliaroli and Michael Maggs prepare for their enduro day with a little singlespeed flare. 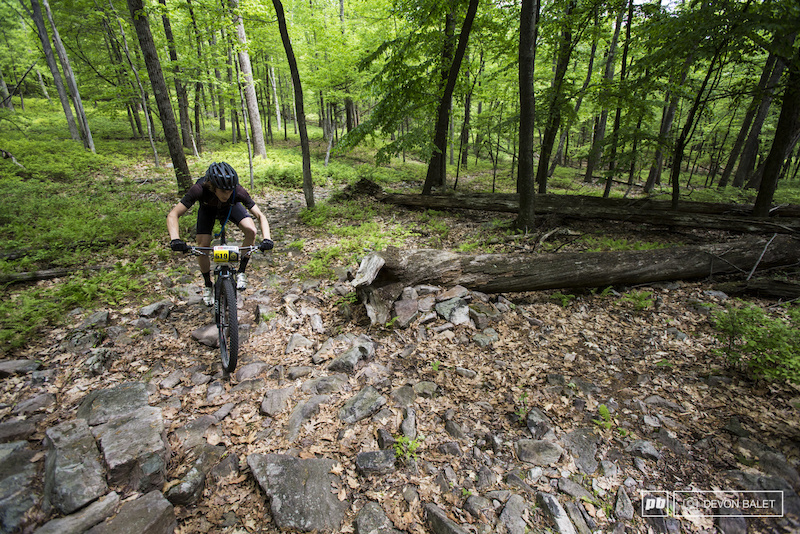 Is this really on the enduro segment?? Cameron Dodge of Colt Training Systems hammers out the last bit of the first of five stages on the day. East Coast Rocks are something special, flat can be harder than steep sometimes. 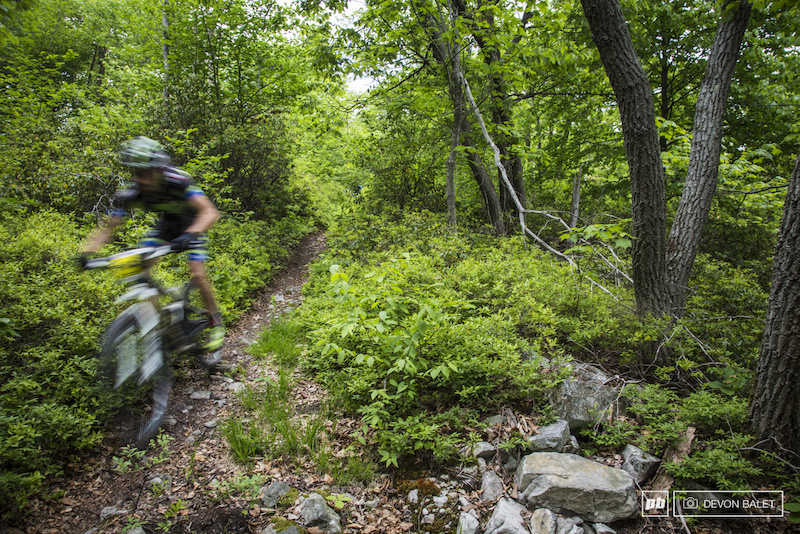 A racer blurs through a buff section of stage three. High speeds on smooth trails will quickly open up to rocky, square edged rocky trail. 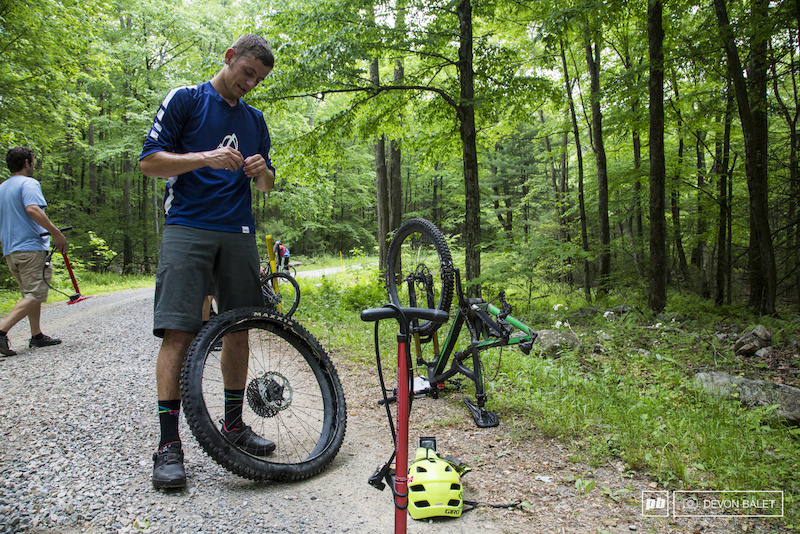 An unfortunately common scene on the day for many racers. Cody Phillips repairs a flat at the bottom of stage three. 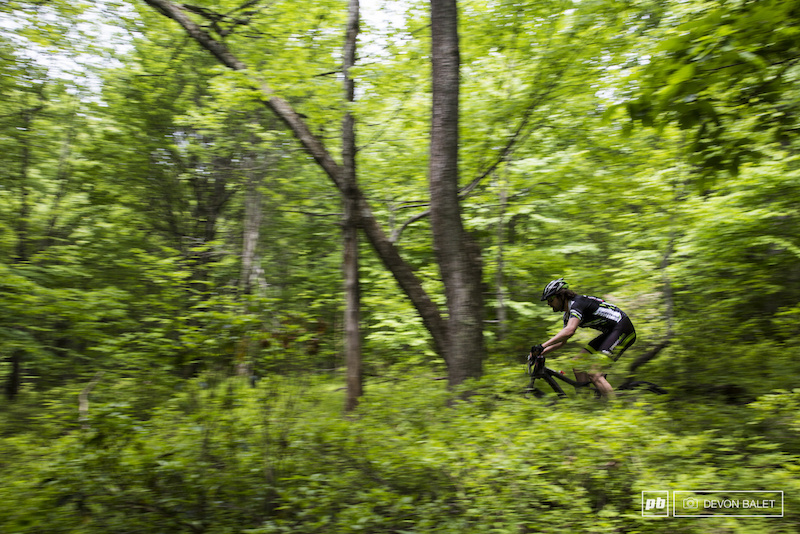 High speeds, deep forests and rocks are the theme for the TSE Enduro. 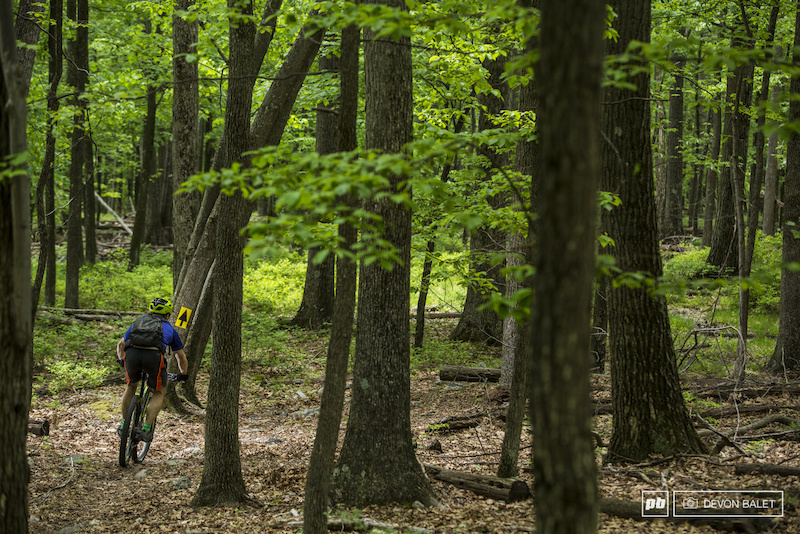 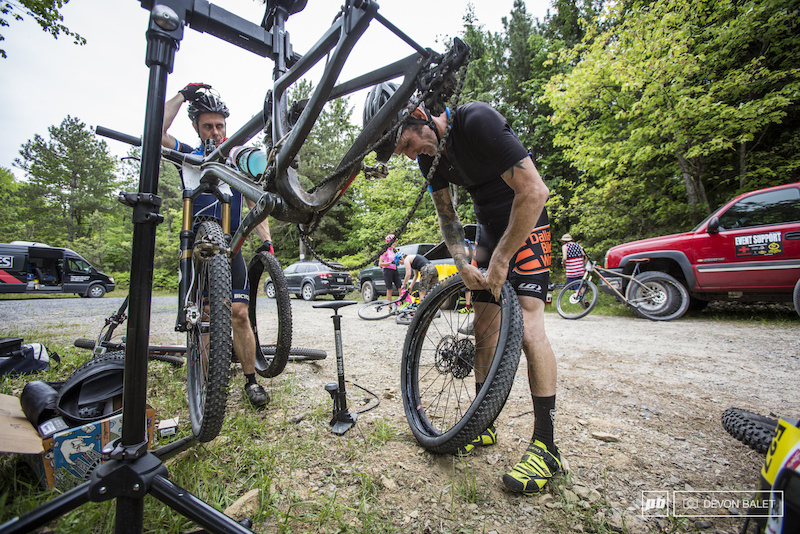 The Trans-Sylvania Mountain Bike Epic demands a lot from your tires. It will find your weaknesses. 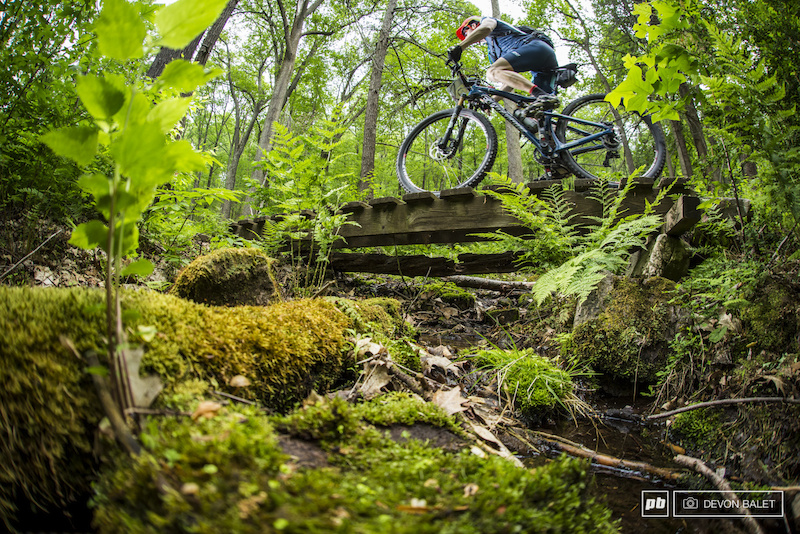 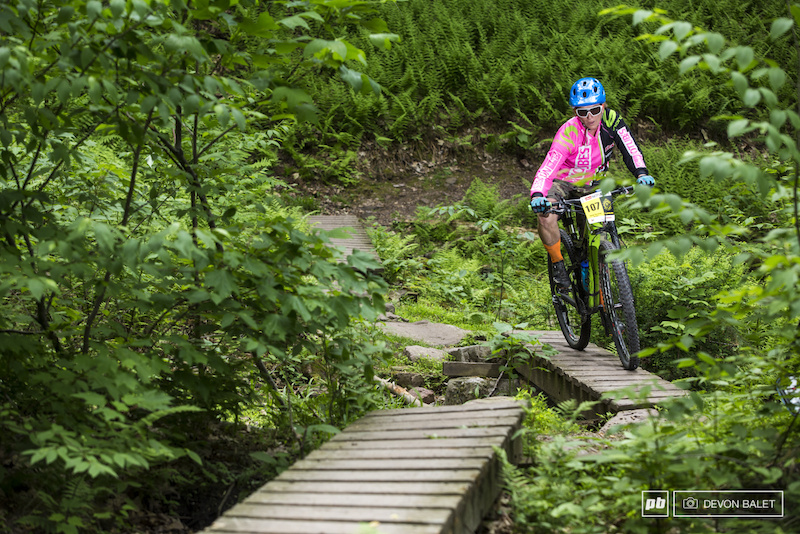 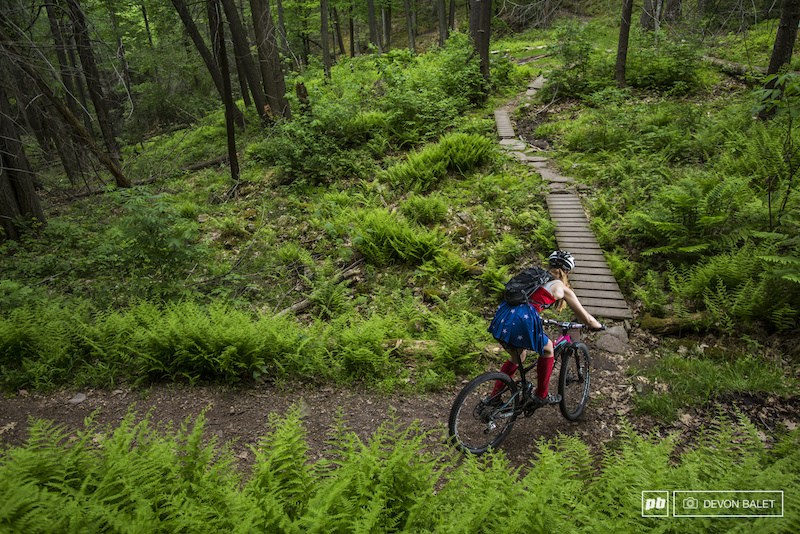 Wonder Woman, aka Jenna Emerick wraps up the day of racing on the final stage on Three Bridges Trail. 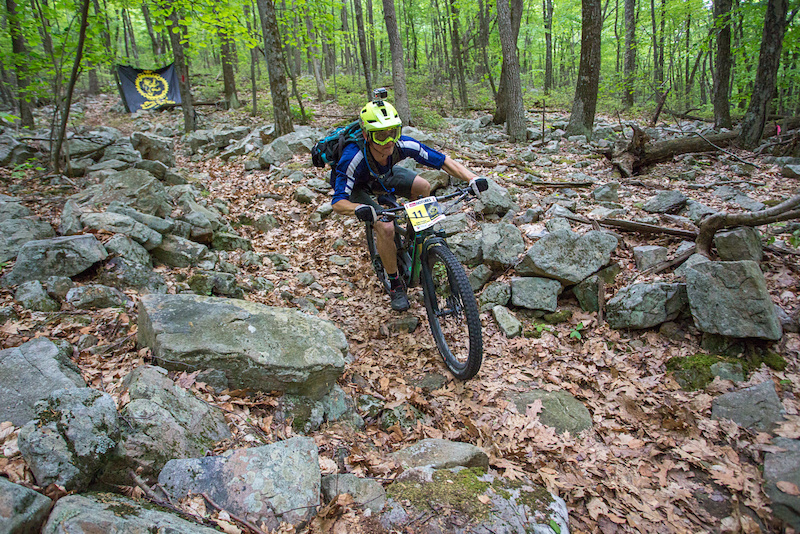 lenmerderdenfer (May 27, 2015 at 11:07)
State College, PA in Rothrock State Forest with the Tussey Mt. lodge too.
Post a Comment