by devonbalet
Views: 1,259    Faves: 0    Comments: 1
Have a seat with former World Cup racer, Sue Haywood and get your perspective of the enduro race within a race at the Trans-Sylvania Mountain Bike Epic.

The forested hills of central Pennsylvania hide steep climbs and rocky singletrack that can make for an interesting race. Stage 2 of the NoTubes Trans-Sylvania Epic is widely considered the toughest of the week, covering 37.5 miles and 5,892 feet of climbing. Despite the lengthy sections of technical trail through the Cooper’s Gap area, team tactics played a role in the results today.

Once again, Under 25 rider Payson McElveen (Competitive Cyclist) was also the winning elite man for the day. He stuck with his teammates, Justin Lindine and Tristan Uhl, then made his move in one of the East Coast Rocks timed sections.

“Today I just went in wanting to feel it out, play it a little more conservatively,” said McElveen. “We have a strong team with good numbers, there are three of us in the elite category.”

“I got the holeshot into the singletrack to stay out of trouble and just rode my own pace,” said McElveen. “We ended up getting away – myself, Justin Lindine, Dan Timmerman [Riverside Racing] and Tristan Uhl – so it was three of us and one from another team. Justin set a good tempo and we pulled away, then about halfway through I pulled away from him. Eventually I got away on the last East Coast Rocks section and tried to ride a tempo that was hard but not destroying myself, since we still have a lot more racing.”

Lindine is a five-year veteran of the NoTubes Trans-Sylvania Epic, but it is his first time here with teammates on hand. It helped, at least for a while.

“This is, in my opinion, one of the harder stages of the week. It’s long and it has so many dragging climbs where you’re putting out a ton of effort but you’re going six miles an hour,” said Lindine. “Payson was smashing it all day, and we got away. For a while, it was a nice symbiotic thing where I was faster on descents and he was faster on climbs, but that game stopped working for me… There was not enough down to the up today!”

Nevertheless, Lindine was positive about the day. “It’s nice to have many cards to play with the team. We put a pretty good chunk of time in today over everyone and that gives us a good cushion for the week.”

“The course was great. I have such an advantage since I live here,” said Barclay. “The first section was a lot of road and Mical Dyck and Crystal Anthony are just powerhouses on the road from cyclo-cross. They’re amazing. I decided I was going to keep them in sight and if they got ahead on the road, so be it. Mical got into the singletrack first, then Crystal, then me, which I was totally happy with so I could catch my breath. I knew there was a hike-a-bike so there was no point in panicking.”

From there, Barclay’s local knowledge came into play. “Crystal missed a turn, and so I got in front of her there. Mical was just ahead of me with a group of guys, but then I caught up and felt like the group was going too slow. Then, she dabbed in the rock garden and I went around her and never saw her again. I tried to ride consistently and not do anything stupid. I had an incident with a tree… whenever I lose focus and start thinking about life, I hit a tree. So I had to get back to race mode.”

“My day was interesting,” said Dyck. “This was a lot of pedalling today, so I was in survival mode for three hours. I just wanted to stop pedalling for a few minutes! It was hard. This is my first time doing this race. I’m going to suffer, I think, but I’m so excited about checking out new trails.” 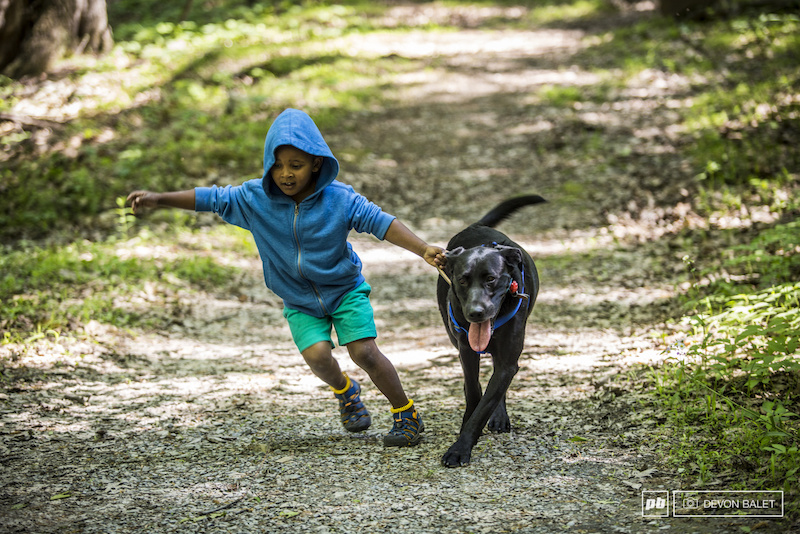 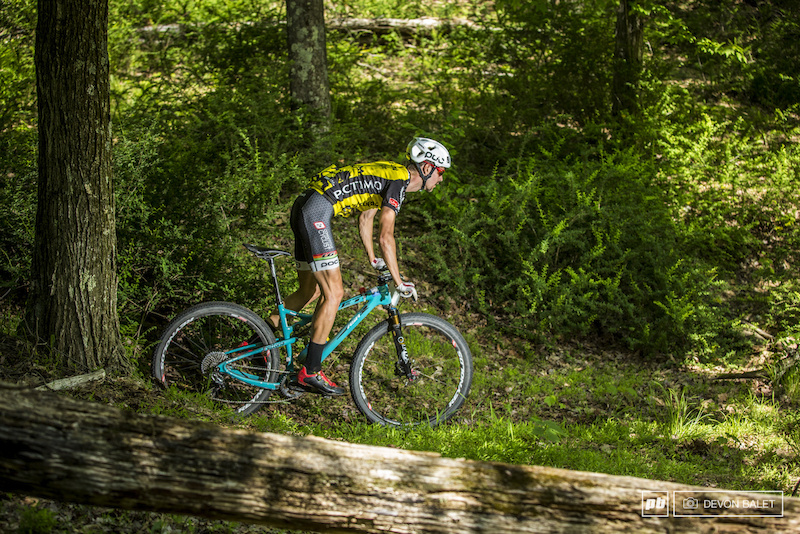 Payson McElveen seems almost too comfortable today. He has had a strong first two days holding the overall GC. 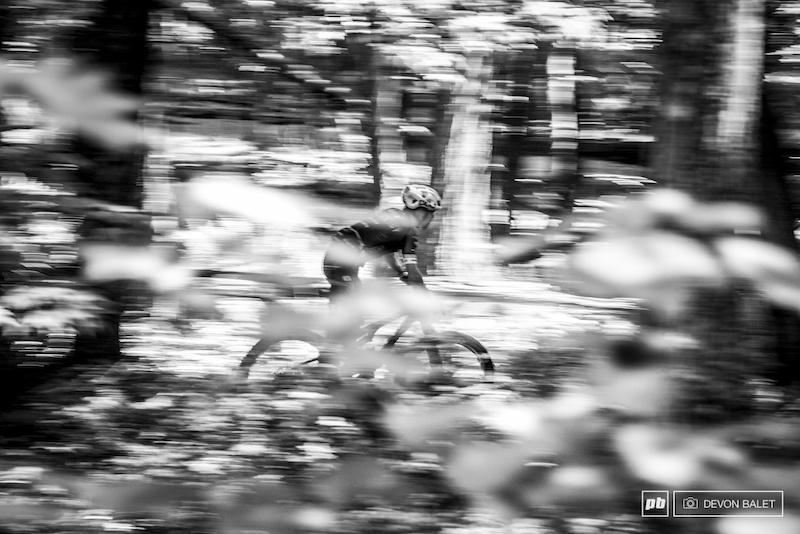 Tristan Uhl of the Competitive Cycling Team blurs through the second enduro segment of the day. 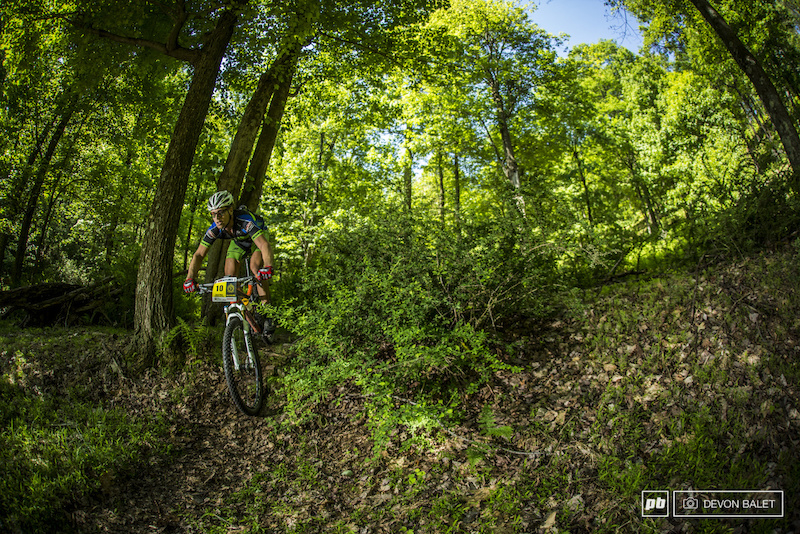 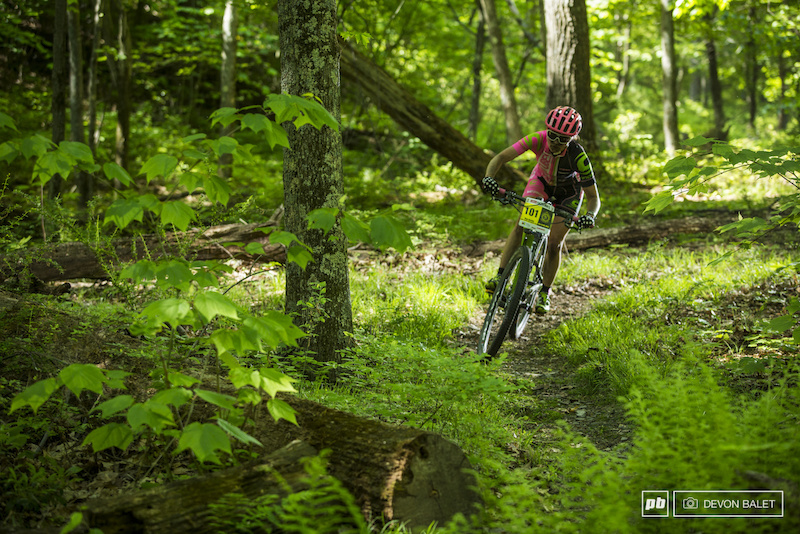 It would seem the local Stan's No Tubes racer, Vickie Barclay is on her way to walking away with the race, finishing eight minutes ahead of second. There is a long week of racing yet, so she will have to keep it clean and strong. 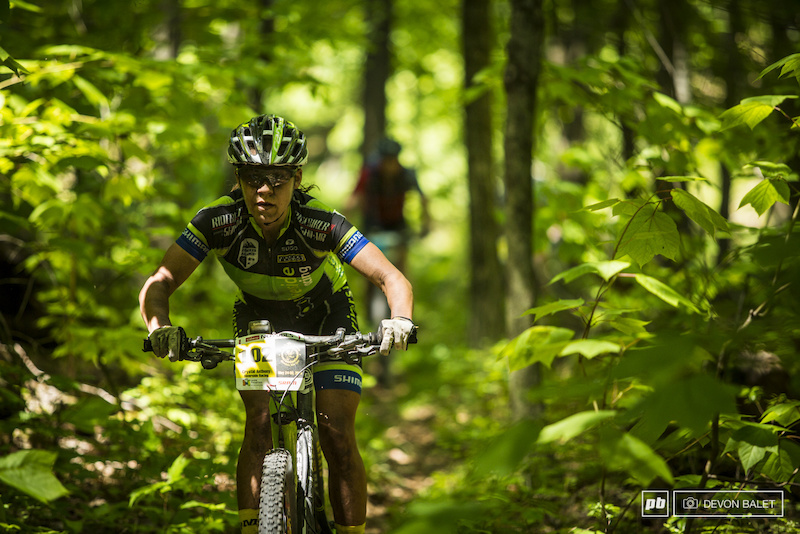 Crystal Anthony had a strong day yesterday taking the stage win. After a small crash today, she finished third. 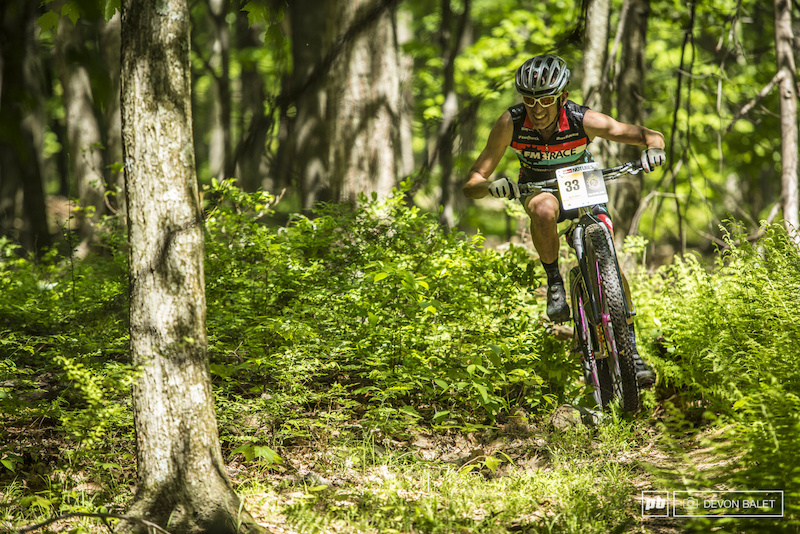 Rich Dillen, eyeing down his closest competitor Dejay Birtch. Dillen took the win for the stage, but Birtch secured the GC overall. 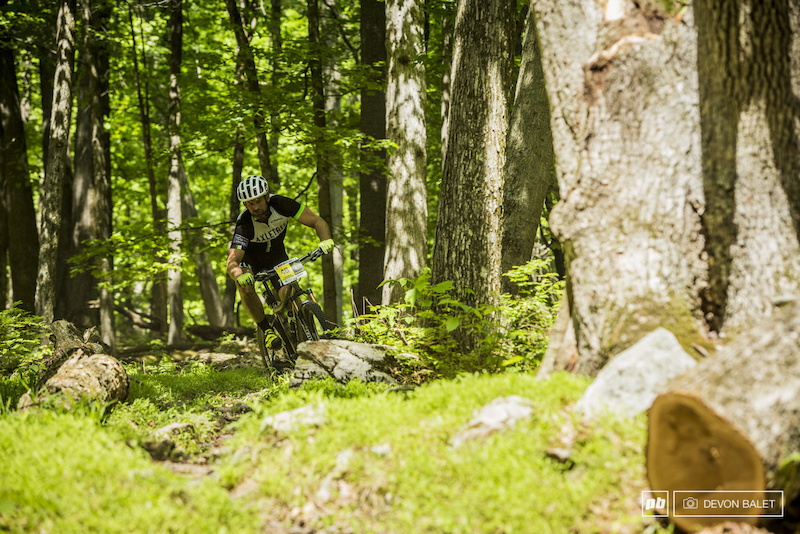 Erik Eiseman of Chicago, Illinois is one solid rider for a Midwest business man. Erik is back for his second year of Singletrack Summer Camp saying that he just enjoys the week of playing in the woods with friends. 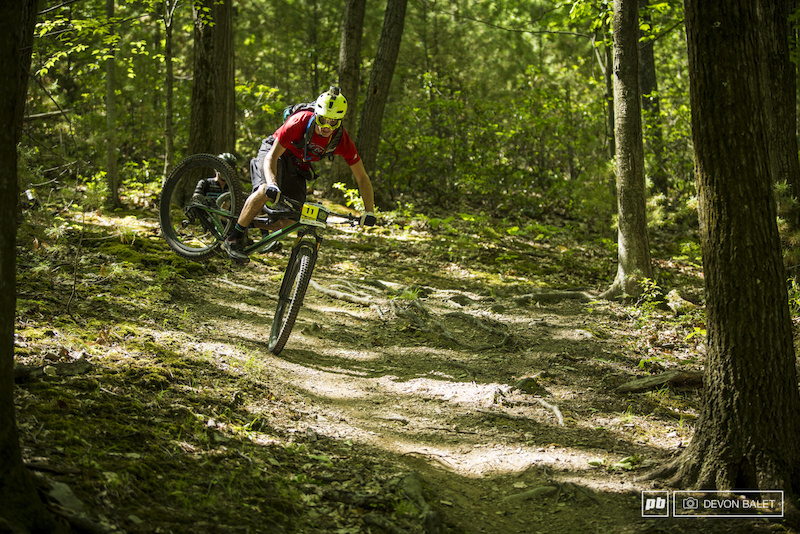 Cody Phillips of Los Angeles, California throws in a little style after the end of an enduro segment. Cody finished first overall in the enduro race, holding onto his overall lead for the Enduro GC. 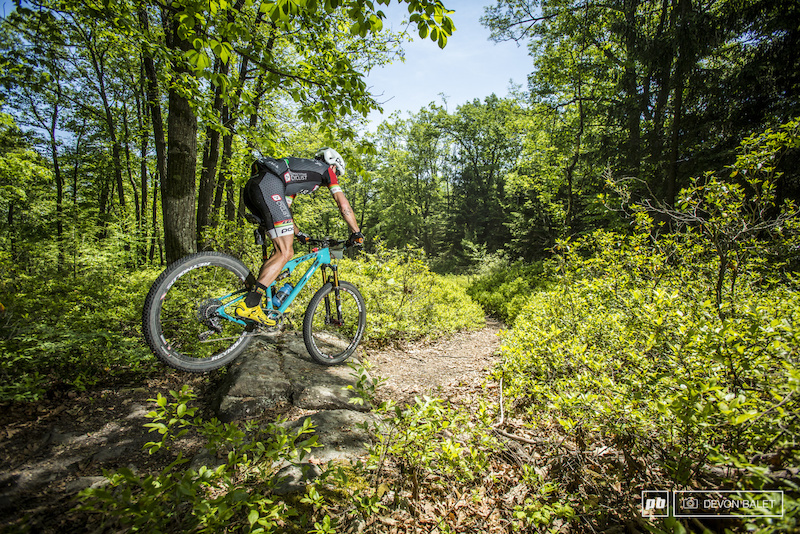 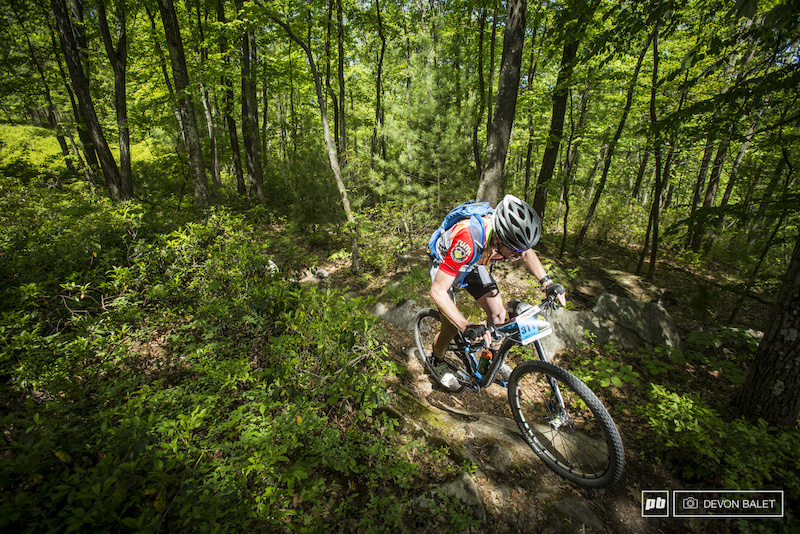 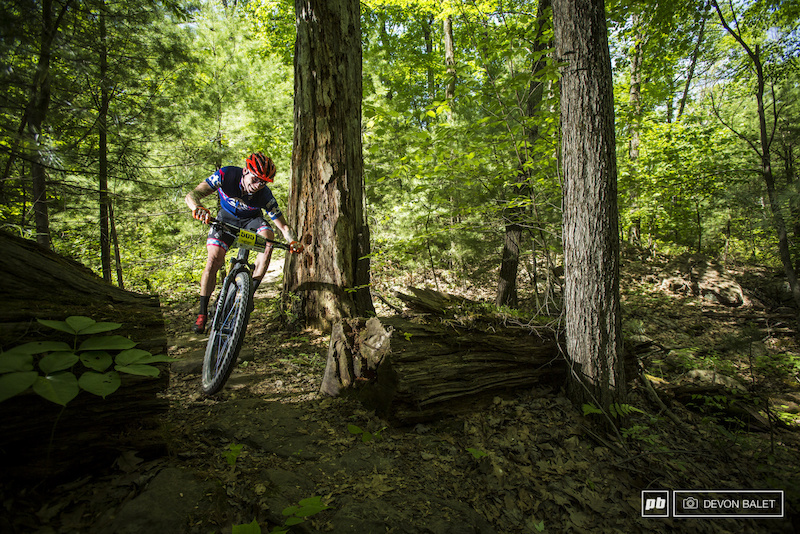 David Forkner navigates one of the East Coast Rocks sections, racing in the Epic Team category for Team CTS. 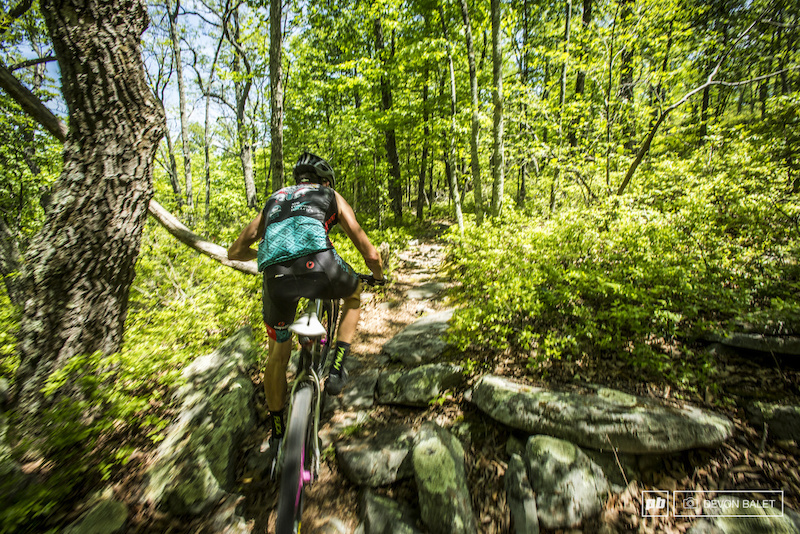 Rich Dillen had a strong day, "Preying on the weaknesses of others" as he put it, taking the stage win in the single speed race. 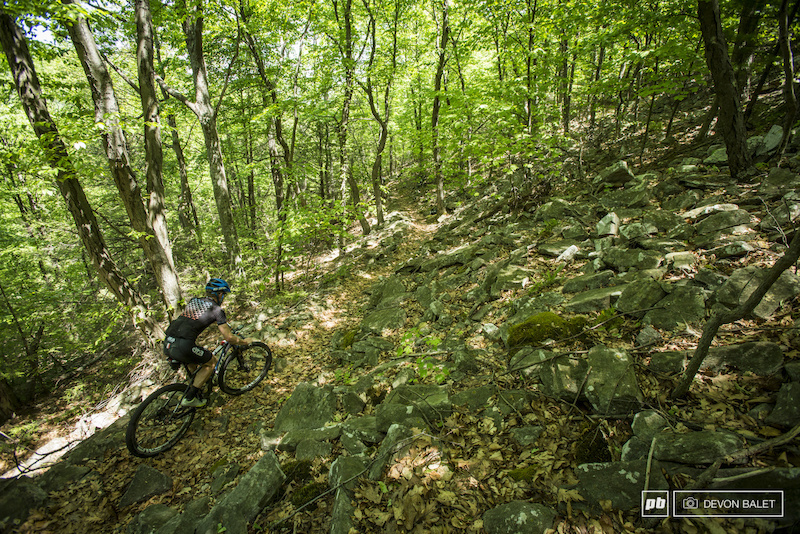 Pennsylvania, it is so full of rocks! 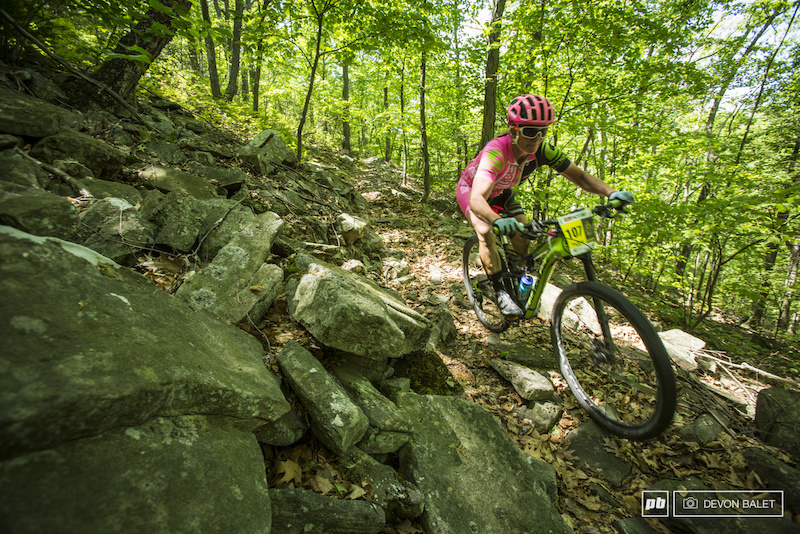 Sue Haywood of the Stan's No Tubes Women's Elite team charges down one of the final enduro segments of day. Sue is currently leading the women's enduro.

Full results can be found here.
Photos and video by Devon Balet.

AdustytrunkMonkey (May 27, 2015 at 0:21)
I wish I had her as a friend. This is a person who I would want to hang around with because of our common interest in cannondale and mtb enduro on a XC bike that smashes the line! Lefty's are awesome and solid forks. It feels good to come back to a lefty esp after 8 years. Well done. I know she can kill a course without really knowing her. Again, I can't stress enough how I wish I had her as a friend in my circuit. Cool Lady. Enough said.