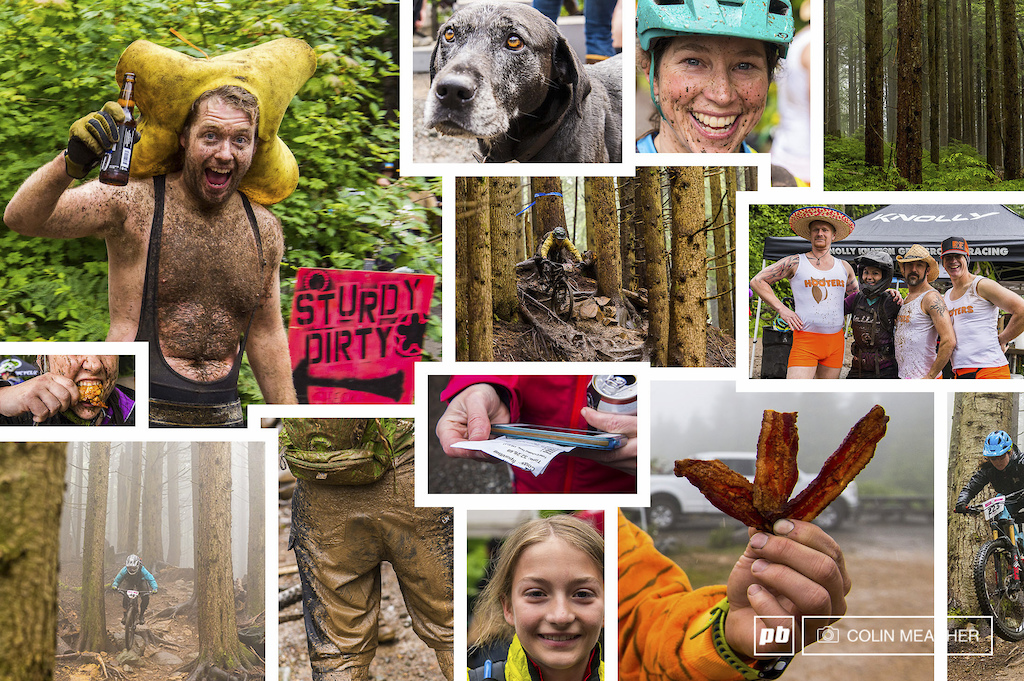 This past Saturday 175 women tackled the 3rd annual Sturdy Dirty Enduro on Tiger Mountain, outside of Issaquah, WA, a women's only mountain bike race. Naturally, Mother Nature in all her glory did not play nice. A “Junuary” forecast resulted in a high temperature of 55-ish F degrees, way more rain than anybody at the race wanted (with short windows of pellet-sized hail to make it even more "interesting"), and 15 plus miles of mud covered roots and rocks. This was my third year racing the Sturdy Dirty and despite the weather, this was by far the best edition to date. One thing of note: while most regional mountain bike races in the US are still struggling to bring in more than a dozen female racers in any one category, the 2016 Sturdy Dirty saw 26 pros, 44 experts, 102 Sport racers, and 60 Beginners registered. And while we weren't hammering through muddy knee-deep ruts like the racers at the Crankworx Les Gets DH race, the wet course did provide a challenge that pushed most of us outside our comfort zone. But despite the weather, "Rad was Had!"


A bit of background: Registration for the Sturdy Dirty opened this past February and the race sold out in a record 28 hours. To say this is a popular race is an understatement. I was nervous enough about claiming my spot this year that I made sure to set a timer well ahead of the registration day as a reminder to sign up. A twenty-eight hour sell out is definitely not Downieville All-Mountain Classic ridiculousness, but filling all the allocated spots of a women's only race within such a short window shows just how much enthusiasm and support the race has garnered in its brief history.


The race organizers, the Sturdy Bitch Racing team, are a Seattle, WA-based mountain bike race team comprised of 5 dedicated women who donate gobs of time that they probably don’t have to make this event what it is: an amazing and fun day for all the participants, both racers and course volunteers. They, along with the title sponsors, Liv Cycling and Evergreen Mountain Bike Alliance, deserve a big thank you for putting together one of the most well-organized and popular races of the PCNW race season. By far, the one thing participants comment on as setting this race apart is that it brings together such a diverse crowd of female mountain bikers, from first-time racers to seasoned veterans. And more and more, the reach of the Sturdy Dirty is expanding, with racers coming from as far away as Big Bear, CA, Flagstaff, AZ, and Calgary, AB. As Liz Cunningham, a pro from Breckenridge Colorado noted, "Typically we (women) are in the minority at a race... when I'm at an event, there are often times only 10 women in my category, if that. Here there are sixteen pros, but there are so many beginners.... It's awesome to feel this level of support."


Who races the Sturdy Dirty? A cross section.

This year’s race had two-course flavors, a slightly less technical four-stage course for the Beginner and Sport categories, and a slightly longer four-stage course for the Expert and Pro categories. The Beginner/Sport racers started their day with a short pedal up the access road to Lower Predator, their stage 1, which dropped them back down to the staging area at the base of Tiger Mountain. Immediately after, they climbed 1700 vertical feet in four miles to the summit of East Tiger Mountain to drop down the East Tiger Summit trail and the Off the Grid trail, followed by Fully Rigid and Joyride trails, and then capped it all off with a romp down a new, and as of yet unnamed (and NOT open to the public) trail. Meanwhile, the Expert/Pro ladies started their day by punching right to the summit of East Tiger Mountain, tackled all the trails waiting for the Beginner/Sport riders, and then climbed almost all the way back to the summit to take on the steep and technical lines on both Upper and Lower Predator.

I have to admit I was a bit nervous about racing "Predator" in the rain - we apparently have a deficiency of roots where I live in Oregon. And while I had pre-ridden the trail the evening before the race, I was not feeling super confident on one line in the wet weather. Specifically, a steep, technical, root-choked section somewhere near the middle of Upper Predator that was as slippery as a fish in water. I'd like to say I greased it, but when I finally got to this section on my race run, I just didn’t have it in me. Erring on the side of caution, I opted to jump off and run it vs. ride it. And of course, where do you think the photographer decided to shoot everyone? Yep, right there. Luckily, as one of the first ones down, he missed me on that section, but not everyone was so lucky. With that in mind, I had the chance to scan through the photos and was happy to see that:

a) I wasn’t the only one who walked that line, and
b) walking it might have been the better choice, but
c) some of the ladies cleaned it making the rest of us feel slightly inadequate.


At the end of the day the pro winner, Liv’s Jaime Rees completed the four stage course in 30:21.13 followed closely behind by Juliana Ambassador Emily Sabelhaus with a time of 30:21.36, a mere quarter of a second behind Jaime. Or to put that into perspective, 2 pedal strokes behind Jaime.


What do I find so inspiring about this race? The fact that there were 35 beginners and 91 sport racers who completed the course on Saturday. They made up more than 50% of the field. What drew them to this race? For many it was the desire to find other female riders. There were two organized pre-rides scheduled this year on top of a day before the race clinic for up to 100 ladies put on by Liv Cycling. The biggest fears I hear from women about why so many women won’t race the co-ed series is because they don’t know what to expect of the course, and they are intimidated by the large quantity of men that are typically pre-riding and racing alongside them.

adybee7 (Jun 21, 2016 at 11:37)
Great write up Nikki and awesome photos Colin! We couldn't be happier with how the race went off and how everyone (riders and volunteers) overcame the challenging weather. Time to get planning for next year...

katiejac (Jun 21, 2016 at 12:28)
Great write up and awesome pictures! I never get to be on course to see the action so reading this and seeing these photos is so fantastic. Thank you!!

bedell99 (Jun 22, 2016 at 12:59)
I hope people understand how gnarly that root section is in the middle of Predator when its dry. In the rain it basically unrideable. Mad props to the ladies owning that section.

kamsbry (Jun 23, 2016 at 9:31)
I helped dig that section out of the duff almost 2 years ago and smiled with glee when I imagined people riding it in the wet. It's everything I hoped for.

Pininator (Jun 22, 2016 at 1:37)
The race organizers gave Evergreen MTB Alliance a $3,000 check to cover trailwork after the race. Plus, what the other responses say above mine.

tsheep (Jun 22, 2016 at 9:09)
Tiger mountain is as close to a weatherproof trail network as you get. I was on the trails the day after the race and you couldn't really tell there had been a race. Granted, there's a dedicated group of awesome trail workers who do a lot of maintenance, but they've done an amazing job of building to deal with water.
Below threshold threads are hidden

Which never made much sense to me....Until I had kids.

niksaunders (Jun 21, 2016 at 19:47) (Below Threshold)
@preston67: Other sports aren't obliged to let girls play all the time... Your local senior men's hockey team doesn't let women play in their games I'm sure. Don't lie, you ride to get away from your wife sometimes and there's nothing wrong with that.