Day 2 of Trans-Cascadia stretched out over 18.1 miles of riding for Stages 6-11. The course sent racers backwards on the first three stages of Day 1 around Lake Timpanogas, which included some surprises; like a straight line down the scree field they hiked up yesterday. It may be the same trails but in reverse it has a different attitude, according to Lars Sternberg who raced in 2015 and is now back as a crewmember. 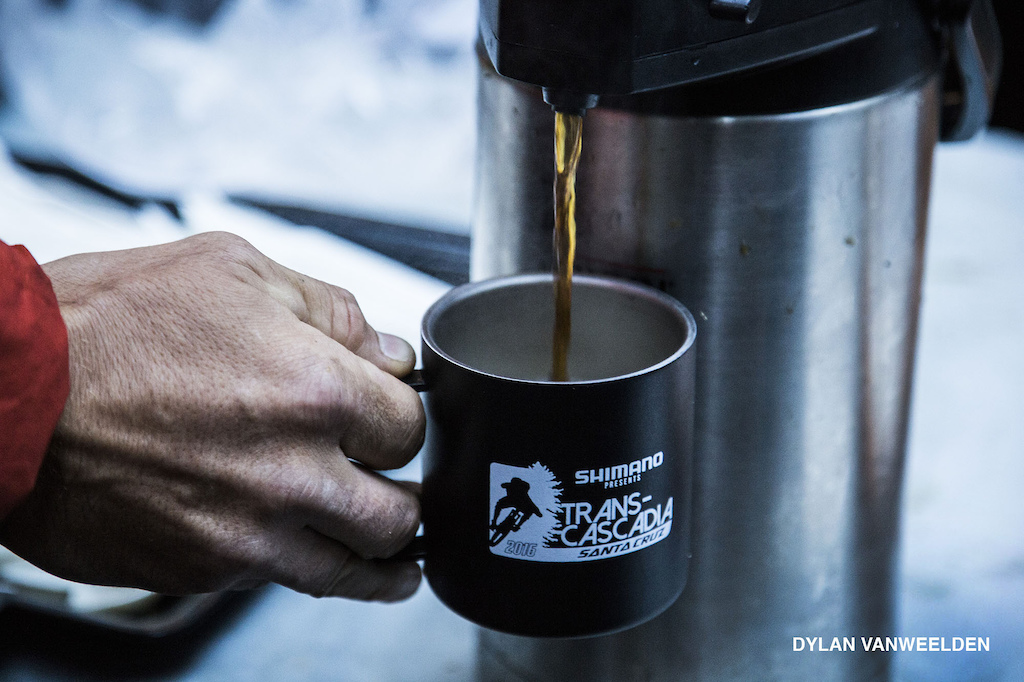 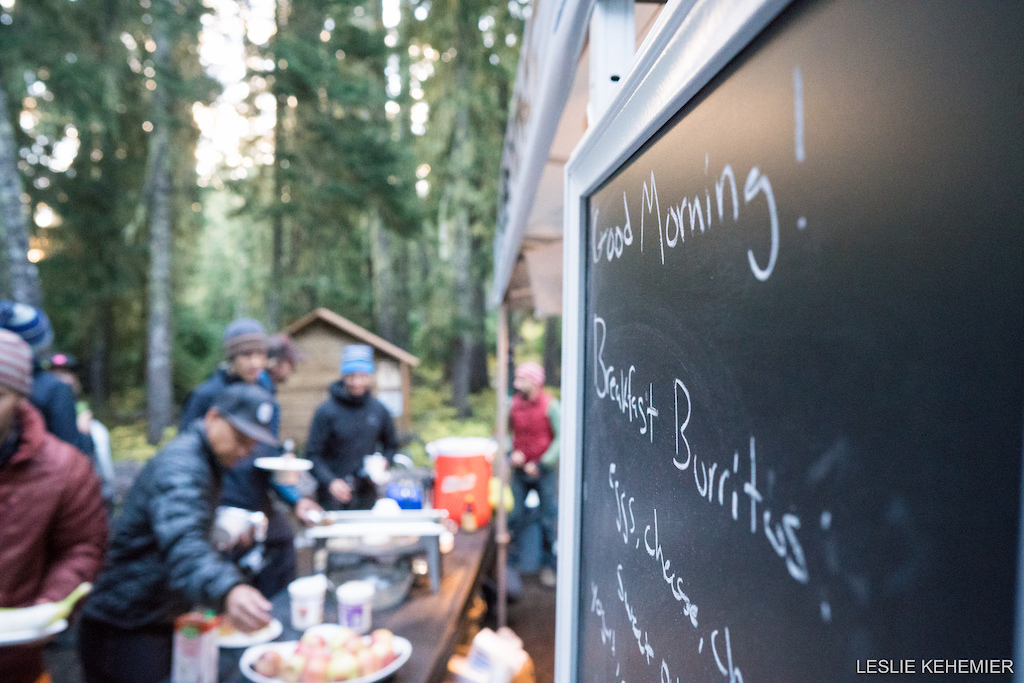 Next racers headed out on Middle Fork from basecamp for Stage 9 before being shuttled to the top of Moon Point for Stage 10, and then up to Larison Rock for Stage 11. Lars explains the transition that the racers experienced today, “when you exit the Lake Timpanogas area you are immediately greeted with a completely different style of trail and environment. The Oakridge trails are really dry and hard packed – loose and sketchy – whereas up at the lake it’s soft soil with a lot of organic and you can do no wrong with your cornering. So these racers went from hero dirt to Middle Fork, which keeps you on your toes, not too steep, but more meandering, to the two sketchiest trails around Oakridge. But they are also the most fun and are super fast.”


The logistically heavy day made for an early morning – and a fairly quiet camp last night, despite the abundance of Steigl on tap and readily available bottles of wine from Clif Family Winery. Racers rolled out of camp starting at 8am, many shivering in the brisk fall air. 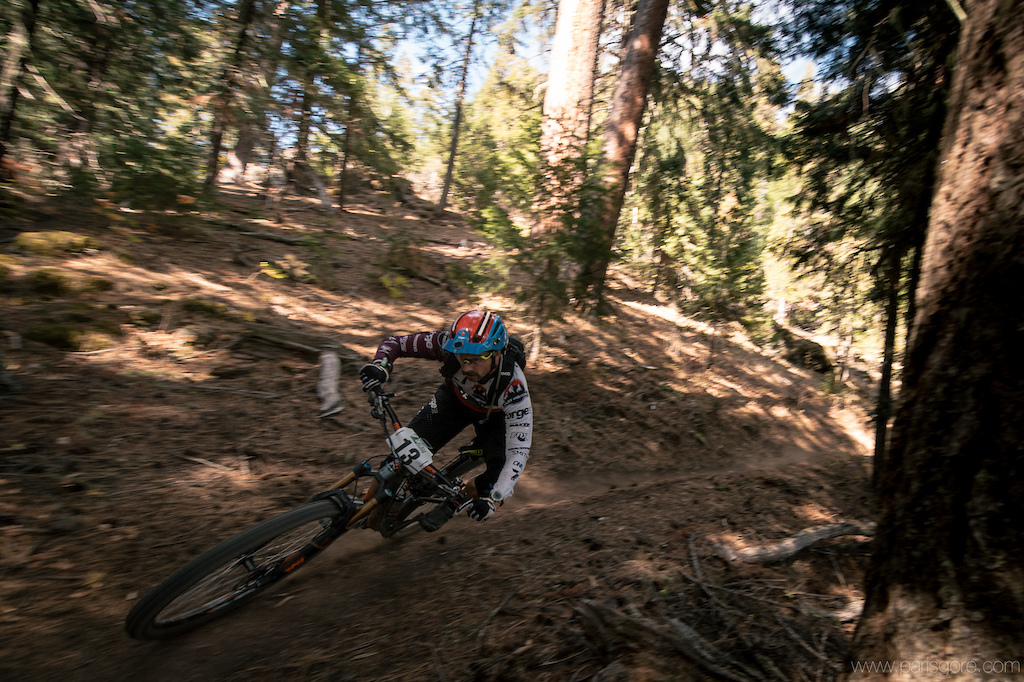 Peter Ostroski Smashing through Stage 10 on his way to a third place overall. 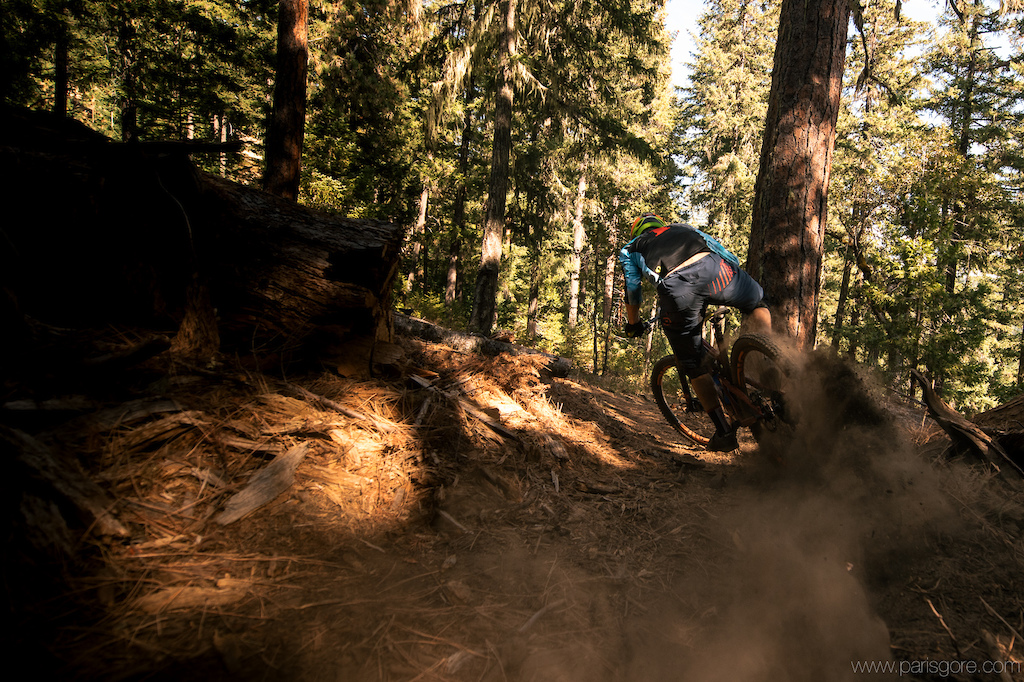 Chris Johnston blowing dust on the Moon Point stage which was a much looser trail than the last few days. 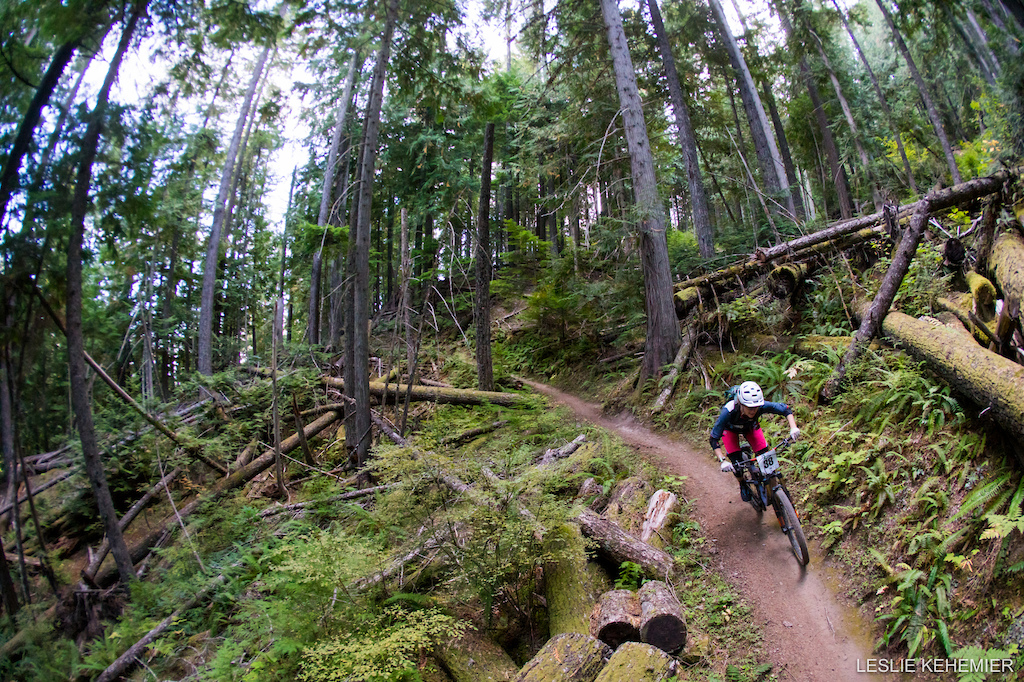 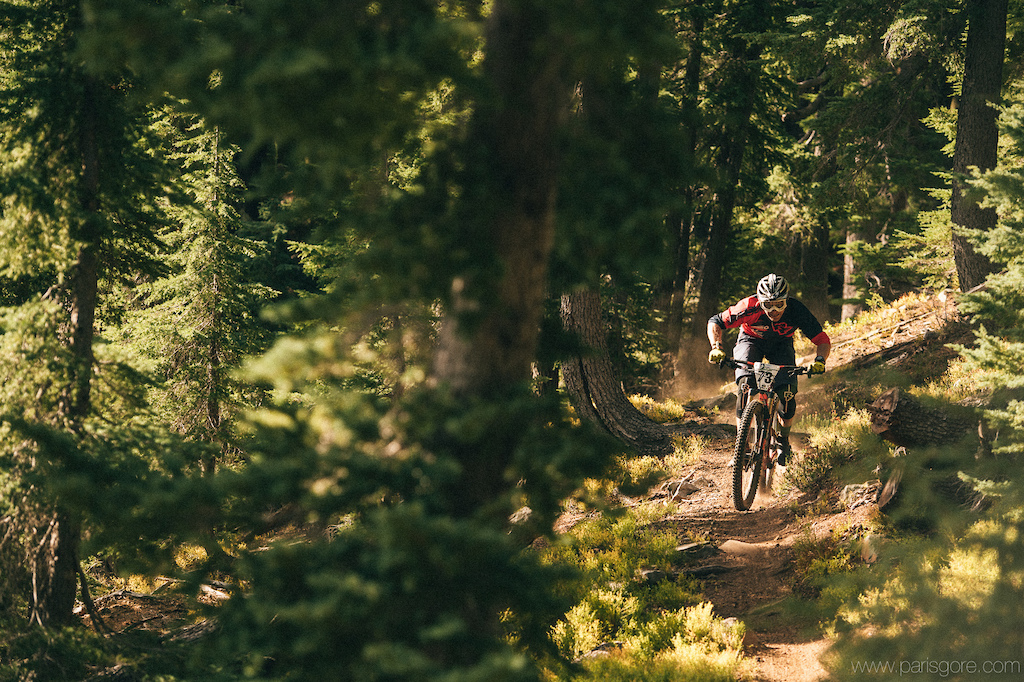 At the start line, Trans-Cascadia veteran, Mark Weir was looking forward to today’s stages, “I don’t expect too much, I expect to have a good time and to try not to slap. And maybe make a couple positions up if I can, because today is more gravity fed. And I want to have fun and get to the bar at the end!” Mark arrived this year with much less prominent facial hair than last, but he was quick to explain that the shave was due to split ends, and not for aerodynamic purposes. 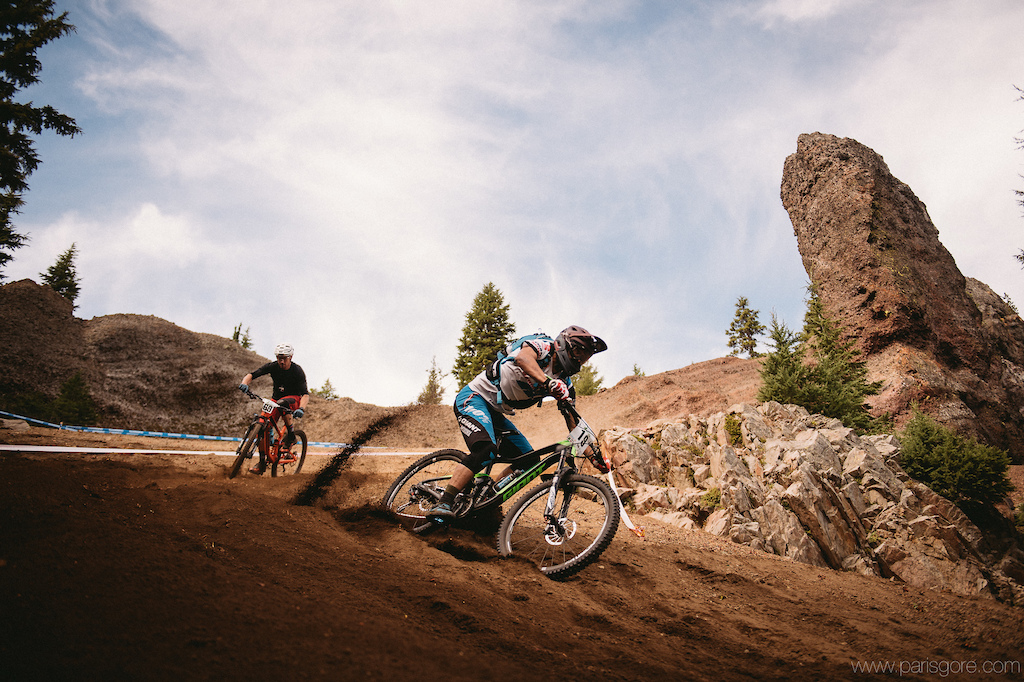 Adam Craig leads out Lars Sternberg, who isn't racing, but is in charge of keeping moral up. 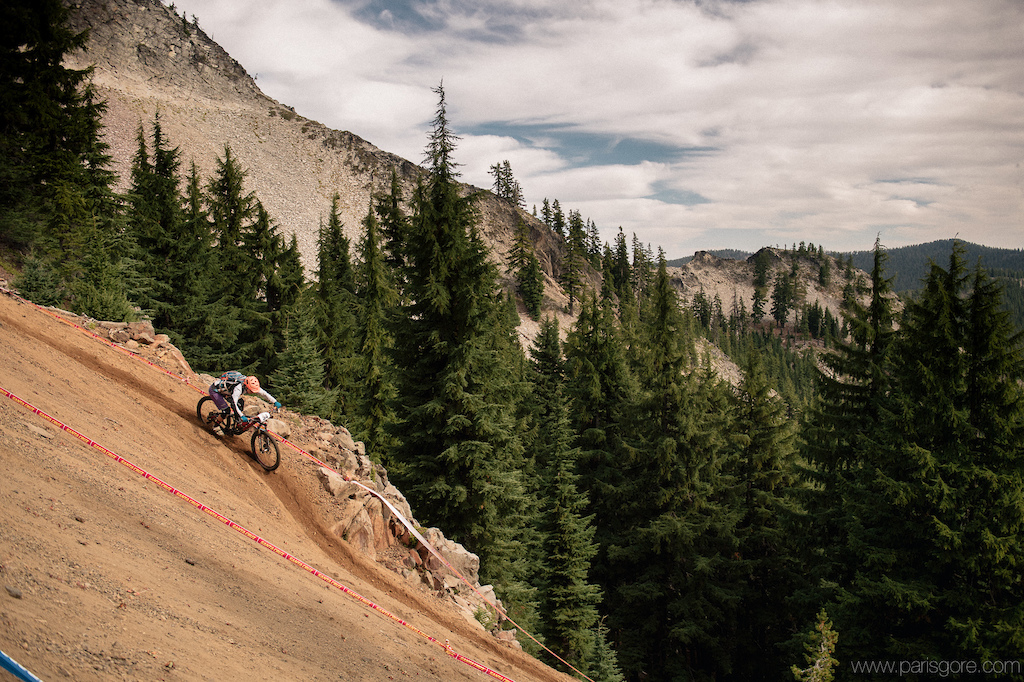 Freeriding through the scree slope. 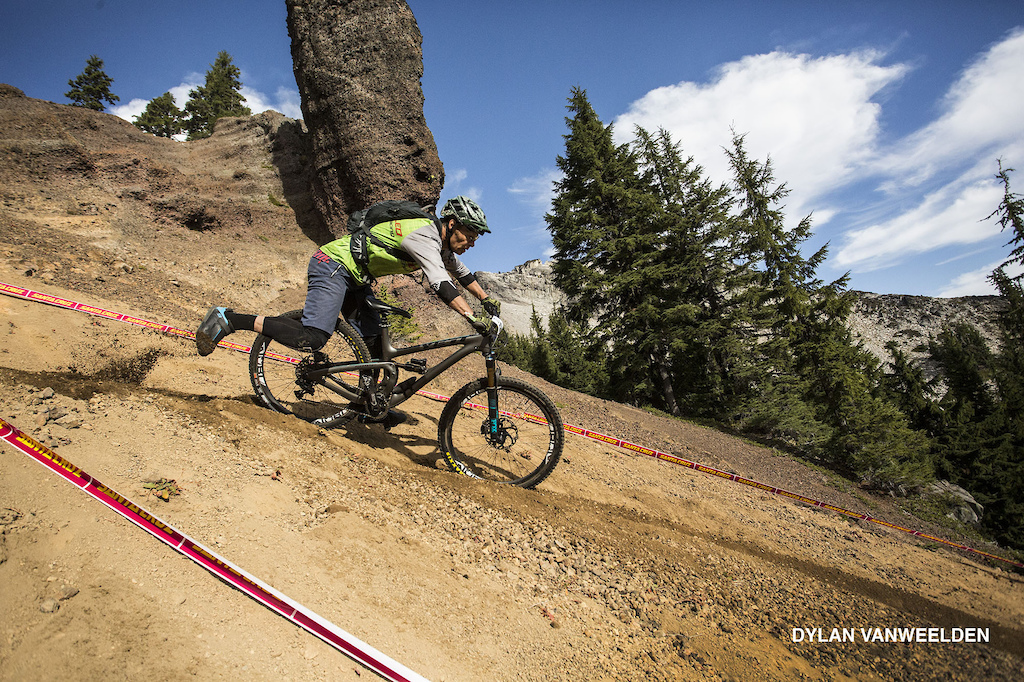 Lots of foot out in the scree field.


By the end of Stage 10, Whitney Anderson, who’d had the lead in the Amateur Women’s field after Day 1, had firsthand knowledge of the change in terrain. She described the stage as having lots of pedalling, lots of drifting through loose stuff, some rocks, and a few stream crossings. “Today I was pushing a little too hard because I thought Amanda was hot on my heels and I took myself out – I slid out in a corner in a loose clear cut. I definitely had to take a deep breath and take it down a notch.” Whitney also discussed the challenges with this specific format of blind enduro racing, “I had no idea where I was yesterday. When you’re racing with a bunch of people you don’t know, on trails you don’t know, you have no idea where you are in the mix. It was a complete unknown. And the stages I felt worst on, were my best stages. You have to push yourself but be able to reign it in at the same time. If you’re going way too hard that’s when mistakes happen, but if you slow down too much you’re no longer racing. It’s the fine line of pushing yourself and backing off just a little bit.” She finished in third place today, behind Corey Schmid in 2nd place, and Amanda Schaper in 1st. 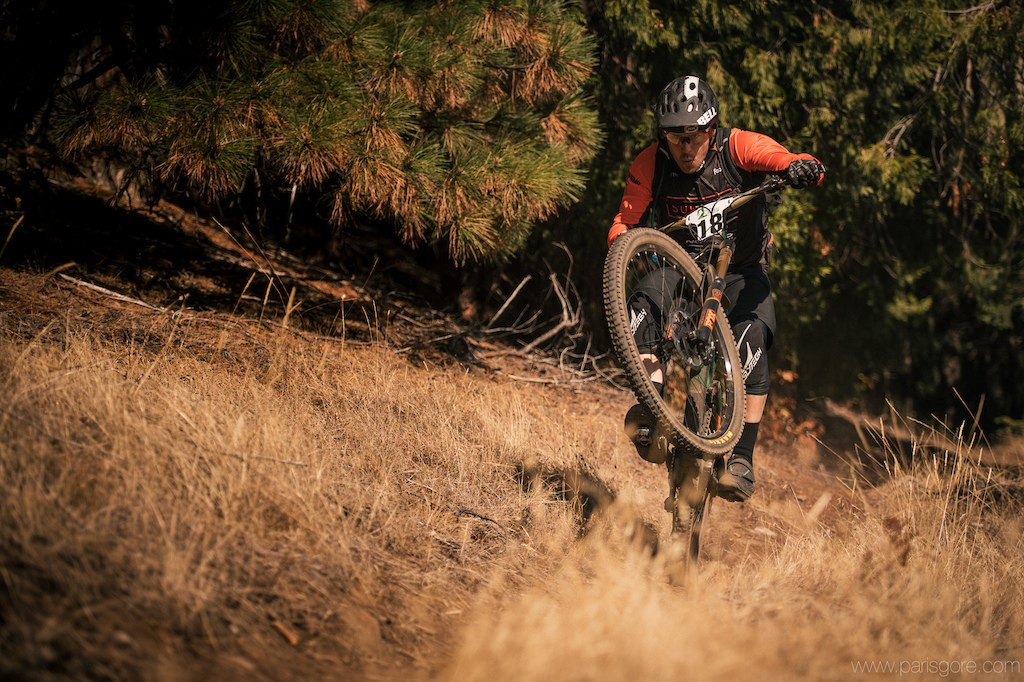 
Barry Wicks also had some challenges with today’s change in dirt quality, “I don’t even know what happened, I was just going really fast – well, for me, fast – and I think it was changing from all the wet dirt that we were riding up high, into that dry stuff, and I was just going a little faster that I should have been. I kind of tomahawked into the trees and came to a stop with a broken off branch jabbed right into my neck, but not quite puncturing it. It would have been gnarly if it had been an inch closer.” 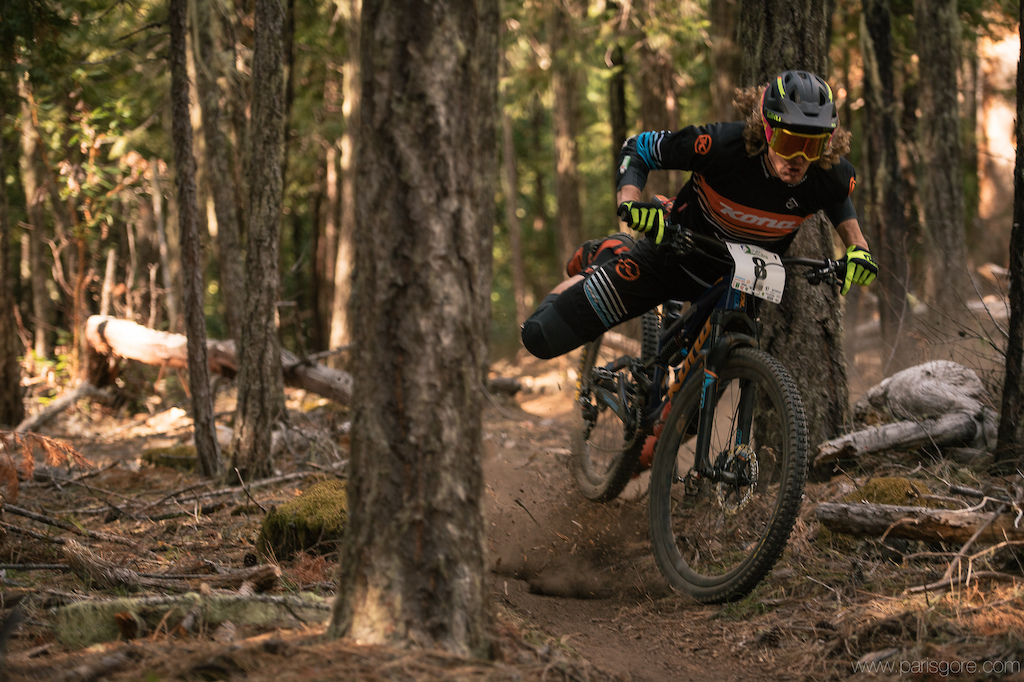 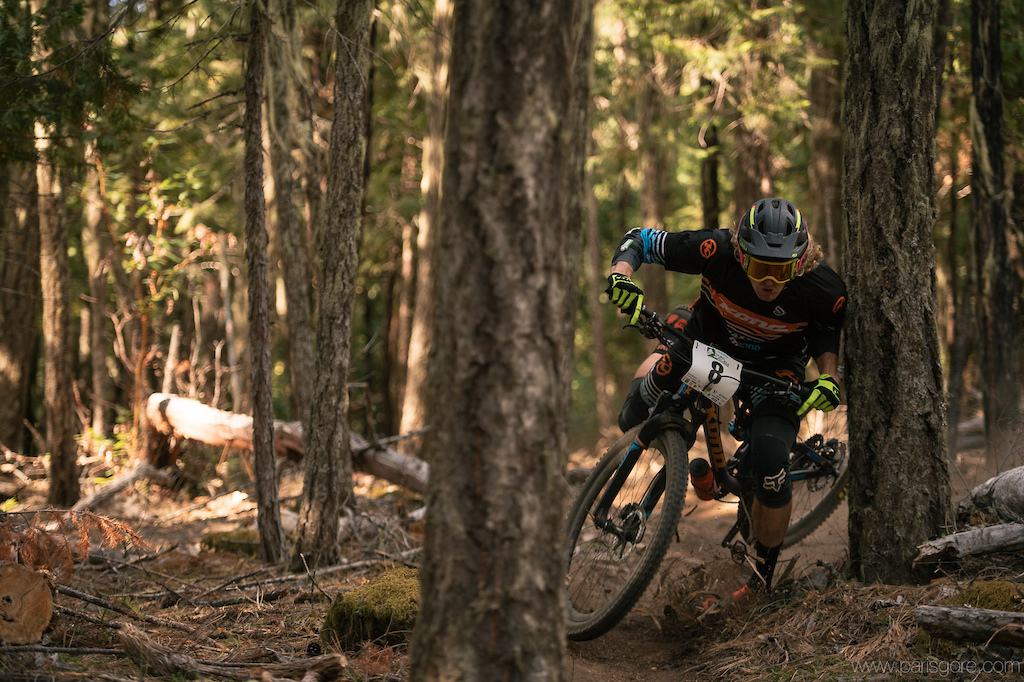 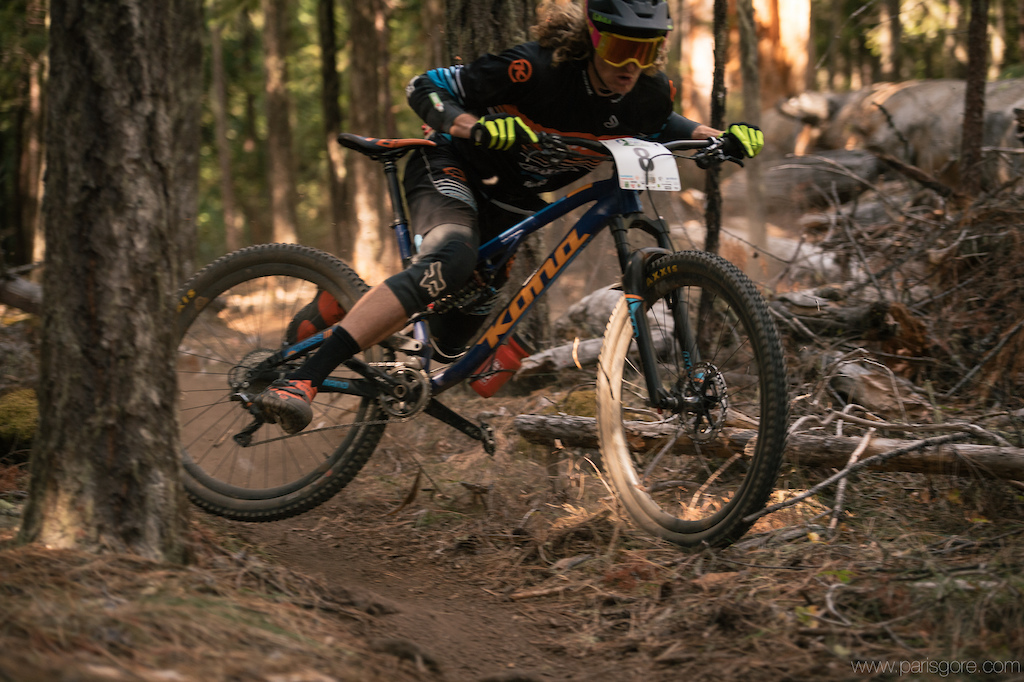 Barry Wicks tomahawks into the trees.
The evolution, or devolution, of the dirt today didn’t have any impact on Rosara Joseph’s winning streak. Tonight she was awarded her seventh straight leader jersey – and it should be noted that there have only been seven to win since Trans-Cascadia’s inception. In 2nd place in the Pro Women’s category is Kathy Pruitt, followed by Meggie Bichard in 3rd.


There was a shuffle in the Pro Men’s category with Geoff Kabush taking the lead over Chris Johnson, and new to the podiums was Peter Ostroski in 3rd. “The first couple of stages were short and hard to feel like you’re going fast, but the last two long ones felt like you could really settle in and get into a rhythm,” said Geoff about his 28 second lead over Chris on Stage 10. As a returning racer Geoff had some knowledge of the stages raced over the last two days, “I don’t remember the trails, but I kind of remember the rhythm and how long you have to keep pushing.”

Tomorrow's stages are completely new to all racers, even those who raced last year. Basecamp is buzzing with speculation and anticipation, and Chris and Geoff are both looking forward to continuing their battle for the top step on some fresh – even never before ridden – trails.

tbmaddux Plus (Oct 1, 2016 at 7:29)
Bottom of Moon Point really opens up and gets fast and rough. One of my favorite descents in the area.

Cronarkom (Oct 1, 2016 at 17:47)
Sounds like it went from flooded tent to hero dirt on Grasshopper this morning