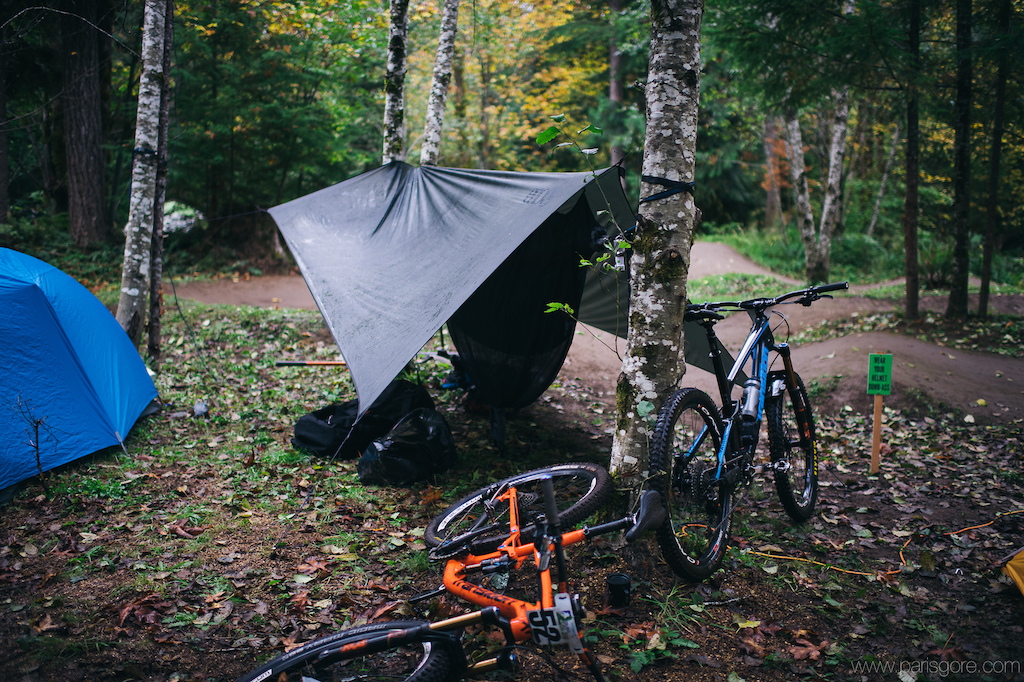 Racers opted for everything from mansion-esque dome tents to bivy sacks and hammocks. 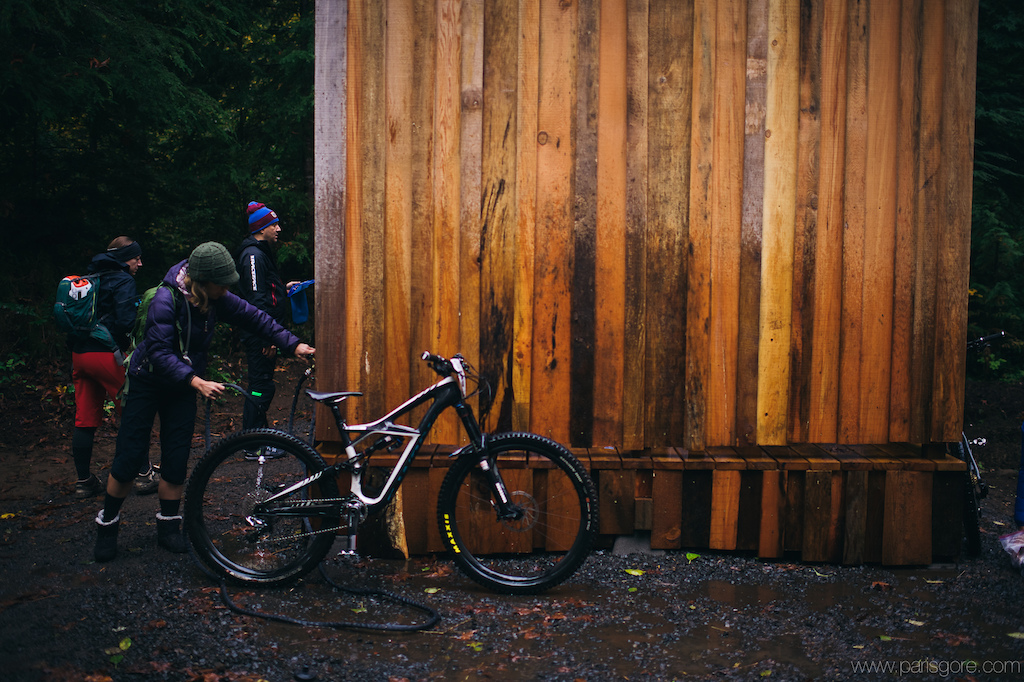 The facilities at Horse Creek Lodge were a welcome site to tired racers.

After a long day in the rain, sleet, snow, and slippery river crossings, the happy, but exhausted group cheered when the event organizers announced the cancellation of a stage for the final day. “Because we are ambitious, Day 4 is an ambitious day,” started Nick Gibson, “but we are going to be slightly less ambitious and cut out Stage 16.”

Day 4 was still a monster of a day with over 10 miles of riding, much of it on an exposed ridge at 5500 feet in snow and freezing rain. Racers – who were relieved to have a later start time – were shuttled up to start a roughly 1.5-hour liaison stage across the ridgeline to the top of Stage 17. Here racers started a descent that had expected fast times of 30 minutes and arrived at the bottom where fires to warm freezing hands were already burning. 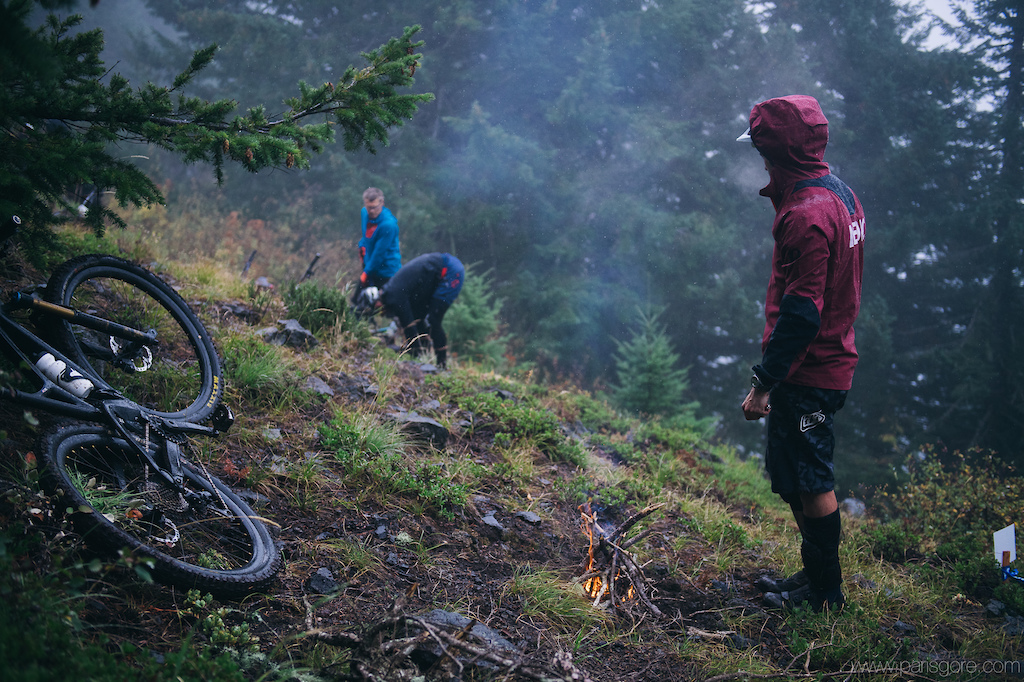 Start of stage 17 was high up and exposed to nasty weather. Billy Lewis and Nick Hall got the fire going for racers to keep warm while they wait to drop in. 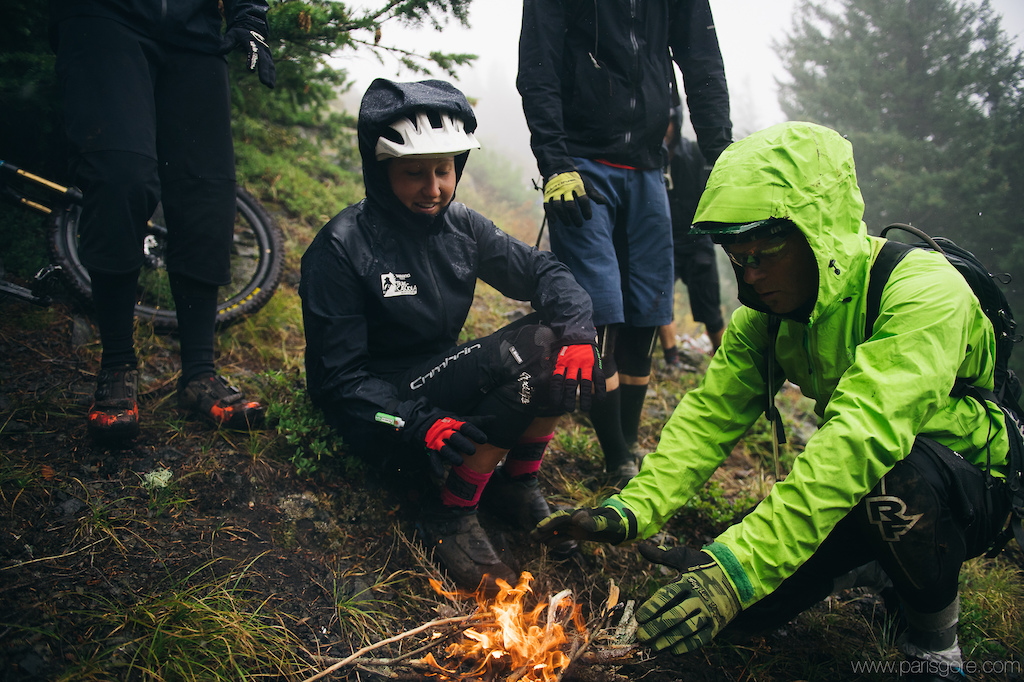 Warming up before dropping into the first mega decent of the day.
A short liaise between Stage 17 and 18 took racers to their final descent of the race – 15 minutes of a flatter grade, but high-speed trail. It was the perfect trail to end on and left everyone smiling and congregating around another warm fire with beers in hand. 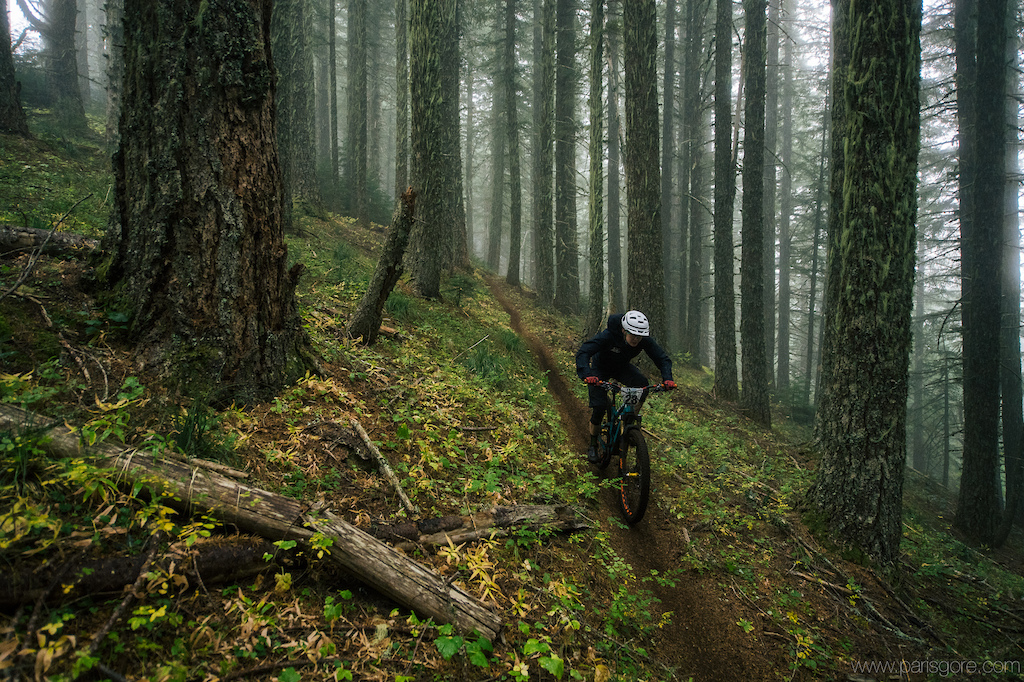 Kim Hardin back on the trail after a slight detour yesterday of taking care of her husband Nick Hardin who broke his collar bone. 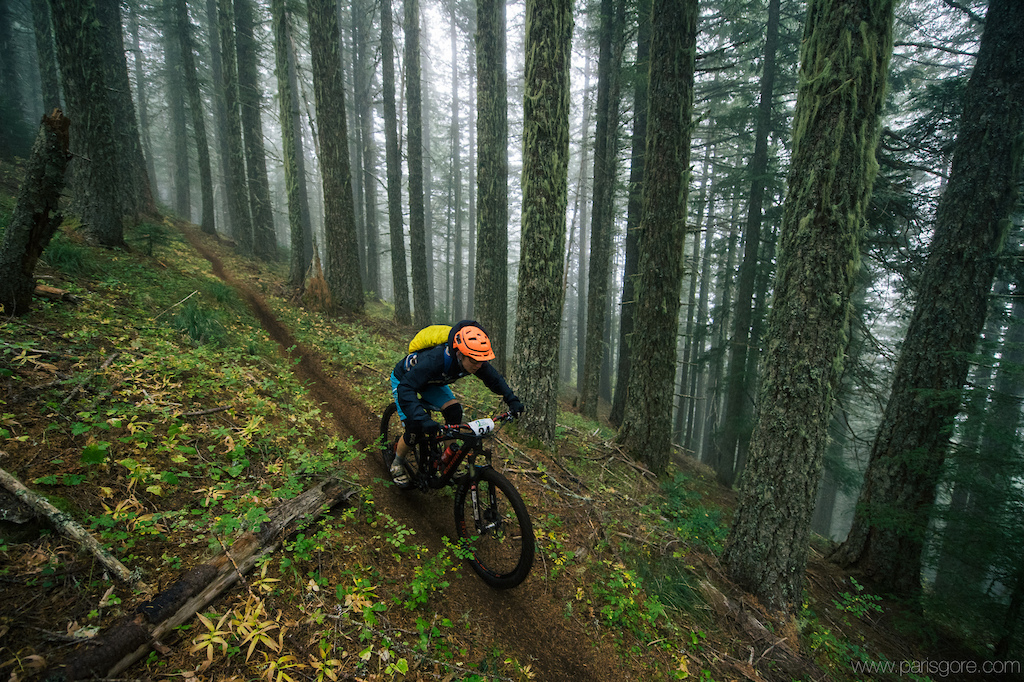 Charging through a long Stage 17. 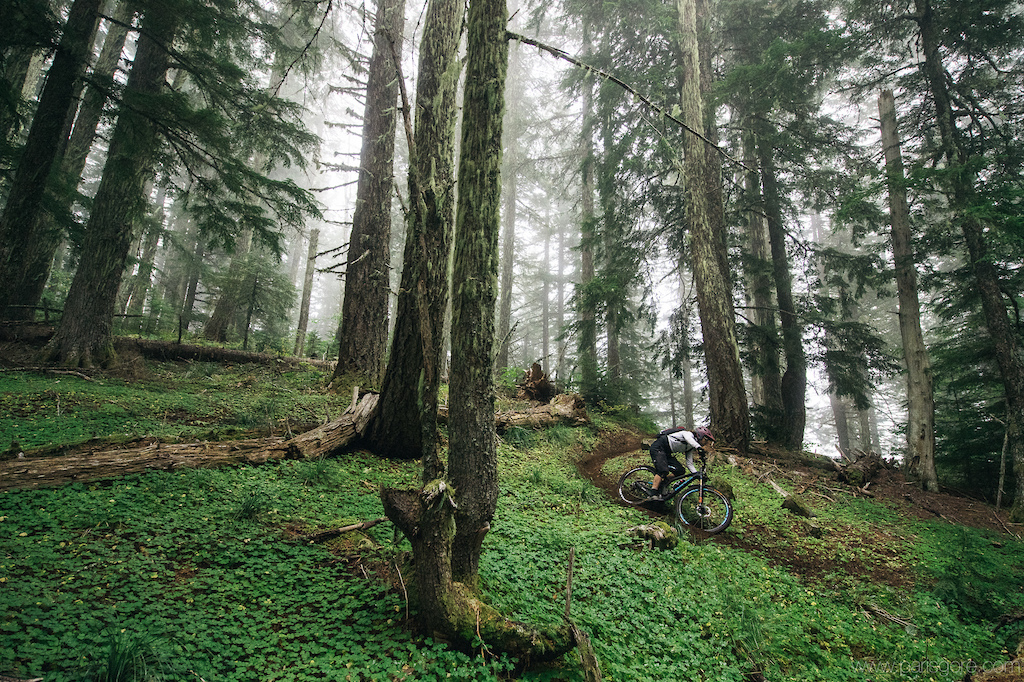 Aaron Bradford making his way down the upper half of stage 17. 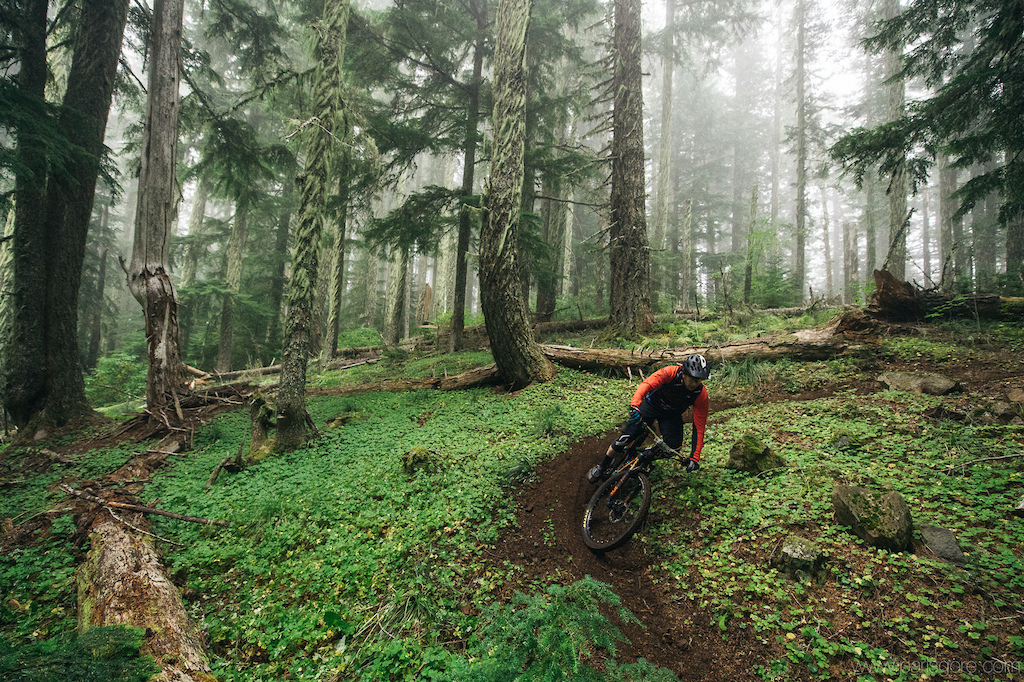 Bryn Atkinson isn't used to this style of racing with his World Cup DH background, but sure got the hang of it and gave it all he had. 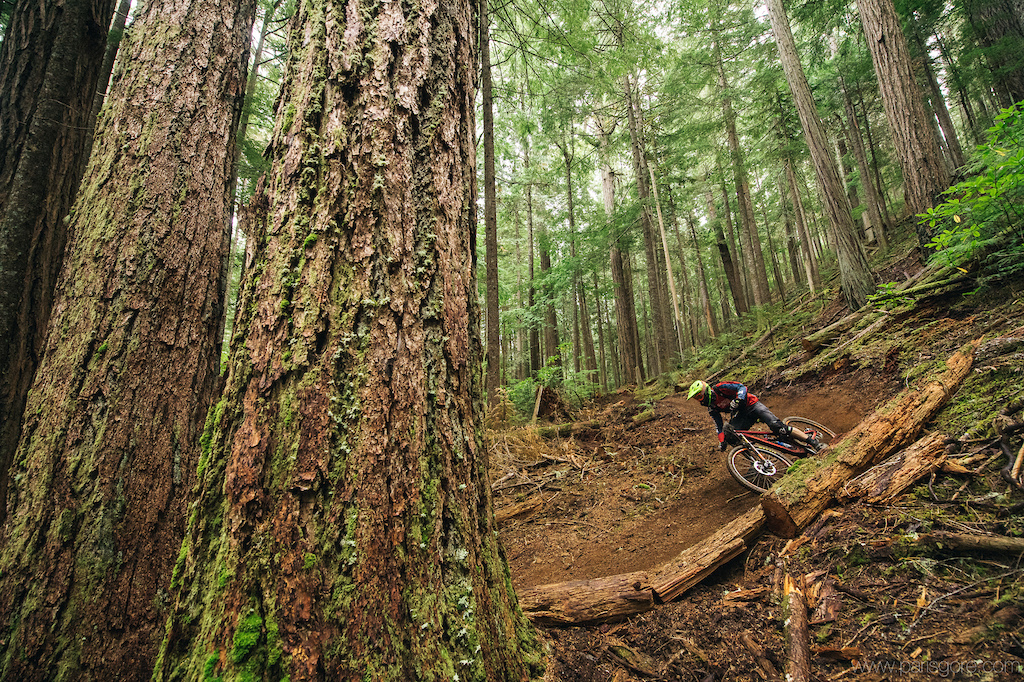 Chris Johnston railing a cedar dusted corner which sits up next to some very old trees. 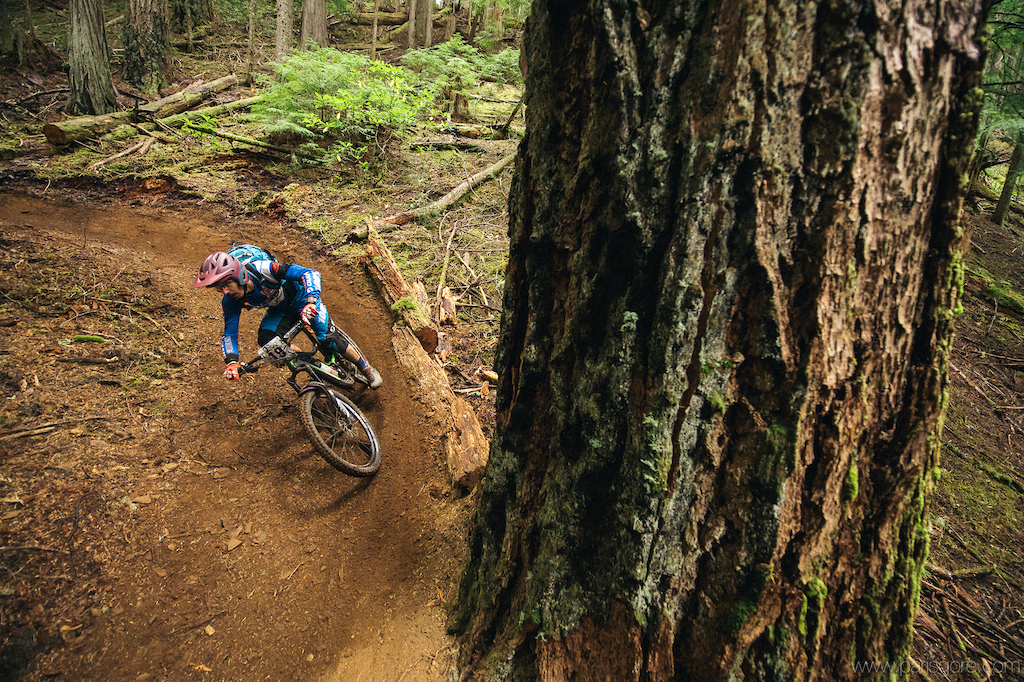 Adam Craig on the last stage of the 2016 Trans-Cascadia.

Barry Wicks experienced the weather on the way to Stage 17 firsthand, “at the top on the liaison from the bus it was definitely raining and snowing; ‘wintery mix,’ I think is the correct term. It was really cool up there. It was nice that we were pedaling a bit, so it wasn’t too cold.” As for the choice to drop Stage 16 from today’s agenda, Barry thought the right call was made. “I’m pretty tired, it would have been hard to do another couple of hours out in the woods. Erring on the side of safety is the right way to go.”

“It was all types of weather out there, we had snow and sleet at the top. And there was a fire going at the top as well, so it was nice to warm your hands before you dropped in,” said Chris Johnston holding his celebratory finish line beer. “It was a super long stage, but not quite as long as estimated so I think a lot of us crossed the line with a bit of extra gas in the tank and could have gone a little bit harder. The second stage after that had really good flow, you still had to pedal hard to maintain that flow, but it was a really cool way to end the week.” At the start of Day 3 Geoff Kabush had a 55 second lead over Chris, “It will be really cool to see how it all pans out. I know I gave it my best, so whatever happens, I’m stoked!” 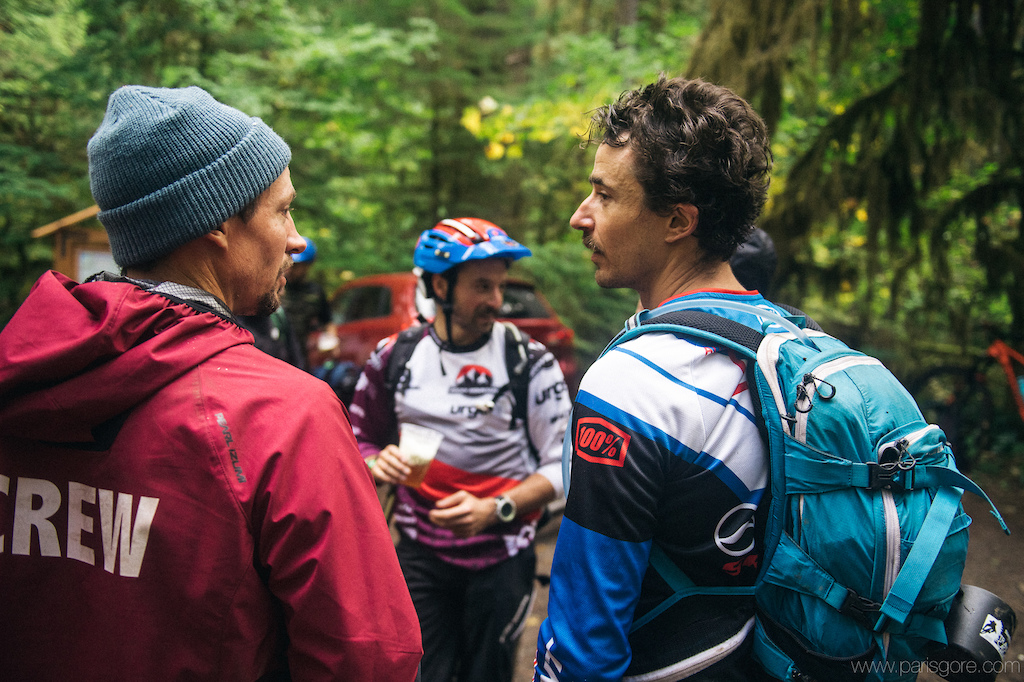 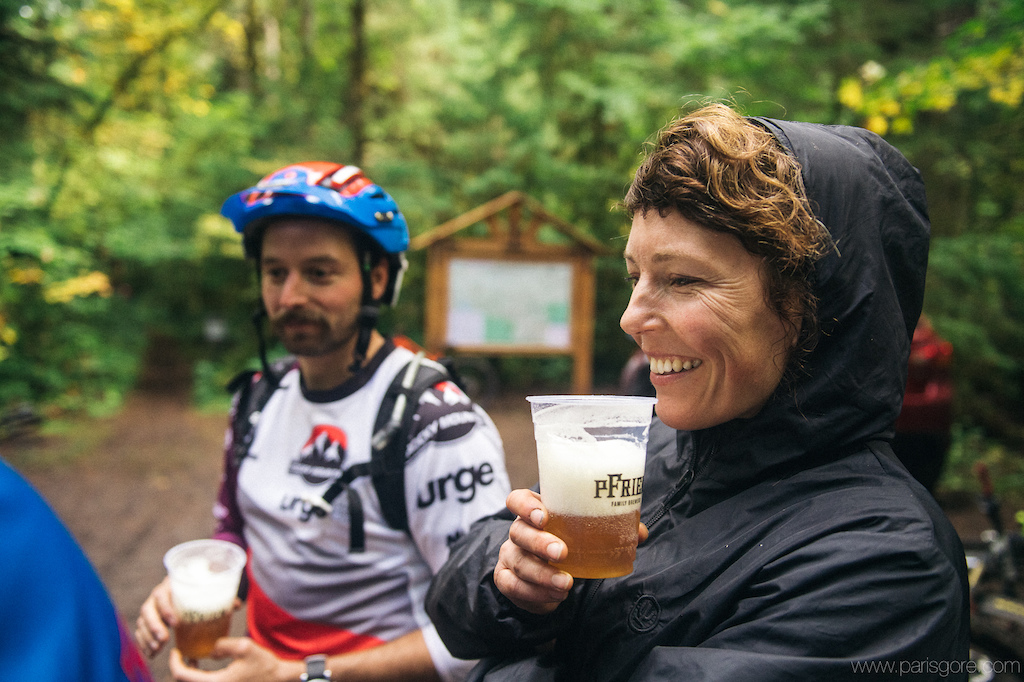 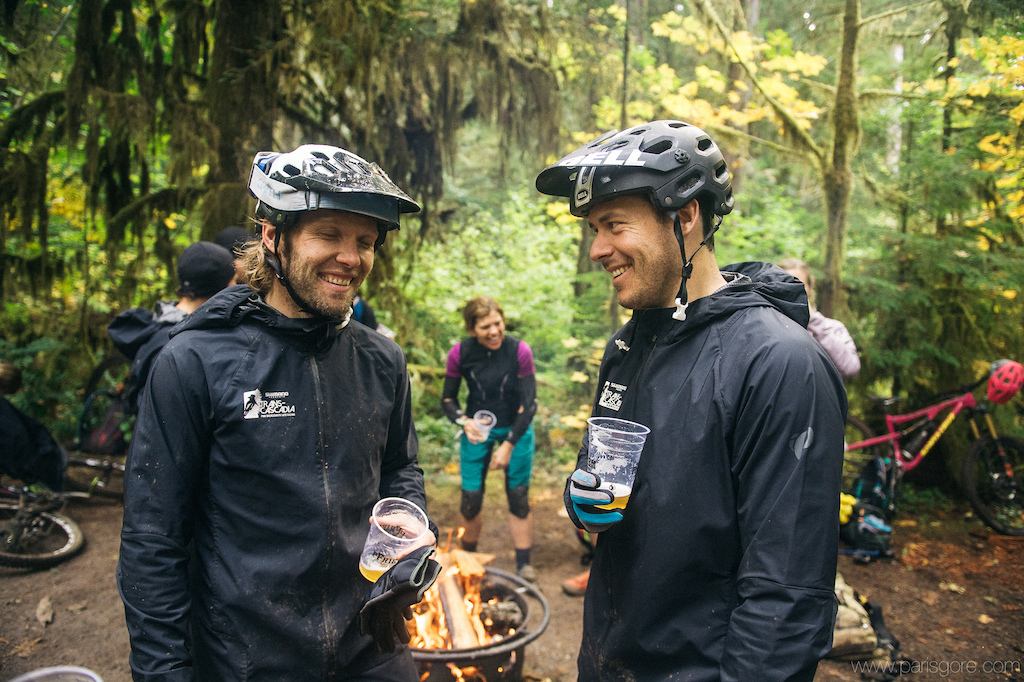 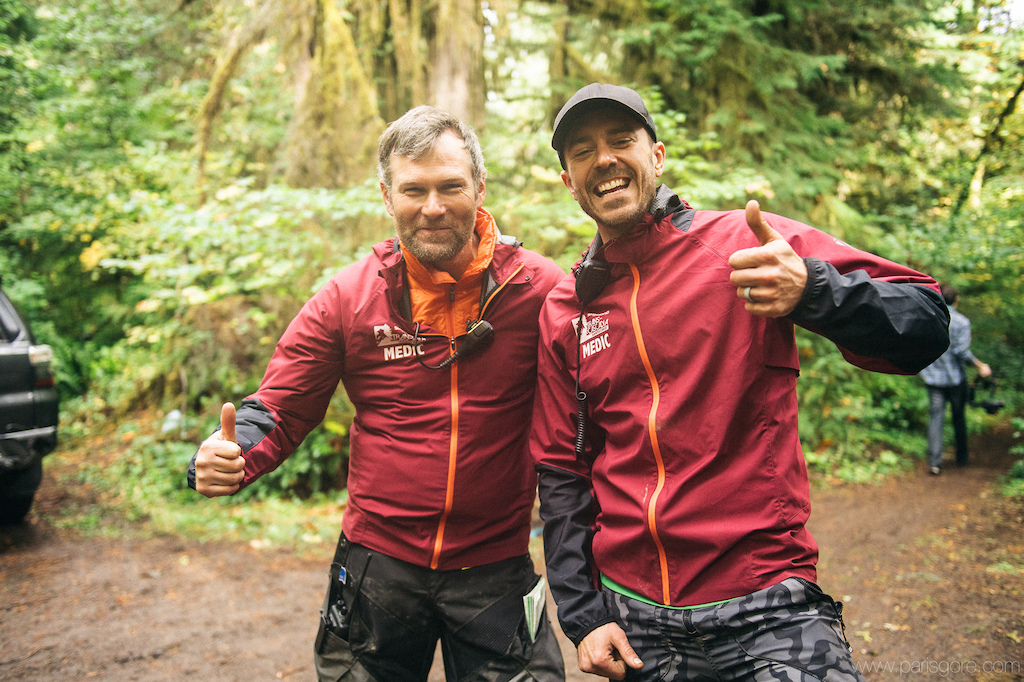 Big thanks to the medic staff this week, Ben and Nick were both outstanding with their support and quick response.
In the end, Geoff Kabush would take the overall win and after finishing 2nd last year, he says he didn’t have any expectations coming into this week, “I just wanted to come down and have some fun! These guys put on an awesome event in a really fun place to ride. I rode the trails as fast as I could and I think it went pretty well.”

Rosara Joseph won her second consecutive Trans-Cascadia in the Pro Women’s category, “I felt like this year was definitely a step up in terms of the challenge; the trails that we rode were more physically and technically demanding, the days were longer and there was some more gnarly stuff on the trails. And we had the great privilege of riding some brand new trails and that was super exciting. I think people – specifically these last two days have been big days – have definitely been challenged but everyone is buzzing and it’s such a cool atmosphere and I really admire the attitude of everyone here who took part.”


This year the Trans-Cascadia event expanded their area and, in working with local organizations, was able to open and use new trails to provide a more diverse racecourse. Like every true adventure, there was adversity in the form of injuries and weather, but there were also incredible views, descents, competition, and of course basecamp life. When all was said and done yesterday, everyone gathered around the campfire to celebrate, not just the success of the entire 2016 Trans-Cascadia field, but also their shared experience over the last four days – and it would seem that the times around the fire generate the richest of memories. 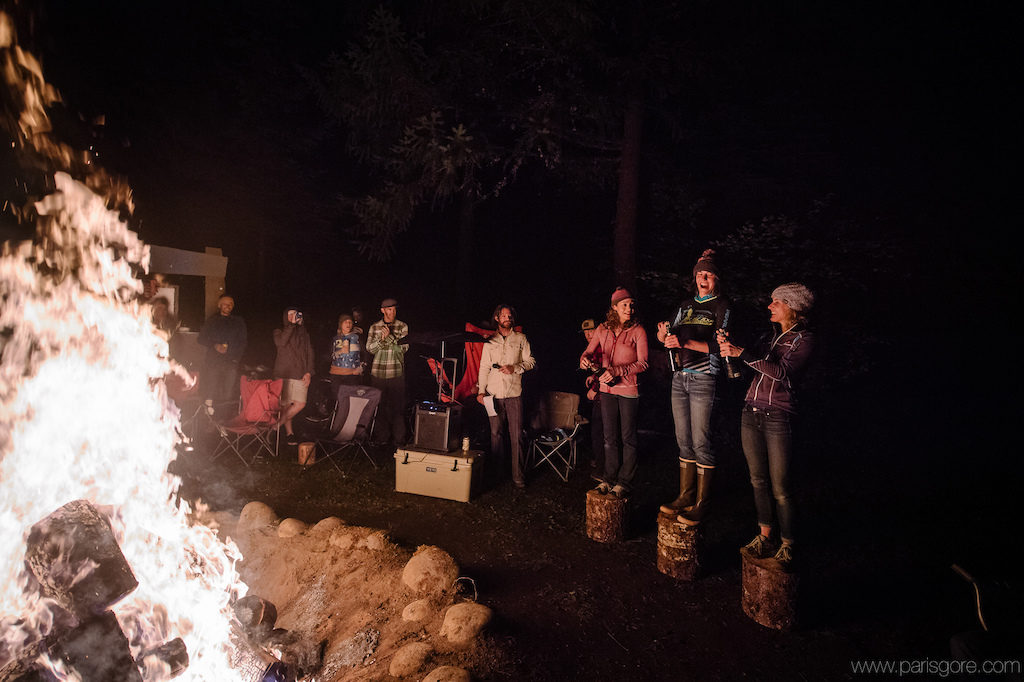 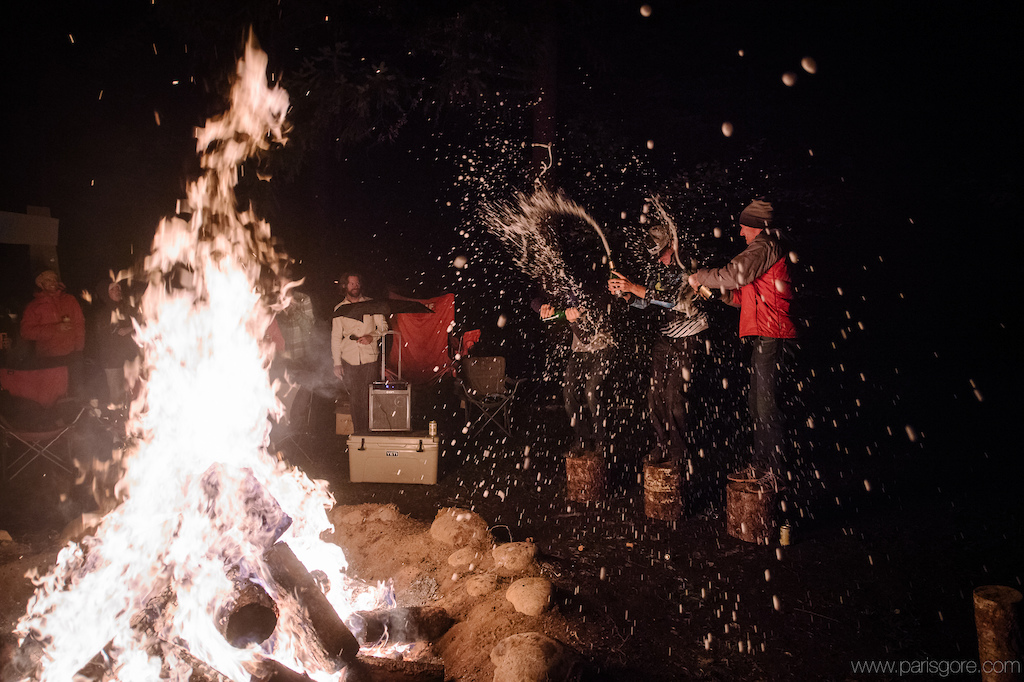 EricHarger (Oct 3, 2016 at 18:19)
Great coverage! Looked like a fabulous event with off the charts riding. Congratulations to rider and organizers. Cheers.

gerrycreighton (Oct 4, 2016 at 10:22)
What an amazing trip! My hands were frozen coming into that corner, I guess it got away from me!

Marcusthefarkus (Oct 3, 2016 at 17:52)
some of the bikes rolled straight but some around corners but looks like all tents gave shelter and the fire gave heat to both the people and cooking

stinkball (Oct 3, 2016 at 19:55)
Huge props to the Golden contingent Shane, Rich and Julie. What a solid performance by all, crushed it.

DeLaRosaMTB (Oct 4, 2016 at 11:29)
Where were these last two stages located? Anybody know the trails? Been to the Oakridge area several times, so just curious.

GRMTBR (Oct 4, 2016 at 13:11)
I recognize one trail from the video-Kings Castle. Super fun fast downhill. Its on the south side of HWY126 (McKenzie Hwy). A few other trails are in the area including an IMBA Epic loop that the local mtb club has recently cleared/fixed up.
bendtrails.org/trail/king-castle-trail
www.mtbproject.com/trail/3387063

gerrycreighton (Oct 4, 2016 at 14:35)
@GRMTBR: For the last day they cut out a long liason and one stage so we started with a climb to the O'Leary trail. We raced down single track then on an access gravel road then back into single track down. We used Castle Rock as the next liason to O'Leary Road and did King Castle as the final stage.
What amazing trails you have out there!
Post a Comment