The race that started it all, the Western Open, has become an institution for BC and Alberta Cup racers. Held in Golden, BC this event has continued the legacy of the legendary Psychosis race by offering the longest (2000 feet) and most technically demanding course on the circuit. With the finish line right in the Kicking Horse Mountain Village, execution of supporting events, including a kids’ race and the Saturday evening long jump competition, this race has been successful in drawing an enthusiastic audience and local press. 2016 will mark the 8th consecutive year SE Racing has produced a BC Cup level DH race at the Kicking Horse Mountain Resort and it looks to be the best yet.

Mountain bikers come to Kicking Horse Bike Park for the variety. The resort offers over 3,700 feet of stupendous terrain starting from the alpine launch, which is dominated by the three mountain ranges that surround the park, down to the wetlands of the Columbia Valley. From there it’s all downhill, where the stoke factor is amplified by multiple berms, jumps, wooden features (Stickrock has to been ridden to be believed), rock slabs (look directly below the gondola to see the longest) and plenty of good ol’ white-knuckle single-track. The only thing missing are the long lift lines, but you probably won’t mind that.

Registration for the 2016 Western Open can be found here: www.CCNBIKES.com

Dunbar MT7 Group Ride~
To kick off the Western Open and remember where it all began, Dunbar Cycles hosts an unorganized | organized group ride from the top of MT7 on Thursday, June 30th and all parents, siblings and racers are welcome to join in! The plan is to meet at the lower lot by the rodeo grounds for 5:00pm sharp. From there we consolidate into as few trucks as needed and make our way to the top. Once on the summit, we will have a group photo taken and break into two groups. The first group led by some of Dunbar's fastest racers will drop into Dead Dog and make their way through one of the gnarliest sections of trail anywhere. The second group, led by Jason Louden and T-Moe, will take Red Wine down avoiding the steepest parts of Dead Dog, but still getting to ride the rest of the original Psychosis course to the bottom where ice cold beers are waiting. 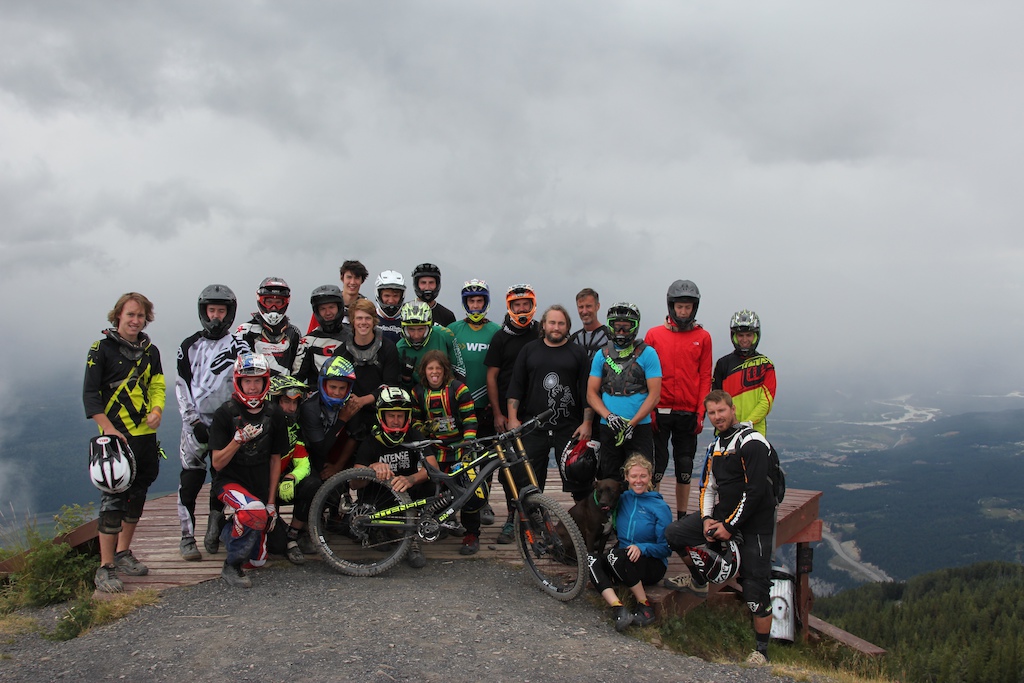 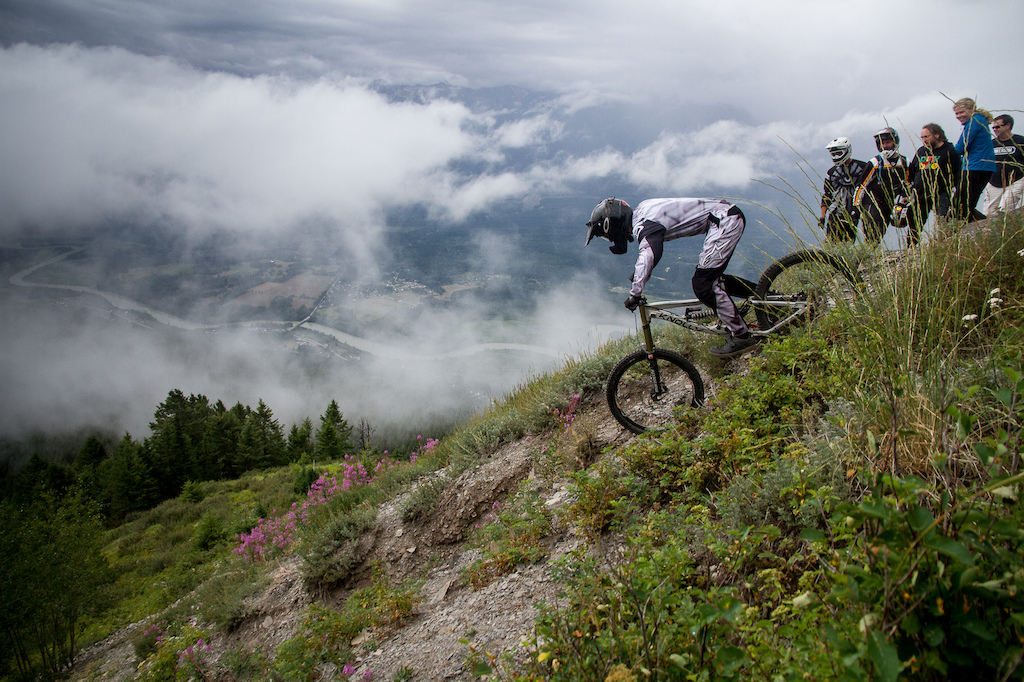 Shimano Kids Race~
First started by Tara Llanes and Elladee Brown at the 2011 Western Open, the Shimano Kids’ Race has fast become a staple of the event introducing our youngest fans to the addiction of racing. The kids race is scheduled for 2:00pm on Saturday and is open to all kids between the ages 2 and 12. Registration is open from noon to 2:00pm on the day of the event at guest services and is FREE. All kids participating will receive a number plate for their bike and an award for racing from Shimano. 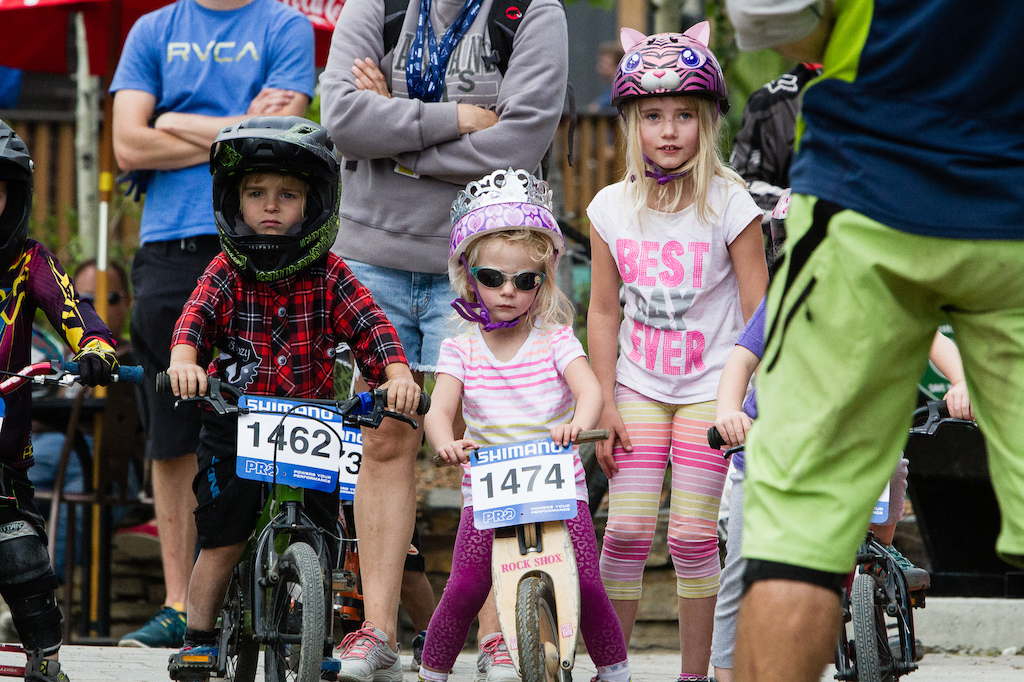 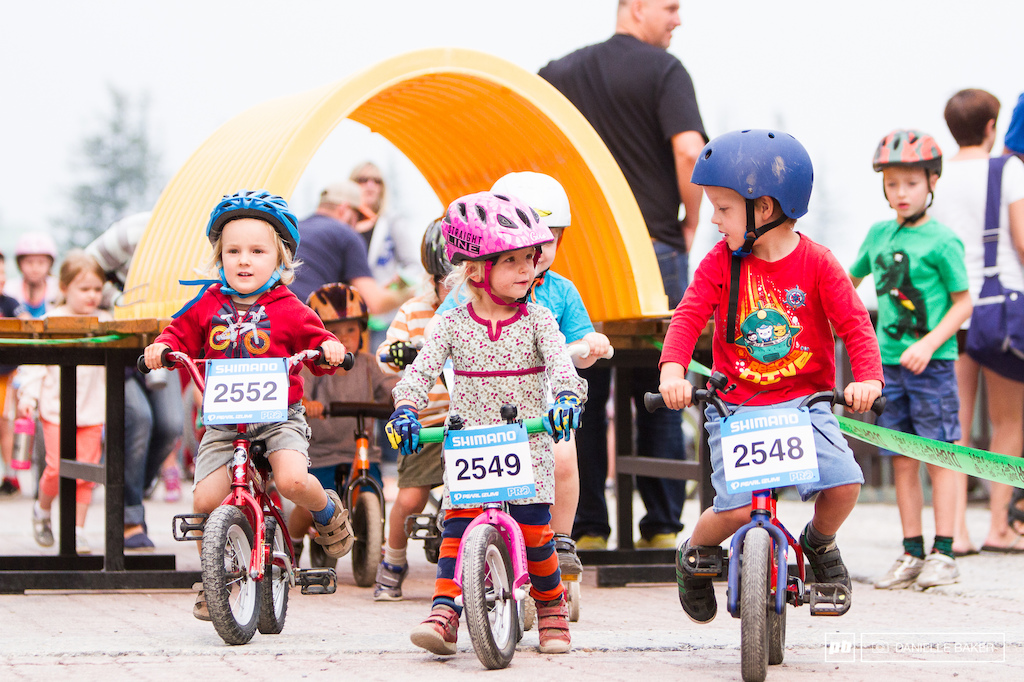 LIV Lounge~
New at all three stops on the Dunbar Summer Series is the LIV Lounge presented by LIV/Giant. The LIV Lounge mandate is simple: "Provide a place and support for women of any age and ability to come together, support each other and learn". The LIV Lounge will be open for women to get bike support, win swag, work with a coach and just hang out. Liv will have a coach on hand to help with any difficult features of the course, help with line selection, organize course walks and many other activities over the weekend. The LIV Lounge is free and we encourage all women to take advantage of the of lounge regardless of bike brand, team affiliation, age and skill level. 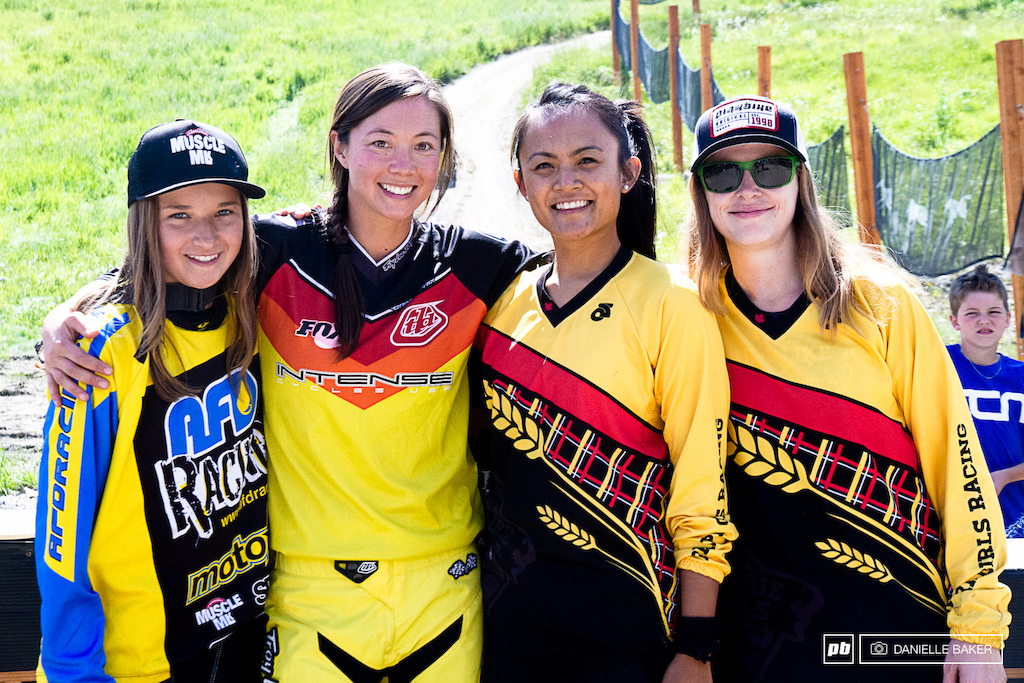 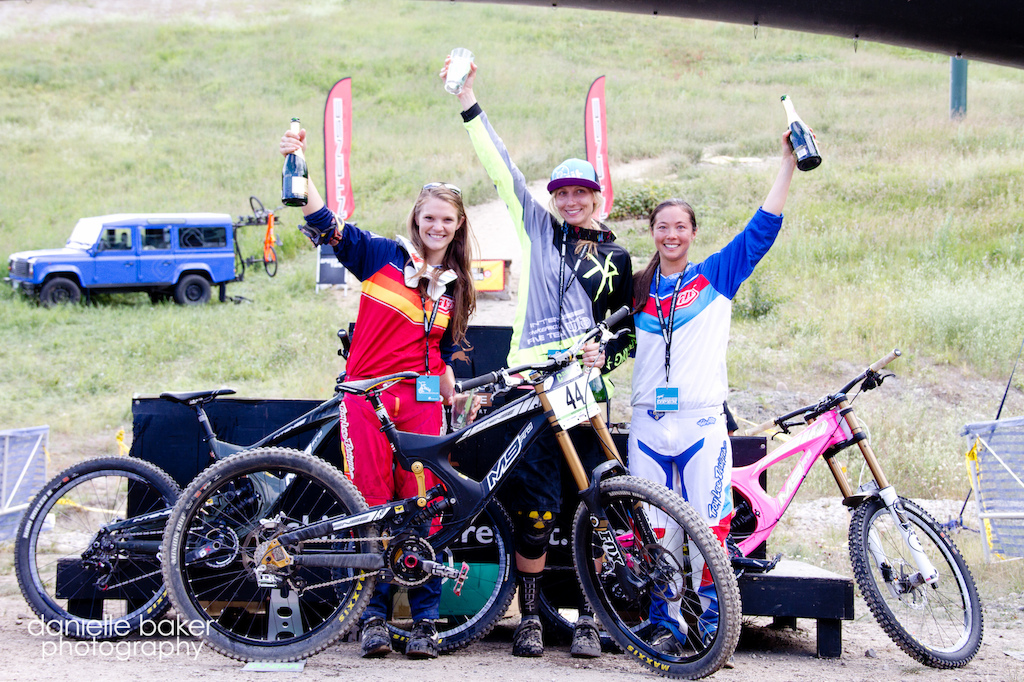 Intense Cycles Long jump & Riders Meeting~
The Intense cycles long jump comp for 2016 will have three categories; Pro, Amateur and Ladies. Dean Tennant is the undefeated huck to flat king, winning each year with jumps well over forty feet. Will 2016 see anyone step up and challenge him? The long jump is scheduled for 5:15pm on Saturday and will be hosted by Brett Tippie and supported with swag from both Intense and Dunbar. The awards for the long jump and seeding runs from earlier will given out at the riders meeting directly following the long jump. The riders meeting hosted by Brett Tippie is packed with both information on race day and swag provided by our full list of sponsors with over $2000 in prizes to be given out. Following the riders meeting, join us for all age showings of both Anthill’s "NotBad" and "Not2Bad" at Peaks pub in the main resort plaza. 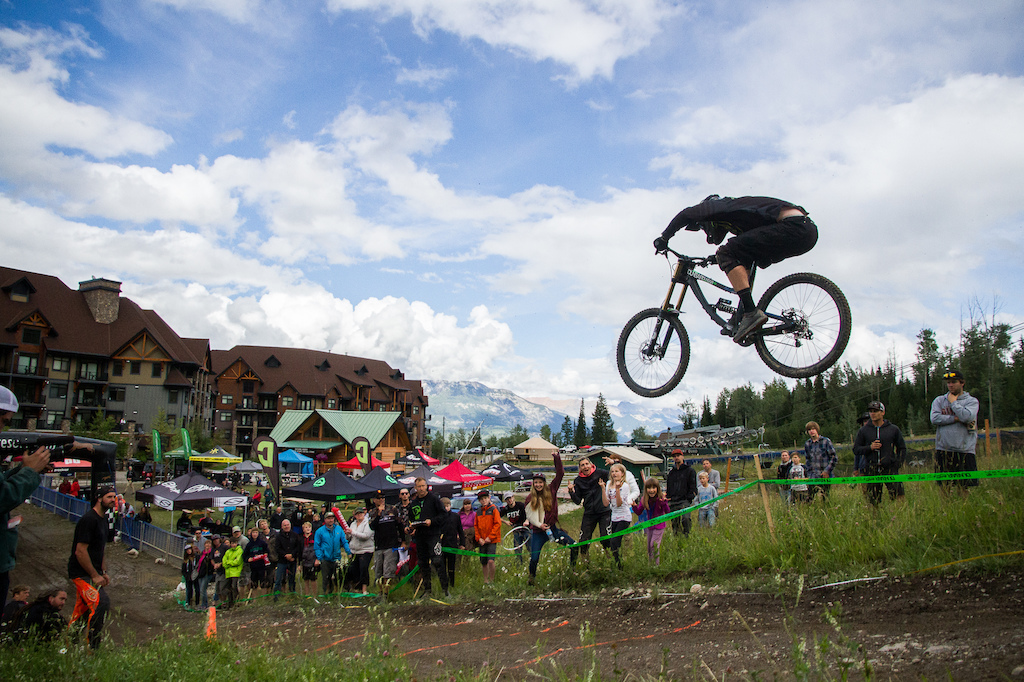 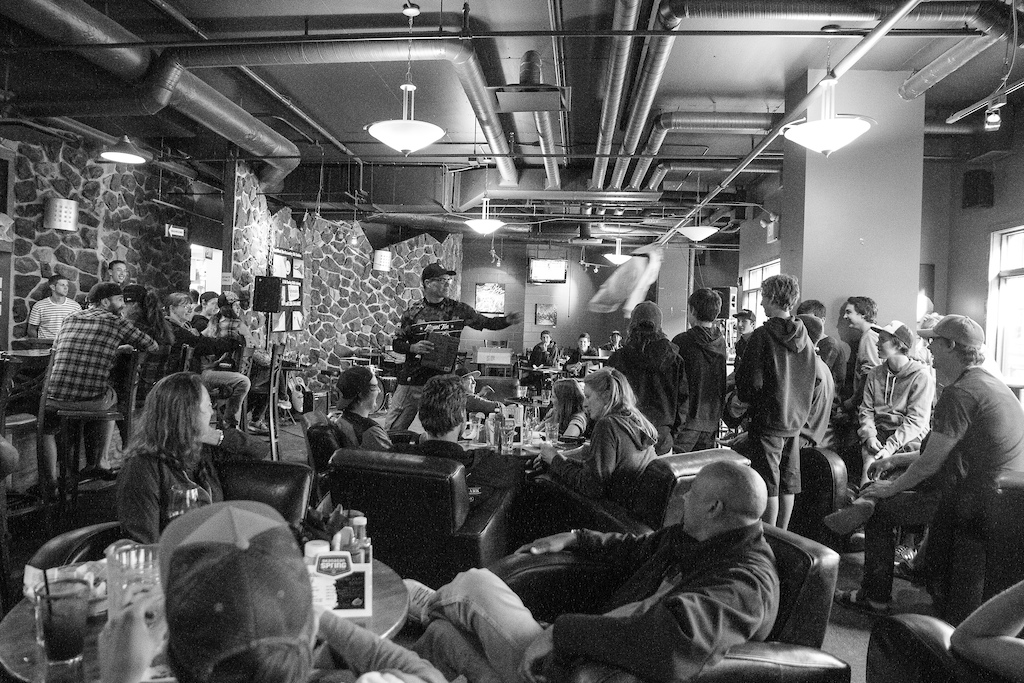 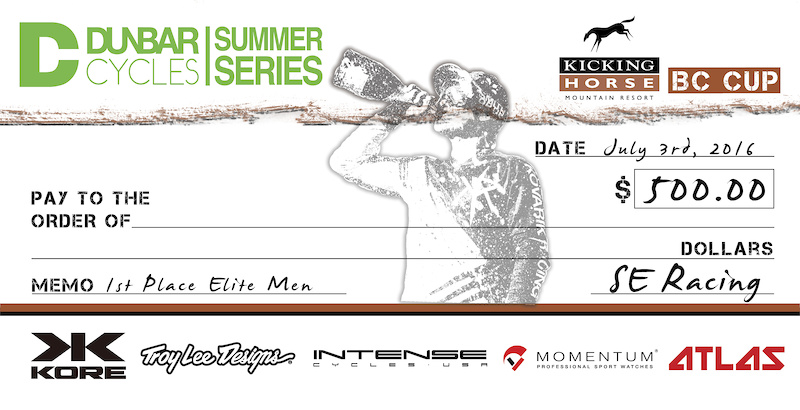 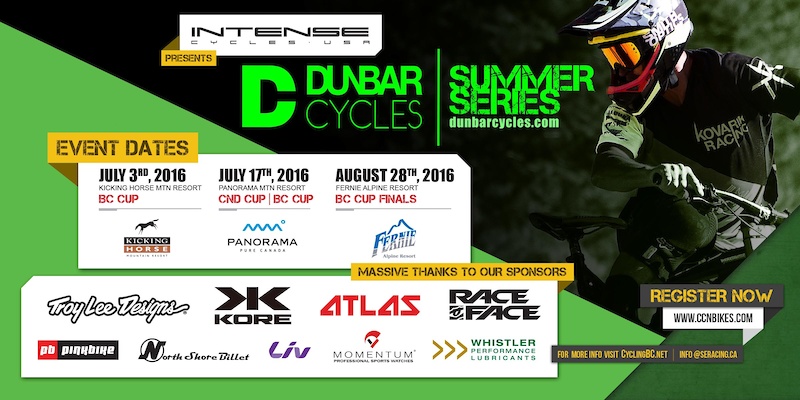 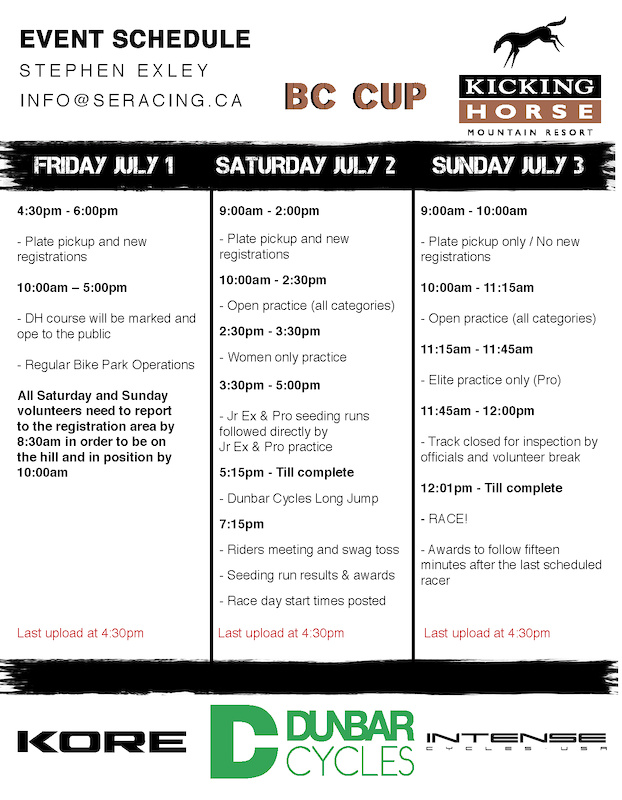 Registration for the complete Dunbar Summer Series can be found here: www.CCNBIKES.com

bretttippie Plus (Jun 21, 2016 at 16:05)
Looking forward to announcing the Western Open BC Cup DH! Great event and awesome mountain!!