If you're a professional athlete, chances are you will break a bone, tear a ligament, or suffer an overuse injury at some point in your career. The sheer volume of time spent on the bike and in the gym means that there's a high risk for injury and rehabbing is just part of the job. Often, that's the side of the Comeback of the Year Award that we touch on - how a physical, often visible, injury halted someone's athletic journey.

Yet the comebacks from all of this year's nominees, Myriam Nicole, Pauline Ferrand-Prevot, Lars Forster, Adrien Dailly, and Jenny Rissveds, required more than just the usual physio visits, MRI scans, and athletic therapy, they required great mental strength as well. No one more so than Jenny Rissveds.

For her openness in sharing her journey with mental illness and her valiant fight to overcome it, our 2019 Comeback of the Year award goes to Jenny Rissveds. 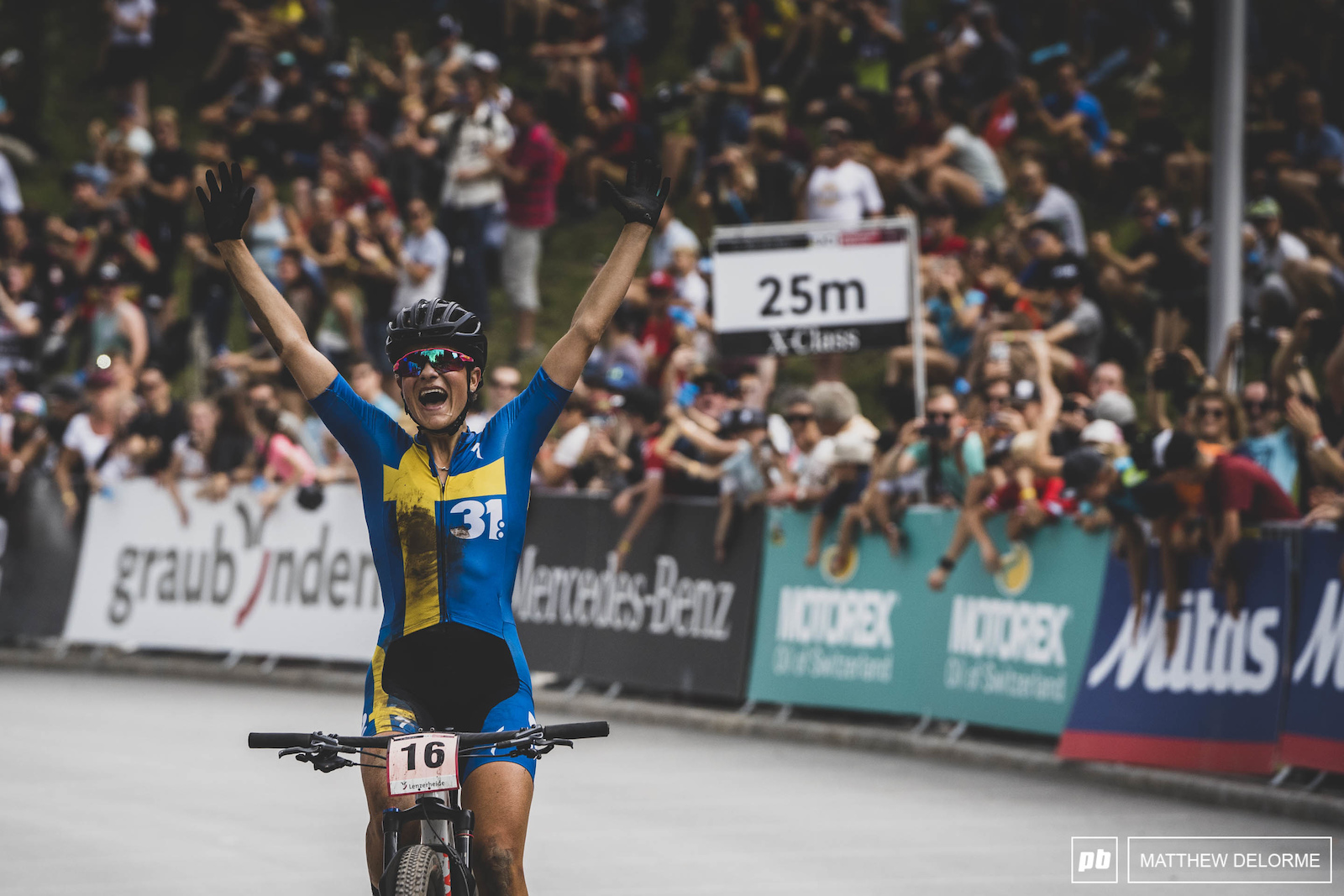 Comeback of the Year

COMEBACK OF THE YEAR

From the highest highs to the lowest lows, and then back to the top.

Jenny Rissveds won her first Elite World Cup in 2016 at the age of 22, shortly after winning the U23 World Championships. Later that year, she became the Olympic Champion. Since then, it has not been smooth sailing for her, however. She suffered from severe depression and an eating disorder in 2017 and had no option but to step away from the sport and her Scott-SRAM team to focus on recovery.

"I don't know what came first, the depression or the eating disorder. If you stop eating, your brain won't work normally," Jenny Rissveds said in an interview with Red Bull earlier this year. "Then all the pressure that came out of winning mountain bike races and winning the Olympics mixed together was just too much." Cycling was far from her mind at the deepest point of her depression as the reigning Olympic champion said that there were days she couldn't even get out of her bed and didn't want to continue living.

Rissveds said she was tired of counting followers and talking about results, but she was able to find joy in riding her bike again when she came back to the sport with a new team, Team 31, and a larger purpose. 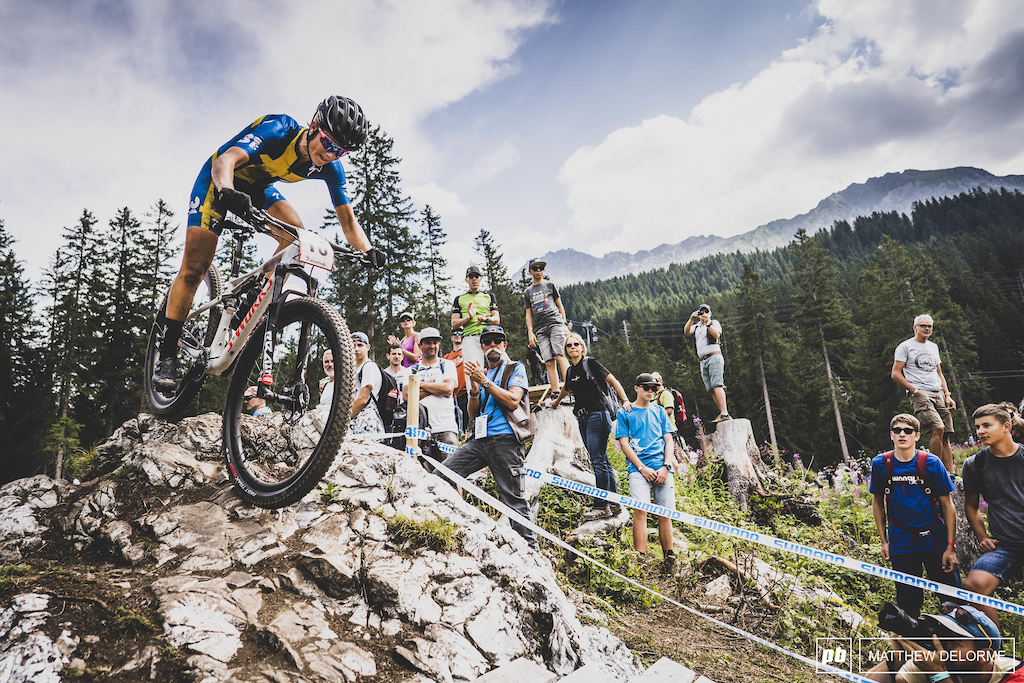 "Our main focus in the team is to inspire and to preserve children's right to play, to stay active and to recover. 31 stands for Article 31 in the Convention of the RIghts of the Child which says that every child has the right to rest and leisure and to engage in play and recreational activities."

Just being able to make it to the start line of a major cross-country race again was a victory in itself for Rissveds. It was anyone's guess as to how she would do in the race.

Start position is incredibly important in cross-country races, and yet even after missing Albstadt due to illness, Jenny was able to make her way to the front of the field from the very back, podiuming in Andorra and Val di Sole, before taking the win in Lenzerheide, Switzerland in August.


From the highest highs of Olympic glory to the lowest lows contemplating suicide, and back to the top. An astonishing roller-coaster of a comeback from the Swedish rider. Not only is Jenny Rissved's story inspiring and emotional, but it takes us one step closer to ending the stigma attached to mental illness. We are thankful Rissveds has been able to recover and grateful that she is willing to share her story.

brucey96 (Dec 23, 2019 at 2:50)
I was honestly expecting to see Myriam Nicole here after coming back from smashing her ankle to winning world champs but this is equally deserving

scott-townes (Dec 23, 2019 at 18:50)
It depends on the person but I would put clinical depression with an eating disorder above a busted ankle in terms of something that takes you out of competing with the best in the world....

fattyheadshok (Dec 23, 2019 at 7:30)
Yeah I’m on board with this one. Using your mental power to work to overcome a physical injury takes a lot of mental gas. Don’t know where you go when it’s your own brain creating the mental state that’s the source of your “injury”. Digging in to that little part of yourself that makes you realize you can come back. So many people including some famous ones have literally starved themselves to death thinking they’re “fat” or whatever. The amount of work and pressure required to be both an Olympic and WC champ could be enough to “crack” anybody. Funny that part of the solution was just for her to ride her bike for the sake of riding. Bikes are awesome. Good on ya Jenny.

thecarrotcruncher (Dec 23, 2019 at 1:07)
Great pick, to go through what she did and bounce back and win. The article says it all. Well deserved Jenny!

scotthanson (Dec 23, 2019 at 5:53)
Pauline Ferrand Prevot had quite a comeback as well. I can't remember specifics but she had a lot of injuries for a couple years after the year she won the XC, CX, and road world championships and now she is world champion of XC again.

sarahmoore Mod Plus (Dec 23, 2019 at 6:23)
A very impressive comeback indeed. She was one of our nominees: www.pinkbike.com/news/pinkbike-awards-comeback-of-the-year-2018.html

Jdavis57 (Dec 24, 2019 at 0:24)
I'd say Rebecca Henderson had a pretty good come back too. Similar issues to Jenny but came back and was even better than previous and from a country that is so far from the European xc scene. Definitely think Jenny deserves it but just though Bec was worth a mention

We’ll have some good ones this year too. Graves. Bulldog. Etc

blackpudding (Dec 24, 2019 at 1:08)
Well deserved, I'm sure Myriam will be able to console herself with her shiny gold medal

jaame (Dec 23, 2019 at 5:46)
@BenPea: now I wish I had paid more attention to those colourful little boxes that everyone was complaining about