Value Product of the Year Nominees

A good value means something a bit different to every person, and many times, it's a matter of personal preference and priority. In our eyes, a value product needs to be not only affordable but also functional. It needs to allow someone to do more for less. It's durable and reliable. It may not be the lightest or most cutting edge, but it has to become an afterthought on the trail without feeling like a frivolous expenditure.

MicroSHIFT's Advent drivetrain, SRAM's Universal Derailleur Hanger, and Marzocchi's Z2 fork all hit the mark in their own unique way. The Advent drivetrain may be only nine speeds but it functions flawlessly, has a good gear range, and is one of the most affordable options for a drivetrain available. SRAM's UDH costs a mere $15 and aims to streamline derailleur hanger options between manufacturers. The Marzocchi Z2 brings the classic Marzocchi feel of a smooth semi-open-bath damper along with reliability and affordability for $500. There are a number of other value products out there and manufacturers seem to finally be realizing that now, more than ever, making mountain biking affordable means making products that have excellent performance without a premium price. 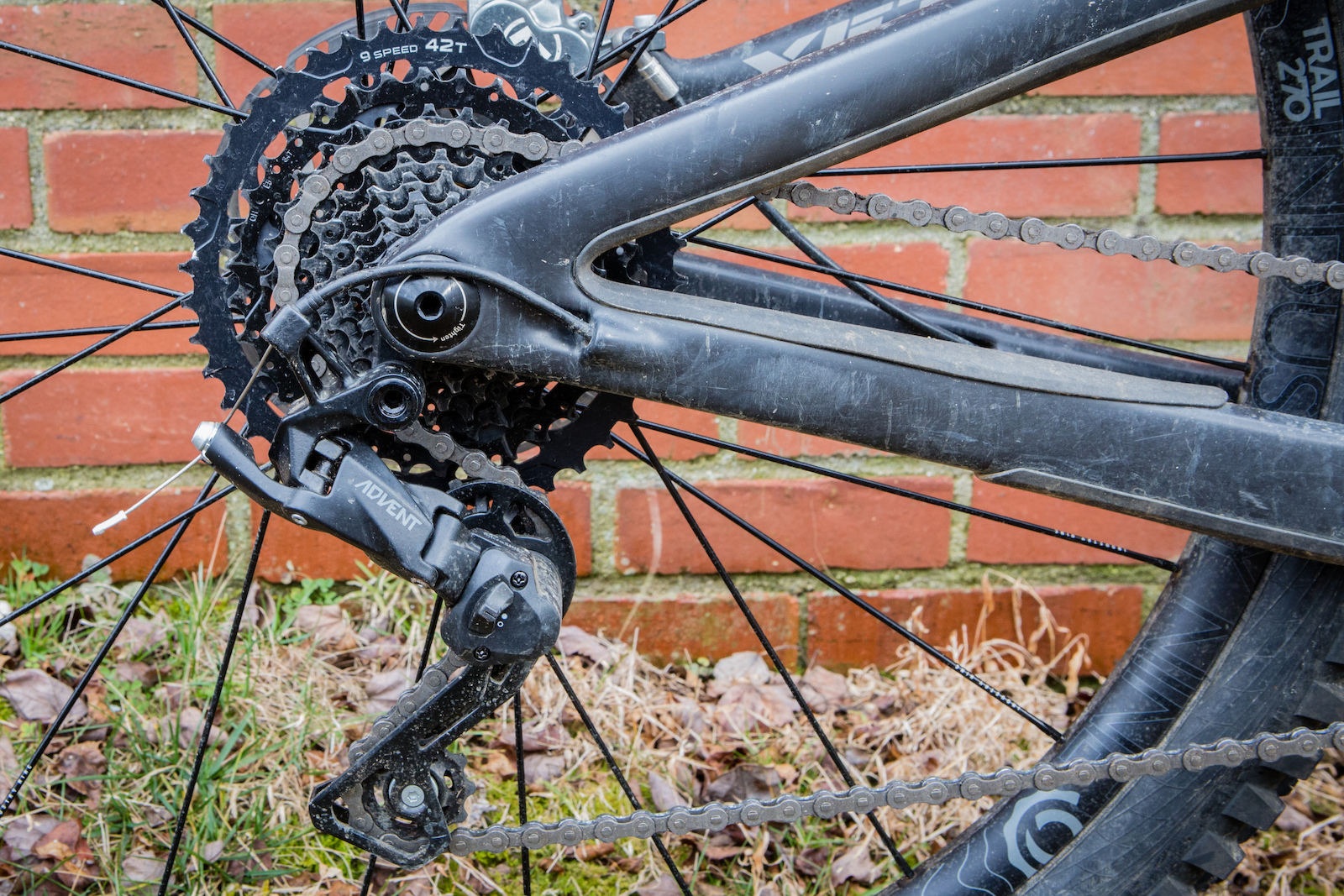 Taiwanese brand MicroSHIFT's 9-speed Advent drivetrain costs $125 USD for the derailleur, shifter, cassette, and chain. Avent was developed to be functional, durable, and inexpensive. According to the team at MicroSHIFT, the goal with Advent was to give consumers an option that worked well enough it was an afterthought while riding while still being pricepoint conscious.

The drivetrain is chain agnostic, meaning it is compatible with all standard 9-speed chains. There's a clutch system on the derailleur that uses a ratchet and pawl system, just like most hubs, as opposed to using a friction sleeve, but it's every bit as functional, and can be disengaged for removing the wheel.

The Advent drivetrain fills a previously open spot and meets a need; it's affordable and functional. It is a few dollar tiers below either of the main competitors' most functional entry-level drivetrains and every bit as, if not more, durable. 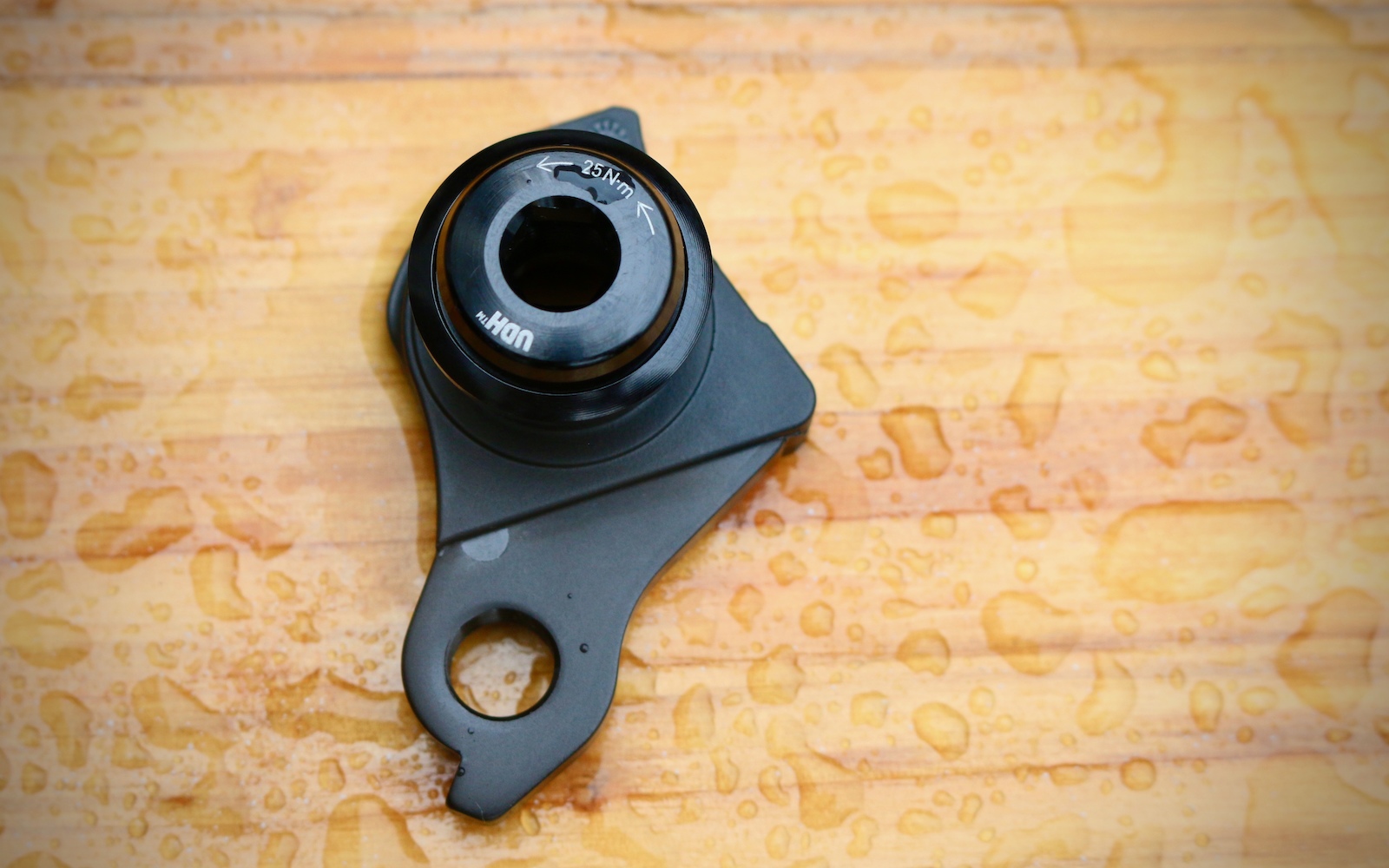 There is a huge catalog of derailleur hangers out there, and along with varying by brand, they can even be different from one model year to the next. That means it can be confusing, frustrating, and at times, expensive, to find a part that fits perfectly. SRAM introduced their Universal Derailleur Hanger (UDH) in an attempt to curb some of that chaos. The UDH costs $15 and is already being used on a number of bikes.

Rather than lock down the technology and patent it or require license fees for brands to produce it, as is common with new products, SRAM have made the UDH open source with no licensing fees. While it will take time for the UDH to have universal adoption, it is a great step in the direction of making at least one part of the bike uniform.

The hanger is designed to rotate backward if the derailleur is smashed into something to protect the derailleur and hanger. Sure, current derailleurs also pivot backward themselves, but in the future that may not be necessary. There's also ramped fin that extends above the hanger, intended to help guide the chain back onto the cassette if it's bounced off one of the smaller cogs towards the frame. The UDH works with all current derailleurs, and SRAM isn't forcing brands to come on board with the new standard.

From the first look: 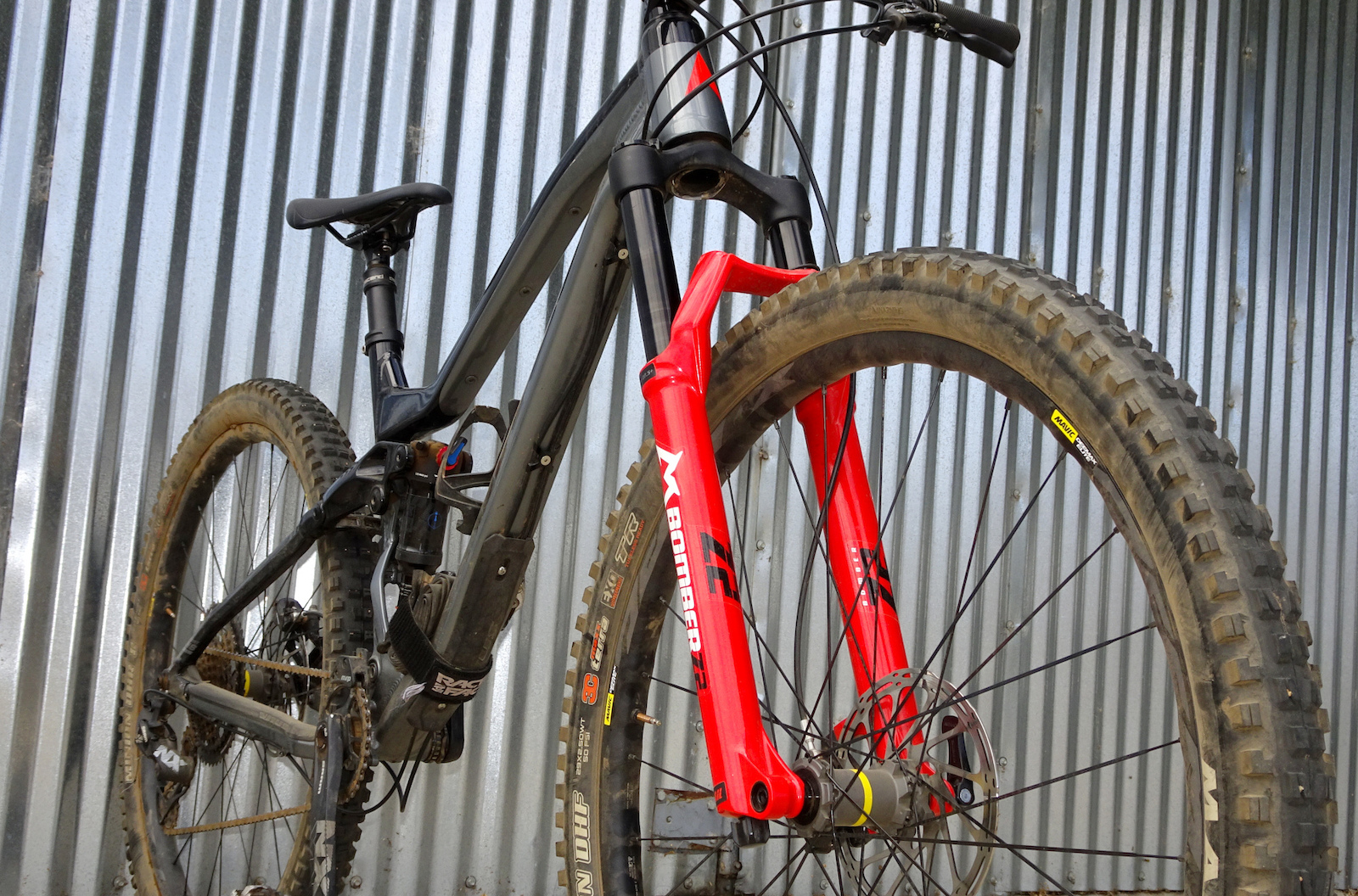 As RC wrote in his review, "The new Bomber Z2 is positioned as an aggressive trail rider's fork. Marzocchi's design team took full advantage of Fox's industry standard for reliability, using the seals, bushings and chassis technology of the Float 34. From there, however, they took a turn from their parent company, weeding out over-complicated damping and adjustment features that could be replaced with simpler, more robust and user-friendly options. The idea was to both modernize and maximize the Z2's performance, and deliver it at a more realistic MSRP than today's super-forks are asking."

The concept paid off, and the result is a fork that's easy to set up, and that performs well above its $499 asking price. Value-priced bikes are often hampered by sub-par suspension, but with the Z2 that's not going to be the case. It's a fork that can go toe-to-toe with options that cost twice as much, with well-controlled damping and enough stiffness to satisfy today's aggressive trail riders.

inked-up-metalhead (Dec 18, 2019 at 0:22)
Personally, the mech hanger is the winner here. Having spent hours and hours searching for mech hangers, only to knacker them the next week is unreal. Combined with the fact it'll be as cheap or cheaper than most hangers off good bikes, it's a win win win situation.

BikesBoatsNJeeps (Dec 18, 2019 at 4:41) (Below Threshold)
The problem is it's only a solution for like 15% of bikes going forward. All of the bikes built before and the other 85% of bikes that are 10mm dropout or department store brand will continue to have a dizzying amount of different hangers. Even as 12mm thru-axle is more widely adapted, you still see most bikes in the sub-$500 range utilizing whatever hanger works best with their dropout.

However, at least it doesn't have microscopic screws that require a 2mm hex to remove. So yeah there's that.

However, my Trek Boone already uses this hanger basically, so let's bow to Lord Sram of Evolving Standards.

pahblo (Dec 18, 2019 at 0:50)
Thing is, for 500 bucks one can probably get a nicer second hand fork and rebuild it.
The hanger gets a WHY ISN'T THIS ON ALL BIKES tag.
The Drivetrain, though, is a legit good value item. It does what it's supposed to do, it's not fooling anyone, it's a $125 9 speed transmission that just works. It's an easy sell from a bike shop perspective and an attractive buy from the costumer's eyes.

oldmanjoe (Dec 18, 2019 at 8:35)
Seems like the perfect DH setup from my perspective. I don't need more than 9 on DH, and cheap replaceable works for DH too.

millsr4 (Dec 18, 2019 at 9:09)
@oldmanjoe: The derailleur isn't stout enough for DH use and it's also a long cage. My buddy went through 3 of them last season on his enduro rig before switching back to Shimano.

The only major con applies to all current fox forks in that from the factory they all have a massive glob of grease in the air spring that can make the fork unrideable. Fortunately it just means removing the air spring and cleaning it out. Wish they'd get their act together on that.

Matt115lamb (Dec 18, 2019 at 11:53)
I got the Z1 bomber and once it’s set for me I’m glad there’s no dials to play with , I can just ride and forget about the high/low speed faffing about . Plus the more I ride in a setting the better it feels . A mate is always stopping and tweaking and another uses a cane creek shock with about 8 dials and ain’t touched it from new lol

pahblo (Dec 18, 2019 at 19:43)
@friendlyfoe: not saying is not good, it is. It's just that after working in the industry for a while and then (thank jebus) leaving it, I know where and how I spend my bike money. (Fox, Shimano, aluminum frames, straight pull spokes, etc.)

cyclebiker0-0 (Dec 18, 2019 at 0:18)
The Advent drivetrain is really impressive for the price! The ratcheting clutch works really well in my experience.

AAAAAHHH (Dec 18, 2019 at 3:42)
I've been looking for an Advent drivetrain for weeks, but here in France, the only available retailer is bike24 and delivery time are between 24 to 25 weeks. Ain't nobody got time for dat !

JamieMcL (Dec 18, 2019 at 4:25)
I don't agree with Microshift's drivetrain being included. Shimano's M6000 Deore line can be had for cheaper (c£90 vs c£95 for MS), arguably will be easier to find parts to repair/replace over long run and provides an extra cog. I don't have time to find the weight for each chain set but would bet Shimano is lighter as well.

I think SRAM's UDH is the most useful product here.

Ttimer (Dec 18, 2019 at 5:15)
Second that. Its also quite hard to actually find any of the Microshift stuff, even online. I'd rather include SLX 12-speed here, or some of the DVO suspension parts that deliver performance at least on par with the big two at much lower prices.

pcmxa (Dec 18, 2019 at 6:43)
@Ttimer: My DVO Jade has been flawless. High and Low speed compression. Low speed rebound. Really allows me to get it to feel the way I want on the trail. It's easily user serviceable. Every part is available on their website. And they will help you with the shim stack if you want to get deeper into tuning it. All for $400.

DidNotSendIt (Dec 18, 2019 at 10:10)
Had a brand-x that came with my first full-sus about 2 years ago and really liked it. Have a Reverb that came with my current bike and i prefer the feel of the brand-x. Given the amount of people that have complained on PB about Reverbs failing, i will probably look to replace it with another brand-x should the suggested inevitible happen to the Reverb.

tpfenning (Dec 18, 2019 at 7:27)
Just installed the Advent drivetrain on my bike, so far it's been great! I usually have to do a bit of fiddling to get everything lined up and shifting properly but this bolted in and worked right out of the gate.

fullfacemike (Dec 18, 2019 at 10:23)
Advent, all day. The hanger WILL be a value product when/if it's fully implemented. The fork... is $500. It's a great fork for the price but still A) outside the budget of a lot of folks and B) a fork that forks just like other forks but a little better. Advent, on the other hand, is a crazy inexpensive way to get into 1x for riders who haven't yet and that can be game changing. The first time I built a stock bike equipped with Advent I was shocked at how well it worked. It's backwards compatible with every bike ever, currently available, and even higher value when you consider that 1x conversion is something most home mechanics can tackle with tools they already own (unlike a fork install).

I was looking to up the travel on my current bike and it made more sense upgrading to this fork rather then changing the damper on my fox 32 as you can't just make the air sleeve change to get up to 130mm. (Damper is $300 on its own)

From what I've been reading it's going to be a lot stiffer then what I currently have and down the line I can get a frame only option and carry over my fork as it will work between 120 - 150mm travel.

Loris123 (Dec 18, 2019 at 0:24)
Sure, as long as it does not fall apart…
After the first day of riding the bushings felt like on an year old 36performance fork. After another week of riding i sent the fork back for warranty work, because it felt like falling apart. Unfortunately they havent got the spare parts so i still need to wait another month until it returns…

But as long as it works its an amazing fork!

dldewar Plus (Dec 18, 2019 at 6:25)
I would have included a double nomination for the one up post. It’s a great post at an industry leading price.

vtracer (Dec 18, 2019 at 7:03)
After yt USA sold out of derrailer hangers for the jeffsy this summer I'm going to have to go for the universal hangar.

NWBasser (Dec 18, 2019 at 12:09)
The Mattoc Comp that came on my budget hardtail is a fantastically good fork for the price. It really feels top-end.