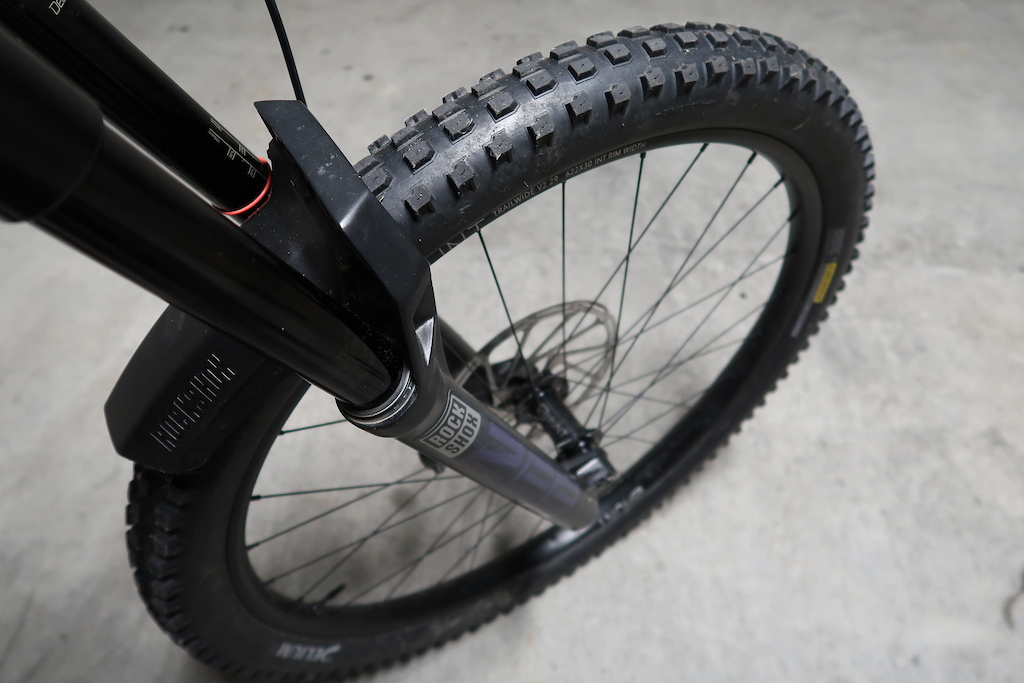 Mountain bikes are expensive, this isn't a secret. Sadly, the joke about your car costing less than your bike is no longer worth saying - it's almost a reliable assumption. That said, lots of prices rise over the years and that's just how the world works. As we showed with all our nominees there are some products that offer real value and I would also say that I don't think entry-level components have ever been so good. I do think that's it's very easy to begrudge high-cost consumable items. If you're going to buy a frame that you intend to keep for a decade then that's one thing - if you're buying a new rear tire twice a season it can get pretty old. That's where Delium comes in.

We've had their Versatile model in for testing and we have to say we're very impressed. Yes, it looks a bit like a Minion and, as the adage goes, I don't care about your opinions. The reason it looks like a Minion is quite frankly because it's a tried and tested design that works. That's not to say it doesn't offer something in its own right, however. The Versatile clears well and almost encroaches on cut-spike territory. It's a great tire to do just about anything on. It comes in two casings, both of which represent great value. The All-Round casing we tested worked well and the tire sells for just $45. This isn't far off half the price of some other brands. The whole range is priced similarly aggressively. Good work Delium. 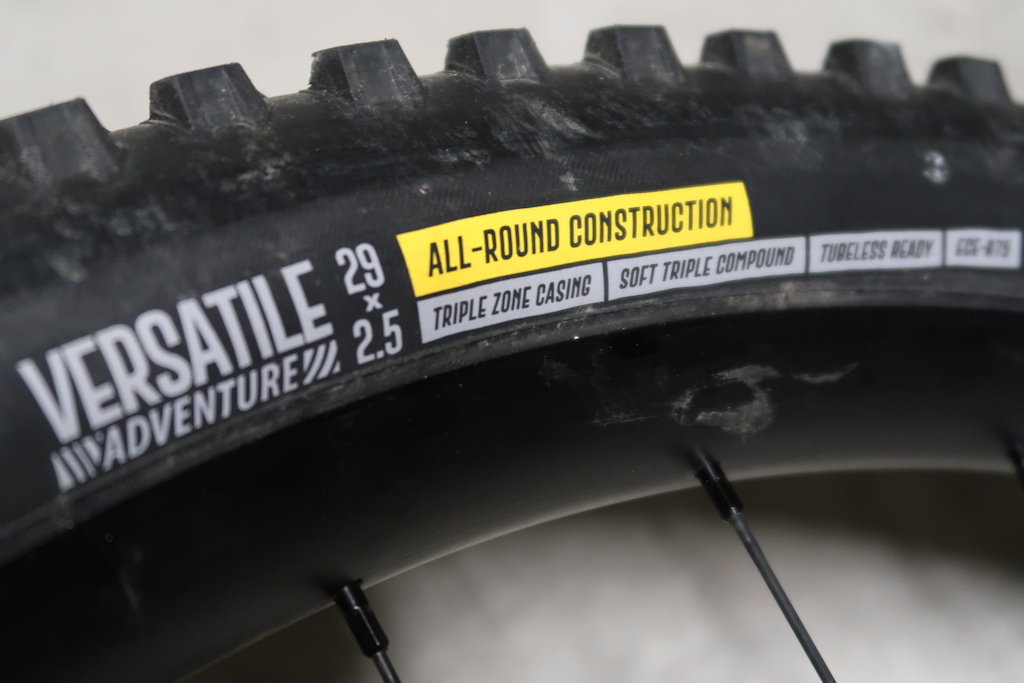 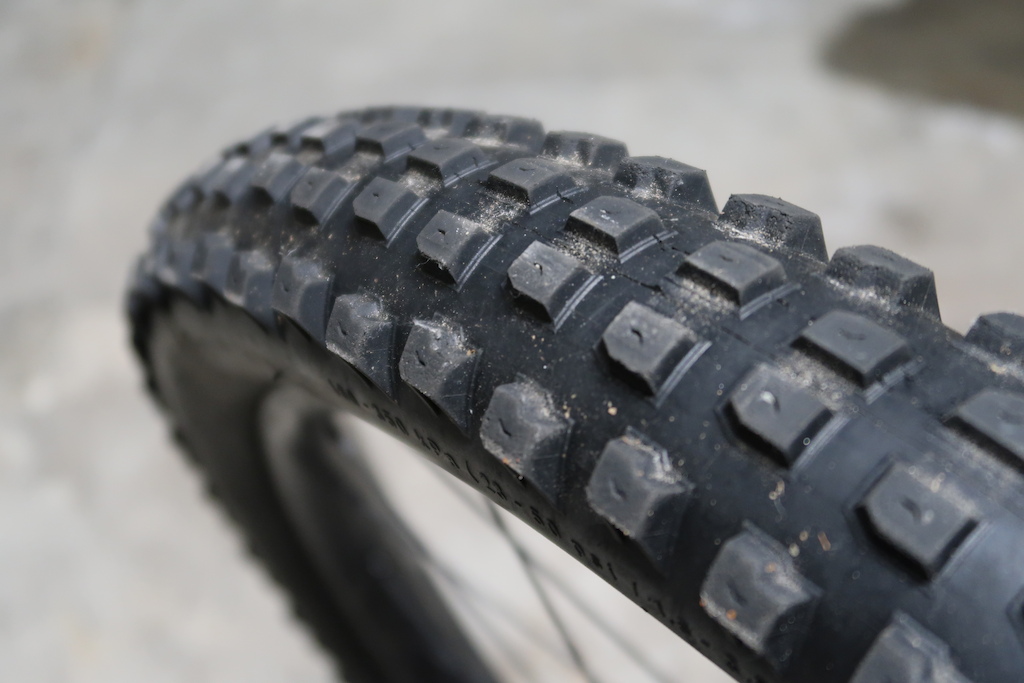 powturn (Dec 29, 2021 at 10:42)
While the Mike Bear thing was funny for about a minute, I stopped watching the Baller / Budget series after that episode because I've already suffered and broken enough cheap garbage parts to know they're not worth buying. I would have watched the entire thing if editors had put in the work to make all the budget choices something *really worth buying* like these Delirium tires. Re-building that used Giant into a "Budget Dream Bike" with only the best bang-for-buck parts would have been a real demonstration of where the ground floor for solid performance lies.

noodlewitnosteeze (Dec 29, 2021 at 21:39)
@powturn: Honestly though. Building what would be a bike for a 2nd year, penny pincher mountain biker would have been a lot better and an actual video series worth watching.

Throw a Yari or Fox Rhythm on the front, buy a set of WTB I29 that are paired with Novatec hubs for actual comparison. Instead they had to go with whatever they could find on page 10 of Alibaba. Really makes the videos feel like they're just saying "don't pay attention to the actual budget options, buy the highest end stuff because the high end brands we used are in our pocket."

inked-up-metalhead (Dec 30, 2021 at 6:56)
@Ajorda: the bontrager wheels were good, and definitely a better option for most, but yeah, why not go for one of the lower end raceface options or truvative (or many many other brands) for the bar and stem? The hussefelt stem has always been an indestructible budget option, instead of going for one that has you questioning it's strength, they're making the bike fit for the bin.

erkkilaurila (Dec 30, 2021 at 7:35)
@powturn: Agree 100%!!! When building up a budget bike one can source reasonable and reliable parts without having to resort to parts from companies I've never heard of and make the bike unpleasant or unsafe to ride.

Gristle (Dec 30, 2021 at 8:57)
@powturn: to be fair, they said they were inspired by the donut hi/low series and they are doing in correct in that regard (no name garbage eBay coilovers kit on low car, for example vs decent suspension for not much more $)

tprojosh (Dec 30, 2021 at 10:25)
@inked-up-metalhead: They are also sponsored by Bontrager/ Trek. Why you think the bike with a failing fork did so good in the xc class?

inked-up-metalhead (Dec 30, 2021 at 11:51)
@tprojosh: right but those bontrager wheels are actually a good value wheelset, as are most bontrager components, the biggest issue is the bontrager name, it's just treks inhouse component brand, right? I wouldn't normally go out of my way to buy them, the only things I'd consider are the wheels (not that I wouldn't just buy a j bend dt swiss wheelset...)

liamdubs (Dec 29, 2021 at 8:11)
Michelin’s are also a great deal, always very surprised to see so few other people running them.

tankthegladiator (Dec 29, 2021 at 9:49)
@gnarnaimo: agreed. That massive blue and yellow stripe is a bit much. The other budget tire which some locals like is Goodyear - but then you're met with big cartoony lettering.

mtb-scotland (Dec 29, 2021 at 10:09)
@tankthegladiator: mine don't have yellow and blue on them. A lot less intrusive and a maxxis with its white and orange list of stuff.

Almazing (Dec 29, 2021 at 11:38)
I run Michelins and have been running them for nearly a year now. My bike park wheelset has DH34s and my trail wheels have the AM2 Wild up front and Force out back. They're 20-30$ cheaper than Maxxis and perform just as well, if not better.

bctrailblazer68 (Dec 29, 2021 at 13:18)
Yup, I can get the Michelin Wild Enduro Gum-X front and rears for the same price as these basic no namers. Why are these even here?

liamdubs (Dec 29, 2021 at 14:56)
@gnarnaimo: fair point about the ones with the aggressive decals that they may not be to everyone taste. The wild enduro ones I have though (3x33 casing, gumx3d) are pretty basic though - basically just branding and spec information.

It's some of the DH tires and the Racing edition (4 ply) wild enduro tires with that look.

GumptionZA (Dec 29, 2021 at 22:31)
I would love to try some but I don't understand their range and casing/compound naming convention!

woofer2609 (Dec 29, 2021 at 16:31)
I'm curious to try these, but I noticed on their website that they have a triple tread compound that has a hard base layer (70a Durometer?), and then a 50a and 60a top layer (side and centre knobs respectively) vs. Maxxis Maxx Terra with 70a/42/50a or Maxx Grip with 70a/42a/40a. There is a noticeable difference between Maxx Grip and Maxx Terra, the Delium would appear to be a "harder" tire, which in my estimation, is a detractor.
I would presume it rides more like a Maxxis Dual Compound (51a/60a), which I don't think are nearly as good as the Maxxis 3C tires.
Anybody ridden the Deliums?

tuskenraider (Dec 30, 2021 at 9:37)
I've got a pair of Steady's in light and all around casing. I'll copy/paste/edit a small update I did recently: Weight on the Light casing of my Steady with packaging, was waaaay high at 1020g, though advertised as 850g for the 29". The All Around I also bought, was at 995g, so right at spec. I've put two rides on the Light version, running it on the back of my Ripley. The tire casing felt beefy mounting it up, as it should, with the weight it came in at. I'm most interested to test the durability of this casing, since it really isn't "light". Definitely felt like EXO+ level. First ride on midwest dry pack about 3 weeks ago. The tire's weight could be felt over the 800g'ish Bonty XR4 I last had on back, and similar to the Nobby Nic and Forekaster I have ran previously. The Steady felt a little grippier overall, and locked up less under braking. Rolling resistance seemed good, but the weight difference is likely the culprit it felt more than the XR4. I went out the other day on some damp techy stuff and found it had respectable grip, considering the conditions. It did not spin out as easy over moist rocks and roots. I would hope the tri-compound of the all-around would be even better, so a positive start, but for the weight. More rides obviously needed to see how the casing holds up against cuts, which is how I've destroyed the other tires mentioned here. The problem then, is if I had gotten a true 850g tire, does the weight come out of the casing, and how would that hold up compared to what I have now? In hindsight, I guess I should have fired off an email to Delium to see what they had to say, but just wasn't interested at the time.

covekid (Dec 29, 2021 at 16:39)
Super weird year. Isn’t this just what Versus Tires did? Now a copy cat is value product of the year? If Kazimer or Levy would have tested these they would have been “just OK” at best. Plus you can get lots of great tires out there for $50 (Michelin, e13, Conti , Versus). Why wait for something that isn’t even available to buy for most of the planet? PB fail……

DeliumTires (Dec 29, 2021 at 12:00)
@mtb-scotland: Hey, we are new to the market and currently our focus is on the US but we will be expanding into other markets when possible. Keep an eye on our social media or sign up to our newsletter for any updates on when they are available in the UK. Happy riding

CustardCountry (Dec 29, 2021 at 12:55)
Yeah I would have liked to try some here in the UK as I need new tyres and Donna really want to fork out for the current DHF prices. What’s the best UK budget aggressive tyre that’s up there with Maxxis?

manybrouce (Dec 29, 2021 at 9:49)
Spell check is free, also a value item Henry. Proof reading may be a little more expensive though

gnarlysipes (Dec 29, 2021 at 10:28)
@utrider: the new range of Specialized tires are $60 for the grid trail casing. I’ve been very impressed. And they’re in stock everywhere because they started making them in house or have a dedicated factory from what I’ve heard.

powturn (Dec 29, 2021 at 10:54)
@gnarlysipes: Bingo. New Specialized stuff is good enough that I don't have to value shop all over the interwebs for Maxxis or Schwalbe. Nice to just be able to walk into a local shop and grab a great performing tire without having to haggle, while the Maxxis hanging next to it is tagged at a ludicrous $95.

SickEdit (Dec 30, 2021 at 15:53)
In Germany, typical price for an Evolution Schwalbe tire is 45€, one of the few products that are cheaper than the North American prices on Pinkbike.