ENTRY PERIOD & CONTEST SPONSORS:
Pinkbike Fantasy Enduro League (the “Contest Game”) is sponsored by Pinkbike, located at Unit 9 & 10 - 40437 Tantalus Road, Garibaldi Highlands, V0N1T0 Canada (the “Sponsor”).
Sponsor partners of the contest includes: Maxxis
There are prizes to be awarded per each round of the Enduro World Series between June, 2021 and October, 2021 and Grand Prize to be awarded in October, 2021. Number of and actual prizes for the contest will be determined by the sponsor and sponsor partners of the contest. Chances of winning depend on the total number of participants who have entered to play the Contest Game.
The Contest is open from 07 June 2021 at 10:00 AM Pacific Standard Time (“PST”) to 30 September 2021 5:00 AM Pacific Standard Time (“PST ”), during the Pinkbike Enduro Fantasy League promotion (the “Contest Game Period”)

WHO CAN ENTER:
The Contest Game is open worldwide.
The Contest Game is subject to all federal, provincial, and municipal laws, and is void where prohibited.
Participation constitutes entrant’s full and unconditional agreement to these Official Rules and Sponsor’s decisions, which are final and binding in all matters related to the Contest Game. Winning a prize is contingent upon fulfilling all requirements set forth herein.
Pinkbike, and Maxxis employees and their family members are able to participate in the league but are not eligible to win any prizing.

HOW TO ENTER AND PARTICIPATION:
Entrants must visit https://www.pinkbike.com/ (the “Site”) during the Contest Game Period.
To participate in the Contest Game the entrant must be logged into Pinkbike via their own Pinkbike account. It is free to sign up for a Pinkbike account: https://www.pinkbike.com/user/signup/
All contest entries agree to abide by the Terms of Use of Pinkbike - http://www.pinkbike.com/about/legal/#terms-of-use
Registration for the Contest Game is free.
The entrant must visit the contest page during the (“Contest Period”) and follow the instructions including How To Play can be found on https://www.pinkbike.com/contest/fantasy/ and Create Team and play the (“Contest Game”).
(“The Contest Game”) is based on the Enduro World Series between June, 2021 and September, 2021, and is made up of 9 Races.
For each race round your Fantasy Team will accrue points based upon your athletes final placing. Points will be awarded awarded as per (“Race Round Scoring” in “Exhibit A”)
Any use of an electronic device to enhance or alter entrants’ odds of winning will count as a fraudulent entry. Entries that are fraudulent are not permitted and will be declared invalid.
All entries become the property of the Sponsor and will not be acknowledged or returned. Receipt of entries for the Contest will not be acknowledged, and proof of submission of an entry will not be deemed proof of receipt.
The Sponsor reserves the right to delete any entries or remove participants that are in violation of the Official Rules.
By participating in the Contest, entrants agree to be bound by these Official Rules.

OTHER MATTERS:
The Contest Game is subject to all applicable federal, provincial and local/municipal laws and is void where prohibited by law. If any provision of these Official Rules is found by any court of competent jurisdiction to be unenforceable, all other provisions will remain in full force and effect.
The Sponsor will not, under any circumstances, be responsible for, or liable to any entrant or any other person for:
any erroneous lost, damaged, late, incomplete, misdirected, deleted, defective, or altered Contest registrations, regardless of the cause, including, but not limited to, failure of the Site;
any failure for any reason whatsoever of the selected entrant to receive a prize notification;
any changes in email addresses after Contest registrations are submitted; and
any computer, online, telephone, or technical malfunctions or errors that may occur, regardless of the cause.
If for any reason the Contest Game is not capable of being conducted as intended by the Sponsor, including due to computer viruses, bugs, tampering, unauthorized intervention, fraud, technical failures, or any other cause that corrupts or interferes with the administration, security, fairness, integrity or proper conduct of the Contest, the Sponsor may, at its sole discretion, disqualify any entrant responsible for such misconduct and cancel, terminate, modify, or suspend the Contest Game.
The Sponsors will ship the prizing directly. The Sponsor will not be responsible for any tax or customs liability that arises in relation to the delivery of the prizing.
Decisions of the Sponsors are final and binding.
By entering the Contest Game, participants consent to the Sponsor’s collection, use, and disclosure of the personal information provided in the Contest Game registration for the administration of the Contest, including posting of the Winner’s name and city of residence on the Sponsor’s website. The Sponsor will use the Winner’s personal information only for identified purposes, and protect the Winner’s personal information in a manner that is. Entrants may write to the Sponsor and request that their information be removed from the Sponsor’s records.

For each round of the 2021 World Series your Fantasy Team will accrue points based upon your athletes final placing. Points will be awarded awarded as follows: 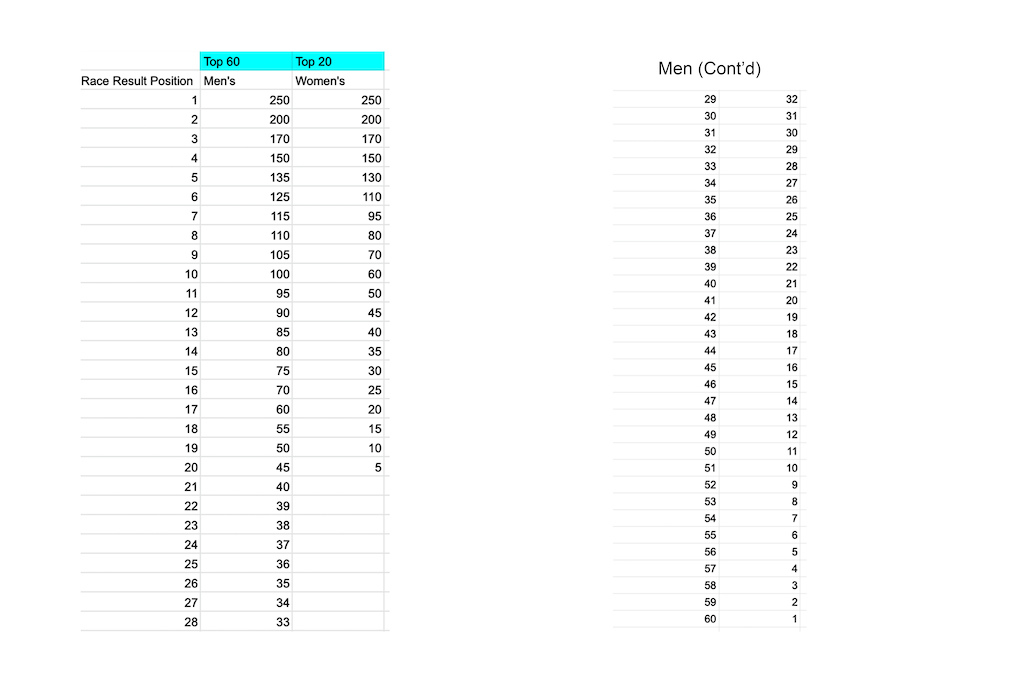