Video: Adventuring from Aspen to Crested Butte & Back in 36-Hours 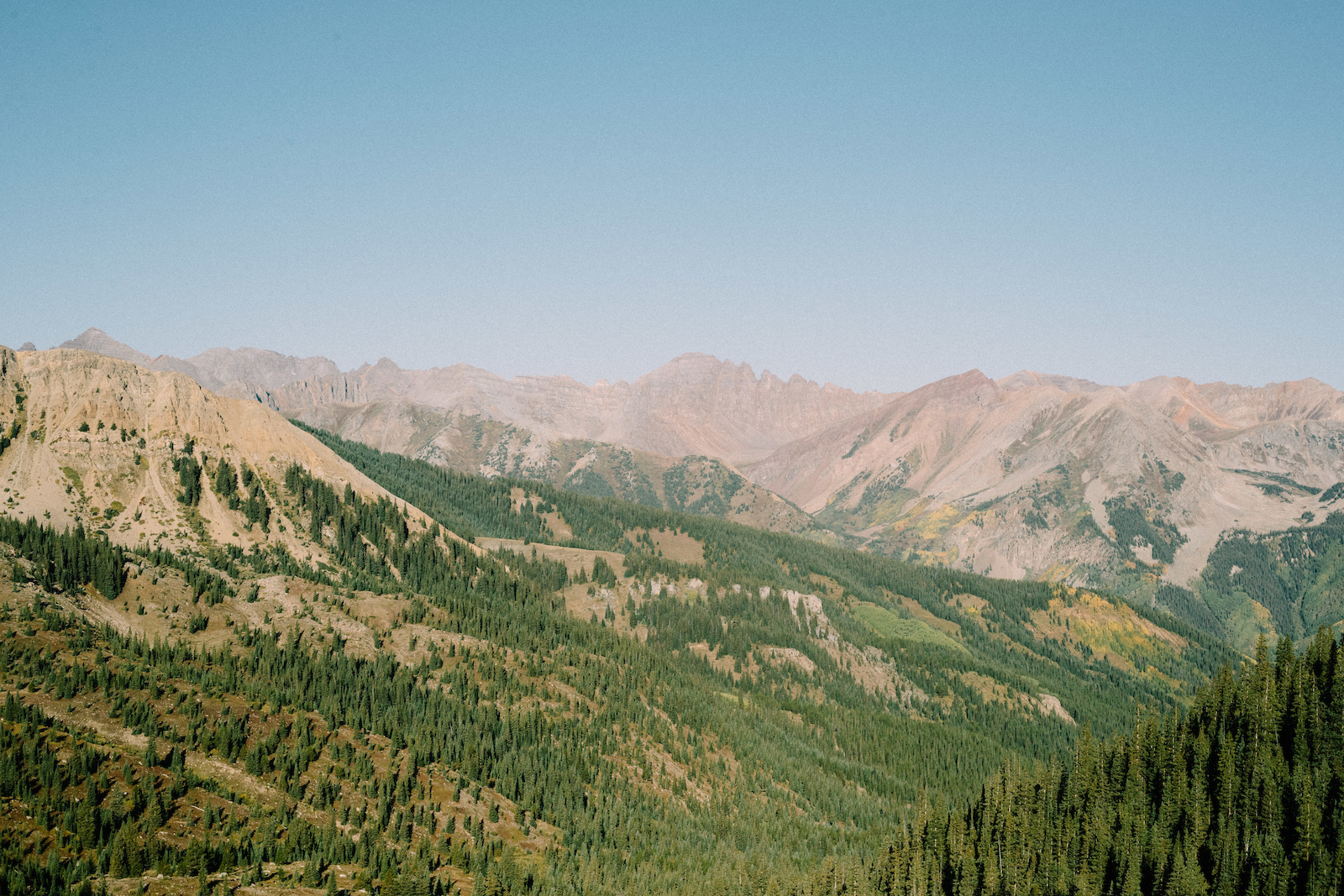 We were lucky enough to win a small grant from Kitsbow for a "36 hour" long adventure. Owing to the beautiful alpine potential and world-class riding, we choose to ride from our hometown of Aspen to Crested Butte, spend the night, and ride back. We dragged along former-friend and filmmaker Roger Carry and two-wheeled fiend slash photographer Elliot Wilkinson-Ray. They absolutely over delivered and we are proud to showcase what we found on the fun version of the Grand Traverse race.

Aspen’s reputation for the past 80 years has been centered around skiing, partying and a little bit of culture. The mountain biking scene has been lurking in the shadows for quite some time and is finally bubbling up to the surface. Aspen has had the pleasure of hosting two Enduro World Series in the past few years which has elevated the riding as well as given the local population an appetite for tough and technical riding. It’s not just what we have here in Aspen that makes it such a great place for a mountain biker, it’s what we have close to here. “The Crested Butte” is a mere 36 miles of Big Mountain Enduro and Enduro World Series tested singletrack away. 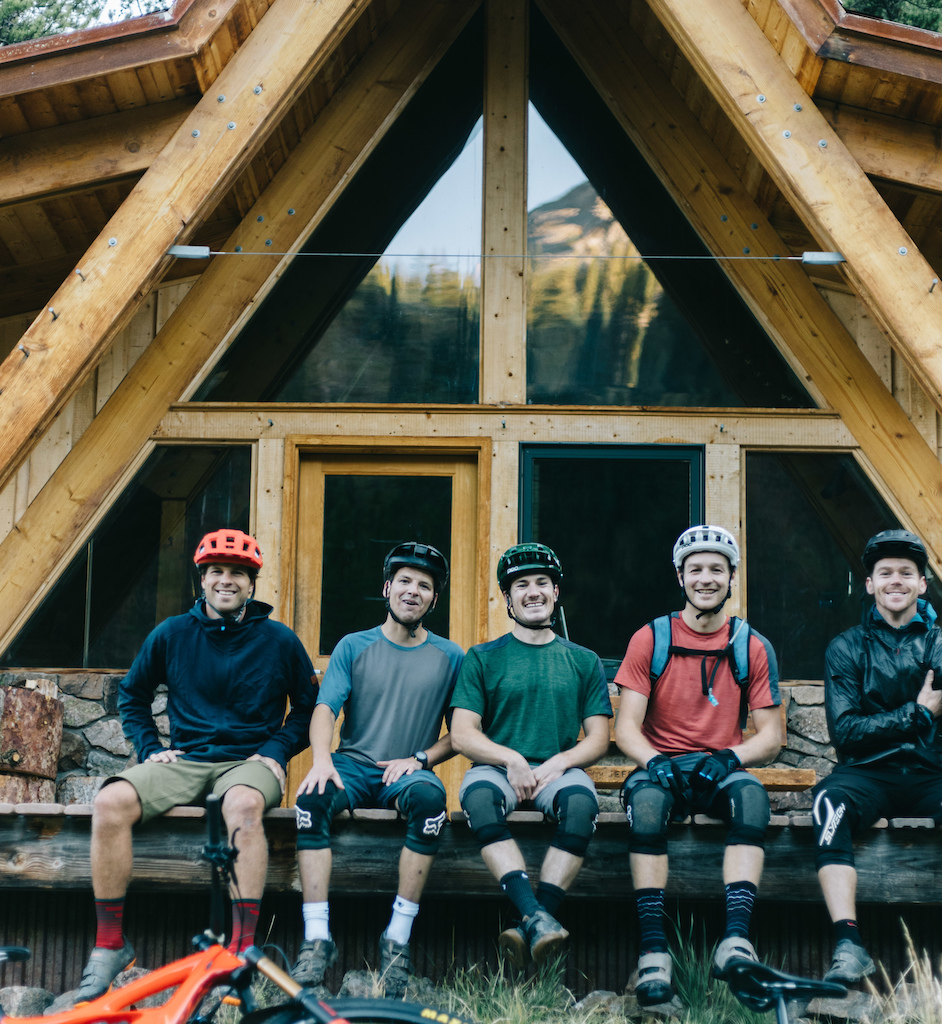 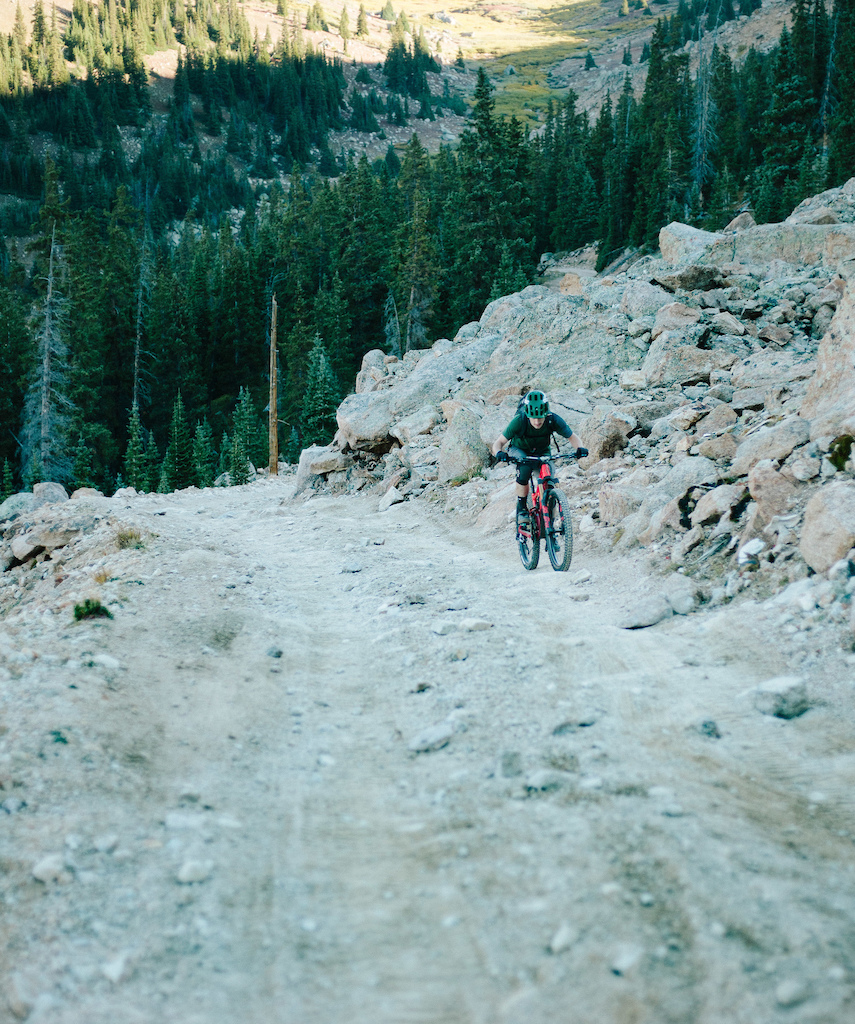 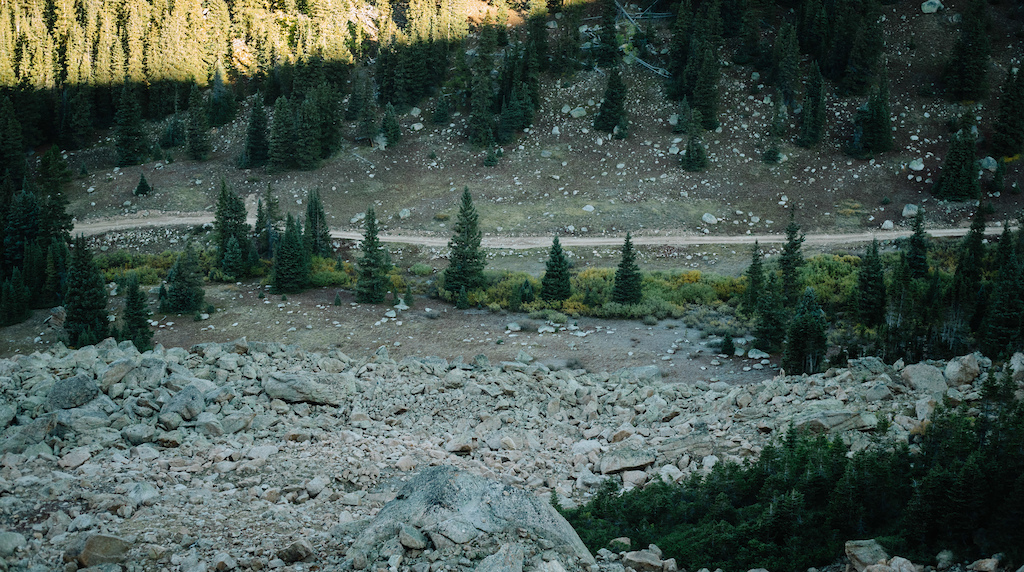 The route starts high and ends high with most of the riding above treeline. The climbing was at times gruesome, commanding upper body strength to push our bikes up steep and loose scree fields, but never daunting enough to create any doubt as we knew what lay on the other side of our climbs. Star Pass (Crested Butte Enduro World Series race stage from 2015) on the way there and Aspen Mountain (Aspen Enduro World Series race stage in 2016 & 2017) on the way back. 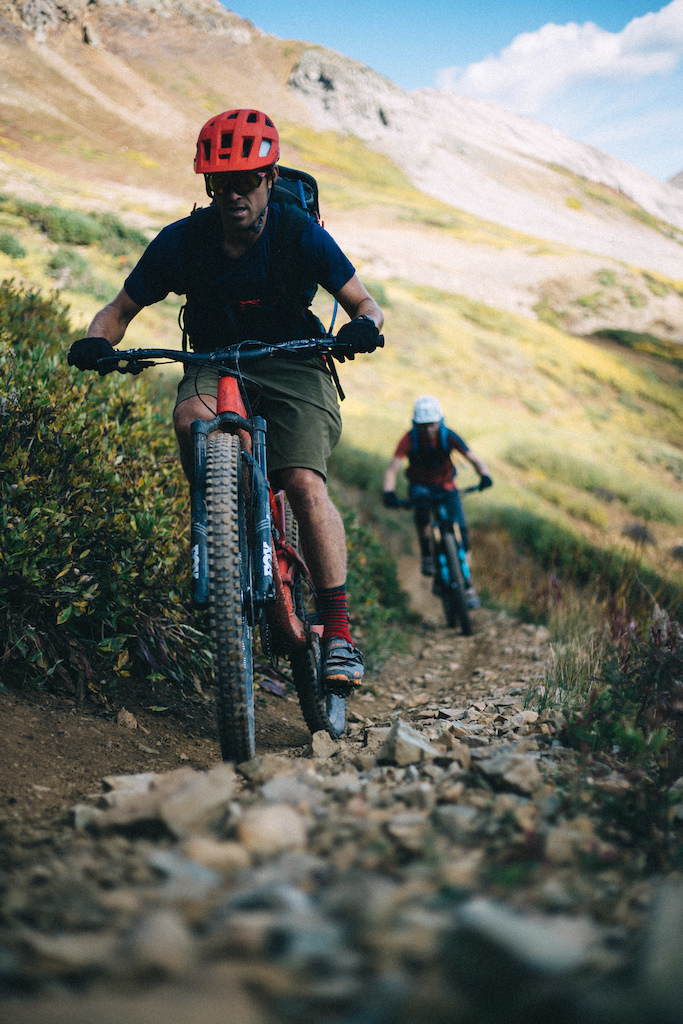 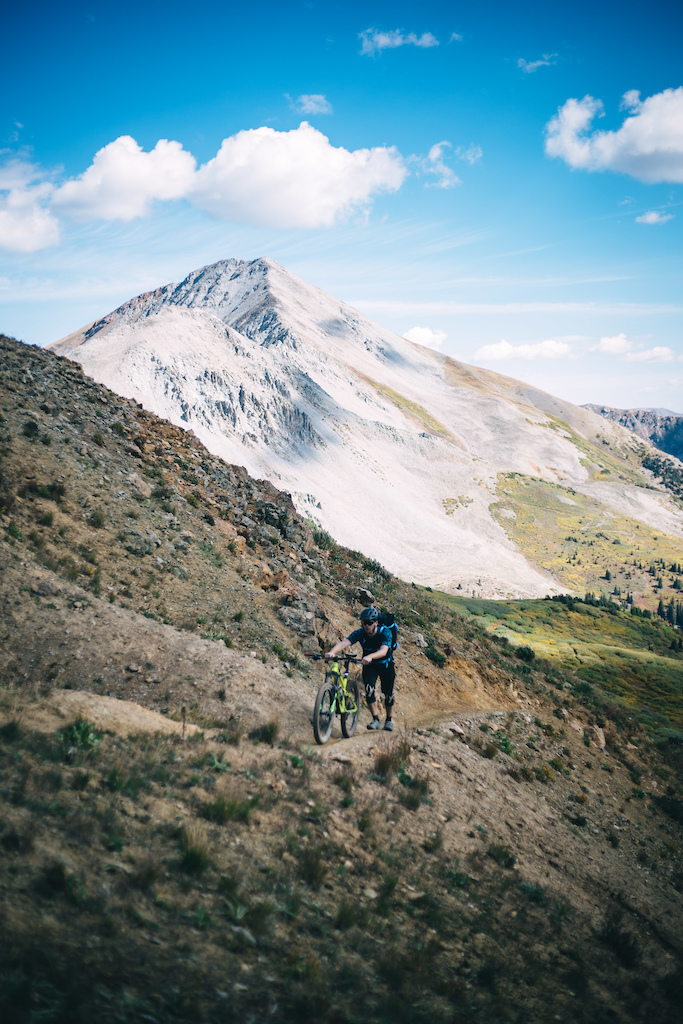 It's all fun and games until the videographers e-bike dies.

The singletrack route is lightly trafficked with most mountain bikers opting for one or the other - a weekend in Aspen or a weekend in Crested Butte. Those that do frequent this route typically turn it into a bikepacking affair… that wasn’t going to work for us. 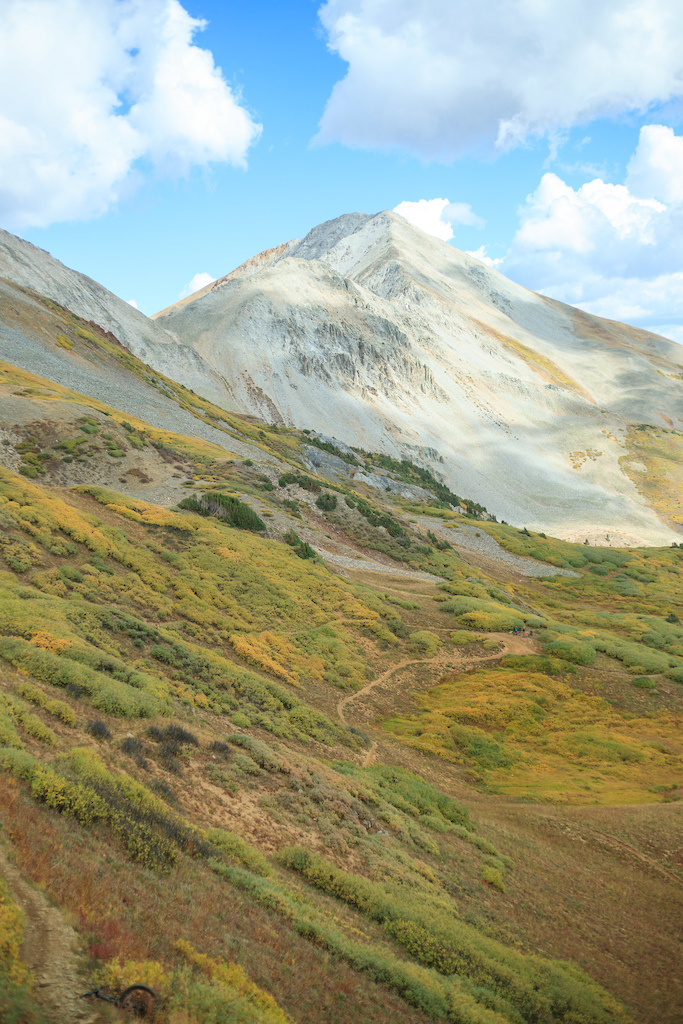 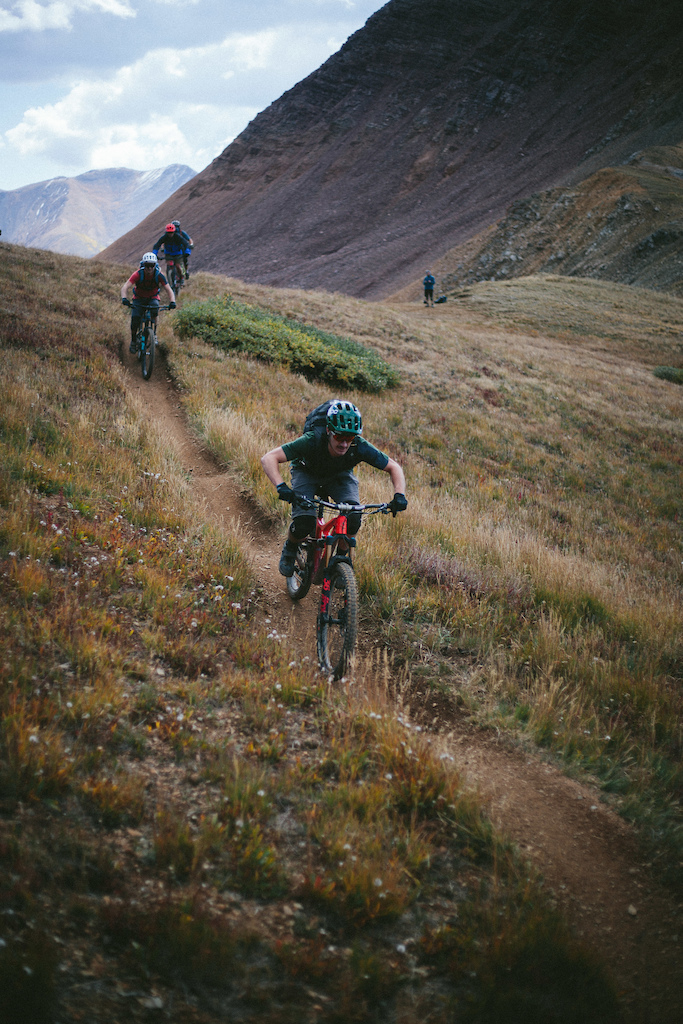 Star pass. Need decent weather for this one. Then all downhill to Crested Butte 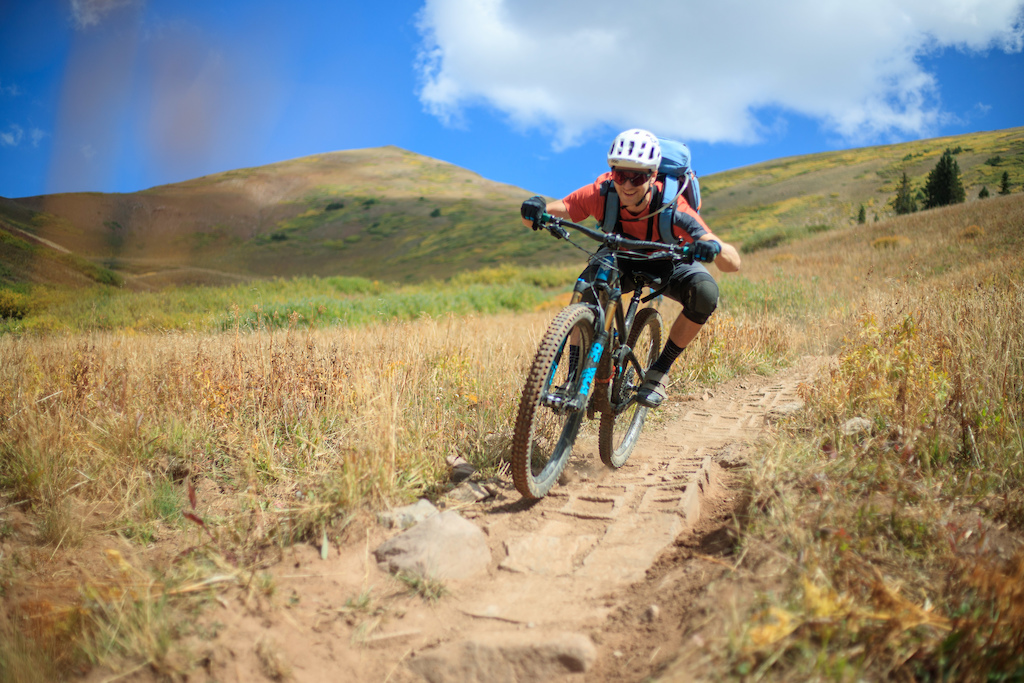 Not not smiling on some moto whoops. 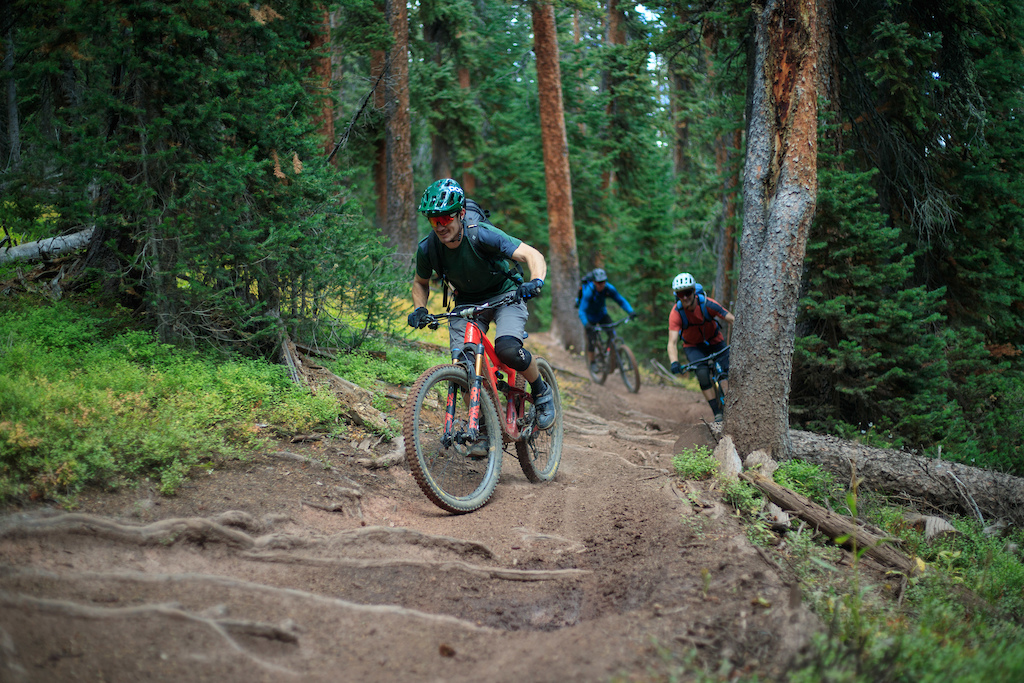 Through the woods on Block & Tackle. 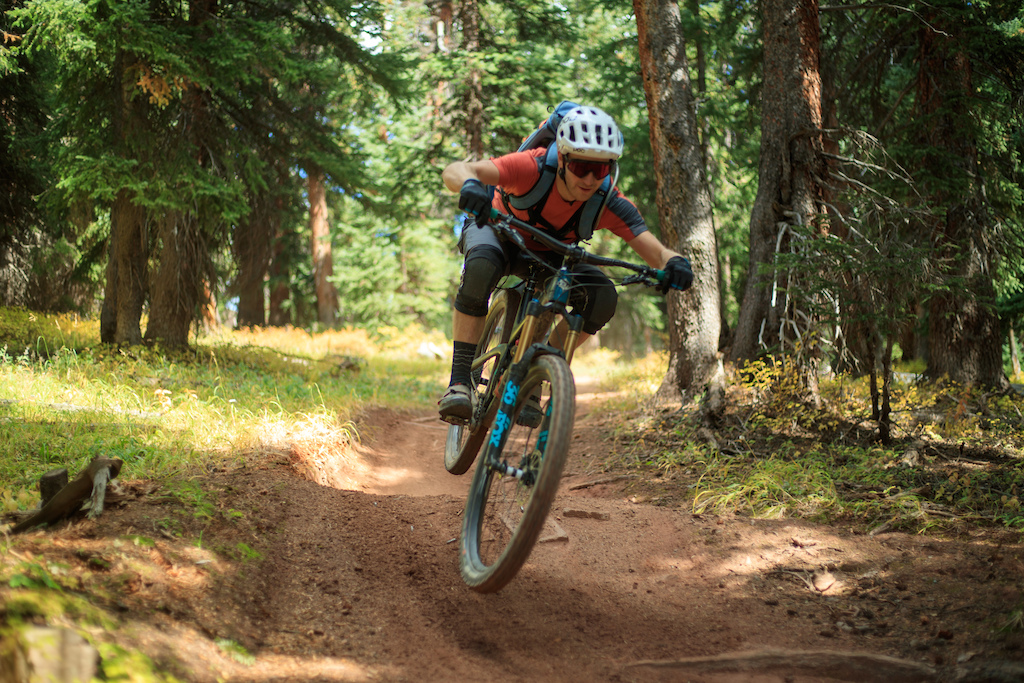 More whoops.
On the way there, mechanical’s were kept at bay. A few broken chains, derailleur hangars and an a costly e-bike battery depletion a mere 10 miles into our 35 mile day. We were wise enough to use “eco-mode” on the way back... The route doesn’t pass through any towns on the way there which required all of us to be on our best behavior as a fatal mechanical could have yielded a very sad 10+ mile hike home. 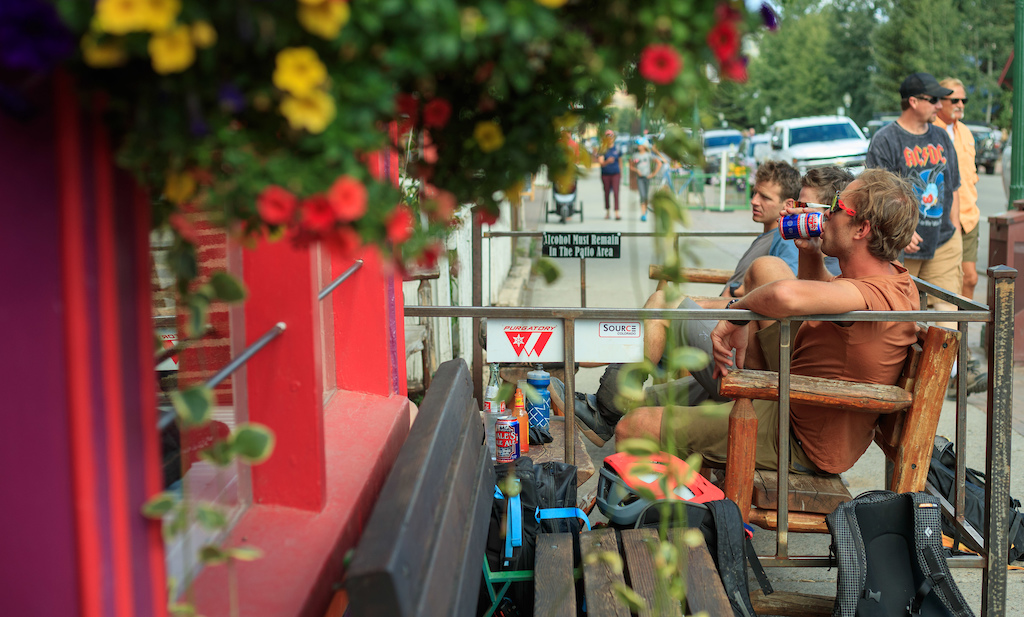 Fairytale ending to day 1 with sustenance at Teocalli Tamale.
We were quite cooked when we got to Crested Butte. Due to our limited space for food and water we ate ourselves into a food coma immediately upon arrival. Following treatment of our caloric deficit, we stumbled to our hotel and cleaned up in preparation for the return voyage. Yes, we could have camped somewhere in Crested Butte and told our friends of our 36 hours in the wilderness but let's be honest - a 10 lb pack with nothing strapped to our bikes, a cheap bill from a relatively nice hotel, and a mattress were all reasons why the trip turned out to be such a success. 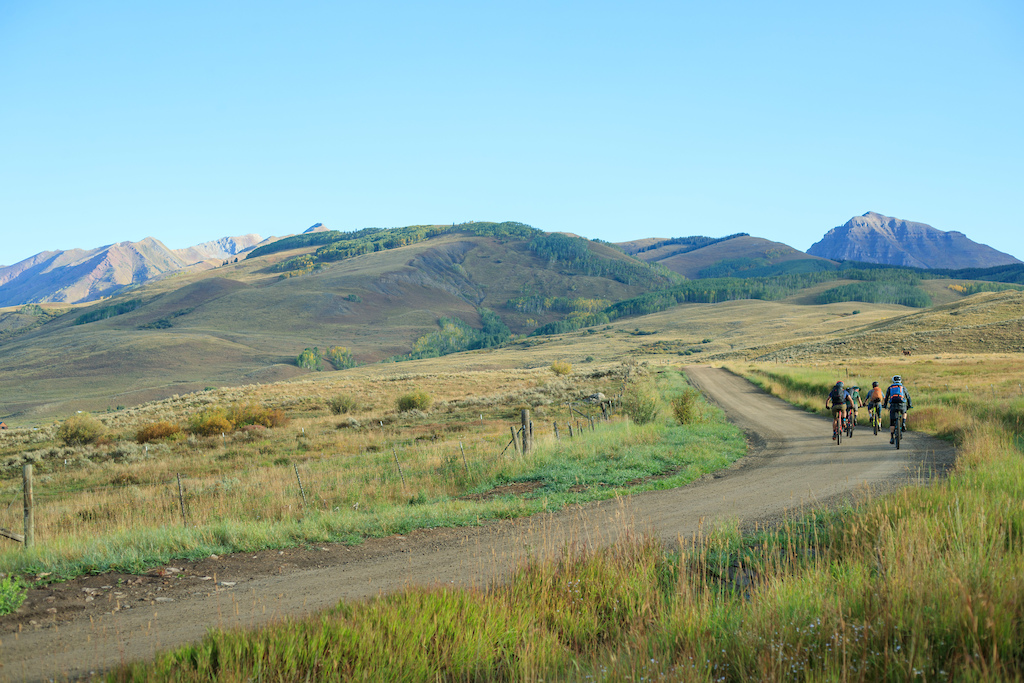 Leaving Crested Butte on a Sunday. Nothing scarier. 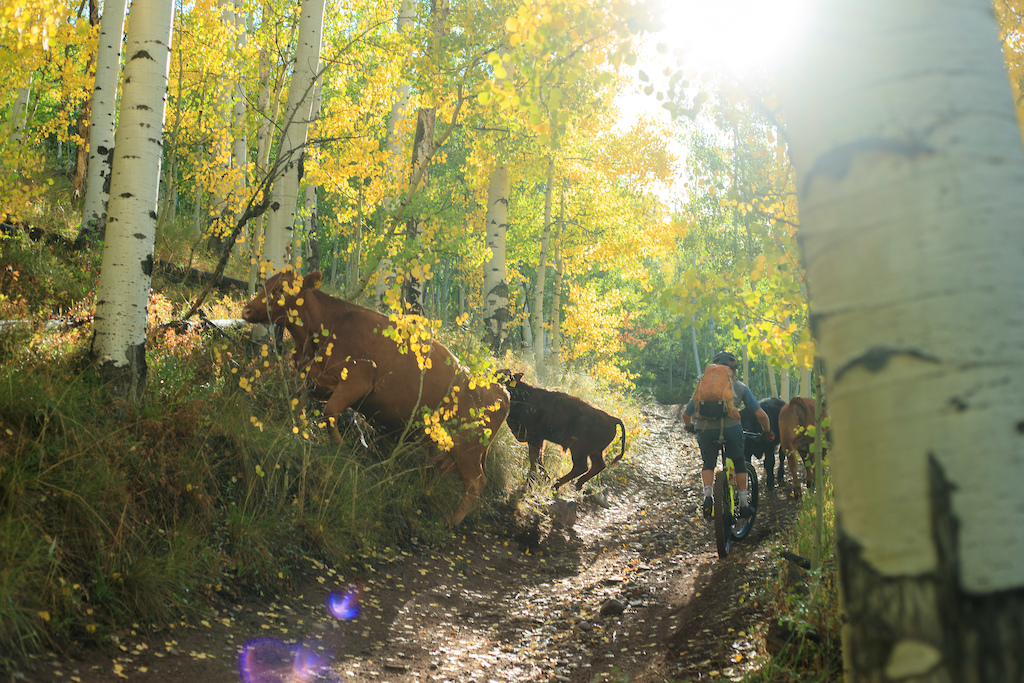 Friend and resident pack mule makes himself highly useful by clearing the climb and carrying extra camera equipment/food/water/tools
The return voyage was the exact same perfect experience we had on the way there with the exception of impressively tired legs and a few flat tires. 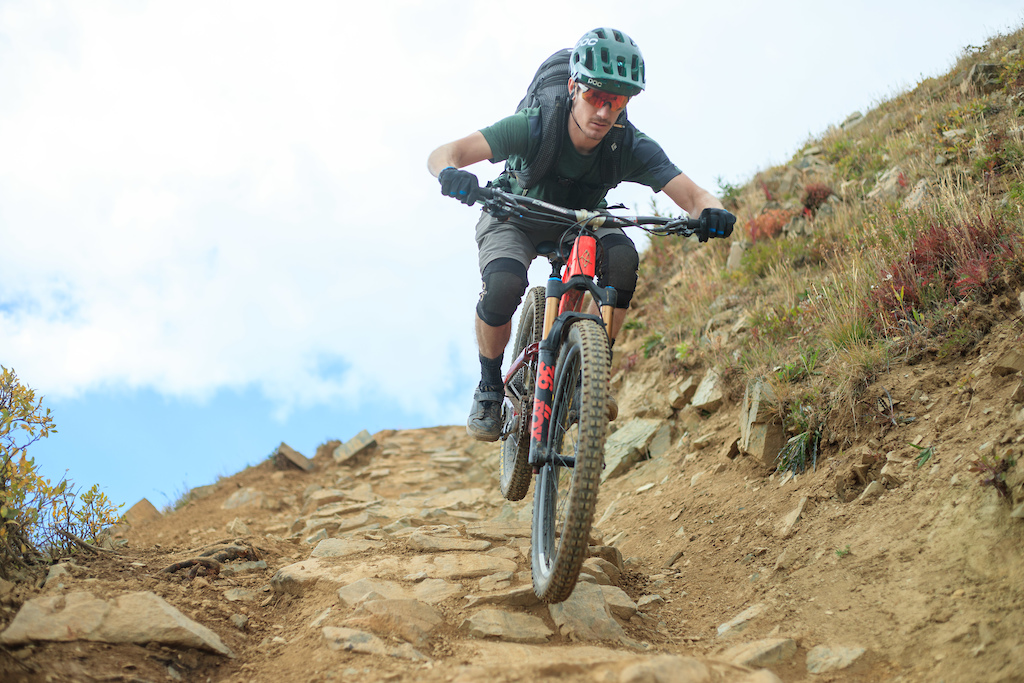 Dropping in off the top of Star Pass. The other way. 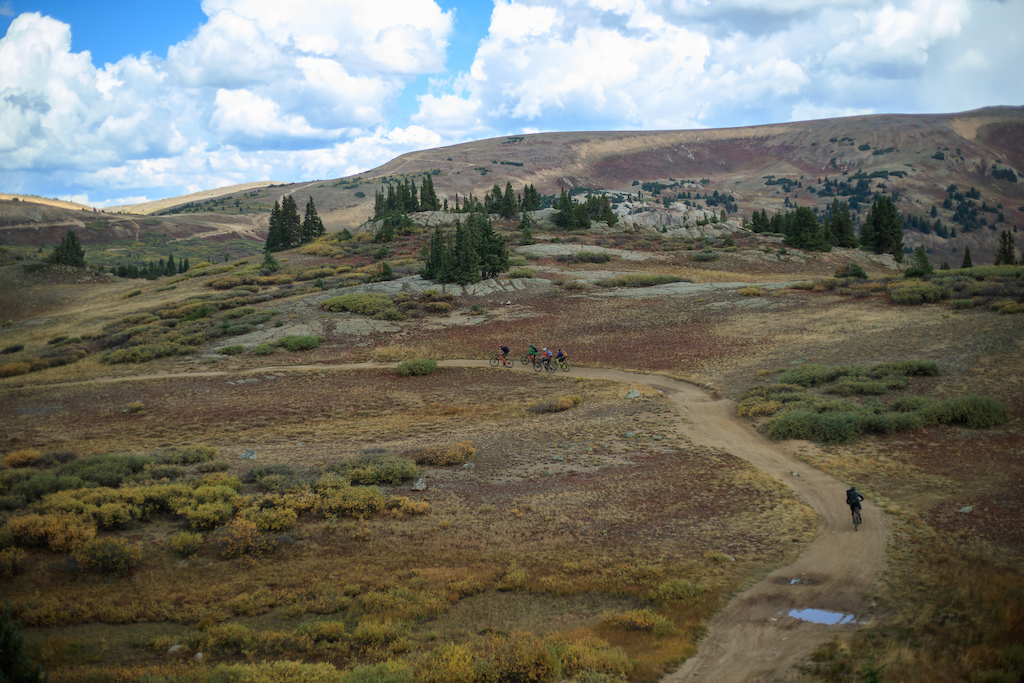 Doubletrack taking us towards Taylor Pass.
Thanks to Kitsbow for supporting the project. Thanks to Elliot for the photos. Thanks to Roger Carry for the video. 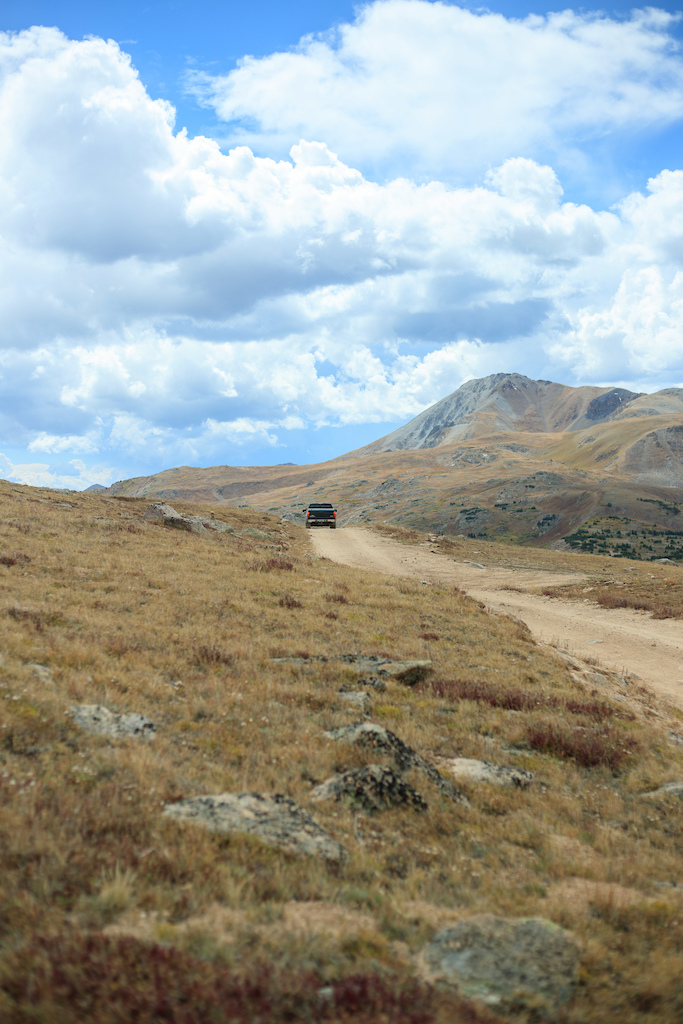 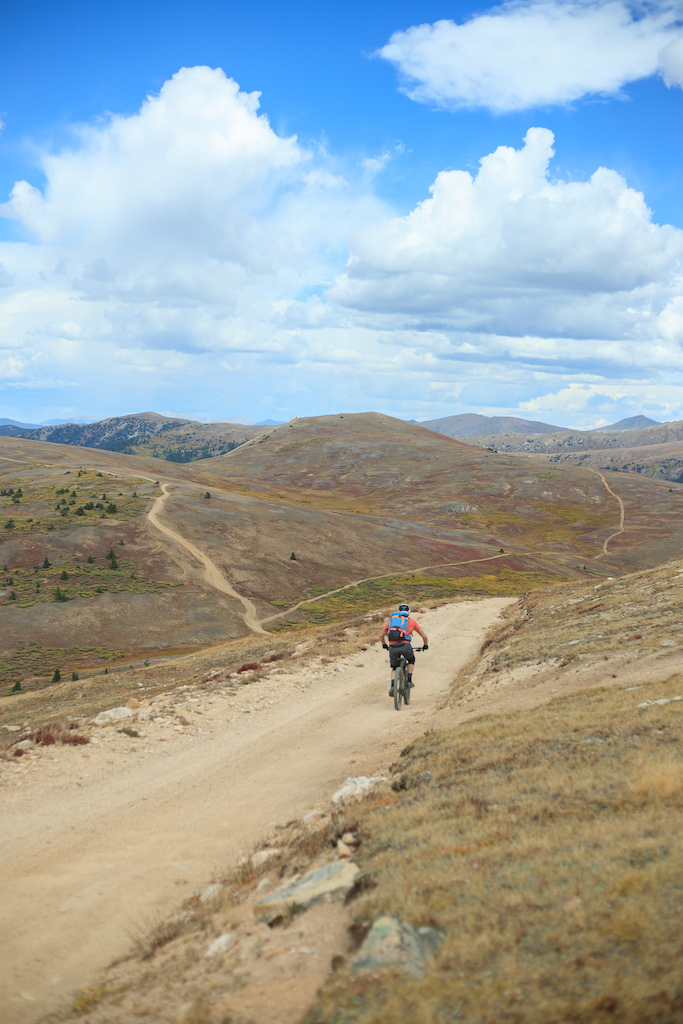 Back to fur coats and $10 million townhomes.

jwmorten (Oct 21, 2018 at 13:45)
"no sense of Adventure." Really. If I could afford a Kitsbow kit does that gaurantee me that I will have an adventure?
Thank you for increasing the amount of pretentiousnous in the world.

SangamonTaylor (Oct 21, 2018 at 13:51)
Bro, it’s only an adventure if we Instagram every mile and make a hipster commercial out if it bro! Do any of you brahs know if Crested Butte has an ATM for my trust fund?

pads (Oct 21, 2018 at 12:22)
Loyd: "Some place warm, a place where the beer flows like wine, where beautiful women instinctively flock like the salmon of Capistrano. I'm talking about a little place called Aspen."

funkendrenchman (Oct 22, 2018 at 8:17)
@Seawild66: There's a lot more to it than that. Yes, it's extremely difficult right now, but it's goes in cycles. The requirement is 4 years to be top priority, but it is possible (at times) to get something with less work history. It's all about what sacrifices you're willing to make and how long you can swing it while waiting.

WTF E-bikes for a Kitsbow add?

gooutsidetoday (Oct 21, 2018 at 14:30)
I was more intrigued by a few broken chains and derailleur hangers... Ive been on enough big backcountry rides with large groups to know that a broken chain is fairly rare, and hangers are too. Unless they're all boobs.

Dogl0rd (Oct 21, 2018 at 19:29)
Wow these guys saved American society by making it adventurous again. Good job. Gold stars all around.

jeremiahwas (Oct 21, 2018 at 22:02)
If a guy is willing to come along, bring a drone, DSLR, some lenses, batteries AND film the thing, I certainly wouldn’t complain if he’s on an ebike. In fact, you’ll get a better edit in the end because he won’t be as smoked and can ride up ahead, back and forth...whatever.

digitalsoul (Oct 21, 2018 at 19:02)
Those climbs near Crested Butte are brutal compared to our paved paths in Salt Lake. Much respect for those Colorado riders who do a ton of vertical climbing for what seemed like very little downhill reward.

zorba73 (Oct 21, 2018 at 19:37)
That face you make when you just executed a shit wheely knowing that it was immortalized on camera

Dude: "you got anything uglier than Pit Vipers?"

Orangesicle (Oct 22, 2018 at 17:46)
Isn't this usually a one day over and back?
Lots of super fun and technical options either way.
Awesome views up top (if not snowing).
Def some hike a bike.
And the tiny black flies all over you if you flat will cause permanent insanity... huhuhuhuh

LawsonRaider (Oct 21, 2018 at 10:38)
What an epic adventure! Rewarded with beautiful Colorado mountain scenery every mile of the trip!

AKA back to the Kitsbow headquarters

Kramz (Oct 21, 2018 at 23:14)
"But the Colorado rocky mountain high
I've seen it rainin' fire in the sky
The shadow from the starlight is softer than a lullabye
Rocky mountain high (Colorado)"

Sort like a moped when it runs out of gas.... Why wouldn't the ebike have some sort of digital reserve mode (like a moped! Which an ebike freaking is)

That just sounds like a normal weekend of riding.

Millwood (Oct 21, 2018 at 17:02)
Great ride. Great video. Great story! Thanks for sharing it. Teocali Tamale is the best reward after a good day of pow or dirt.

Kramz (Oct 22, 2018 at 23:50)
@the-lorax: Yeah, I live driving distance from the Rocky Mountains in Canada, but I have a lot of problems that would keep me from moving to them, and not live in the city.
Post a Comment