Crankworx always seems to launch one young rider into the spotlight wherever it goes. In Rotorua last year it was Billy Meaclem, shortly followed by Matthew Sterling in Innsbruck and then Jordy Scott in Whistler. At the Crankworx summer series this year, it was time for Kasper Woolley to take centre stage.

Woolley is well known by Strava users in British Columbia as he currently holds 61 KOMs in the Sea to Sky area but more widely he should be known as the under 21 EWS pinner who finished on the podium at 3 of the 4 races he entered in the series last year. At the Crankworx Summer Series, he proved he was capable of mixing it with some of the fastest riders on the planet as he came second in the enduro, downhill and air downhill and 10th in the dual slalom. He ends the week 3rd in the overall as the one to watch as we head into the rest of the Series. 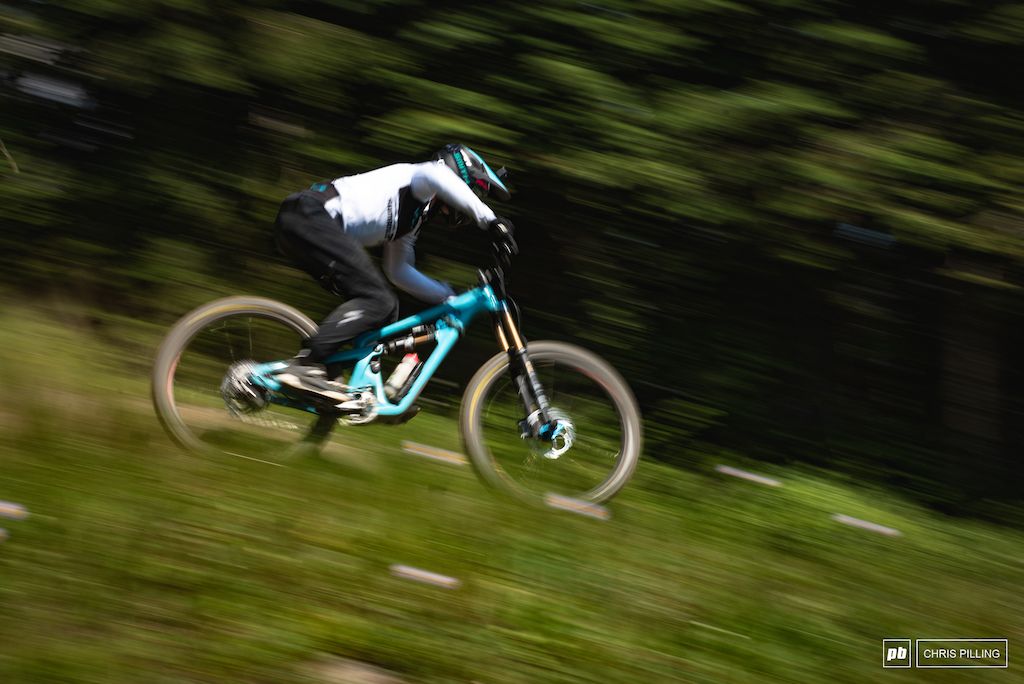 Some downhill racers will do 10 or fewer races a year so to pack 12 events into a 3 week schedule makes for a very intense load on both their mental and physical resilience. Crashes and injuries are already starting to play a part in the racing as Ainhoa Ijurco unfortunately found out at the start of the week after twinging her shoulder in the enduro and missing the rest of the stop.

Vaea Verbeeck may be sitting at the top of the overall standings at the moment but it very nearly turned out differently for the reigning Queen of Crankworx. In the slalom practice session she overshot one of the jumps and was laid down on the side of the track for about an hour with a suspected broken arm. Thankfully the arm was fine and she was able to shake off the soreness and take the win in the slalom, downhill and air dh events. It served as a stark warning though, if anyone is aiming for the overall title, looking after their bodies will be as important as their speed on the track. 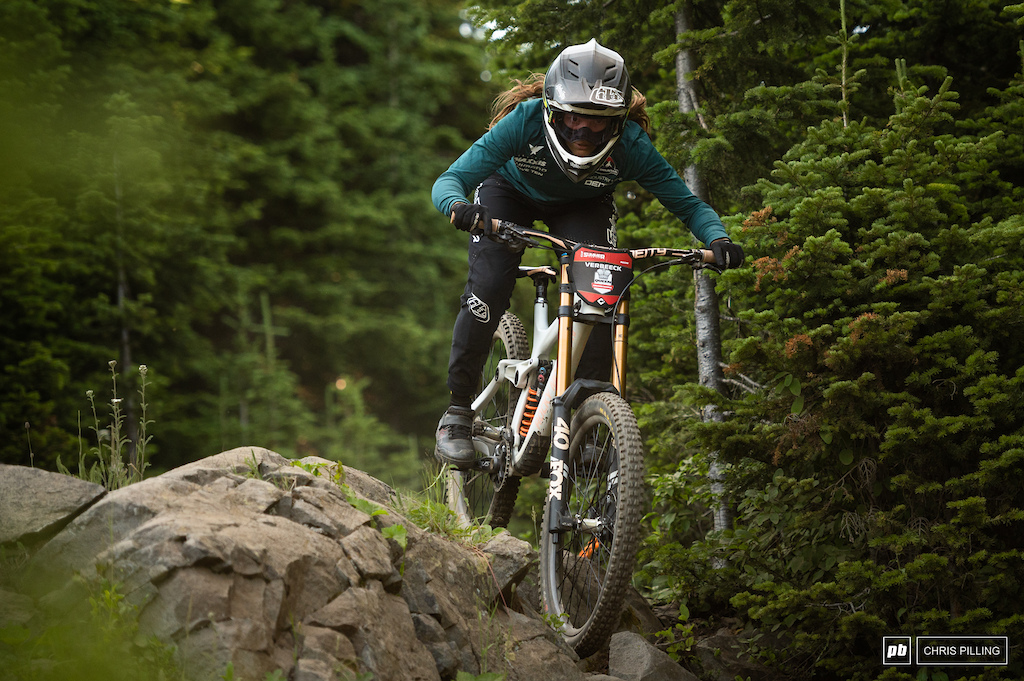 Live Drone Filming Isn’t Quite There Yet

With its remote, mountainous setting and courses that can be several miles long, mountain biking is not an easy sport to broadcast. We've often wondered if drones could be a way to improve access for fans and in Silver Star we were able to see that style of coverage for the first time. In both the downhill and dual slalom races, some parts of the course were filmed by racing drones with attached cameras that allowed us to follow racers like never before. Some clips are in the recap video to the right if you missed the broadcast.
We thought the drones provided a great alternative perspective for replays but for live filming there are still some improvements to be made. The noise of the drone drowned out any of the sounds from the race and ended up being pretty annoying after a couple of hours of racing. On top of that, cameras in a fixed position allow us to compare riders’ lines and judge their speed, this is something that gets lost as the drone flies on a different path every run. We still think drones could revolutionize mtb broadcasts, especially in enduro, and we applaud Crankworx for including them as part of the broadcasts at these events but there’s still room for improvement at the moment.

Brett Rheeder is more than a 1-trick pony

The surprise result of the weekend came from an unlikely source as Brett Rheeder humbled a bevy of full time racers and earned the bronze medal position in the downhill race. He admitted after the race that he had surprised even himself but should we have seen it coming? There were a lot of factors that played into Brett's victory here. Firstly, this is his home mountain so he will have been familiar with the conditions and terrain, if not even the track. Secondly, the course was short with the winning times coming in at around the 2 minute mark. This isn't far off the length of a Crankworx slopestyle or Rampage run so the fitness advantage of racers won't have come into play as much as on a longer track 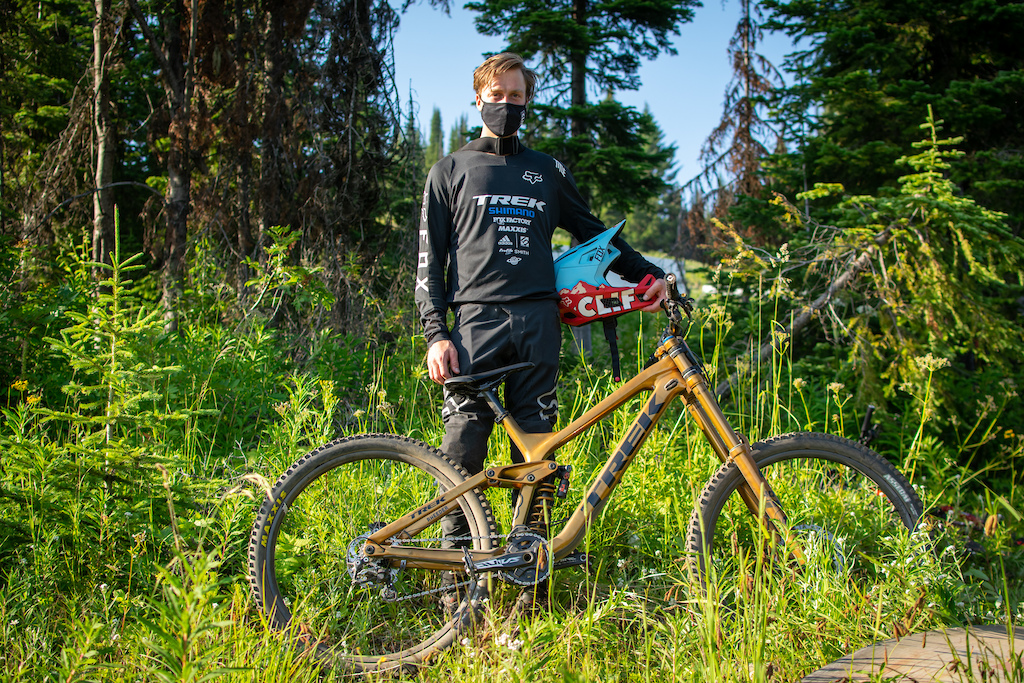 Finally, this isn't Brett's first stint between the tapes. He's previously posted a respectable 7th place finish at the Taxco urban downhill race in 2014 and then a 14th at the US Open last year. Brett is one of the most skilled bike riders on the planet so it’s no surprise he can channel that into race speed when he wants. He’s also no stranger to performing under pressure and delivering a perfect run exactly when it counts. We’re looking forward to seeing more of him in action throughout the Summer Series.

BeardlessMarinRider (Aug 4, 2020 at 2:00)
What Brett Rheeder can do on a big bike shouldn't be taken for granted- there's no doubt a ton of work gone in to the success you see today. Someone needs to dig out the first video he made on a DH bike when he was known as just the slopestyle-small-bike guy. Let's just say he has come a heck of a long way since then!!! Respec'

Bobadeebob (Aug 4, 2020 at 1:47)
If drones cover an area of the course that wouldn't otherwise be covered then great, but a fixed camera provides so much more detail that I'm nervous of fixed cameras being replaced with drones in the future. The further away the camera the smoother the course looks and the less impressive the riding. That cable cam they use at Lenzerheide totally flattened out the riding

Lanebobane (Aug 4, 2020 at 6:26)
I think the only advantage drones could bring over fixed cameras is cost reduction. The number of cameras you need to televise a WC DH MTB race is staggering, especially because you need a person operating each camera. A mix of both would be great: fixed cameras for the critical turns and woods sections and drones for the wide open sections (Les Gets beginning).

Rubberelli (Aug 4, 2020 at 10:49)
The drone shot following the slalom races is probably the best possible way you can film that event. Noise is easy to overcome as microphones can be placed on track and leapfrogged easily with WiFi extenders since an audio track requires little bandwidth.

paulskibum (Aug 5, 2020 at 8:34)
@Lanebobane: Surely the wide open section at Les Gets would be better done with a pivoting zoom capable fixed camera that could follow the action and keep the rider centred through a long run and easily reposition for the next rider 1 minute behind?

gus6464 (Aug 4, 2020 at 9:38)
Another take-away should be to stop using the garbage fire that is Vimeo for live-streaming. It's fine for pre-recorded but live their platform is hot garbage.

GumptionZA (Aug 4, 2020 at 1:46)
its very cool to see it quantified though, i remember semenuk won a poll here a while back about who's the best mountain biker ever, beating out Nino and other similarly talented people, but its still awesome to see how these guys aim their talent in different directions