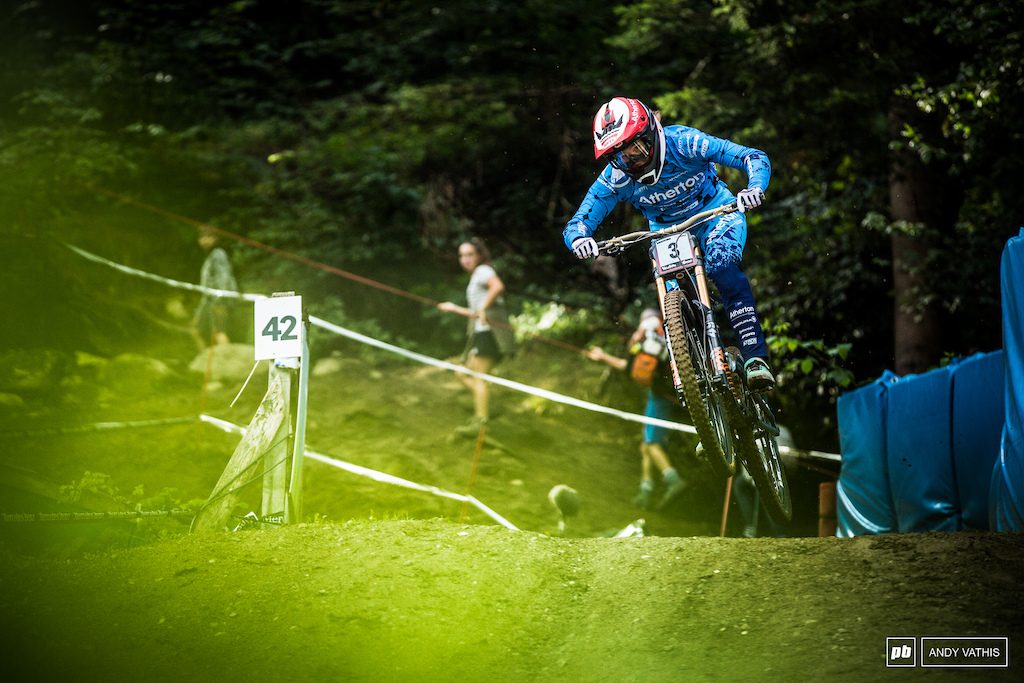 Here's what we noticed from behind the tape:

1. Greenland and Cabirou have risen up through the ranks together.

In Val di Sole both Marine Cabirou and Laurie Greenland picked up their first wins, but their careers have followed an eerily similar trajectory since Vallnord in 2015 when they picked up the Junior World Championships.

Just a year later they both entered the elite category and got top tens as first years. Then at the Val di Sole World Champs, they both defied the odds to earn top-five finishes. In 2017, they both picked up their first World Cup podium each - Marine in Vallnord and then Greenland just one round later in Lenzerheide. Last year both became World Cup podium regulars and now they finally have their first wins. With both racers just 22 years old, we’re sure there’s plenty more joint success for these two on the cards over the next decade or more. 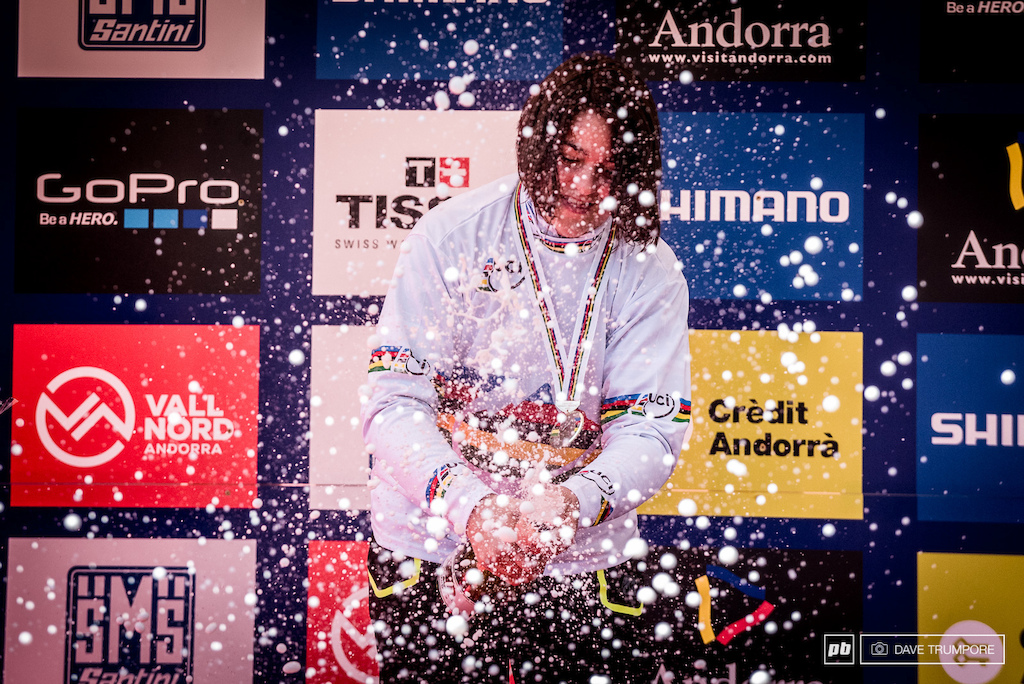 2. Both elite titles could be wrapped up in Lenzerheide.

It would take some pretty extraordinary circumstances but we could see two new World Cup overall champions crowned in Lenzerheide.

In the women’s overall, Tracey Hannah’s lead of 170 points puts her firmly in the driver’s seat. She just needs to score 80 more points than Cabirou and the title is hers with a round to spare. This means if she picks up the maximum 250 points by winning qualifying and the race, Cabirou will have to podium or better to ensure she’s still in the race in Snowshoe.

In the men’s field, it’s a bit closer with Bruni’s lead at 132 points but disasters for Brosnan and Pierron could mean the title goes to Bruni. 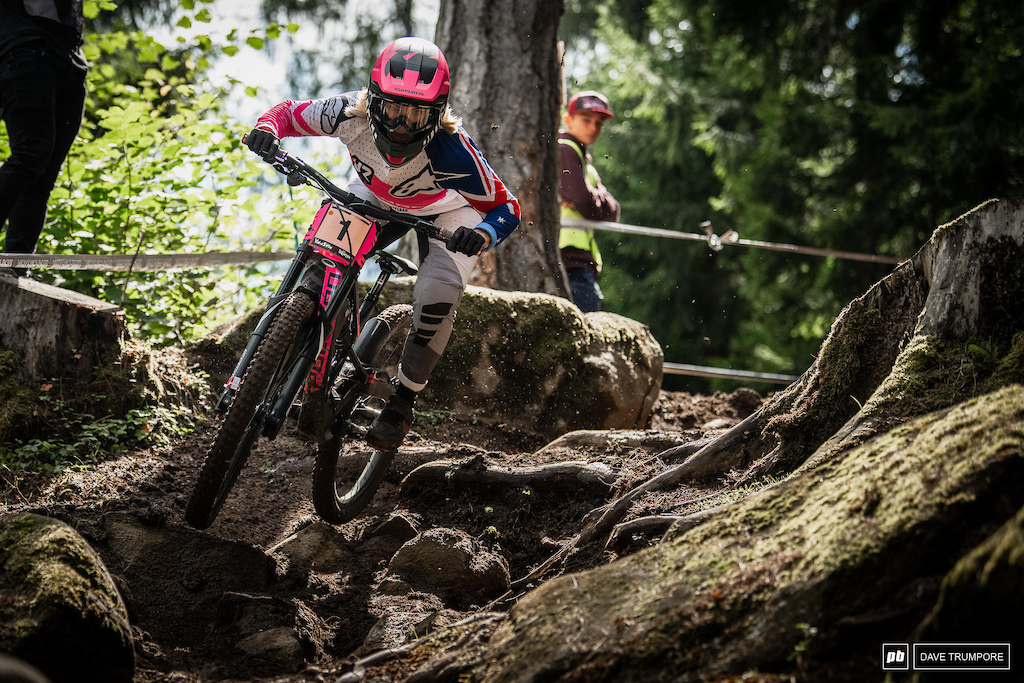 3. The top qualifiers raised their game for the live feed.

Qualifying may have been a huge washout but one positive was being able to see some under the radar riders lift their game as Saturday’s headline acts. Yes, they may have had the best of the conditions but of the four top qualifiers, Joe Breeden, Forrest Riesco and Davide Palazzari all got their best ever results and Faustin Figaret was also on for a top 20 before he crashed. Hopefully, they take confidence from the weekend and we see more of them in the future.

It was also great to see the reaction from the top guys as the lower-ranked racers came down. The camaraderie among the riders is one of many reasons this sport is so great. 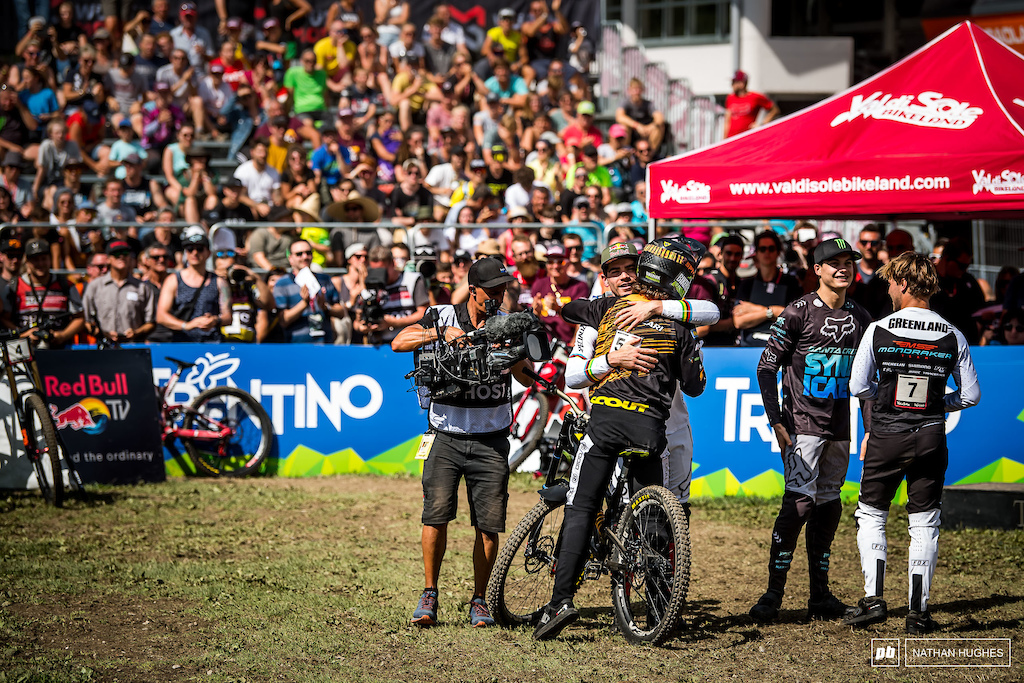 4. Five of the top ten elite male racers were from France.

It feels like we’re running out of ways to say “The French are good at downhill”, but there’s another new stat to simply underline it. At this round as five of the top ten elite male racers were from France: Bruni, Vergier, Thirion and the 2 Pierrons. The last time this happened was at Windham in 2015, when Gee Atherton got 4th and then positions 7-10 were taken up by Bryceland, Simmonds, Heath and Jones. It looks like competition is going to be fierce for the soon-to-be-announced World Champs team but it would be harder to pick a bad one than a medal-winning one at the moment. 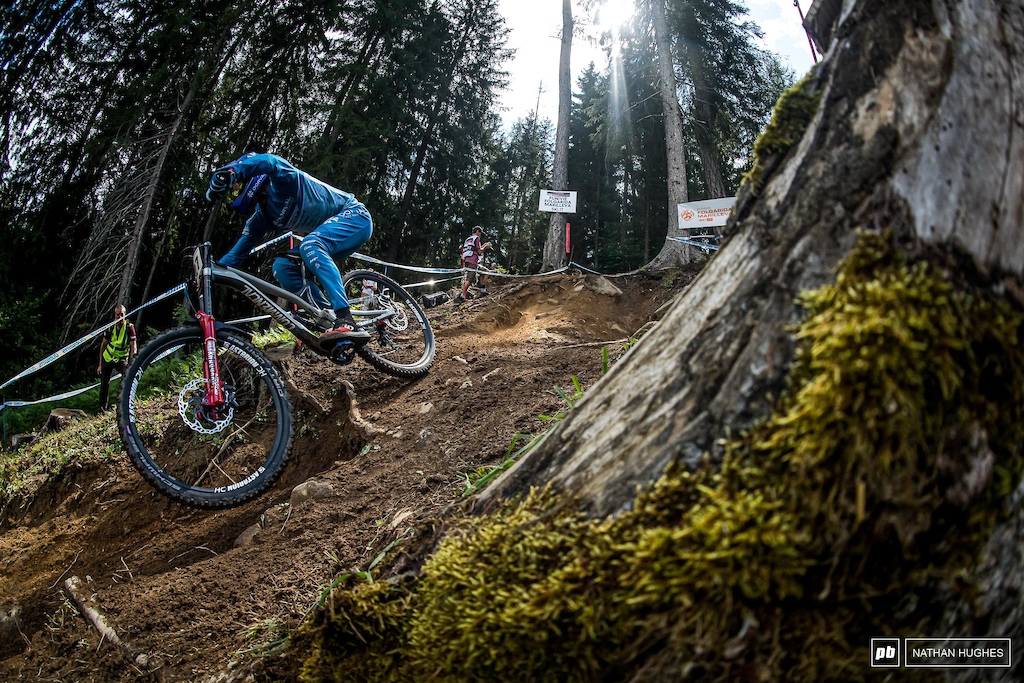 funkifab (Aug 6, 2019 at 23:55)
Check out how he qualified and it's even more impressing what he did that weekend!
www.vitalmtb.com/features/The-Denim-Destroyers-Terrible-Horrible-No-Good-Very-Bad-Qualifying-Day-and-he-still-got-9th,2753

Also nice move from Wyn to wash his bike for the re-run!

I will be in his restaurant the next days and give em an extra tip for his season and the future!

Jacquers (Aug 6, 2019 at 22:31)
@Adamrideshisbike: Would be fantastic for spectators, but the riders need to recover as well.

mmoon (Aug 6, 2019 at 17:35)
I received an e-mail this afternoon stating they had picked all of the winners and they will be announced soon. I think this means I wasn't a winner.

Toryt7 (Aug 6, 2019 at 17:59)
We are all winners for competing the challenge...but I’m still hoping they just haven’t announced to me that I won the slash haha.

bikesandbeers (Aug 6, 2019 at 19:24)
What I learned is you need a little luck on your side by virtue of the weather and racing order.
Cheers to the ones who: 1. weren't protected 2. qualified in the shit storm 3. had to race first before the track dried out.

irollones (Aug 7, 2019 at 5:41)
"3. The top qualifiers raised their game for the live feed." this, this allover. I got sick n tired of Rob n Claudio "oh they're only here because of blah blah blah oh oh wait - he's laying down a good run" /facepalm

jbeanbuyer (Aug 7, 2019 at 8:07)
@kleinblake: is it? Some of those unexpected top qualifiers have race teams.
Below threshold threads are hidden

rockchomper (Aug 6, 2019 at 18:51)
@Patsplit : It's likley she will be on the podium but I wouldn't say of course she will be there, I mean it's DH racing anything can happen , I'm sure we all thought rachel and tahnee would take the top spots for all the races but look how that turned out .
Post a Comment