The opening round of the 2015 4X ProTour took place in Winterberg, Germany at the weekend. Held as part of the Dirt Masters Festival, this event attracts thousands of fans who flock to Winterberg to watch 4X ProTour, IXS Downhill series and the impressive Bergline Freeride World Tour event.

The race had nearly 200 riders entered so practice was busy and the track had a constant flow of riders as everyone got to grips with it. With dry weather and the sun shining all weekend the track was super fast and dusty, absolutely perfect.

The big news of the weekend came before practice even started. Defending 4X ProTour Champion Tomas Slavik unfortunately had to sit this event out due to an illness that has sidelined him for the last 2 weeks. In addition to Slavik, his teammate Felix Beckeman was still recovering from a severe ankle break earlier this year and Australian Blake Nielsen unfortunately crashed in practice, fracturing his collarbone. 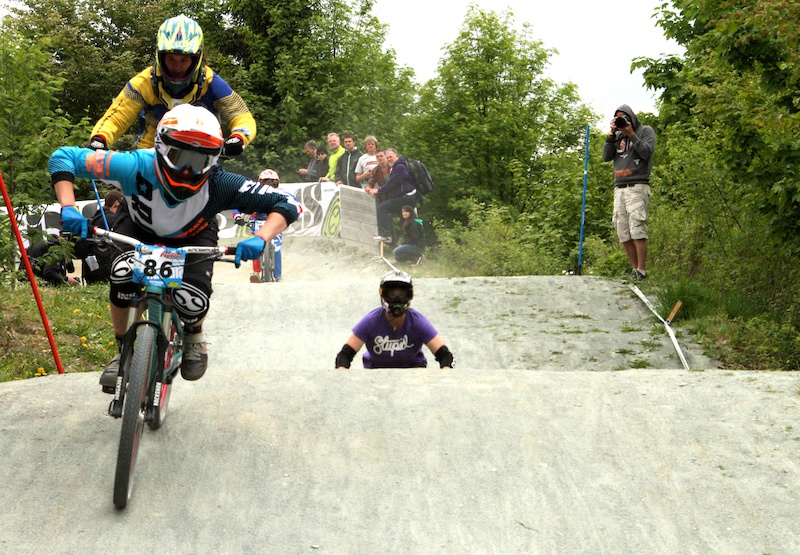 In the women's qualifying, it was an amazing ride from Julia Lackas as she took the fastest qualifier ahead of 2014 4X ProTour Champion Helene Fruhwirth and Jessica Schmulbach. 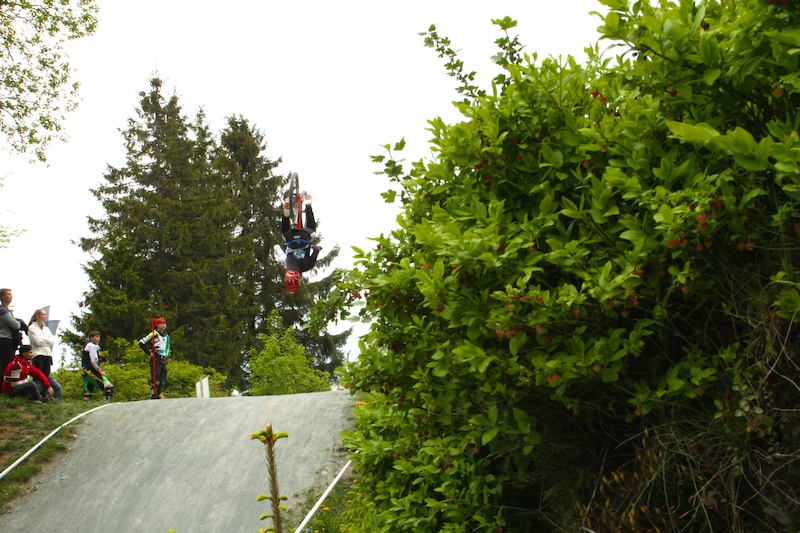 In men's qualifying, the action started early when UK rider Ricky Crompton did a backflip in his run. Everything looked great until he lost control after landing unfortunately dislocating his shoulder. 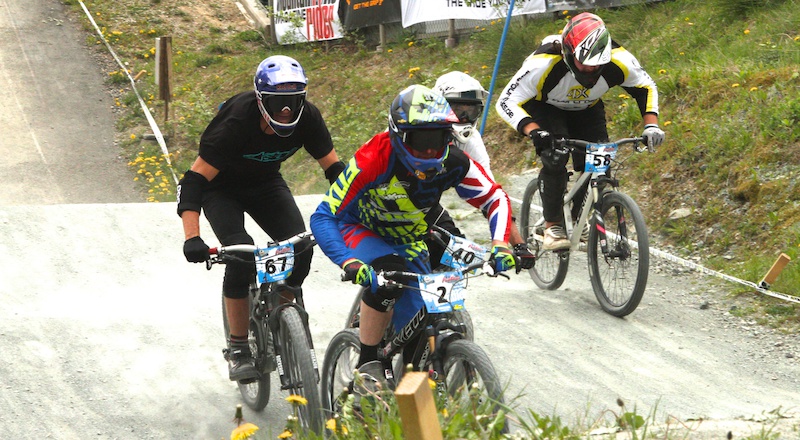 It was awesome to see Martin Soderstrom back racing 4X in addition to the PumpTrack and FMB events in Winterberg. He qualified in 30th position which was an awesome performance.

At the sharp end, it was Hannes Slavik (no relation to Tomas) from Austria who had a perfect run to take the fastest time ahead of Quentin Derbier, with Scott Beaumont in 3rd. It was great to see Joey Van Veghel back racing 4X and qualifying with a strong 4th place. Just 2 seconds covered the top 25 riders making this an extremely tight qualifying session. 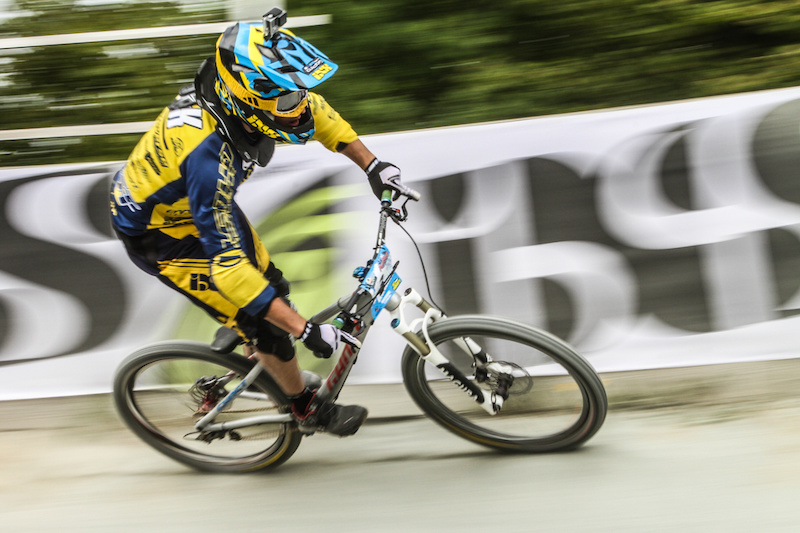 Onto race day. As mentioned the sun was shining and the track was perfect. In the early rounds there were a couple of top riders who went out. German favourite Aiko Gohler unfortunately crashed out in the first round of racing which would only place him in 48th for the day. Axel Fakowski who qualified in 10th also had a terrible first round and did not make it through and unfortunately Joey Van Veghel, after a great qualifying ride went out in round 2.

It was the quarter finals though, where some real shocks came along. Fastest qualifier Hannes Slavik went out in his quarter final. A coming together with Swiss rider Simon Waldburger was enough to end his day early. He will be back as one of the favourites at round 2 in Fort William. Klaus Beige, Martin Ogden and Jiri Penc all also failed to make the semi finals. 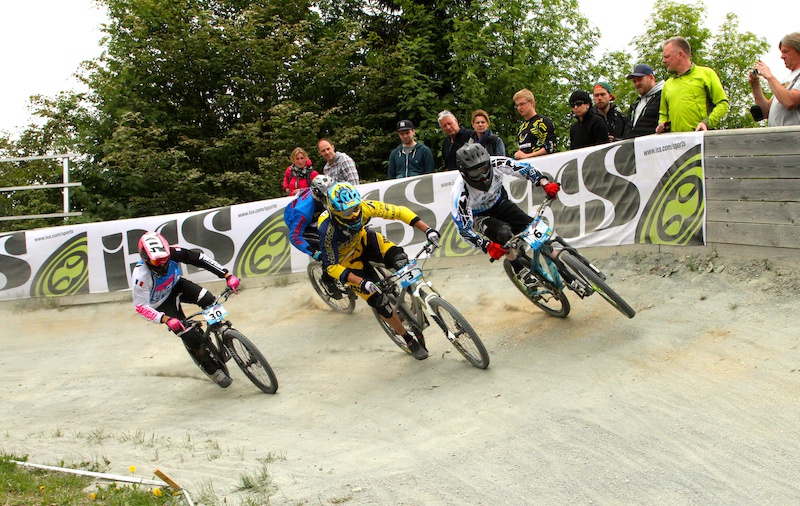 In semi final 1, Quentin Derbier led from start to finish, but the action was the fight for 2nd. Scott Beaumont was close to Derbier but Lewis Lacey was even closer. The three riders were wheel to wheel for the full track but at the finish line Derbier and Beaumont made it through.

In semi final 2, Simon Waldburger got the holeshot and rode a comfortable lap with Benedikt Last sat in a secure second place.

So onto the finals and first up were the women. Jessica Schmulbach won the small final to give her 5th place for the day and the final podium position. In the main final, fastest qualifier Julia Lackas took gate 1, Helene Fruwirth was in 2, Marisa Roth in 3 and Michaela Berakova in 4. Fruhwirth got the snap and led into turn 1. Lackas was close to her and got on her back wheel to settle into 2nd. Roth made a great pass on Berakova to move into 3rd. Lackas hounded Fruhwirth all the way, but just could not find a way past. Fruhwirth took the win from Lackas and Roth.

The men’s finals stepped up to the start. Lewis Lacey rode fantastic all day and was duly rewarded with winning the small final to give him 5th overall for the day. 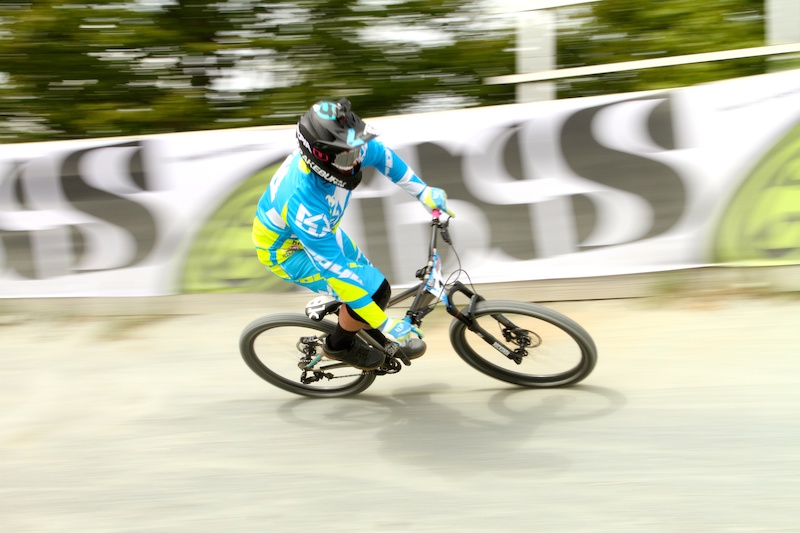 It was time for the elite men's final. Derbier took gate 1, Beaumont on 2, Waldburger on 3 and Last on 4. As the gate dropped, Derbier led into turn 1 with Last pressuring from the outside. Then from tight inside Waldburger made his move. The 3 riders came together and in a smart move Beaumont dived even tighter inside. On the exit of the turn it was Derbier from Beaumont. These 2 had a lead now over Last. From here to the finish it was a masterful display by Derbier and Beaumont. Absolutely flat out, tyres on the limit, full gas perfection. They were wheel to wheel and that was the way it stayed. Derbier took the win from Beaumont, Last and Waldburger. 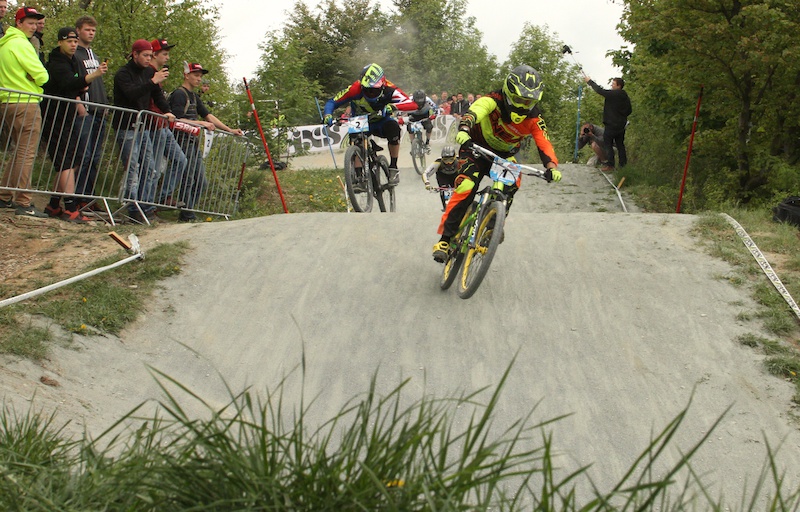 Quentin Derbier was clearly happy with the win:
‘I have had an awesome winter of training and it is paying off right now. I’m stoked to take the win here in Winterberg and leave here with the 4X ProTour points lead.’ 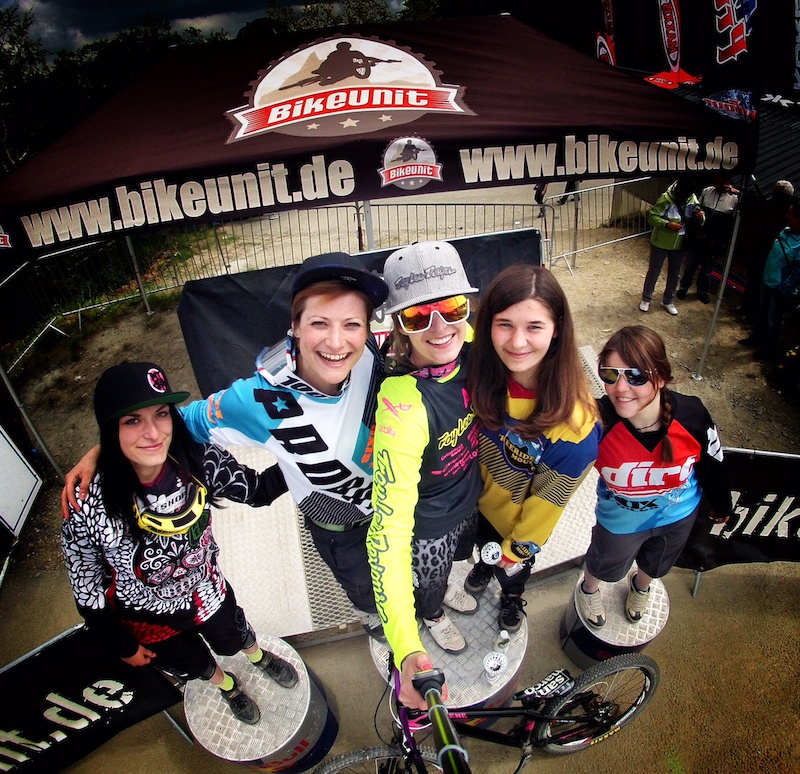 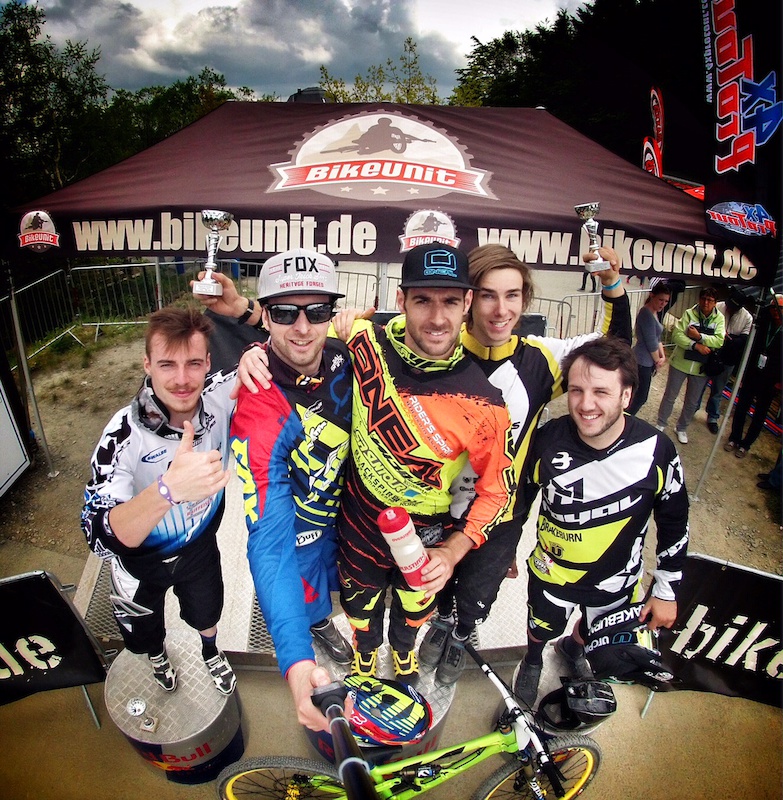 That was it from Winterberg and round 1. Some great racing, huge crowds, a few fresh names and the top riders from 2014 again showing they are ready to make a challenge for the 2015 title.

The next round of 4X ProTour is in Fort William on June 6th. We will be reporting from practice, qualifying and the race itself but if you have ever fancied attending a 4X ProTour race and you are free that weekend we cannot recommend it enough. It is a real showcase of these riders and their talents on hardtail mountain bikes.

For more information on the 4X ProTour, visit:
www.4xprotour.com / @The4XProTour

The4XProTour (May 25, 2015 at 23:55)
@udayorama maybe take a look at the other 4X ProTour rounds we will be visiting this year. For example JBC Bikepark in Czech Republic:

Best of luck on a BMX there

udayorama (May 26, 2015 at 14:21)
Sorry if I came off as rude. It was meant at a serious question but in hindsight I probably didn't word my question very well. I was more curious into what the format of 4x was since there is no 4x in my area and I haven't seen it very often on PB. Thanks.