5 Things We Learned at the Les Gets DH World Cup 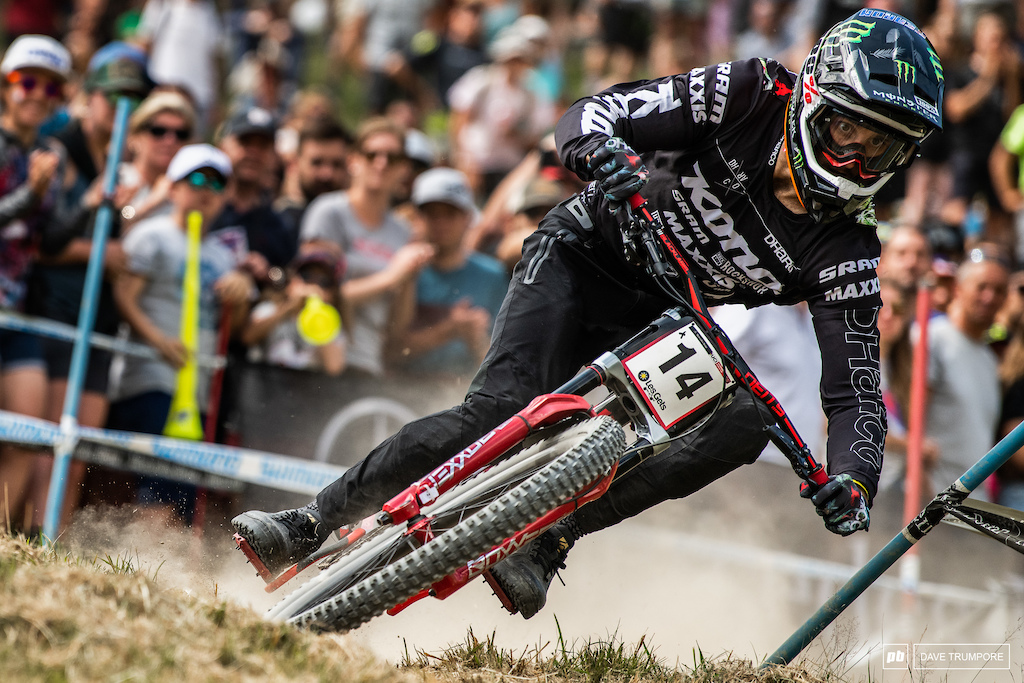 This season just keeps getting better and better. Here are five things we noticed from the sidelines as we get stuck into the second half of the downhill season:


1. Pierron is the grass turn master

For two races in a row, Pierron has proven that he's the fastest rider on grass turns on the World Cup circuit. In Vallnord, he pulled out a second on the last split alone and in Les Gets he backed it up with a dominant performance and put the men's field to the sword either side of the woods. Commitment, technique and precision all boil down into a rider who stands head and shoulders above the rest of the field on this terrain. Pierron will be a huge threat come World Championships in Mont Sainte Anne. 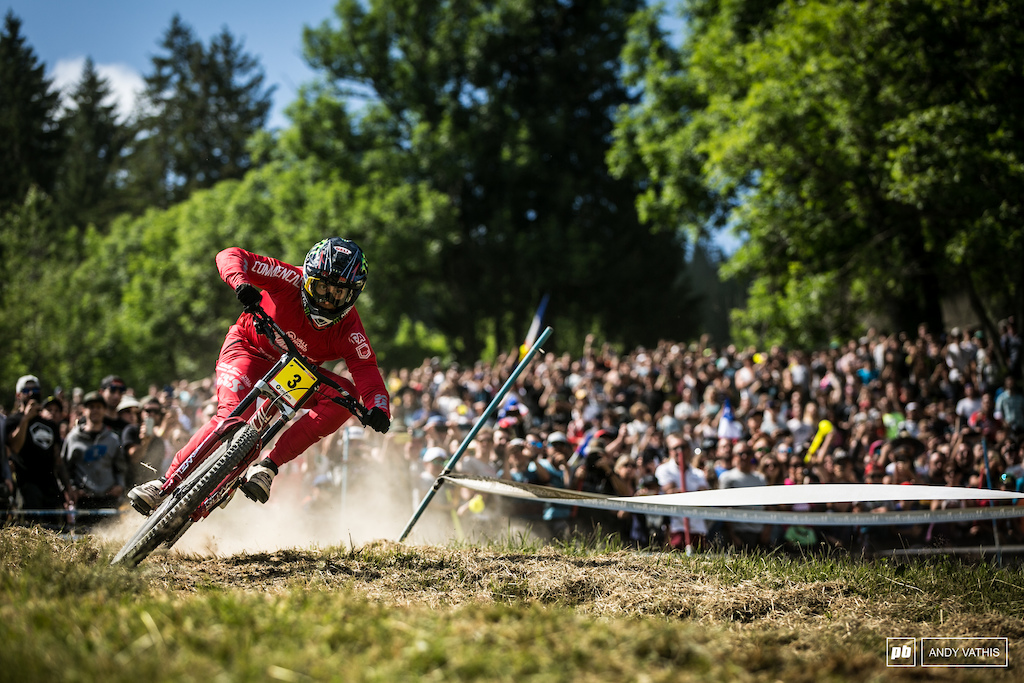 2. Thibault Daprela could wrap up the overall title with two races to go

After yet another win, Thibaut Daprela has all but guaranteed his victory for the second year on the trot in the junior rankings. He now has a lead of 120 points over Canada's Patrick Laffey in the series with a maximum of 180 points still on offer. One more win at any of the three remaining rounds will guarantee Daprela the title and you'd be hard-pressed to bet against him when he's won four out of five so far this year already.

Surprisingly, Vali Holl actually has a much slimmer lead as Anna Newkirk has been doggedly chasing her down all year. Vali has 60 points to play with and it's hard to see her not carrying it over the line but there's still a chance Newkirk could be battling for a title on home soil at the last round of the year at Snowshoe in September. 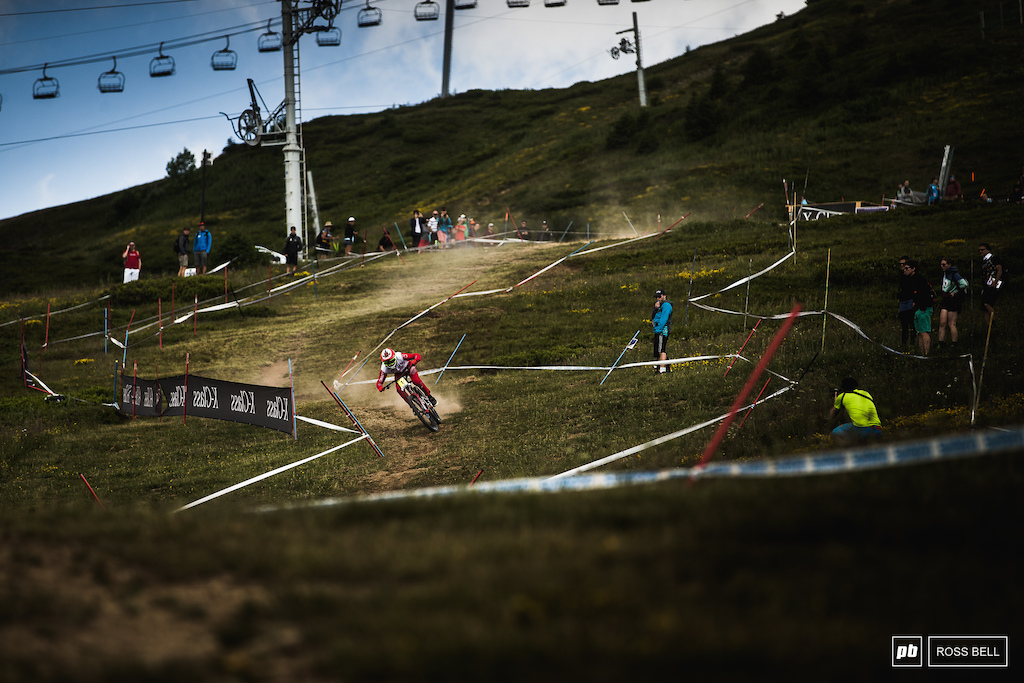 There aren't many juniors that have posted the fastest time of the day in World Cup history. Early in the morning, Vali put more than a second into Tracey Hannah's winning time and was also fastest through the speed trap for what could be the most impressive performance of her already prodigal career. Looking back through the history books, Finn Iles did the same thing at Mont Sainte Anne in 2017 when rain came in halfway through the elite race, but he and Holl are the only two that have been fastest on the day since the junior category was introduced in 2013. 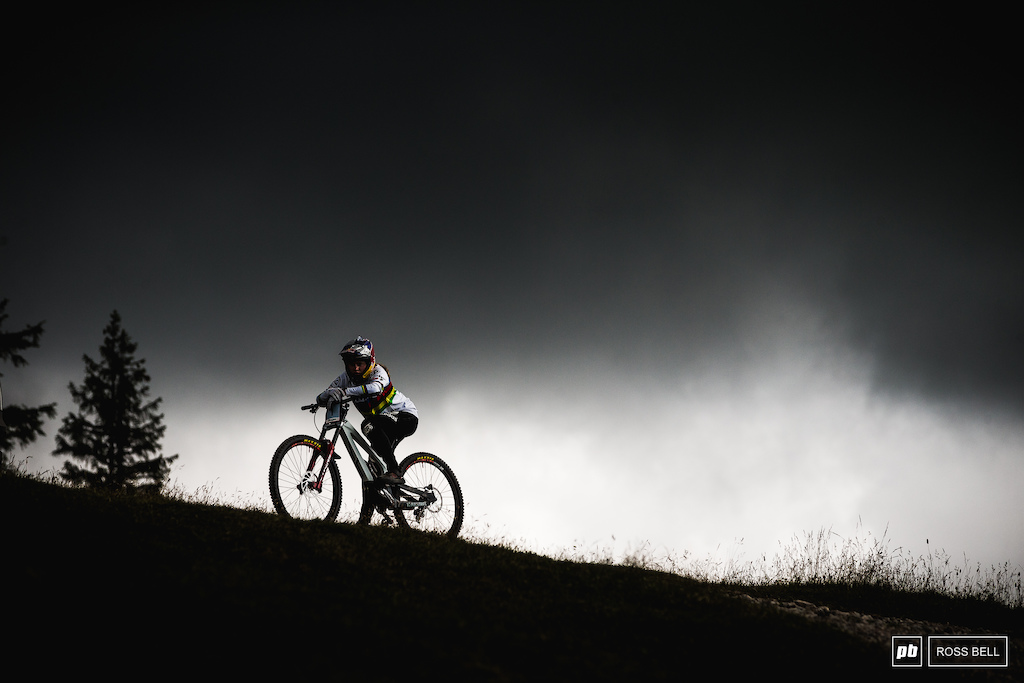 Yes, the conditions will no doubt have helped Holl but it's still an incredible achievement and, if it wasn't already clear, she's coming for medals next year.

Right from track walk, the final drop into the finish area was a big talking point, and with good reason. It wasn't the biggest on course but the landing was flat and took a lot of sucking up. In the first practice session of the weekend, it claimed Rachel Atherton, later on it took out Mille Johnset and then it spoiled Nina Hoffmann's run in qualifying too. In the finals, most of the field elected to roll the drop for safety reasons and just five women sent it. Those that rolled it lost about two seconds and it probably even cost Veronika Widmann a podium spot. It will be interesting to see if it is modified for next year's World Cup and the 2022 World Championships. 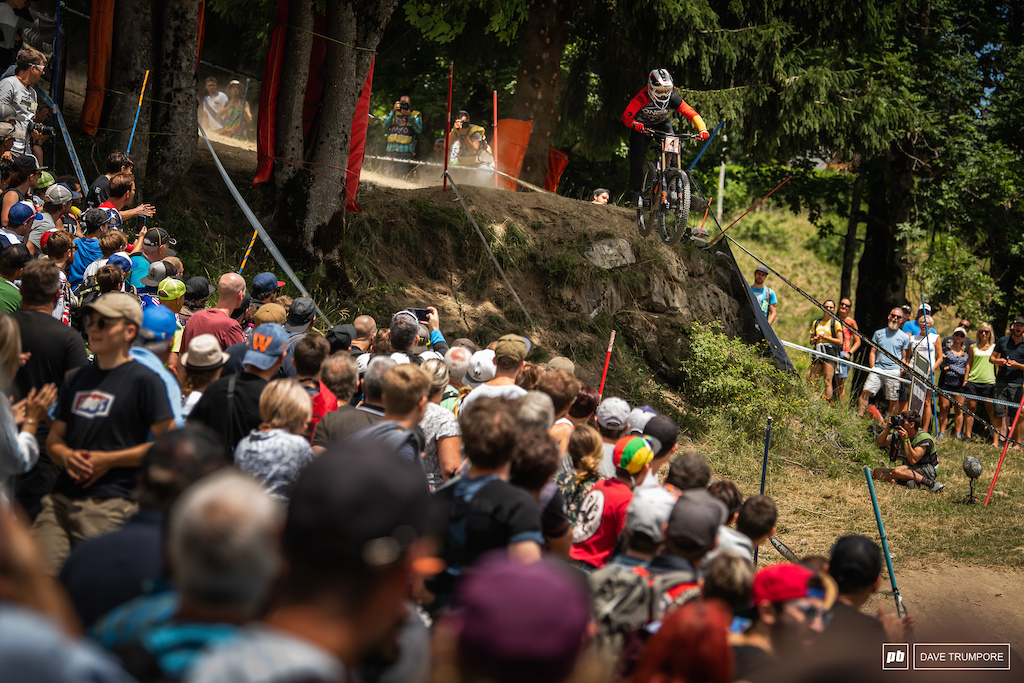 5. The French upped their game on home soil

The French have been fast all year, there's no doubt of that, but cheered on by a full-throated, patriotic crowd, they lifted the level even further in Les Gets. Yes, the same three riders were on the podium as in Vallnord but there were another 3 spread through the top 20, making it the most stacked deck we've seen so far this year.

It wasn't just the men though, Marine Cabirou came the closest to winning she ever has and she was joined by another Frenchwoman in the top ten for the first time this year in the form of Agnes Delest. Last but not least, we saw the first Frenchwoman in top three in the junior women's races this year thanks to Lauryn Chappaz. 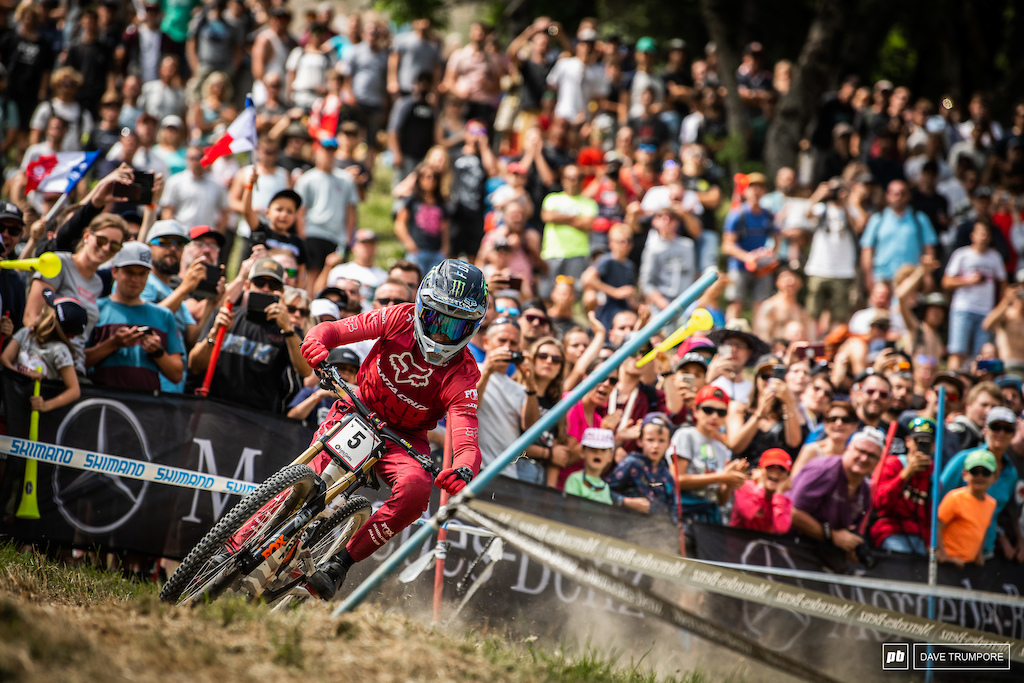 Socket (Jul 18, 2019 at 0:25)
Yep. Blows my mind that there are actually people in the world who can get down the hill faster than him, dude is an animal.

TheBearDen (Jul 18, 2019 at 2:13)
His run was such a treat to watch. Yeah other riders got down faster but his run looked like a film segment.

Garpur44 (Jul 18, 2019 at 5:37)
Why would you change the last drop? The fastest women managed it fine, the whole men's field made it fine. The whole point of a DH track is for it to be gnarly and technical and the difficulty of features and how riders handle them is what sets them apart!

orastreet1 (Jul 18, 2019 at 5:56)
Well - when you had one of the greatest female DH racers of all time blow out her achilles tendon on said drop, might be one reason.

FloImSchnee (Jul 18, 2019 at 6:06)
Fully agree, that WC trails shall be gnarly and demanding, but I still think that flat drops are unnecessary.

Mugen (Jul 18, 2019 at 6:13)
Similar to how they changed the last drop in leogang after Thirion broke his back. All it needs is a more forgiving landing, it will hardly ruin the track...

dhx42 (Jul 18, 2019 at 7:10)
The drop wasn't hard; the landing sucked. There's a difference between technical and challenging terrain and bad trail building, which the last drop was...

mtbikeaddict (Jul 18, 2019 at 12:32)
Yep, all the fastest women made it fine, except those in the hospital/ with wrecked podiums/runs. Interesting definition of "fine". That said, i agree ob not sanitizing courses, but dangerous is different than technical.

Rubberelli (Jul 18, 2019 at 19:03)
@orastreet1: UCI will see the $$$ lost in having their top women all out with injury, the top guys getting injured the past couple of seasons too. Can't be good for business.

nicoweiss (Jul 18, 2019 at 22:17)
There is objective danger and technical danger. Of the first there should be the least possible, of the latter the max possible. Otherwise next year we see a 30m gap with a hole full of fire just for the gnar love. The amount of injuries this year is very high, what is the point in adding objective risk.

Sounds like music in my ears. Such a good time. And do not get me wrong, it is very good now but at the time i was young and a full gas passionate fan

OllieB278 (Jul 18, 2019 at 3:20)
I said a few things about the commentary from the previous round last week but I felt like the commentary was pretty good this week. So I will just keep going out on my bike rather than commenting and keep enjoying free world cup coverage. Keep it up Red Bull the track variety this season is class

iamamodel (Jul 18, 2019 at 14:04)
The adjectival form of prodigy is prodigious, but its meaning has moved away from its root. I would have arranged the sentence to keep prodigy as a noun.

ibis315 (Jul 18, 2019 at 19:45)
Vali Holl posted a great time, but it was against Tracey who rode conservatively and safely down the track without taking risks to hold onto her points lead. Not putting down Vali on her run. It was enough to beat most of the elite field, but Tracey held back.

EnduroManiac (Jul 18, 2019 at 5:55)
The "patriotic" crowd has been praised by Greenland and Brosnan among others for being really wild. They weren’t just pushing the French.

leopaul (Jul 18, 2019 at 9:28)
The crowd was amazing for everyone. But yeah it was nuts at the finish line when Bruni and Pierron came down

Preachey (Jul 18, 2019 at 3:03)
The racing was great but I hope entirely 1-line tracks with minimal tech don't become a consistent feature of the circuit.

Oh and lets do away with the 3 meter drops to flat, eh?

nicoweiss (Jul 18, 2019 at 22:20)
All out speed seems to have taken over from technical multi line riding. However times show top riders can go faster and faster. Sooner or later one will do more harm to himself than a broken tendon if we went down this ongoing path

Preachey (Jul 18, 2019 at 23:02)
@nicoweiss: Yep, I think we're already starting to see that riding at the limit isn't enough to win anymore - you have to ride beyond the limit and hope to hold on, and maybe the tracks needs to be built with that in mind. I'd rather see a few broken collar bones on a slow, steep, twisty bit of tech than someone breaking their femur and three vertebrae after cartwheeling at 70km/h

doncouzens (Jul 18, 2019 at 5:56)
What also stood out that in grass turns, keeping your feet on the pedals and staying smooth is not always faster. Didn't Ben Cathro do a test at the one race and the consensus was keep your feet on the pedals and stay smooth. Time for the GOAT to get a bit more rugged and wild, the one man who can take on those French flies.... But Pieron is a beast!

Mirks Plus (Jul 18, 2019 at 0:30)
ha ha I noticed that too - obvs a type o too many pink bike articles are not revised prior printing. Another fail Jolanda Neff with a Y. I did message them on that one but seems like they don't care. Sad.

The-Foiling-Optimist (Jul 18, 2019 at 12:40)
Fantastic that there are fellow obstreperous pedants here on PB. (I like to think I put the pedal in pedant)

Balgaroth (Jul 18, 2019 at 4:46)
Brendog and Minnaar did pretty well while Gwin is trying to get back to health and Mike did decent too.

LlamaLlama (Jul 18, 2019 at 2:59)
A drop on a WC course is hard and sorts out the riders who have the speed and skill to clear it from those that don't. Why would this need changing? Surely a course should challenge all aspects of riding; flat out speed, technical and steep, jumps, drops etc. If one feature is difficult for some riders then they need to up their game to compete with those that can send it rather than the track being tamed to accommodate them.

BeardlessMarinRider (Jul 18, 2019 at 3:10)
Busting an ACL landing a drop the course design suggest is doable is no joke. Rachael isn't a noob and if she struggled you would think there must be something up

flipoffthemonkeys (Jul 18, 2019 at 5:25)
@BeardlessMarinRider: rachel busted an ACL? i thought she ruptured an achilles tendon...