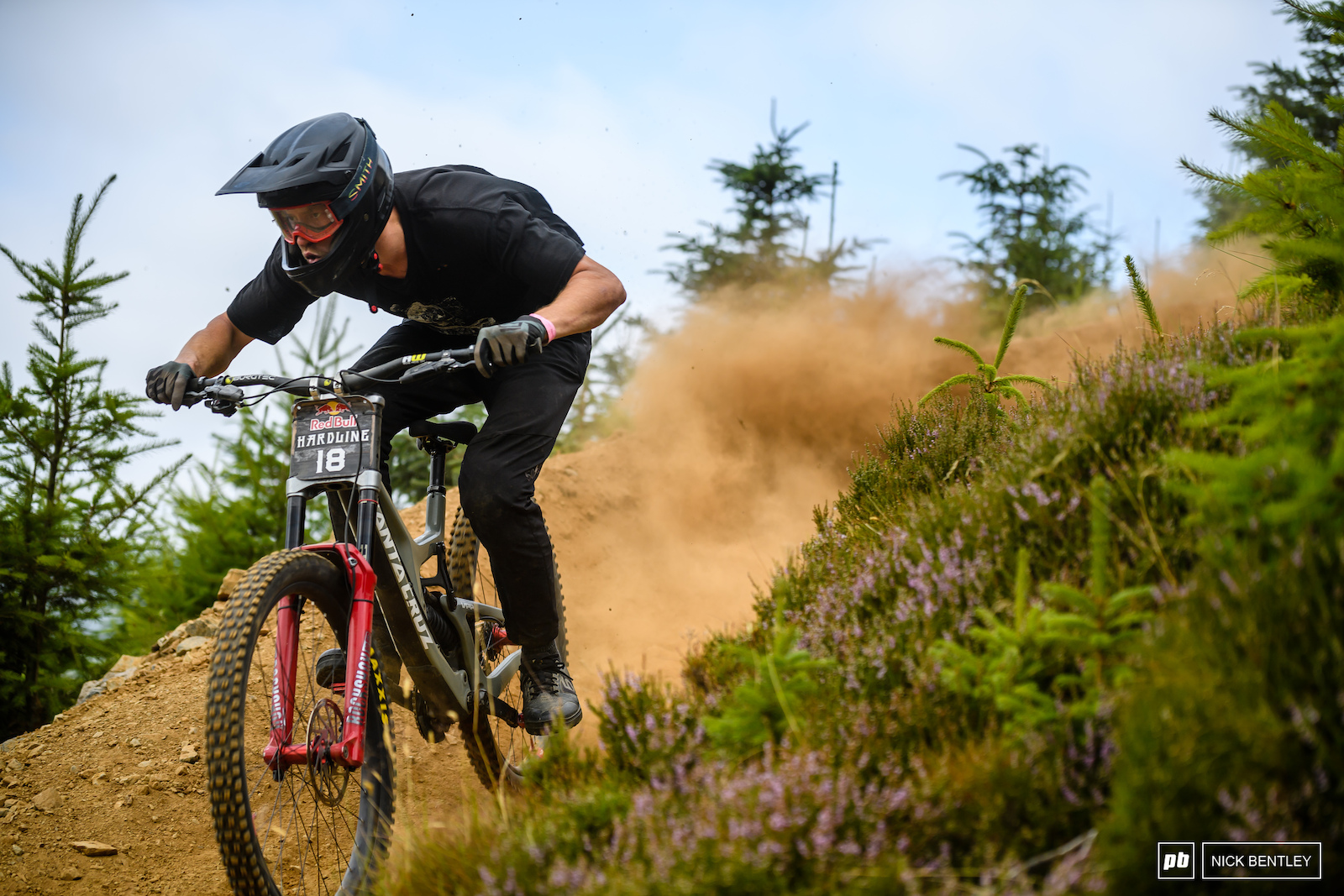 3 minute Interviews
From Red Bull Hardline 2021
Machynlleth Wales, UK
Words & Photography by Nick Bentley(Man Down Media)
That's a wrap people! Another year, another Hardline completed. We were lucky enough to catch some of the riders for a quick interview before the celebrations started!

Bernard, another win, that’s three now – how does it feel?

Where do you think is the easiest part of this track?

Easiest part is definitely the finish line for me. The last grass straight after the final jump, that is pretty easy and I really like that.

What about the toughest part?

Either the small waterfall jump, I find it really hard to judge, or the rock section before the road gap. It’s super hard, you've got to be very precise there.

What do you enjoy riding here the most?

Where do you think it’s won or lost here? 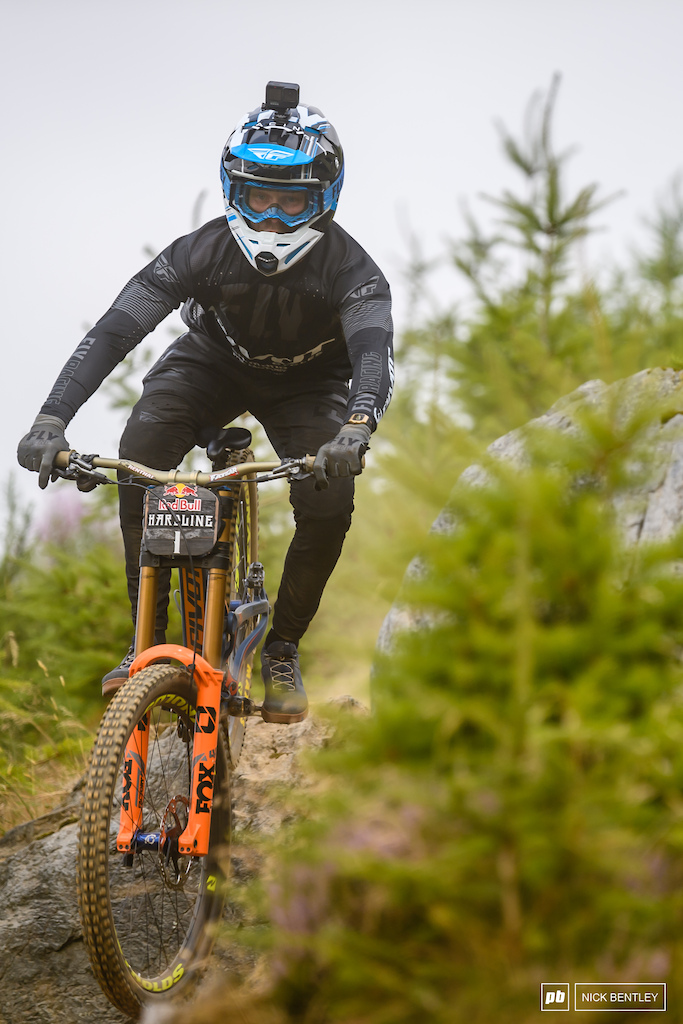 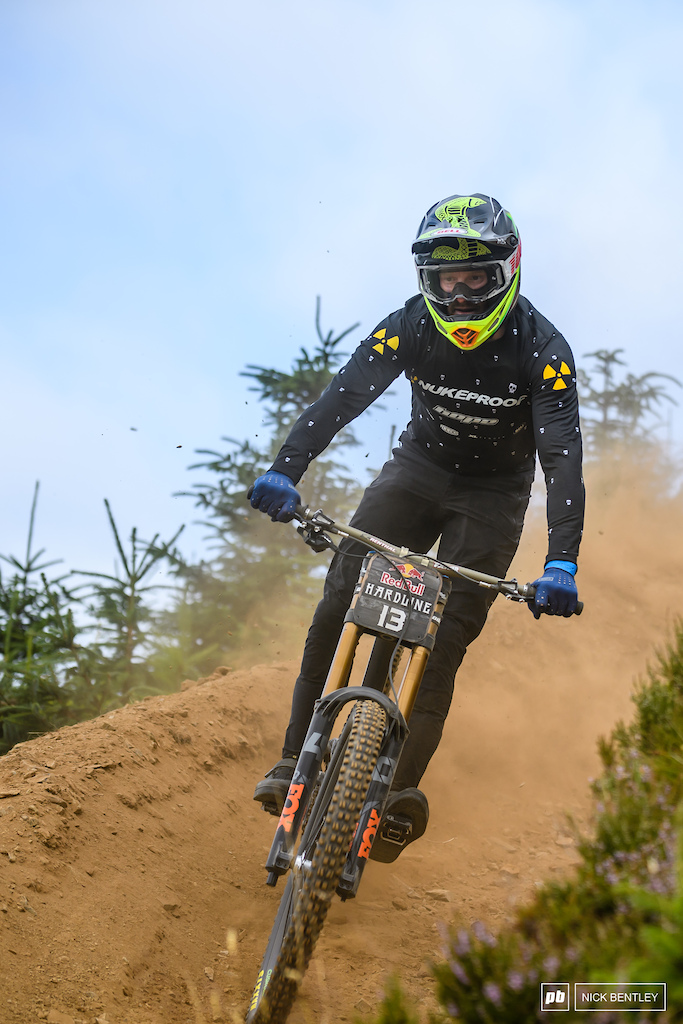 A different weekend without any spectators here, how have you found today?

It's been really good actually. I've really enjoyed it and we’ve been lucky with the weather. The course has been superb. Everyone's gone above and beyond to make sure all the riders are happy and I can't thank these guys enough for putting on the event, it's great to be back.

Do you think it’s been an advantage having been here before?

You could say that but now a lot of guys have watched it and are doing big stuff/features. I wouldn't say it is as much of an advantage as it used to be, of course, it is a bit don’t get me wrong, but everyone helps each other and everyone’s progress is very quick. A couple of days and people are already getting comfy with the track.

What would you say is the easiest part of this track?

That's a tough question. None of it's easy to be honest. Maybe the Road Gap: it's straight, no brakes, no pulling . . . nothing.

What about the toughest part?

Just mentally for me completing the whole course. Linking everything together and trying to maintain flow in between all the tech and nailing the run is the hardest bit for sure. I couldn't pick one part.

Is there any bit you enjoy most?

Probably the Cannon. I love that metal ramp, it's absolutely amazing! Then into that new drop off - it's a sick section, you get this sense of euphoria as you do it. It's bizarre. It's so good.

Where do you think it'll be won or lost today?

Definitely in the technical parts. The jumps are very limited speed-wise, then out of the gate to the Cannon would be a key section and again the road gap to the entrance of the field.

What would say is the easiest part of this track?

There’s not that much which is easy but I would have to say it’s the last traverse where you pump a little bit before turning left and coming out of the woods, obviously that's the only place that you can have a breather and still try and hide if you're racing. You've got to work it hard, but technically it's not that hard. So that's the only easy part really.

It's a hard one because the jumps are huge, they're hard to judge with the wind and how fast you're going when you're racing because you’re hitting a different speed. For this year I would have to say the new drop after the middle ramp because you’re coming in, braking and you don't often brake enough so it's a hard one to judge.

Which part do you enjoy riding the most?

I like big jumps that are not kicky so this actually suits me pretty well. To be honest, I was loving the middle ramp this year with the big, mellow transition. 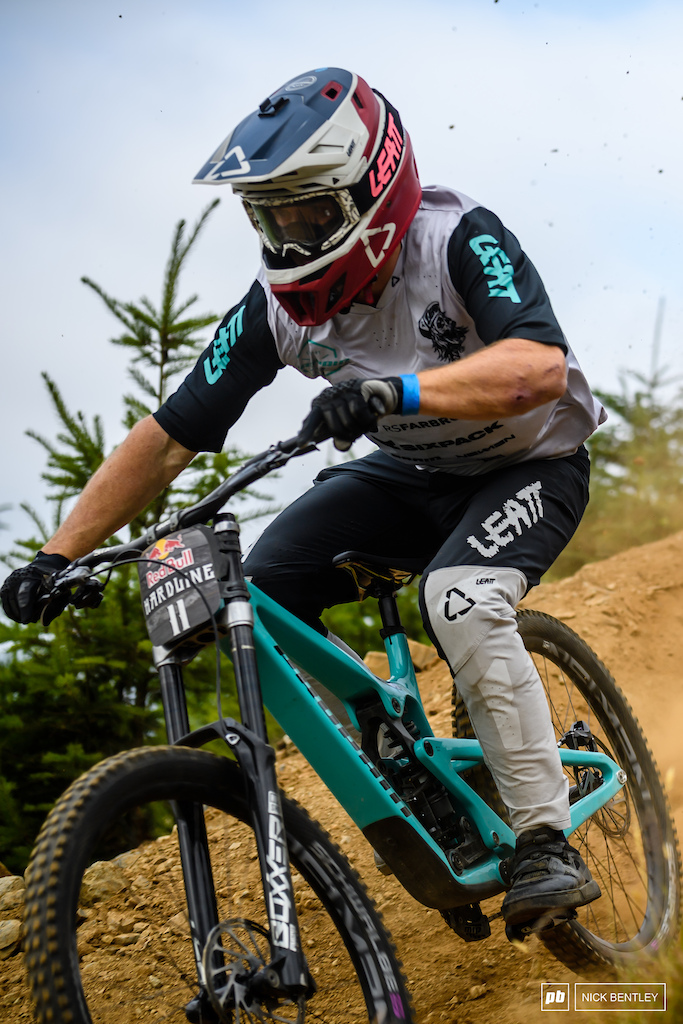 Where do you think the race is won or lost on this track?

Do you think it makes a difference if you’re back multiple years?

100%. It makes a difference coming back year after year. It was five years ago when I last came here. This year, just having way more practice days to ride it, I was able to attack a lot more this morning before the mechanical which sadly stopped me racing. But the more years you come here, the more comfortable you are with the jumps. You don't have to stress about the technical aspects because you know how they ride. 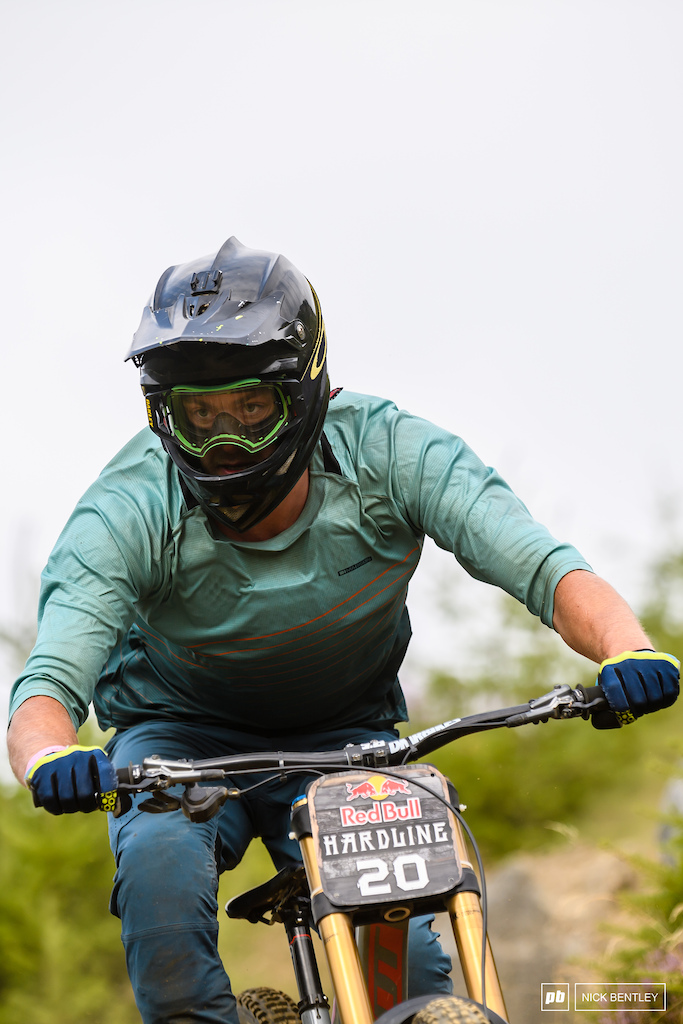 What do you think is the easiest bit of the track?

What do you think is the hardest section?

The new drop just because it's so blind, you don't know what your speed is coming through. Anyone can hit a jump knowing what the gravity speed is but hitting it on the brakes, it's such an unknown, so getting that ticked off is amazing.

What did you enjoy the most?

Where do you think it is won or lost here?

Because of the nerves all you think about is ticking off feature after feature but there are the bits in-between that you kind of just roll through while thinking about what's coming next. The fast guys, on the other hand, focus on those in-between sections and make it work, and that's where it is won or lost.

You've been here a few times now, do you think it gets easier the more you come?

No, it's terrifying. Crossing the finishing line is honestly the best feeling in the whole world. I hate the whole week but love it at the same time - it's the best week of my life and I'm just so happy to make it down safe.

What part of the track do you find the easiest?

It's hard to say what the easiest section is because then it's like: is it a feature or not? But I'd say a lot of the long and low jumps are quite easy. They’re huge but they're not like insanely techy, so I'd say the cannon out the woods and the bottom jump I find quite easy in that sense. The bottom jump gets hard when you get fatigued and your fingers can't hold on anymore, that’s quite scary.

What’s the hardest part of the track?

I find the little technical bits in between really hard. After you brake for the step down, it goes into a stumpy section and that’s so difficult because you have such an adrenalin rush and then you have to finesse between some roots/stumps else you end up clipping a pedal. Oh and those rock drops at the end, you land SO hard! When all you want to do is rest you’re smashing yourself.

What do you find the most fun to ride?

I'd say that big step up into the metal kicker. It's quite nice and predictable, I feel like I'm on an FMX bike. 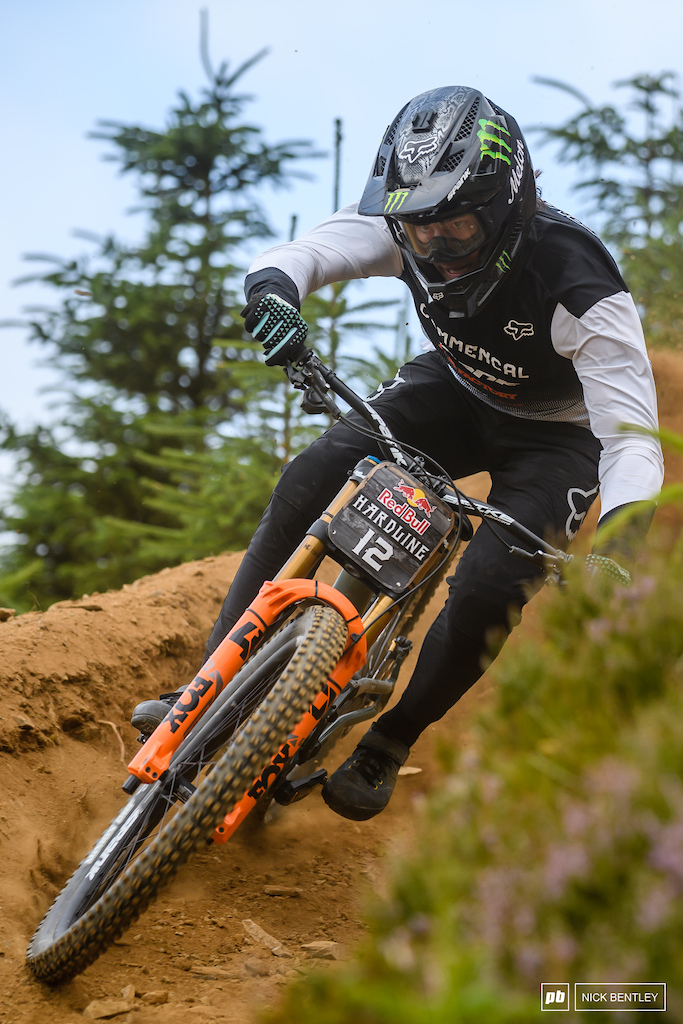 Where do you think the race was won or lost on this track today?

Probably the first section before you get into the woods, and that stupid droppy section on the way to the bottom, because all of those features you have to hit at a certain speed. All week we've been practising at that speed, and then race day comes and you scrub into them, it doesn't really work! Those critical sections are so hard because you just end up slamming your face on the bars.

A lot harder than I expected! I wanted to come here and be flipping some stuff, doing some suicide no handers, but I think they made the features bigger, and when I got here all of those thoughts went rapidly out of my head. I immediately got onto the train of thought of ‘let's just ride this’. If you consider it to be a free ride event, it's not that insane, but if you consider it to be a downhill track, it is absolutely mental! It's wild top to bottom, which is cool. 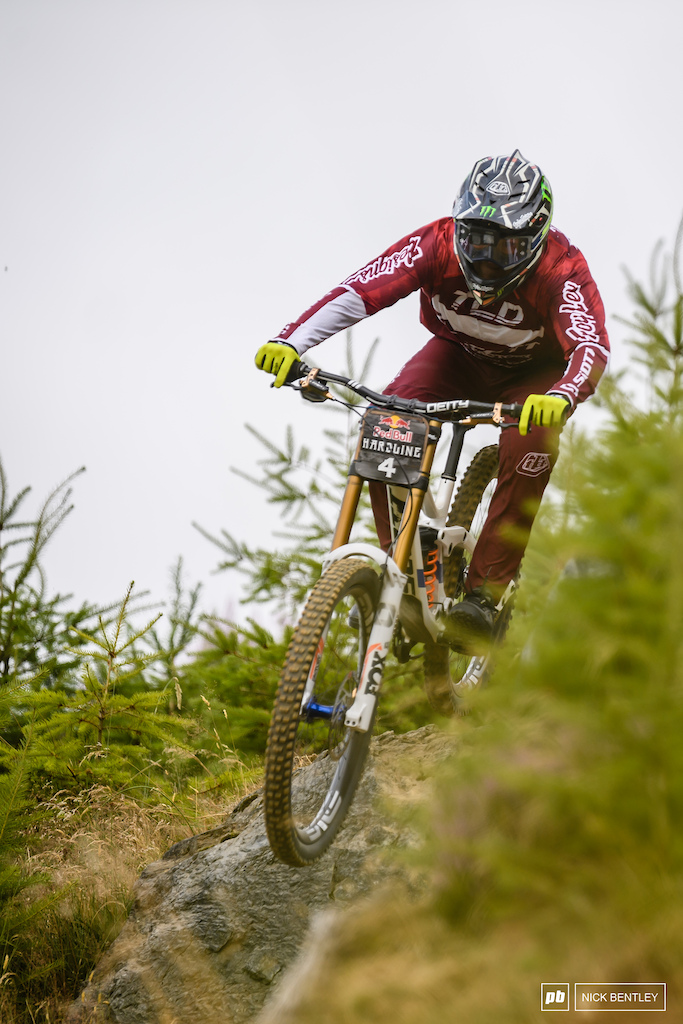 What do you find easiest on the track today?

Honestly, the big wooden ramp is easiest because you come really slow in and it's consistent every time.

What do you find the hardest?

The in-between sections, some of the rock gardens. The rock garden before the road gap is, for me, the hardest section. It’s so unpredictable, I hit it different every time.

Which section do you enjoy riding the most?

Definitely the cannon out of the woods was truly wicked this year. They did a good job.

Where do you think it's won or lost on this track?

Do you know what, honestly, in between the features. All the features you have to hit at one speed but it's all about how you carry speed in between.

One last thing is it true you rode with your pants undone most of the track?

Yeah, what an idiot! I forgot to do my buttons up and just had my zipper done up. So as I pedalled my zipper came down and I ended up doing my whole run trying to pull my pants back up – rookie error!

bigtim (Jul 26, 2021 at 5:57)
I reckon it needs a tank of sharks with lasers on their heads to jump over. And maybe the last 10m before the finish line is just lego bricks you have to walk over with bare feet.

artistformlyknowasdan (Jul 26, 2021 at 9:57)
After crossing the finish they must perform a gymnastics floor routine for 2022

sweelymcwheely (Jul 26, 2021 at 13:00)
@thustlewhumber: what does it take to get some friggin sharks with some friggin later beams on their heads!

If his bike wasn't wrecked he would've rode the next day.

zulki-fly (Jul 26, 2021 at 5:13)
Nice coverage, and a good vibe from all the social media coverage. Great job for the event, thumbs up for Dan Atherton and all the builder crews.

ROOTminus1 (Jul 26, 2021 at 4:34)
I still think the hardest part of the track for Ad Brayton is the tree he had an argument with a few years back

oneheckler (Jul 26, 2021 at 5:16)
That sense of euphoria ,yes is that sense of being alive ,it was the best section for sure ,not for everyone,but what an adrenaline release it must be ,congratulations to all that made this event happen

plyawn (Jul 26, 2021 at 8:11)
Everyone was pretty consistent that the features get all the attention but the race is won/lost in the techie in-between bits. The results back that up.

freerideneverdies (Jul 26, 2021 at 11:12)
@thustlewhumber: nah man, when you consider that many of the men are terrified of hitting some of the features, im quite sure that no women would dare. Not for now at least, but maybe in a couple years

quesoquesoqueso (Jul 26, 2021 at 11:52)
all the thumbs down trolls come out for this comment :.)
Below threshold threads are hidden