Join Pinkbike  Login
New suspension technology, groundbreaking new frame designs, a lightweight, affordable and efficient gearbox.... Those are the things that I'm always searching for at trade shows, but so far there hasn't been anything in that realm at Interbike. I'll keep searching, but in the meantime, here are seven little gadgets that caught my eye. 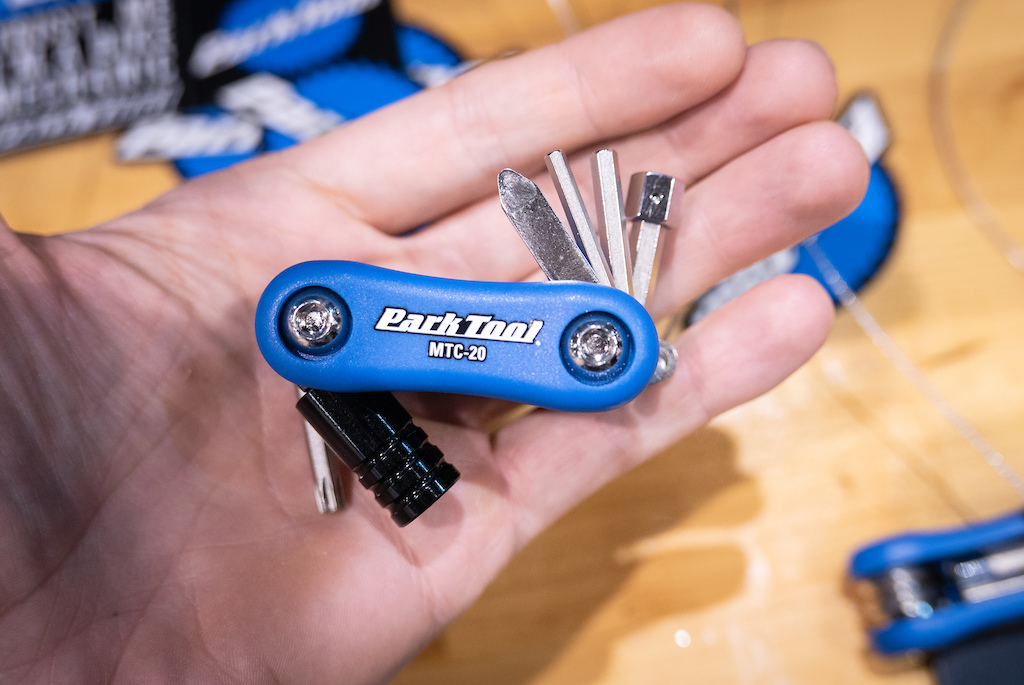 The MTC-20 is a stripped down, bare bones multi-tool that looks like it could be ideal for shorter rides or races. It's equipped with 3, 4, 5, and 8mm Allen keys, a screwdriver that can work as either a flathead or Phillips, a T25, and a CO2 inflator head. It's said to weigh only 74 grams, and retails for $22.95 USD. 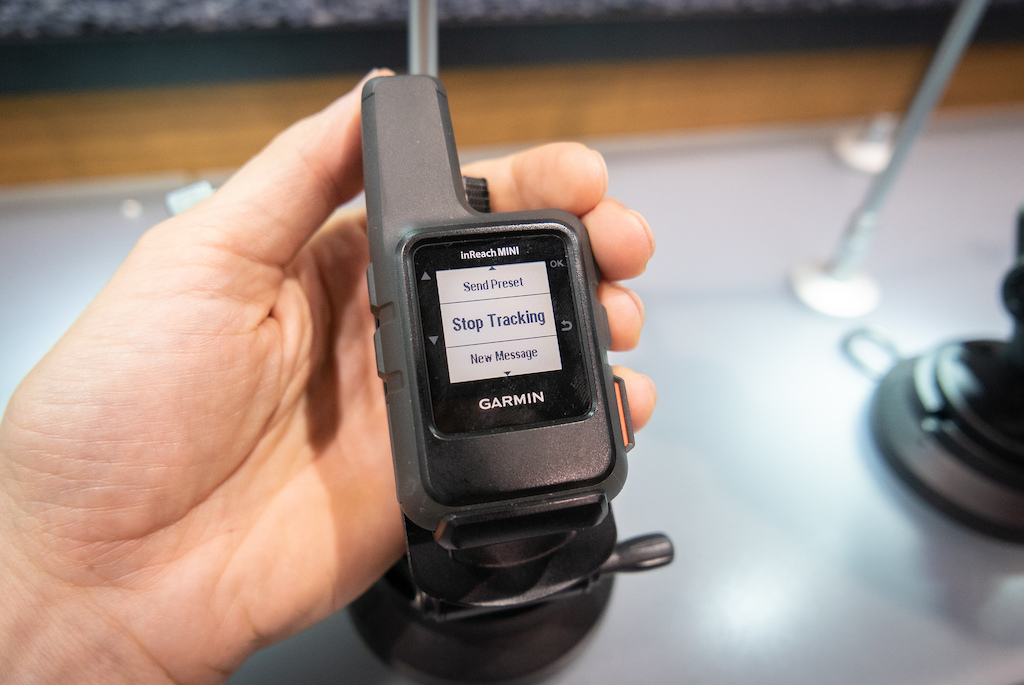 Planning to head deep into the backcountry, into a zone where there are hardly any people, and definitely no cell service? Sounds like a good time, but what if something goes wrong? Garmin's inReach Mini is a pint-sized satellite communicator that allows its user to send and receive text messages, or even broadcast an SOS alert if shit really hits the fan. The text messages are sent via the 100% global Iridium satellite network, and the SOS call is handled by GEOS, who are on alert 24/7. The $350 inReach Mini can also be paired via Bluetooth to compatible devices to open up even more features, including access to maps and aerial imagery. 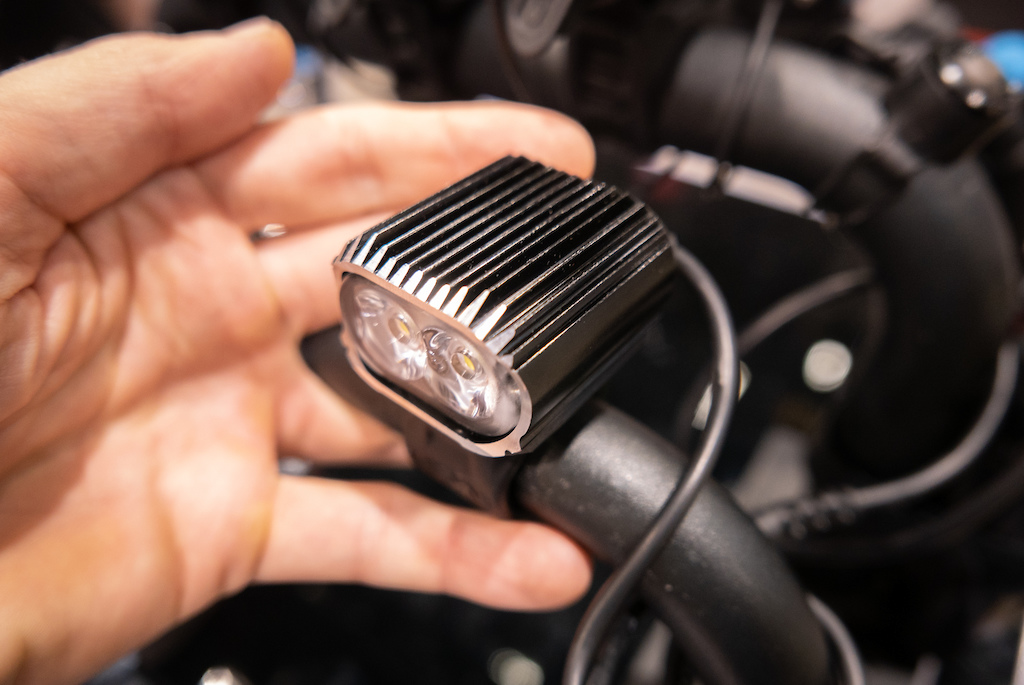 Night riding season is almost here, and there are more tiny but powerful options on the market than ever. The days of toting around a heavy water bottle sized battery are long gone, and Lezyne's new Multi Drive light is a prime example of what's possible. The $170 light puts out 1000 lumens, and can be mounted on a helmet or handlebar. The external battery pack gives the light a claimed run time of 3 hours in max output mode, and up to 18 hours in economy mode, which is 150 lumens. 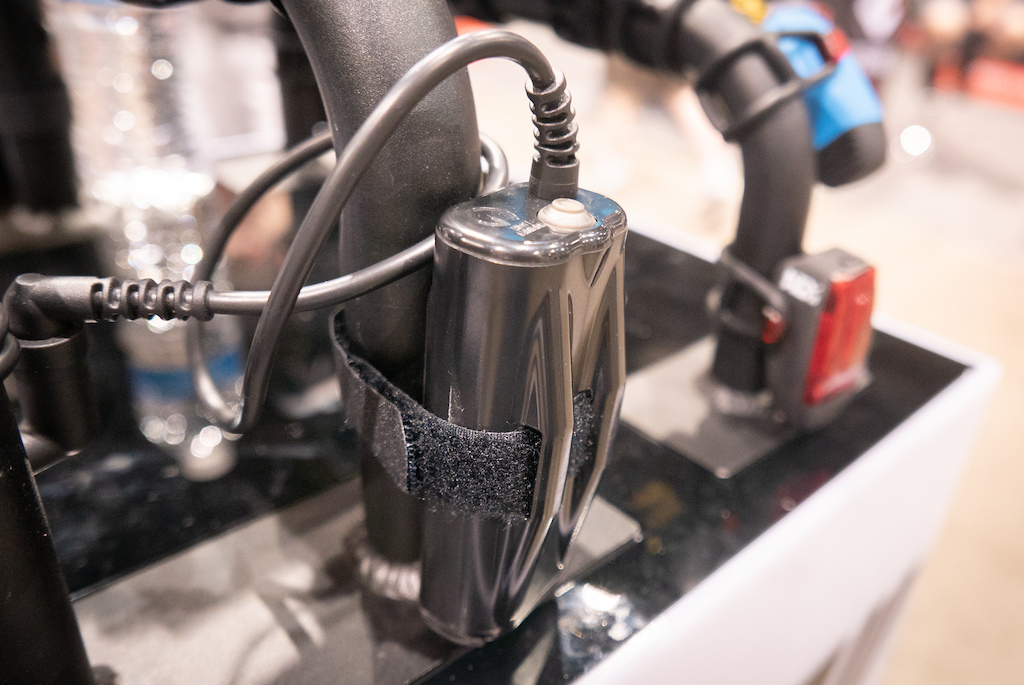 The battery comes with a 35" cord, which opens up a range of mounting possibilities. 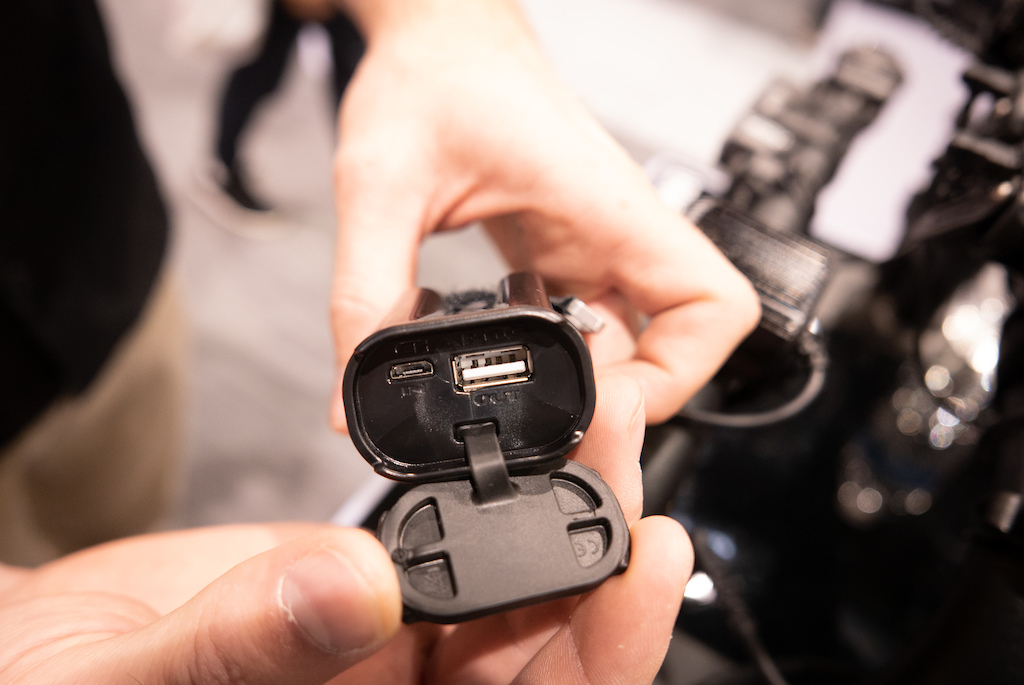 It can also be used as a power bank to charge a cell phone or GPS unit. 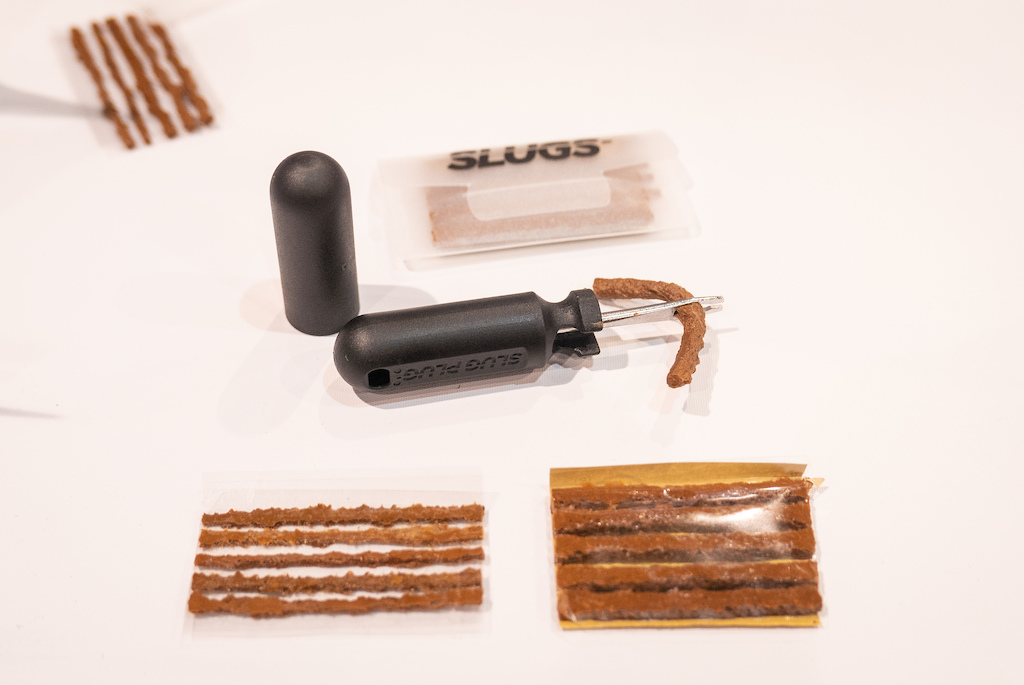 There are a handful of tire plug tools out there, but when the Slug Plug hits the market it's going to be an attractive option thanks to its $10 asking price. That price includes two strips of plugs, one thick and one thin. 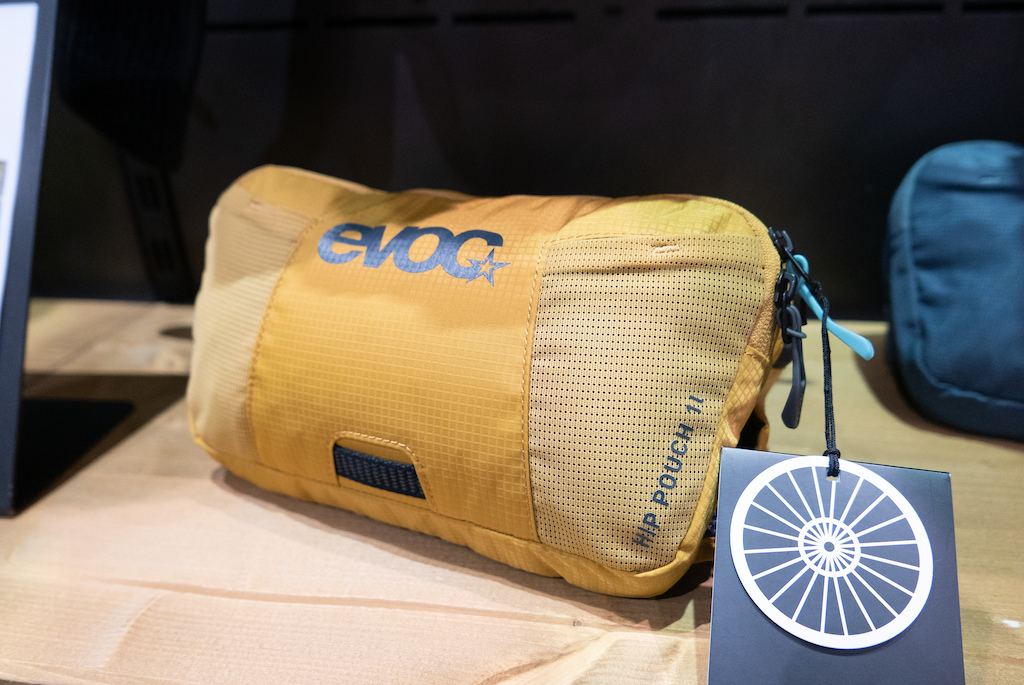 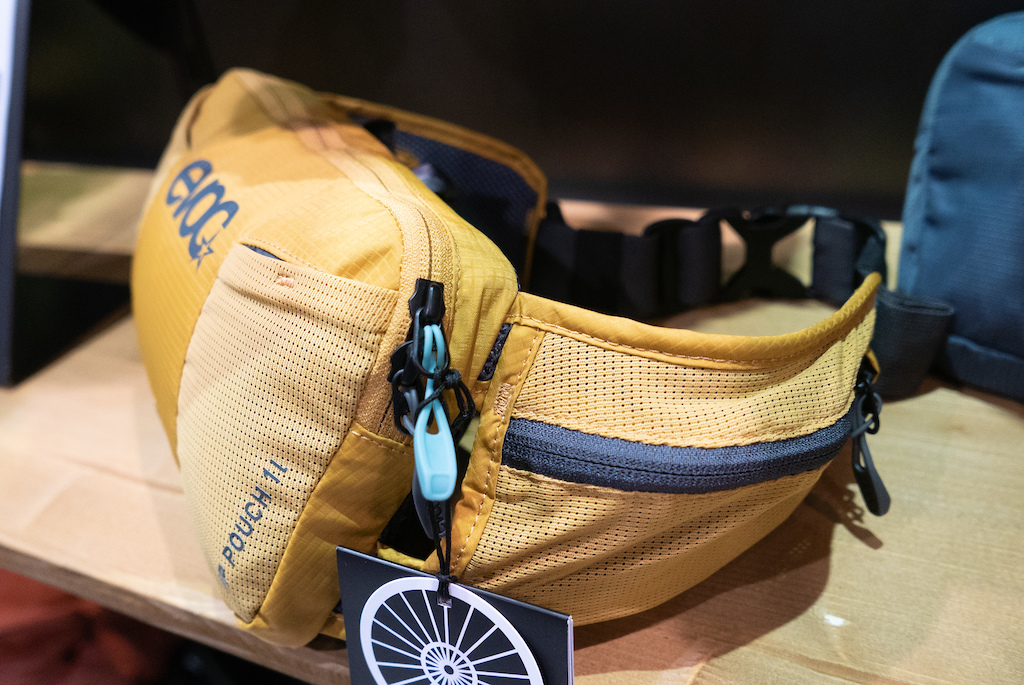 EVOC's new smaller hip pouch is for those quick laps, where just a few tools, a snack, and maybe an extra layer are all you need. There's a zippered pocket on each side, along with a larger main compartment. MSRP: $60. 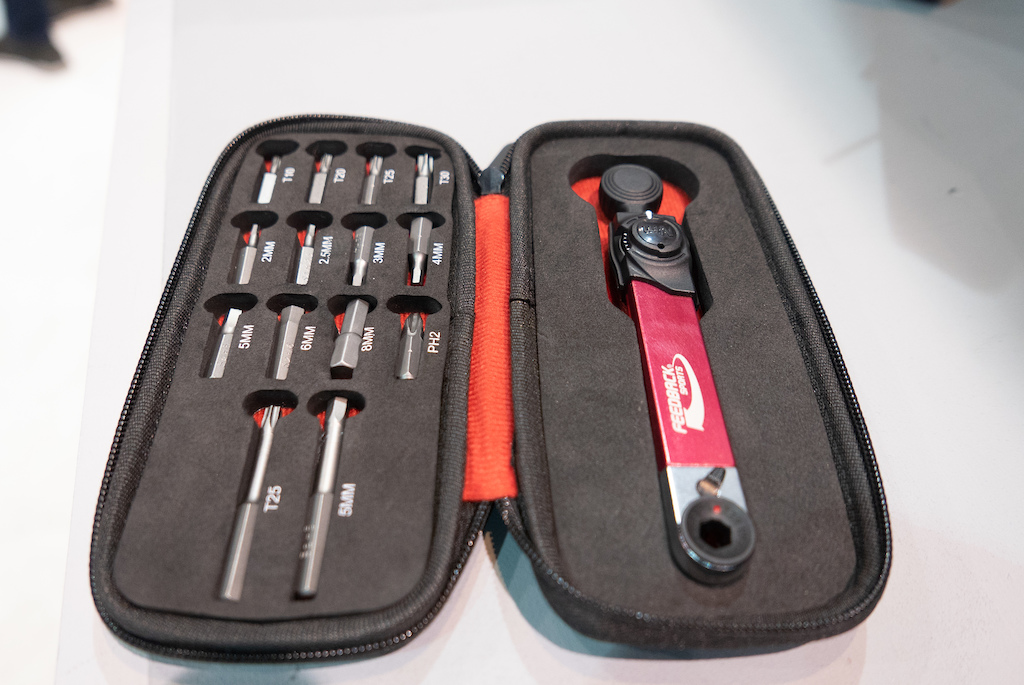 The Range torque wrench is small enough to pack in tool kit for a road trip, where it can be used to torque bolts between 2-10Nm. It's a simple beam style ratcheting wrench - you'll need to look at the dial rather than waiting to feel a 'click' in order to know when the desired torque has been reached, but that's also how Feedback were able to price it at $79.95, which includes a small case and 14 bits. 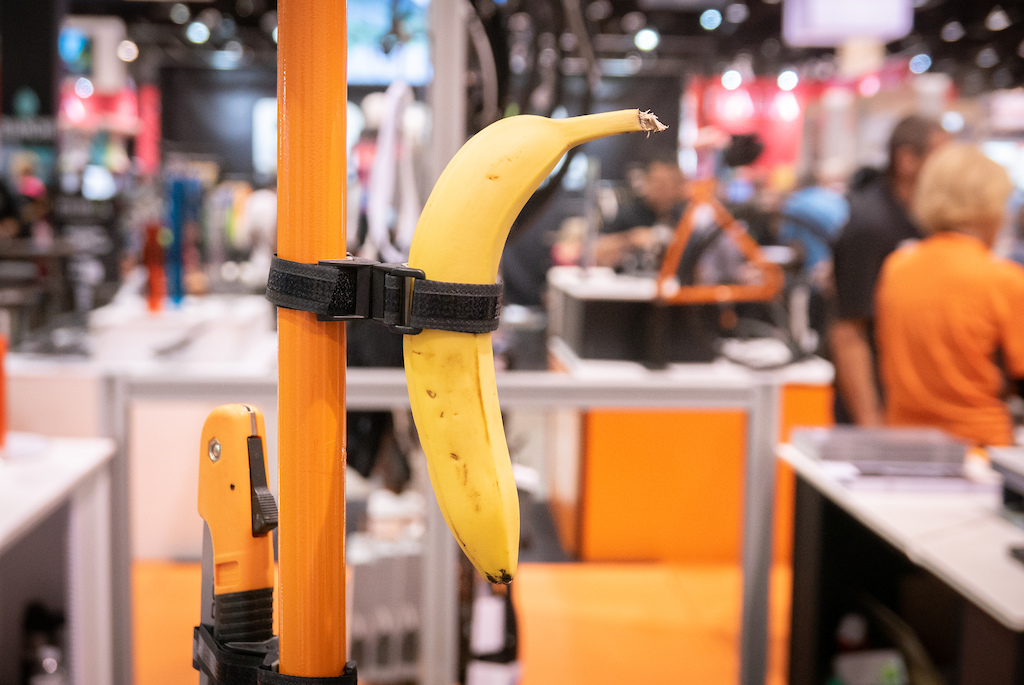 Not sure how to mount your enduro banana? SKS has it covered - just attach two of their Anywhere Mounts together and voila, that banana isn't going anywhere.

polarproton (Sep 18, 2018 at 21:30)
Put dried bananas in your pack, (on your bottle mount?)
And scare your friends by faking finding and eating dogshyte on the trailside. Tested on strangers as well.

(Also that sentence is weird.)

I’m going to mount that battery on my friends bike.

krashDH85 (Sep 18, 2018 at 21:22)
I loved Interbike when I had the opportunity to go.
Riding Bootleg on all the new bikes, scared for your life to go down on all the can openers. Then participating in the show, seeing mind-blowing products and the excitement of the direction the industry was going, the Zocchi girls still doing their thing, a different whiskey every day, chatting with some of your idols you watched in the videos, day drinking, night drinking, morning drinking, lots of hi-fives...sleeping outside your hotel room at the door because you couldn't work the key card...I wouldn't trade those days for anything. Not even a $2400 carbon wheelset.

washingtonoutdoorfamily (Sep 18, 2018 at 19:53)
I have an Evoc hip bag. I hate how the bladder hose doesn't run through a hole in the pouch. If you fill the bladder, and put anything inside the bag then the hose kinks over the top of the inside pouch holding the bladder. I had to cut a slit in the pouch and then press a grommet to get a straighter line for the hose. I was severely annoyed that a $110 bag was full of water with a kink in the hose because of shit design. Every time I wanted a drink I had to take the bag off to adjust the hose.

takeiteasyridehard (Sep 18, 2018 at 20:36) (Below Threshold)
I was just thinking. Anyone who is really into hip bags(aka fanny packs), needs to reconsider a lot of things. Those of you(not necessarily this guy), but you the enduro bros, just wear a fuxking camelback...for christ sake....my back is sweaty...wah wah... think of it as a multipurpose enduro spine protector...Cuz you're so gnarly...


Full disclosure...I hate trends and enduro bros yelling ews strava shit while ripping hardtail trails...and I think the late 80s and 90s already proved fanny packs are a trend and more of a fashion statement than anything.

Maybe I had too many beers tonight....I just feel like anything labeled dakine or evoc or *insert trendy name which implies I've been to hawaii or traveled* bullshit is robbing the mountain from mountain biking. Sea to summit might as well get in the game. I want the next fanny pack which doubles as an inflatable neck pillow on my first class flight to Whistler...

gooutsidetoday (Sep 18, 2018 at 21:17)
@takeiteasyridehard: I feel your rage. Your writing speaks to me. But I think you're just in a bad mood. Get some sleep

gravitysgirl (Sep 19, 2018 at 11:02)
Slug Plug with poo sticks to match?! That's not exactly a new thing, Weldtite have been doing a nice little kit for ages. You can buy it on Amazon. It even comes with a box and some rubber volcanizing solution to make sure you can do a proper job. Wow!

joolz7 (Sep 19, 2018 at 6:35)
Those nana hammocks, even have a choice of colour, red or lumo yellow! along with the black. Your banana of course care's not one jot which colour it rests blissfully in, as it watches the sun go down with shades on, sipping a margarita, as you slog the uphill. Banana's have never had it so good! apples and orange's must be besides themselves with jealousy.

atourgates (Sep 18, 2018 at 22:59)
Last I read, the InReach mini worked with Garmin wrist computers, but not the Edge bike computers.

Still true, or does the fact that they’re at Interbike mean they’ve fixed that?

The-mnt-life365 (Sep 19, 2018 at 9:34)
Honestly thank you for the banana mount.... I was growing quite tired of my bananas and sandwiches getting damaged while I attached them to numerous locations on my bike for races/epic rides!

mtbikemccoy (Sep 18, 2018 at 20:51)
@mikekazimer: No offense (lame show = lame content), but some late night drunk party action random may be your best offering from this year's IB. See if you can beat my record of 10 jager shots in one hour. I woke up with my head on the opposite side of a wall from my body. Just sayin'... It'd make a good article.

mikekazimer Mod Plus (Sep 18, 2018 at 20:54)
@nuttypoolog, the idea of taking the Hunter S. Thompson route has definitely been considered...

mtbikemccoy (Sep 18, 2018 at 21:06)
@mikekazimer: If you ever offer a paid subscription here, that content would sell a lot of subscriptions. Not sure if the loss of life would justify it though...

Side bar: still have cash in hand waiting on you to sell volumes of Movies for your Monday on DVD. Would be fun to loop on my shop DVD.

Gills (Sep 19, 2018 at 10:48)
@mikekazimer: If you do go full Hunter S. Thompson, can I borrow your credentials to go take a peek at the show? Sucks they don’t do one public day so us non industry folks can walk around.

RedBurn (Sep 19, 2018 at 0:37)
such back bags like the EVOC are interesting but I suppose there are better deals than the EVOC one: anyone knows them ? i'm interested ! thanks!

lognar (Sep 18, 2018 at 20:15)
@BaGearA: feedback makes poor quality tools. their portable stands are good, but their tools are rather shitty imo.