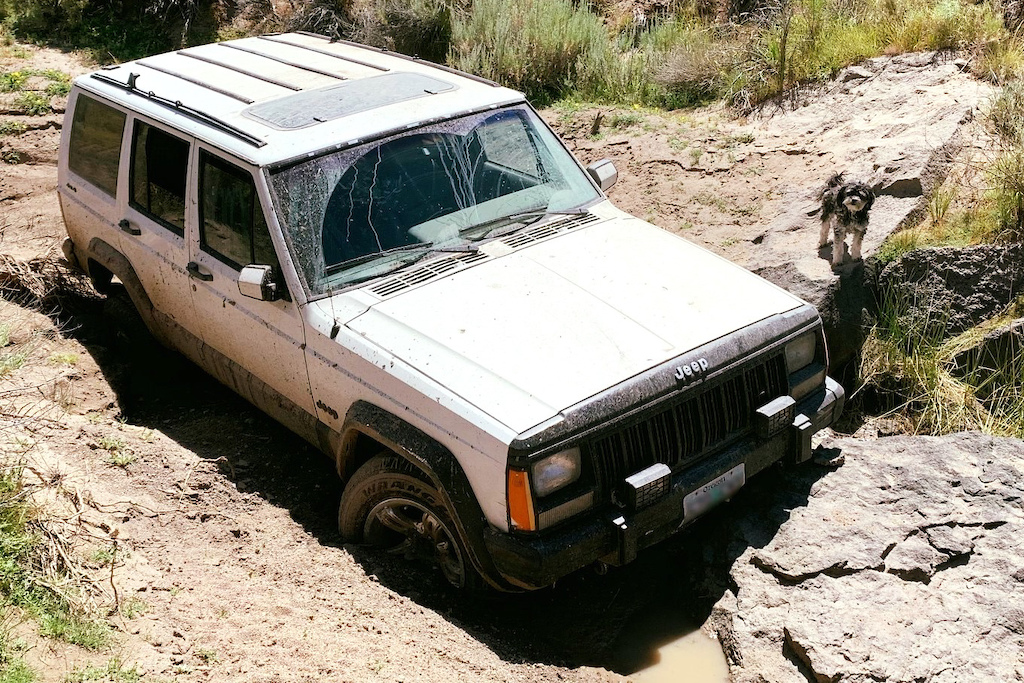 Photo: Oregon State Police Facebook
A 73-year-old man was rescued after four days in the high deserts of Oregon after a mountain biker came across him by chance.

Gary Randolph's Jeep had got stuck in a dry, narrow creek bed so he hiked about 14 miles (22.5km) looking for help when he eventually collapsed. He was barely conscious when biker Tomas Quinones found him on 18 July.

Quinones was on day six of a seven-day bike packing trip and had already seen plenty of dead cows on the route. He initially mistook Randolph for a dead cow as he saw him passed out on the trail. He said: “As I got closer, I thought, ‘that’s a funny looking cow’ and then I realised that this was a man." 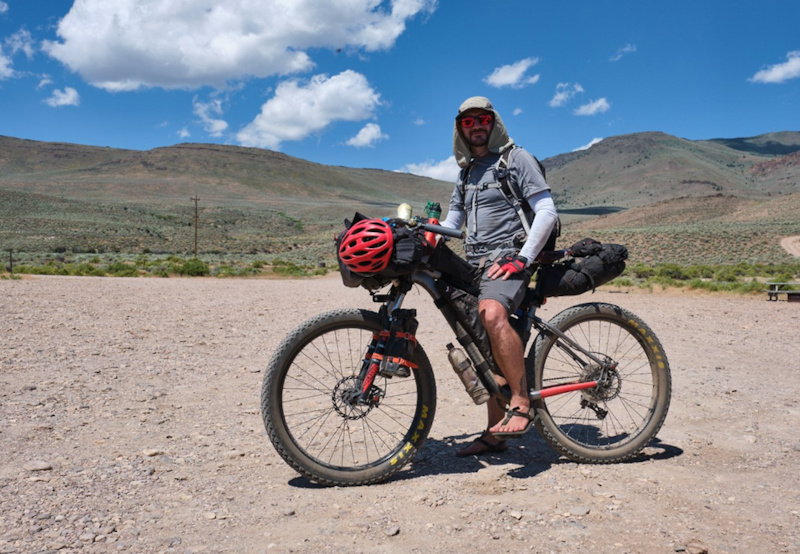 Photo: Toma Quinones' Instagram
The Guardian reports that Quinones found Randolph badly sunburnt and unable to speak or sit up and quickly set about erecting his tent to provide Randolph with some shelter. He said, "I started noticing that he sometimes would look at me but his eyes were all over the place, almost rolling into the back of his head. Once I got a better look at him, I could tell that he was in deep trouble.” He also describes trying to talk to Randolph and getting nothing but grunts in reply. Quinones had not had a cellphone signal for two days, so he pressed the “SOS” button on a GPS tracking device he travels with in case of emergency.

While waiting for the emergency services, Randolph's Shih Tzu came out of the bush and Quinones fed it peanut butter. It had stayed with Randolph for the entirety of his ordeal. After an hour the emergency services took Randolph and his dog away and Quinones carried on with his ride. An airplane was used to spot Randolph's Jeep two days later where his other dog was found, it is believed to have survived by drinking water from muddy puddles in the creek bed.

Speaking about the Jeep, Lake County Deputy Buck Maganzini said: "It’s still there. It very well could stay there forever. I don’t know how he got the Jeep in as far as he did. He was just out driving the roads. That’s kind of common out here, there’s not a heck of a lot else to do."

Quinones has finished his back-country bike trip and said he feels lucky that he found Randolph when he did and that he had a way to summon help. He later discovered it would have been a six-hour ride to the next campsite with cellphone service had he not had his GPS tracking “SOS” device. Randolph is making a full recovery in hospital.

Tomasquinones (Jul 29, 2019 at 14:52)
Thanks for the kind words, everyone! It was sheer coincidence that I found him and had the means. I have a full write up of that day on my blog adventuring.bike/2019/bikepacking-the-obc-day-6

Stay safe out there, knobby side down.

rideronthestorm1 (Jul 30, 2019 at 2:44)
Yes bet it was shihtzin good and proper after that peanut butter

jeremiahwas (Jul 29, 2019 at 11:26)
Probably not too relevant but would be cool to know which brand/model SOS device he had?

Here's his IG and info: www.instagram.com/p/B0FIRzwFdzI

cwatt (Jul 29, 2019 at 13:09)
I purchased a Garmin inReach Mini 6 m/o ago and it was the best purchase I have made in a long time. I’m told the Iridium satellite network it uses is the most comprehensive and reliable and the device can provide two-way communication with GEOS so you know your ‘SOS’ call went through (SPOT is a press-and-hope system because the beep & light only indicate the message was sent, not received).

WhatToBuy (Jul 29, 2019 at 18:10)
@cwatt: I picked up an inReach last month. Between the backpacking, biking, backcountry snowmobiling and elk hunting it seemed (finally) like a no-brainer.

cwatt (Jul 30, 2019 at 9:37)
@WhatToBuy: on Sunday a friend and I went for a leisurely ride with our single-speeds along a paved path in the mountains through a popular campground. Thing is, no cell reception in that area. Don’t let your guard down in thinking accidents or animal attacks only happen when you’re doing something risky.

connorjuliusjohnson (Jul 29, 2019 at 11:44)
Think they are Bedrocks. Pretty cool, like a cross between a flip flop and a Chaco - has Vibram soles. Very hip with the Radavist style bikepack crowd.

rocky-mtn-gman (Jul 29, 2019 at 12:10)
@ZacMD: i bought a pair and immediately returned. i just couldn't see myself wearing those shoes while at the bar ordering appletini's and petting my bichon frise, sir wagsalot.

rabbitsmokinintheferns (Jul 29, 2019 at 12:22)
We have a bomber friend on the east coast that rocks teva sandals in the woods.

Tomasquinones (Jul 29, 2019 at 14:21)
Bedrocks, Classic. Brought Xero Prio shoes with the intention of wearing when the terrain got too rough. Sadly, the shoes fell off my bike on a major descent that I was too tired to re-climb, so I just did the whole trip in the sandals. Worked great!

Please let this be a reminder to any OHV enthusiasts to never go out alone. There have been too many stories (and I've been there myself) of people going out and getting stranded. Whether it's getting lost in unfamiliar terrain, having a mechanical issue or other, having a friend around to rescue you is absolutely vital. Same can be said for MTBers venturing out on remote solo rides. A 2-way or CB radio is also a necessity on remote trails where cell phones have no signals. And of course, always have more food/water than you need in case you do get stranded. If you do have cell service, calling a tow company won't help, but you can always call the local sheriff's office and they usually are your best option at that point.

Cspringsrider (Jul 29, 2019 at 20:00)
@kabanosipyvo but ???????? where old jeeps abound and where I am at in colorado you can get a Cherokee lift out of the junkyard if you know what you are looking at. But yes you are absolutely correct a shovel high-lift and straps are basics. But I doubt alot of the people I see on the trail here where I am would know hot to use them on their $55,000. Rubicon lol

T-woot (Jul 29, 2019 at 11:37)
Great short read. Awesome when people can lean on each other in the worst times by chance. Also interested in the SOS device. Was considering one a few weeks back when a customer told me he carried one. Will be looking into them more now.

PAmtbiker (Jul 29, 2019 at 15:34)
I carry one even when I'm going on single-day backcountry rides. It's worth it. You can activate tracking on the SPOT so friends/significant others can see where you are. It helps my significant other not worry when my five hour ride turns into a seven hour ride because I miscalculated how fast the route would be. The peace of mind is worth the cost, but I hope to never have to hit that SOS button.

jason475 (Jul 29, 2019 at 17:12)
...his first mistake was taking a Jeep off road without a certified Jeep recovery vehicle back up plan. Like a friend with a Chevy, Toyota, or Ford truck. I am really glad this guy got rescued and I hope he is doing well. All jokes aside, shit can happens to all of us at any time.

Cspringsrider (Jul 29, 2019 at 13:10)
@PinkStatus. They totally are you rarely use them if you can drive well but even a $400 harbor freight winch needs to work only once to save a life well worth it

jeredbogli (Jul 29, 2019 at 16:14)
I've done a few week long bikepacking trips in that part of Oregon. It is not the kind of country you mess around with. We were taking a break one day and we estimated we were more than 60 miles from a paved road in any direction - big, wild and unforgiving out there.

Cspringsrider (Jul 29, 2019 at 11:38)
Glad to see him make it out. Never would have gotten stuck with a long arm lift and some 33s. I have been wheeling for years. Better to have an overbuilt truck than not. Goes to show the importance of being prepared. Have winch will get unstuck.

kabanosipyvo (Jul 29, 2019 at 19:54)
A hi-lift jack, some chain, recovery straps, clevises and a shovel are a whole lot cheaper than a lift kit and 33's or a winch. It's a simple kit that works in many situations. Just the jack and maybe a shovel would have likely been enough for him to get unstuck.

georgiamtbiker (Jul 29, 2019 at 22:09)
But how is that relevant when you have a catastrophic engine mechanical or other issue that immobilizes you? The take away here is more tell people where your going. Take some sort of tracking device, cb radio, HAM radio, inreach device, or travel with other people. At minimum if your going to travel in the back country you need supplies to hold you over until you can hike your ass out or somebody comes looking for you.

cthorpe (Jul 29, 2019 at 12:43)
Guy is lucky he was found and didn't wander and collapse elsewhere. From the sound of it, even another 20ft away and he may have surely been mistaken for a dead cow and never saved. Feel bad for the dogs too. The fool nearly got them killed as well. Its not horrible to go overlanding alone as long as you are prepared and know where to draw the line on taking risks. Judging by the photo of the jeep, this man was NOT prepared at all and looked to be attempting to cross obstacles that jeep is not up to the task of.

Foes2001 (Jul 29, 2019 at 22:02)
when the situation arise that u have no stuff to hook the winch well use a long thick metal rod and ram it in the ground somewhere solid to plant with a sledge hammer then hook it up

Tomasquinones (Jul 29, 2019 at 14:42)
@endlessblockades: I used to have a Santa Crus Chameleon, but didn't like the way it handled when loaded up. And the way the cables ran under the top tube made it difficult for a frame bag. Great bike, but I prefer the plus size tires for the rugged terrain.

makkelijk (Jul 29, 2019 at 12:09)
Glad he wasn't found by a road biker. Would've stolen his belongings and shaven his legs before leaving him to die.

Cspringsrider (Jul 29, 2019 at 12:36)
@endlessblockades. They cant help it ignorance is bliss...i have been stranded in co before never any fun.

onemind123 (Jul 29, 2019 at 19:14)
@endlessblockades: man does that sos device have a huge amount of hate/negative reviews online. For a second I thought I was reading reviews of sick bikes.

Honda750 (Jul 29, 2019 at 22:50)
@onemind123: no kidding, I was close to buying one, and there’s either s very motivated group of haters or that thing is a scary piece of crap combined with questionable billing practices.

orcrash (Jul 29, 2019 at 11:33)
This is old news in Oregon but glad this story made to Pinkbike. The area of the state that this guy was out for an adventure is very isolated.

onetrykid (Jul 29, 2019 at 16:41)
I'd imagine things like these would be more common once it's more common to take e-bikes into long adventures.

Chuckolicious (Jul 29, 2019 at 19:09)
It’s officially called the Outback and it very much resembles that from downunder.

Dont get me wrong i love jeeps, but it's still the worst model jeep ever made

On Tuesday, Sept. 5, Gregory T. Randolph was indicted by a Lake County Grand Jury on six counts.
Count one was for unlawful use of a weapon.
Count two was for assault in the fourth degree.
Count three was for strangulation.
Counts four, five and six were for menacing.