Join Pinkbike  Login
In recent years the mountain bike world has been flooded with a stream of media companies, photographers and videographers. As consumers of content, we now have access to amazing images and edits with but a few clicks. The flip-side to the availability of these images is that they become disposable due to the huge amount of content hurtling through cables the world over. We expect to see amazing images as soon as a race is done, but rarely do we think about the time and effort that goes into creating these images.


Over the last 18 months, Laurence Crossman-Emms has broken cover as one of the UK’s brightest young talents on the MTB circuit. With a raft of POD and VOD’s to his name and the ability to create stunning photo and video, Laurence spent 2012 with his photography as a side job, something to fit around the 9-5.


However, towards the tail end of the year Laurence found himself with an offer on the table that would help him make the leap from part-time tog to official photographer for a factory World Cup team with Madison Saracen. As one of the UK’s most prolific race teams with a strong team roster that boasts World Championship medals as well as World Cup and National titles amongst its accolades, the job gives a great opportunity for an up and coming photographer to really make their mark.


The World Cup season rolled into Fort William with great weather coming as a relief to riders and photographers alike : sitting on an exposed Scottish mountain in the wind and rain with no shelter is hardly up there on most people's wish list.


There are a whole host of photographers at a World Cup, from official team guys, through to freelancers, enthusiasts and regular Joe public. Getting “the” shot can be hard when everyone is jostling for a prime spot near a feature. Sometimes you need to take a wander and find an alternative.

Travel the world, take some photos, sounds like a tough job, right?

So, I hope you don't like sleeping too much... It was 7am and Laurence was already in the media tent checking off what needs to be done on that day... A quick browse of Pinkbike, a couple of emails, look through Facebook and... he's ready to go!

Meanwhile, Keith Valentine, a photographer also known as Phunkt showed up in the tent. The guys had a small talk and exchanged their experiences from the previous day on Ben Nevis' mountain range.

Colin Meagher carefully checks off who he can not miss whilst taking photos on that day.

Ale Di Lullo sipping his early morning coffee to have enough energy for the whole day...

It's not just a case of turning up on race day and shooting , the riders and team need to be happy with you sticking a lens in their face at moments of both ecstasy and agony, so a strong relationship with team riders and staff alike is a must.

Keeping your client happy is a must when it comes to delivering the goods. From liaising with the Team Manager, to the Saracen Marketing guys, there are a lot of balls to juggle and a lot of opinions flying around, but mainly a lot of people that are stoked on some great images.

However, the whole team has got their own duties and tasks to do and these have to be done no matter what. Being focused and on time with the schedule is a very important thing when working at the World Cup team.


What I'd like you to understand is that taking a single photo is just a matter of 1/1000th of a second on average, but sometimes it takes many long hours or even days to struck the gold! Here's a breakdown and shortened recipe of how to take a good photo. 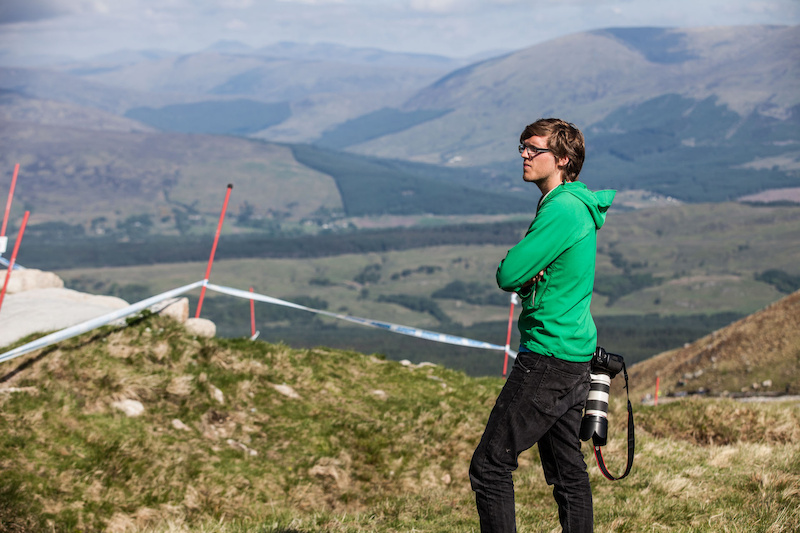 Being part of the team set up also means chipping in and helping to make the day run smoothly. From putting up the pits to helping the mechanics carry spares up and down the hill. Just don’t expect riders to help you lug your camera gear up the hill in return!


The media tent at a World Cup is a hive of activity, with competing media outlets all trying to get their coverage out to a demanding and expectant audience.


Short stay in the pits area...


... only means that it's time to walk up to the lower part of the course.

The sun may have been shining, but that doesn’t mean anything on a Scottish mountainside. There’s still plenty of moisture around to make your day more interesting and make the thought of a clean pair of socks is a pretty exciting prospect


Laurence doesn't like to stay for too long in one place... Why? It's important to stay mobile and use as many unique angles during the photoshoot as possible. It's a must to be creative at all times, if you want to compete with the best ones in the game. It won't be easy, because photos have been taken at this particular stage for many years now, but not impossible and that is what makes it worthwhile.

Finally, he could put the camera down and grab a bike himself! It's not 100% hard work, as the occasional moment of downtime does rear its head every now and again! Taking advantage of the Shimano airbag in the middle of Fort William seems like an ideal reward after a hard day on the mountain.

It may involve long days and even longer evenings, but it's all part of the territory and who wouldn’t want to put in the hard graft when you get to take a seat track side with the best racers in the World, week in, week out, at the best courses in the world.

It’s a tough job, but someone’s got to do it!


PS. Please, don't forget there had to be a photographer to follow this photographer, if you know what I mean...

Smelly888 (Jul 26, 2013 at 1:14)
Good article, much more interesting to see behind the scenes of various aspects of the world cup than endless stupid debates on wheel size!

KleinGuyGA (Jul 26, 2013 at 6:29)
Awesome writeup. Totally understandable. My Dad was a photographer for the Associated Press (retired now). His hours were crazy and its hard to fathom what it takes to get even some simple photos we just scan through in the news etc on a daily basis. Big props to all photographers. What really sucked were the days before digital cameras. I remember helping my dad pack up a van full of chemicals and darkroom equipment so they could process the photos on site at events, ha

jamespinderMTB (Jul 26, 2013 at 2:27)
defiantly one of the best mountain bike or action sports photographers there is .....real good article nice to read about the people behind the lens especially as a young photographer, although im getting jealous of there lenses

cherouvim (Jul 26, 2013 at 0:51)
Superb article. Noob question: Why do you have to "Check, save or delete"? Since you've got all that storage in the camera, isn't it easier to just keep shooting and simply pick the good ones when you are on a laptop with a good HD display?

rayy (Jul 26, 2013 at 1:14)
Less work for later (when time should be spent editing, not deleting pictures). Time spent editing is precious time..

Loam9 (Jul 26, 2013 at 1:19)
There are some photos that you can see on the back of the camera, that really aren't worth keeping to look at on a bigger screen, and it saves a lot of time, especially when you're low on time

betsie (Jul 27, 2013 at 0:25)
Nice article Surprised he is only using a 7D, changing to a 5Dmk3 if the money is there would make the world of difference with changing nothing in his shooting style. I have 7d, and I know a few who upgraded and the difference in iq is staggering over night. Shame I take the wifes sony rx100 out all the time instead now!

LeadMedia (Jul 26, 2013 at 12:44)
Awesome, great piece. It's always interesting for the audience to learn how these amazing and compelling images are produced.

I really love your pics!

I actually appreciated the hell out of this article. It really brings the amount of work put in by the photographers, who make the site that we all love to cruise through and follow into perspective. The beginning statements hits the nail on the head. What if you logged onto Pinkbike on the day of a significant bike event and there was nothing to read or see? You probably would be upset with everyone for not having pictures for your lazy ass to look at. Show some respect to the people who actually make coming to Pinkbike worth while, and quit being such an ignorant prick.

Edit: @dhftw1231, sorry that was not directed at you. When I commented your comment was not there.

And please don't be that cliche kid that says "I worked my ass off for what I have".... You're not fooling anyone, we all know you didn't