Chris Kovarik with Summer of Summit

Whenever we think of racing or mountain biking in general there are always a couple of guys who just stand out. Chris Kovarik was winning races in 1998, and has been doing so ever since. Over his long cycling career he's been the Australian Nation champ numerous times, has won World Cups and still holds the record for the largest winning margin in UCI DH history. (winning by over 14 seconds in 2002 on the Fort William DH track...Gnarly much?)

As of the 2011 season Chris and his wife Claire have added a new title to their cycling repertoire, Coach. Kovarik Racing is a way for the Kovarik's to pass on their knowledge of riding, racing, and of the cycling world that they've accumulated over the years. They provide private and semi-private coaching sessions which are tailored to each rider's needs as well as other options. Working out of Whistler, BC May through October and Australia (Gold Coast-Brisbane-Sunshine Coast areas) November through April really makes their program one of the more unique couching opportunities out there.

While most of us are are in the middle of an inevitable off season these two are in Australia hard at work, training, racing and coaching. 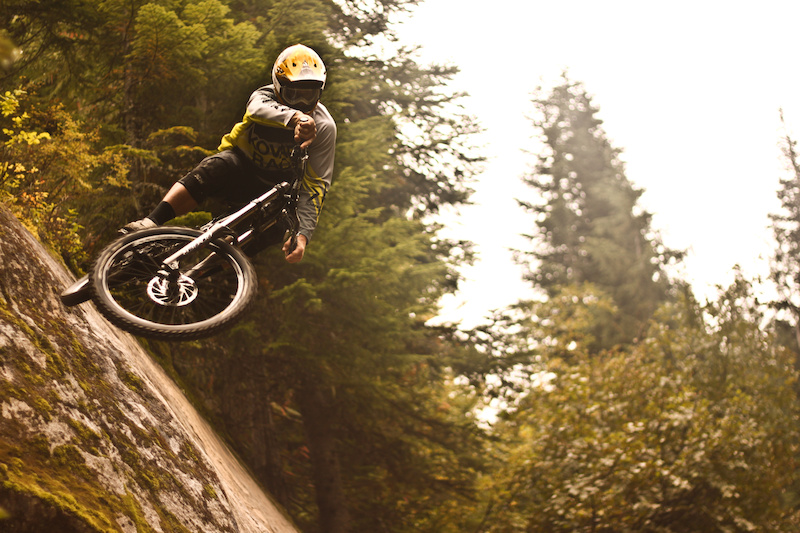 Even though Chris' schedule was pretty much booked all season we managed to swing a couple of clear days to break out the camera gear and do a little shooting. The Summer of Summit crew was more then happy to tear it up with the karver and put together a short video of some 100% shred!

The Kovariks have their 2012 season already lined up and booked! There is lots more racing and coaching to come from these two including the UCI World Camps in Austria!

Cmontjumper (Dec 6, 2011 at 6:24)
i think you responded to the wrong post lol. or the message was deleted haha

rigodon777 (Dec 7, 2011 at 16:34)
Rode every trail he did during the video, and i'm not shy to say I was around half of speed. GOD DAMN! You guys don't realize that transfer from b-line to schleyer is SKETCHY as hell. I was with mitch gulliver and he was talking about hitting it, we scoped it out and NEVER was I going to hit that!

Samparry (Dec 9, 2011 at 16:48)
Amazing video! Also, Whistler noob here. but what time in the video is this transfer you guys are talking about?

Downhill-Disaster (Dec 6, 2011 at 0:23)
Kovaric and Lamb of God together is too good to be true! Some amazing riding. Most ppl can't drift that well on motorized vehicles.

cougar797 (Dec 6, 2011 at 8:00)
sorry, just got finished listening to that song. Redneck sorry. Its been one of those mornings. God that's embarrassing.

cougar797 (Dec 7, 2011 at 14:22)
I know, that was a rough morning and I had just finished listening to "In your words" when I was typing the comment. I offer my most sincere apologies and return the props to you.

hollowing2000 (Dec 6, 2011 at 1:32)
When i think of Kovarik, another name comes into mind - Vories... i think both of them have very fluid styles of riding but Kovarik has a tad more speed i think

brad79 (Dec 6, 2011 at 15:42)
Sooooooo, I loved this edit and I think Kovarik is the man. He has been shredding for years and is always fun to watch. My problem with this video (and I am sure I am going to get all sorts of neg props for this) is the music. I do not have anything against metal, but I really have a problem when the language used in the music is so graphic that it prevents me form being able to watch these vids with my 5 year old son. I know I sound like an old stick in the mud, but maybe there should be some type of parental warning when the edits contain sound tracks that are not suitable for young kids? Thoughts????

bigburd (Dec 7, 2011 at 8:52)
Well swearing is nothing new in videos in pink bike , a third of the edits out there have rap with heavy swearing and racist words through out , if I was gonna show my 5 y/o kid a video on here I would watch it 1st.
But yeah a little warning of foul language on front page vids would not be out of place.

brad79 (Dec 17, 2011 at 10:35)
Thanks for the words of wisdom guys, never would have thought of either one of those suggestions! The point I was trying to make was that some type of rating system would be an asset so I don't have to pre screen media that I really shouldn't have to worry about. Why is it neccessary to foul an otherwise wholesome (relatively) pass time with music that contains more profanity than a gangster movie anyway?

woollahra (Dec 6, 2011 at 0:31)
Hows that drift and that triple on original sin , man oh fing man ! His section in super8 still to this day is my favourite section on film ever . I scored a ti spring of the guy the other day , Legend !!!!

kram (Dec 6, 2011 at 12:11)
Do you mean the triple over the rocks on No Joke, after the close up drift? Amazing. I hate that I always slow down there so that I don't over clear the first landing, but it would be so much better to pick up the pace and hit the second landing like that. I'm afraid of the speed that you would have charging into the next corner more than anything, but as usual Kovarik makes it look easy.

drbong-mrhash (Dec 11, 2011 at 11:29)
i wouldnt say that slow mo and tech sucks, id ust say there should be a healthyer blend of more fast past and burly riding with the medal music pumping

euan-thomson (Dec 6, 2011 at 5:43)
nothing has made me want to go back to riding flat pedals on my dh bike more than watching that video.

MarkSteffens (Dec 6, 2011 at 5:47)
Did some mellow laps with Chris this year in Whistler, I think it takes a stopwatch or a video camera for him to unleash! Sick video, great guy.

cunharider (Dec 6, 2011 at 14:13)
so nice films where all the people riding and training hard and me at home looking to my bike waiting for the full heal of my arm....... SHITTTTT

portable (Dec 6, 2011 at 18:46)
I want to book some coaching for next year, as a flat pedal rider, dont think there would be any better Pro to pick up some pointers..

bigburd (Dec 7, 2011 at 8:56)
Yeah most in vids of whistler the riders appear to be cruising at speed if you know what I mean ? He's actually hurting the tracks he's riding so fast

flatlandgod (Dec 6, 2011 at 19:17)
About time they started putting some good music in videos!!! Awesome riding

lightningskull (Dec 8, 2011 at 18:20)
I had to watch it twice to be sure it was real. Solid riding style, talk about pinned and fully committed.

bawzofsteel (Dec 6, 2011 at 13:59)
"that music is for when u want to slit your wrists" rhiwfawrdirt, you're a roady, your argument is invalid. Epic video. Epic tune.
Post a Comment