DH1 Series will start in Maribor!

Join Pinkbike  Login
Pinkbike has been in touch with the guys at Freecaster about the DH1 series for a while now, and we're stoked to announce that the first date and location has been announced. The first event of the DH1 series will take place in Maribor, Slovenia on May 12-13, 2012. Maribor has been a very popular venue on the World Cup circuit in the past, the last UCI race there was in 2010. You can see our report on that event here. 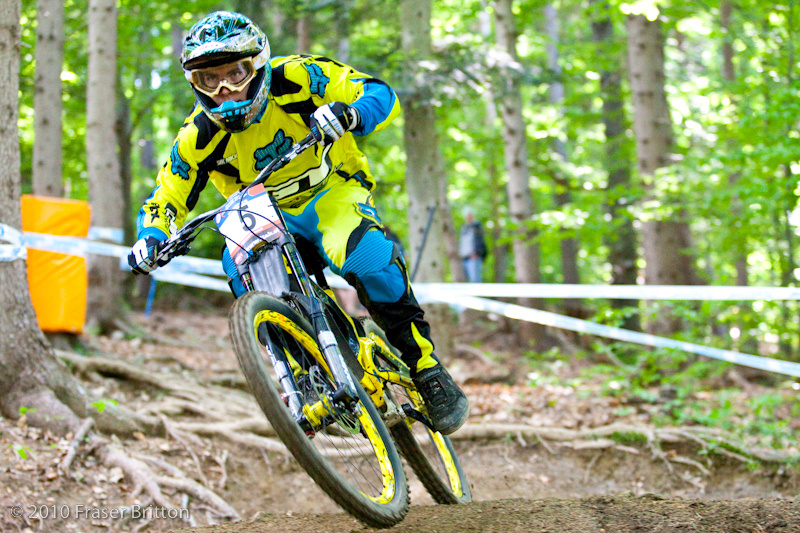 Mick Hannah races at Maribor in 2010

The Freecaster DH1 Series
For those of you that haven't really been paying attention so far the Freecaster DH1 Series will consist of 6 Pro races that will run in sync with the UCI World Cup dates, so that riders can compete in both. The races will be filmed in HD and broadcast live on Freecaster.tv with the usual commentary by Rob Warner. This is awesome news for those of you that were worried about not getting your Sunday morning Warner fix. The races will feature men's and women's categories and will be open to a minimum of 150 riders. Saturday's will see a qualifying round with a Small Final of 30 riders and a Pro Final of 30 riders as well. The top 20 Pros will be protected, leaving 10 spaces for other riders to move into the Pro Final. The series overall will be based on the best 5 out 6 results, allowing riders to miss one of the events with taking a loss in the points.

So far support for the series has been good, with the CG Brigade, Santa Cruz Syndicate, Kovarik Racing, and Scott11 all committing to the series already. More teams are sure to commit once the schedule becomes a little more solid.

- Open to men and women
- Qualifying open for 150+ entrants
- 30 Riders in Small Final & 30 Riders in Pro Final
- Top 20 Pros protected for Pro Final
- Gap between Top 20 riders will be enough to show all of each run
- Participation required in all events to qualify for final ranking prize money
- 5 race results count, allowing teams to miss 1/6 races

DH1 promises to release a new date and venue for every 10,000 fans they get on their facebook page, so be sure to go there and hit the "like" button. They've already posted the dates of the next race on their calendar, May 19th and 20th.

For more info check out the DH1 Website here

Here is a video from the 2010 World Cup in Maribor.

Protour (Oct 22, 2011 at 14:47)
Not unless they improve the format. Many teams will not bother to go if they are only letting 20 pros in the final. I imagine alot of racers will show up at the first races then skip the rest once they realize it is a waste of their money because they have such a slim chance of qualifying. Why travel to a race when there is such a slim chance of being in the final. Local pros close to the venues will go, and a few big teams like Santa Cruz will be there, but Freecaster doesn't stand a chance competing with the World Cup if they stick with this formula. They are thinking too much about the viewers and not enough about the racers.

and what would downhill be without its faithful viewers ey?

Protour (Oct 22, 2011 at 19:57)
Hope I'm wrong. If most of the fastest guys are there for most of the races, it's gonna be great. Giving amateurs a chance to compete is cool, gives the young juniors a chance, and the local pro who might have the course dialed.

bikounet (Oct 22, 2011 at 4:34)
Does anyone know how will be the non-pro riders selected? It could be fun to take part to one of those races

swearmouth (Oct 21, 2011 at 14:43)
Funny how that`s quite similar to the way they ran our high school XC races haha. looks sick though, and hopefully this series really takes off. Mountain biking needs a move away from the UCI really badly at this point.

They`ve taken 4X out of the world cup schedule altogether this year, citing rather crap reasons such as ``environmental damage``, they asked freecaster for triple the amount of money they paid last year in order to continue broadcasting, and they have a new title sponsor, www.rockyroadsnetwork.com , a website that no one has ever heard of, and claims to get 200,000+ page views per month, even though no page view trackers have any proof of this whatsoever.

swearmouth (Oct 21, 2011 at 17:25)
To the people negative propping Spec-Rider, how is it his fault for not knowing something? While it has been high profile news, that doesn`t mean everyone is going to be familiar with the situation.

swearmouth (Oct 21, 2011 at 18:44)
They have no source to support the claim that they even get that many hits, thats what I was trying to say. and when you look at their site its not very well done to be honest.

nouser (Oct 22, 2011 at 3:49)
I honestly think that the uci world cup wont be half as popular, they really didnt know what they were doing not letting freecaster film the race, I mean the main reason i watch DH races is because of Rob warner

swan3609 (Oct 21, 2011 at 17:45)
Awesome job on getting set up, and taking the steps to getting rid of the UCI and its BS..
But only 10 open qualifying spots at each race? That doesnt leave alot of room for random new kids to rise up if they are having a killer weekend.. I would like to see a 20/20 or even 10protected and 30 split so that there is a better chance for the weekend warrior or young unsupported guys to get a spot on the line on Sunday.. Think about it.. if all the WC teams show up from all the different companies, then you are going to be looking at 20+ crazy fast guys that are on full factory support teams.. doesnt leave alot of room for the locals or small guys to get a shot at the Sunday race..

It is to support factory riders who want more races. Not for Johnny Whoever to put in a 30+ seconds back run on a WC track.
Sure there will be fast riders on track apart from the usual suspects, but the series is not about them. However, they have alocated space wheres they didn't have to at all.

I would prefer to watch the pro's ride than any 'weekend warrior' like my self.

swan3609 (Oct 21, 2011 at 19:17)
Thats all fine and well.. but If someone is a factory rider, then they should be able to quilify faster then the weekend racers anyways.. I say that they should keep the top 10 protected and then give the rest a shot to ride with the big boys.. and at any given race, you are going to have 40 guys that could pull out a fast run and win.. I am all for making pro riders earn the right to ride on sunday..

wesdadude (Oct 21, 2011 at 19:35)
It says 30 riders in a small final and 30 riders in a pro final. I assume that means there's a totally different category for amateurs and then 20 of the spots in the pro final are protected.

neimbc (Oct 21, 2011 at 17:58)
Freecaster is now Extreme.com - Only 30 guys in the finals? That makes for quick viewing! And discourages others who would other wise race, but won't bother because they are not top 30 material. I enjoy seeing the 80 on down and watching the lesser known and the other hopeful wannabe's let it all hang out. But I understand, understandably, not all the pros will be doing this event, for fear of crashing out and missing the UCI events, being over worked/run down from the travel/practice. In reality, only one series can truly exist. I know Santa Cruz signed on to this, but I don't think many other teams will, or they'll use this as a "development" league for polishing new talent.

But you got to love Warner! Without his enthusiasm, and off-the-cuff zingers it's just not the same. So Rob, if you want a writer to keep you fresh - I'm available.

ivcrider (Oct 21, 2011 at 18:19)
I think the idea behind having just 30 guys in the finals is so that Freecaster can cover the runs nearly top to bottom instead of the 4-5 camera locations that we'd see at a WC race. Good thing in my mind. At least that seems to be the idea from what I've read. Really excited to see how this new series turns out!

Kenji-n-d-hills (Oct 22, 2011 at 14:56)
Am I the only one who noticed that is says that the points will be taken from 5 of the 6 races to determine the overall winner, giving the teams a chance to miss a race for rest/whatever but that you must compete in all events to qualify for the overall winning prize money? That doesn't make much sense.

Protour (Oct 23, 2011 at 9:53)
Really doesn't make any sense at all, I agree. What if Minnar won 5 of the 6 races, including the final, but had to miss one race because of an injury or something? He wouldn't be the DH1 champion? That would be really embarrassing for everyone involved.

dingus (Oct 21, 2011 at 15:53)
I really hope this is as good as it has the potential to be. But with Warner behind the mic I'm sure it will be entertaining either way!

How much will the pay per view cost? Since Freecaster no longer has the support of the UCI, how will they pay for all the expense of putting on these races? except by charging us viewers. I seem to remember that when they were charging 2 euros per event , everyone was up in arms. Without the support of the teams ie: input of cash, freecaster was going BUST.

When WILL the full calendar be released? one confirmed location and the rest TBA?

DTDUNCAN (Oct 21, 2011 at 15:45)
If im right, the races will take place on the same wekend as the UCI events meaning teams can compete in both?? Realistically, how many riders will be able to compete in 2 events each weekend at a world cup level?? Sounds a bit far fetched to me...

cGonzalez (Oct 21, 2011 at 16:25)
no the races are on different weekends than the world cups, allowing teams to compete in both the world cup and DH1 events if they want

anthonytutor (Oct 21, 2011 at 16:28)
Who's commentary on the normal UCI. World cup now? No ones gonna watch if warners not behind the mic

hoolydooly (Oct 21, 2011 at 17:47)
YEWWWWW! give it a few years and DH1 will be so much bigger than the UCI World Cup ever was. And that prize money is going to attract a lot of big name racers!

Protour (Oct 23, 2011 at 9:58)
Yeah, it seems like they are ignoring the girls, too bad. But I guess they figure not many would watch it, but not giving the girls a chance will limit its potential as an alternative to the World Cup.