Join Pinkbike  Login
Learning languages in India is a tricky proposition. Pick up some Hindi and you'll likely only share it with someone who’s English is way better than your Hindi. Pick up a local language and bets are it'll be useless in your next locale. No matter where you ride in India though, the people serve 'chai' and the kids shout 'cycle' - universal vocabulary and the purest of elements. 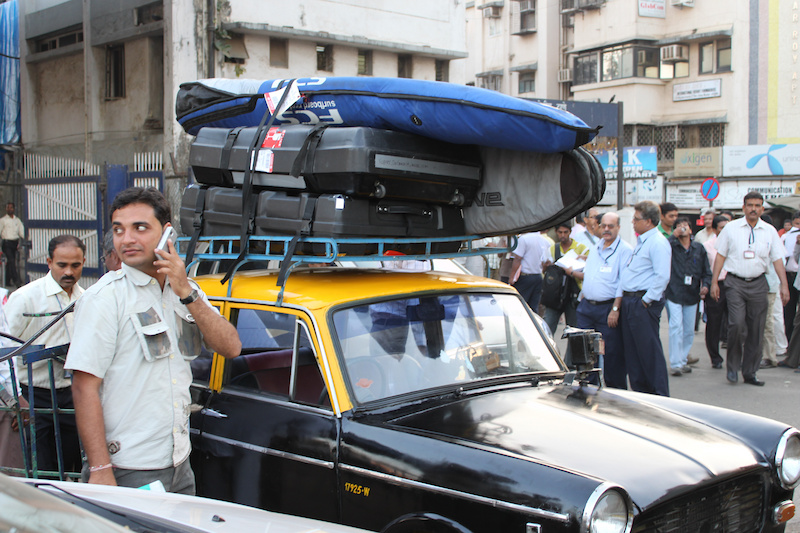 Several hours of stiff negotiations with customs officials and our precious cargo was back in our possession.

I made this observation after making good climbing pace for a few hours in Kerala and before dropping over the pass into Tamil Nadu. Note that ‘good pace’ is easy to maintain when your riding partners are your wife and your guide; neither of whom can contractually drop you until death. After picking up a few phrases in Kerala to greet locals while navigating through tea plantations and villages, I was amused to learn these phrases would now be useless on our 1700m off-the-grid descent into Tamil Nadu. That’s right – 1700m! 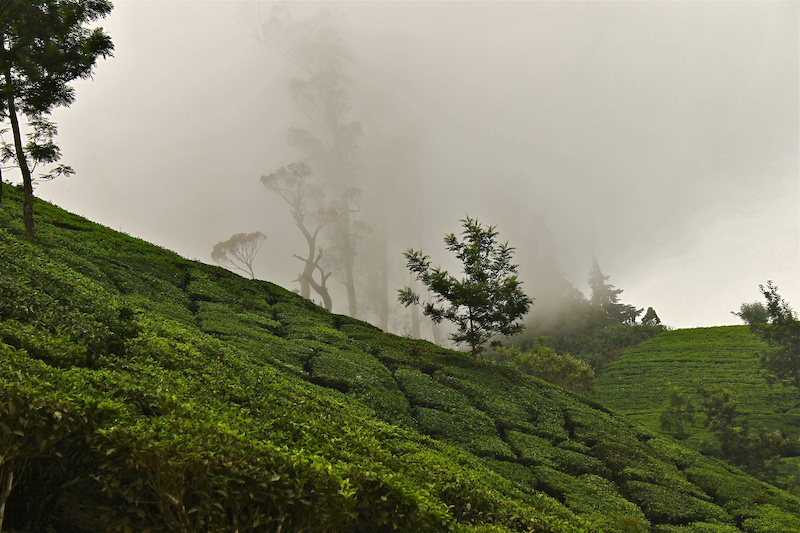 Mist blowing through the pass dividing the states of Kerala and Tamil Nadu.

The Top Station descent was day 3 of our 4 day Kerala bike trip. The state border between Kerala and Tamil Nadu, high in the Western Ghats, forms an impressive divide in the south of India. Our descent followed an old tea trade route from Top Station to Central Station and down to the plains at the base. These stations were established by the British over 100 years ago. Today, modern transport takes care of the tea, but the retired route still has its uses. Locals trek the route barefoot moving a precious few goats to market or carrying goods in woven baskets perched on their heads. For a few fortunate aliens on this particular day, clad in space-aged polymers and equipped with 160mm of travel, the old route made for one hell of a descent. So, with our egos humbled and souls warmed with 5 rupee chai, a few hours of smooth climbing behind us, and a van waiting somewhere at the bottom, we dropped in.

You only get to do something for the first time once. When that first time may also be your last, there is nothing but the present – a fitting mindset given our spiritually renowned locale. Dropping in, with our guide graciously offering me first line and with locals’ heads bobbling in bewilderment, we chewed through a few hundred vert of high speed, freshly churned, earthy doubletrack. The drifty goodness came to a halt when we met a big excavator, the culprit behind all that fresh red earth. I was stoked, as the ruts and divots left behind made for impromptu berms and transfers and the loose dirt made for drifty corners. When our guide, Mike pulled up however, he was less impressed. Apparently the freshness that had me grinning was previously and until now a century old flowing singletrack; a casualty in the wake of a country seeking progress. Naivety is bliss however, and there was no dousing my buzz. After figuring the new route would contour off of his favourite descent, Mike swallowed his frustration and let the party continue. Picking our way around the big ho, we started into what I realized Mike was missing: singletrack. 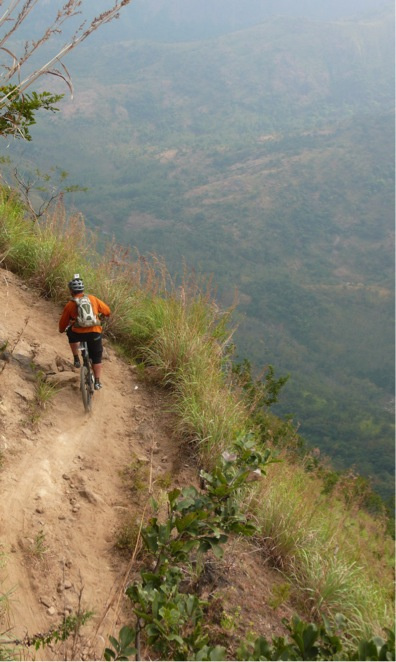 5,500' vert revealing itself one corner at a time.
This wasn’t singletrack hand-crafted by hermit builders in the BC backcountry riddled with duffy berms, floaters, gaps, and wallrides. This was dirt, vert, rock, and corners of the pre-mountain biking, organic form; an unraveling ribbon of shred revealing itself one sightline at a time. Sections varied between buffed hardpack strewn with firmly planted rocks and outcroppings, off-camber sandy singletrack, cobbled doubletrack, eroded bobsled dirt chutes, and corner after corner of switchbacks. Each section made for choose-your-own-adventure line selections and while some corners were perfectly natural berms, others were barely-makable ledgy rock gardens. Every bit was fueled with just the right amount of gravity: a bit of pedaling to get on the gas, a bit of braking for the tech sections and corners, and a whole lot of flowy freewheeling in between. 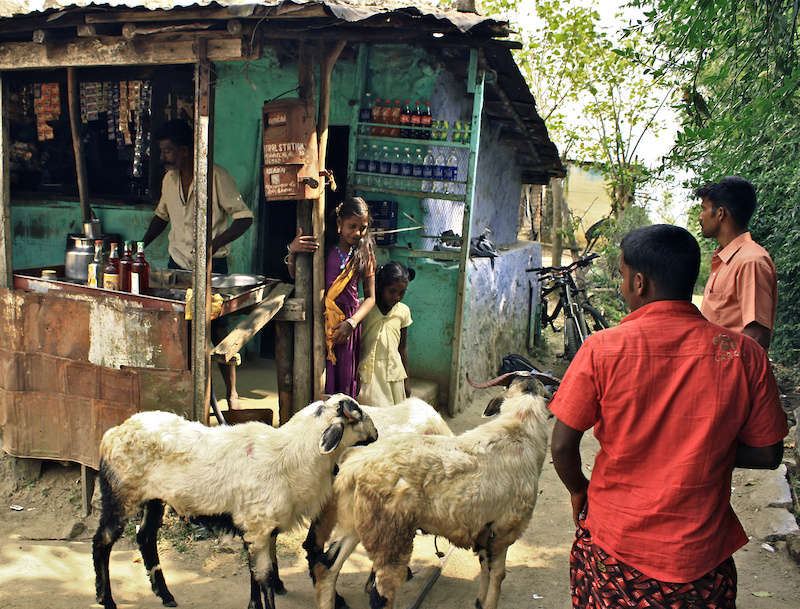 High Tea. India is buzzing with activity. No matter how far we felt from anywhere, there was always company and a hot cup of chai.

Whenever we let off the throttle long enough to pop our shred bubble, we realized we were earning our grins amongst an unreal, foreign backdrop. Looking back and up revealed a jungle protruded by sheer cliffs guarding the pass from where we began, while far below a patchwork of crops spotted with palm trees stretched across the flat plain to a hazy horizon.

And so it went for thousands of vert, with the plains drawing closer and the temperature rising with every switchback. Riding blind and leaving it behind, we opened it up on the flowy sections and laughed as we got shut-down on bad lines into close-out rock gardens, just to hike back up for the doable line, while sharing more smiles and head bobbles with passing locals, baffled, but friendly.

Nearing the bottom, 20 degrees warmer, we pit-stopped by a waterfall. A waterfall worthy of coin-operated binoculars and tacky gift shops, but instead flowing alone and unbothered, as it should. From there, we devoured the final bit of vert, picking off the last few natural gaps and roosts as they came and went. After a few hours of solid descending, a half hour freewheel on smooth asphalt was the perfect chance to take it all in. Seated upright in the ‘look-ma-no-hands’ position, we glided through the hot air and digested our 5500’ meal. 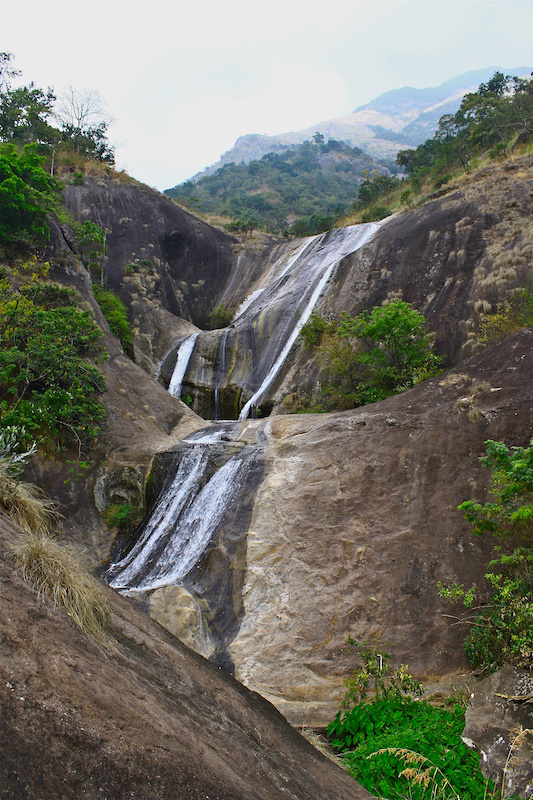 Where's the coin operated binoculars?
Cell phones working of course, we rendezvoused with our van and driver amidst a rather desperate looking village and notably didn’t crack a cold beer, but it is difficult to complain about lack of refrigeration to locals who live without it. We stuffed some fruit into our guts and our bikes into the van and drove towards our route back up and over the pass. This road was an attraction in itself. Narrow and exposed with relentless switchbacks it reminded me of a mountain stage of Le Tour. Sketched out at times, but mostly in awe, we peered over the edges at the protruding cliffs and wondered if any of them had ever been climbed. 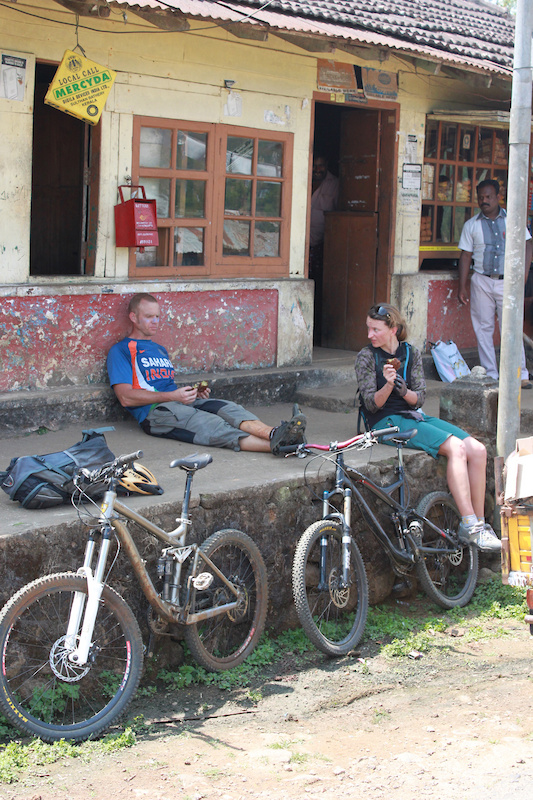 Mike and Katrina resting the legs and refueling with sweets and chai.
At the top of the pass, we stopped for more chai and then finished the journey back to our guest house high in the quiet, temperate hills of Kerala. Day three down, one more day to go, and nothing on the mind but the present – a good burn in the legs, a cold beer, a hot shower, a comfortable bed, and no alarm other than the rising sun.

Those first-and-last rides are memories to keep and cure. With 5-6 hours in the saddle each day guided through the mazes of tea plantations, villages, mountain, and forest, we got our two-wheeled fix combined with a ground-level perspective most are happy to view from a tour bus. While the Top Station descent was a highlight, the other days left equally vivid and smile-inducing memories. In fact, although not as epic, Day 4 gave Top Station a run for its money, but I can’t give it all away! Our next stop: Pindari Glacier high and remote in the Indian Himalayas, where we are certain to find more dirt, vert, and chai! 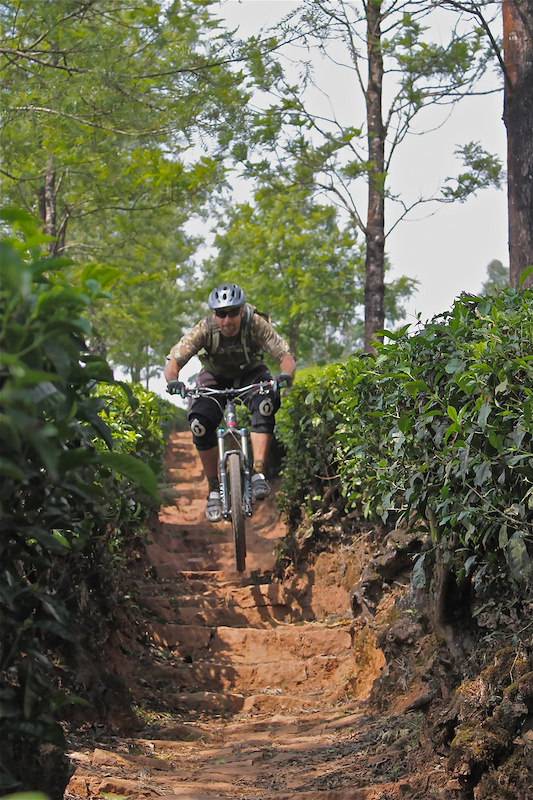 A gem of a trail ripping through the tea plantations on our 4th and final day.
For more info on mountain biking in Kerala, or to arrange your own Indian epic, visit www.mountainbikekerala.com. 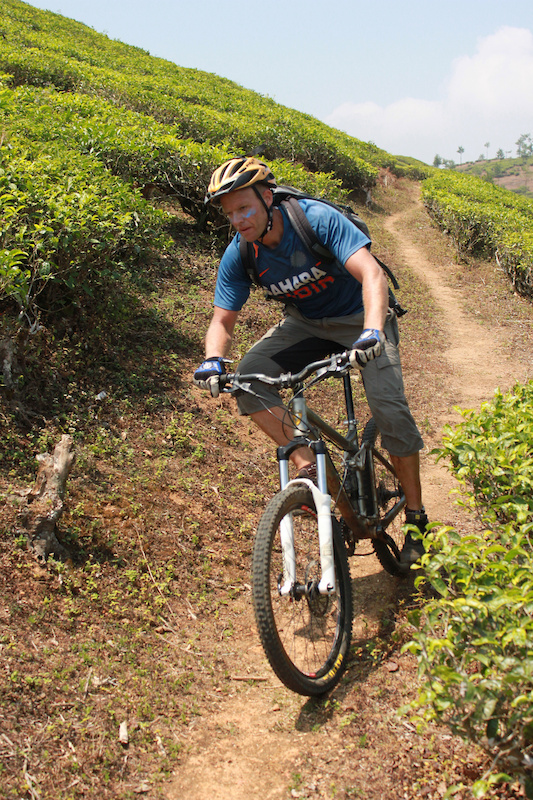 Our guide, Mike has spent a number of years scouting and connecting endless routes through Kerala and some mind-blowing routes up north in the Himalayas.

Here is a sampling of our descent from Pindari Glacier. (Totally different part of the country, but still fun):

gypsyonwheels (Sep 30, 2011 at 20:34)
They should try to have a race in here! but it will be maybe one of the most longest downhill race haha!! Whatta great place to ride!

jcinkits (Sep 30, 2011 at 13:43)
i have been to India several times [ for 'spiritual' reasons ] and recall the infamous 'copies' of mountain bikes they make and rent or sell that weighed about 45 lbs and more ! i was in Northern India in the Rajastan Thar Desert and chose to walk rather than ride one of those 'Tank Bikes' :-)
South India is by far the safer regards safe food, less virus and bacterial borne illnesses - still not a country to visit if you don't like getting ill and puking your guts out almost for CERTAIN while there...but, i suppose it is a small price to pay, depending on why you are there.

Philler (Sep 30, 2011 at 2:05)
A little Map or the Names of the Places you have been would be helpful. Kerala and Tamil Nadu are huge! The waterfall looks like a place near Munnar. Anyway nice read and pics, awesome trip.

w-e-w (Oct 1, 2011 at 3:15)
Yeah we spent 2 or 3 nights in Munnar and this day's ride started near there... Top Station is a major landmark in the area and is mentioned.. I'm not sure if there are any useful maps of the area beyond that.. hit up Mike at www.mountainbikekerala.com.. we wouldn't have found a thing without him.

marshlog (Oct 2, 2011 at 10:14)
wicked buddy! THE SHREAD LOOKS GOOD! hows the arm healing up??? i did a similar but 1st degree separation at the provincials. it sucks but shes pretty good now a few craked ribs to add to the flavor. makes da sneezes tough! haha keep up the latest and greatest out that way!!

punkaholic50 (Sep 30, 2011 at 8:43)
i recently went to nepal for 7 weeks with my family, but unfortunately we didnt know about the great mountain biking there was until we got there, so we didnt have any time to ride

bolini (Sep 30, 2011 at 7:11)
Awesome. Great to hear you guys are having fun over there, sounds pretty epic. Looking forward to seeing more reports!

leelau (Sep 30, 2011 at 7:45)
Nicely written but the windsurfer on the roofrack begs an explanation/exposition??

veggiecyclist (Oct 1, 2011 at 19:10)
I'm intrigued! I never considered India as a biking destination... I have changed my mind. Thanks for sharing your article!

Needles (Sep 30, 2011 at 5:31)
"Pick up some Hindi and you'll likely only share it with someone who’s English is way better than your Hindi."
In your case, it won't be hard to find a lot of people whose English is better than yours. I mean, seriously: WHO'S?