Many riders have legitimate claim to being the first mountain bikers, but Joe Breeze gets the nod for making the first purpose-built mountain bike. Breezer number one was being ushered into the expo area and we got some pictures of the beautifully restored machine that launched the sport. You don't have to be a vintage bike geek to appreciate the opportunity to see and touch such a relevant piece of history. 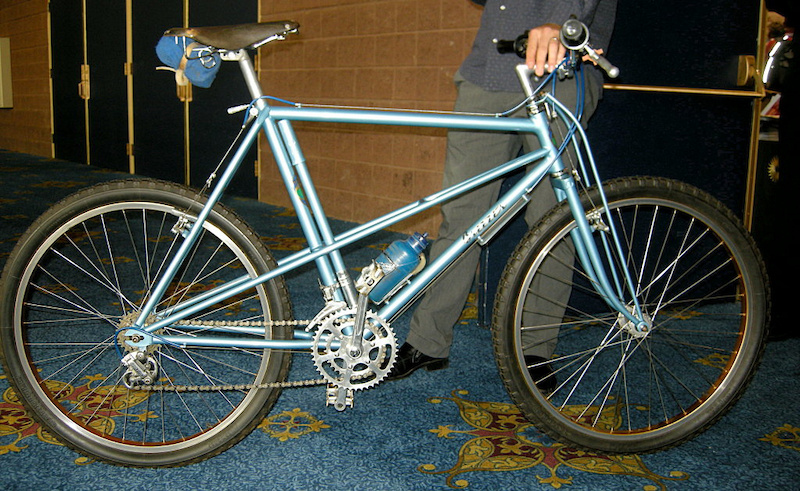 Breezer number one uses twin lateral frame members in the hope that the extra tubes would extend its life on the local trails and downhill races north of San Francisco, California. The frame was crafted from chromoly tubes brazed together. 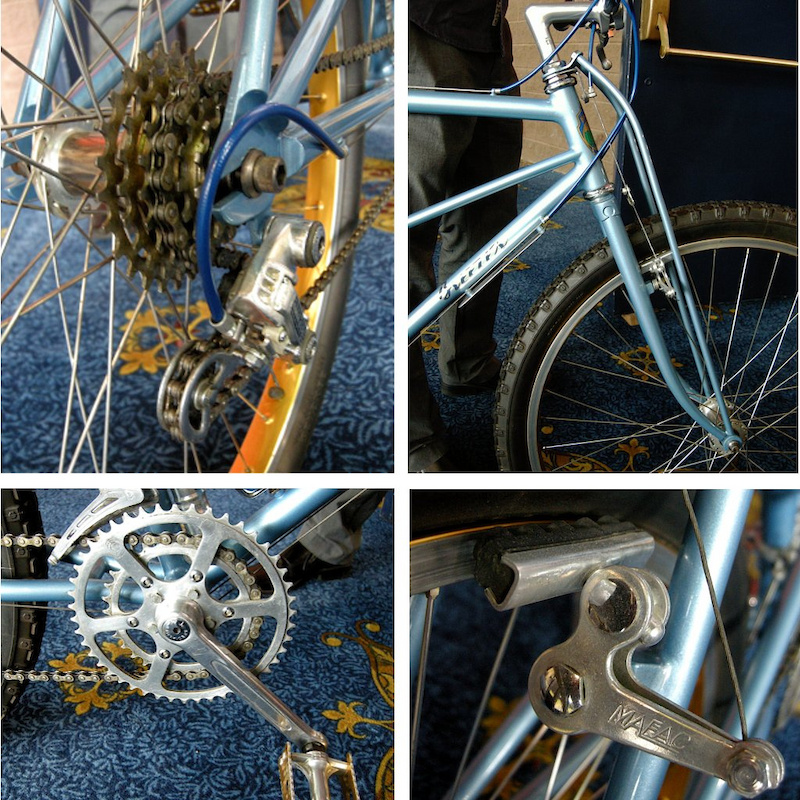 Breezer frame details: (clockwise) Drivetrains were a bit simpler in the early 70's. Phil Wood made the only sealed bearings hubs that would hold up. Freewheels had five cogs (13 x 24) and road derailleurs were the only changers available • The girder fork design was borrowed from 26-inch-wheel paperboy bikes from the 1950s, although Joe's was hand made from road bike fork parts and chromoly tubes • French Mafac cantilever brakes were popular on tandem and cyclcross bikes at the time • TA, another French parts maker, produced the only cranksets with "low-geared" triple, or double-chainring options - if 48 x 38 could be considered low geared.. 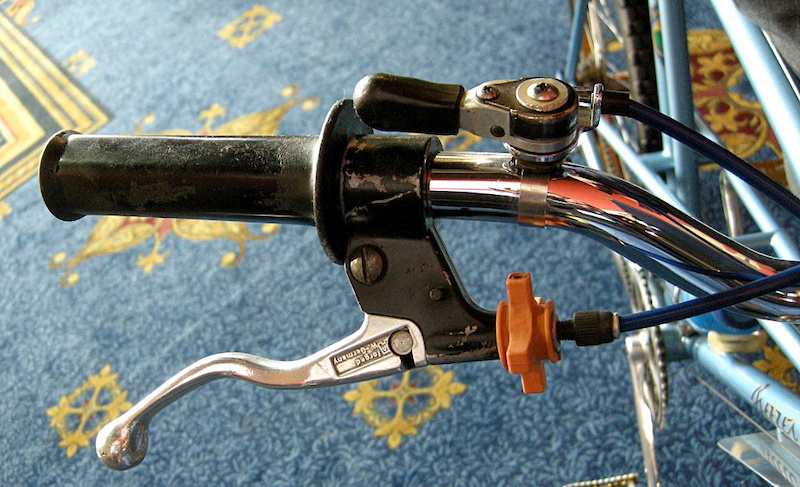 Mountain bikes were even more international in the early years. The Beezer was typical of the early bike setups with two German-made Magura motocross clutch levers or brakes. Grips were two left-side motorcycle items from the US. Cut-down motorcycle bars or modified paperboy bars were preferred, and shifters were out-of-production thumb levers from Suntour of Japan.

The Breezer was pieced together from rare parts, many of which were either out of production or forgotten items of the time. Tires came from Uniroyal of the US, The only 26 x 1.75 alloy rims in the world were made by Ukai or Araya of Japan, and only three models of derailleurs in the world (two from Japan and one from France) could handle the 'wide-range' gearing (48 x 38 front and 13 x 24 rear). It's hard to believe that we've come so far in so short a time.

Posted In:
Reviews and Tech Interbike

, but I think teamdoa just meant to point out the skills difference, especially that Peaty started his pro DH career on a steel hardtail (or even rigid? probably someone will know better), just like Johnny.

a guy called Steve Peat was there, schooled the entire field of 320 riders, coming in 1st on a fully rigid steel Kona (explosif?)

I came 13th on a Bombproof Bikes D-1 full susser (AMP Research Mac-Strut 3" rear / Rockshox Mag 10 LT fork 2.3") about 5 seconds off his time, every rider in front of me was also on full-susser apart from Peaty!

downlink (Sep 19, 2011 at 12:28)
HowStuffWorks "How Sarcasm Works"
Sarcasm is a way of speaking in which what is said is the opposite of what is meant.

almostwise Mod (Sep 16, 2011 at 3:59)
Courtesy of Dr S over at Retrobike.co.uk - A few errors in Pinkbikes write up though. Those grips are Preston Petty BMX grips and the bars are GSM motorcycle trials bars. Freewheels were six speed Shimano 600 not 5 speed as stated.
A few later additions to that bike too. The Mafacs replaced the original Dia Compe cantis and it originally wore chromed steel Ukai rims instead of those lovely Arayas.

RichardCunningham Mod (Sep 21, 2011 at 0:20)
I'm pretty certain that Dia-Compe cantilevers came much later. MaFac was the only cantilever option even remotely available then. I'll ask Joe if you want to be sure. Also, Ukai was the first alloy 26 x 175 alloy rim, and Araya came almost immediately after. They were made for fancy beach cruisers and it took a long time for them to arrive in silver or black (anodized colors were the rage then). It was actually alloy rims that made mountain biking possible because rim brakes couldn't stop on steel rims and hub brakes were foolishly inadequate and heavy.
RC

almostwise Mod (Sep 21, 2011 at 6:23)
That would be great if you could ask Joe. Something this important to the sport deserves absolute accuracy.

I love the way his pump is the same colour as the frame.

And the gear/ brake cables are similar colours too

The detail in that. He knew how to make his bike look good.

BaronVonSchwinn (Sep 16, 2011 at 2:50)
People in a LBS did not believe me when I tried to explain how wide those old araya rims were, nor did they believe in the existence of 26 inch comp III tires with gum sidewalls. the bike I had that came with those in 1985 was a Hutch Trail star, and people don't even believe that was ever made. Maybe my early life was all a hallucination, but nobody has proven that it was or was not. Denial does not bear ontological rigor in this case.

doubledeuce (Sep 16, 2011 at 12:15)
Just want to say..... do you see how far and expensive bikes have gone/become? Two rings front, 5 cogs out rear, the people who designed it just wanted to push the sport but have fun too!

Two sides to the coin I guess: Side one, its the spirit of innovation that pushes us. New frames, new designs, new approaches. The other side: We're going too damn far. its become too serious, to Big Brand and I am noticing how its becoming harder and harder for younger folk to get into the sport, due to the cost of bikes and parts now! Everything is becoming pretty expensive, with more and more needless features that most never use etc.

sngltrkmnd (Sep 16, 2011 at 0:40)
And people bitch today about "standards"... think about breaking parts on one of THESE beauties!

vtfree (Sep 17, 2011 at 17:32)
Hmmm... moto and BMX parts, built with DH'ing in mind. Promising origins. So why was it decades latter until decent DH bikes started to come onto the market? In their day Breeze and his cohorts went onto sell what were basically burly road frames that had wide tiers and flat bars (e.g. Breezer Storm).

Nkevin90 (Sep 16, 2011 at 15:45)
Yeah, not a bolt-through or a cassette hub if we need to nit-pick about it, but I think it's amazing how far we've come, with ten speed drivetrains, air-sprung suspension, dropper seat posts and hydraulic brakes, yet someone as quick as Sam Hill still prefers a similar rear-wheel setup to the one on this bike: www.pinkbike.com/photo/5412787

northwestdhdad (Sep 16, 2011 at 8:31)
My eyes bugged out a little bit and I just hugged my Shocker........awesome piece of history and great info for trail chatting.

Nkevin90 (Sep 16, 2011 at 15:35)
Sickk bike. Breeze really had his stuff together to outsource all those parts back in the day- definitely an inspiration. Y'all gotta check out "Klunkerz" if you haven't already.

bradwalton (Sep 17, 2011 at 7:40)
I used to love it when I was 14, working in a bike shop in the dirty south and the little black kids would come in and say, "look at those Mafac's!" I guess they were awesome brakes. Who'd have known?

omnicell (Nov 11, 2011 at 17:44)
The beginning with Joe Breeze... The legend... and the legend bike... very exciting to see it.. ive read about it and the advancements at later dates from Fisher and others... This was very interesting photo shoot for me...

enorbz (Sep 16, 2011 at 10:19)
I still run mafac brakes on my old Peugot haha, This would be rad to see in person, let alone ride it down the repack trail must of been gnarly

havroski (Sep 16, 2011 at 16:55)
The one thing that's so crazy is how old that bike Is and to this day the parts we use are almost identical especially the shifting

First real production version a few years later... check out those riser handlebars... not much different than what we use today...
mombat.org/83BreezerBike5m.jpg