Riders Ian Morrison and Finn Finestone were the latter, Ian’s dad Paul is a legendary ski photographer who turned his lens on bikes as they evolved on the slopes around him in Whistler during the early nineties. Finestone’s dad arrived in town around that time and worked his way into the envious position of managing the Whistler Mountain Bike Park. 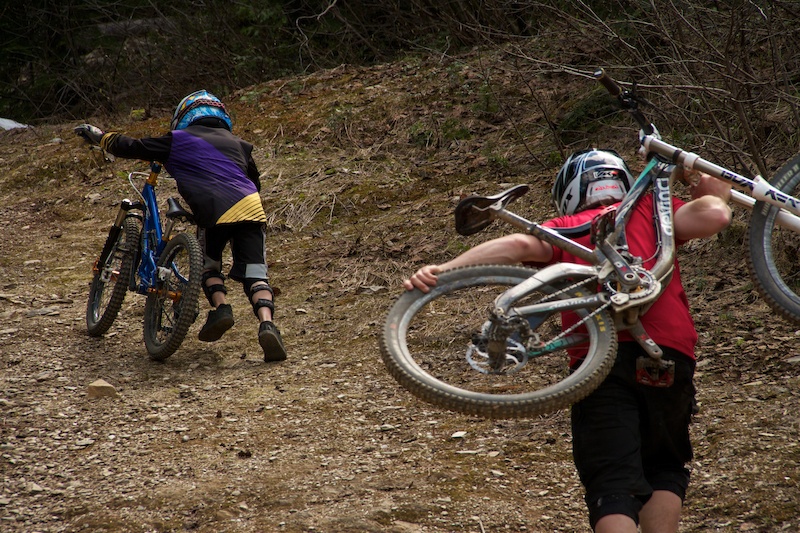 The spin off for Ian and Finn is a life of living the dream without necessarily knowing that’s what you’re doing. Ian, “I took it all for granted until I did a bit of traveling and realized Whistler is the Playboy Mansion of the sports world.”

The good thing about growing up in Whistler is you have Whistler as your backyard. Dirt jumps, pumptracks, Airdome, XC trails and WMBP are your playground after school or while procrastinating during exams. The bad thing is, everyone knows who you are, so skipping school to shred means you’re only a phone call away from getting caught by dad. On the other hand dad let’s you skip school for opening day in the Bike Park, so it’s not that bad. 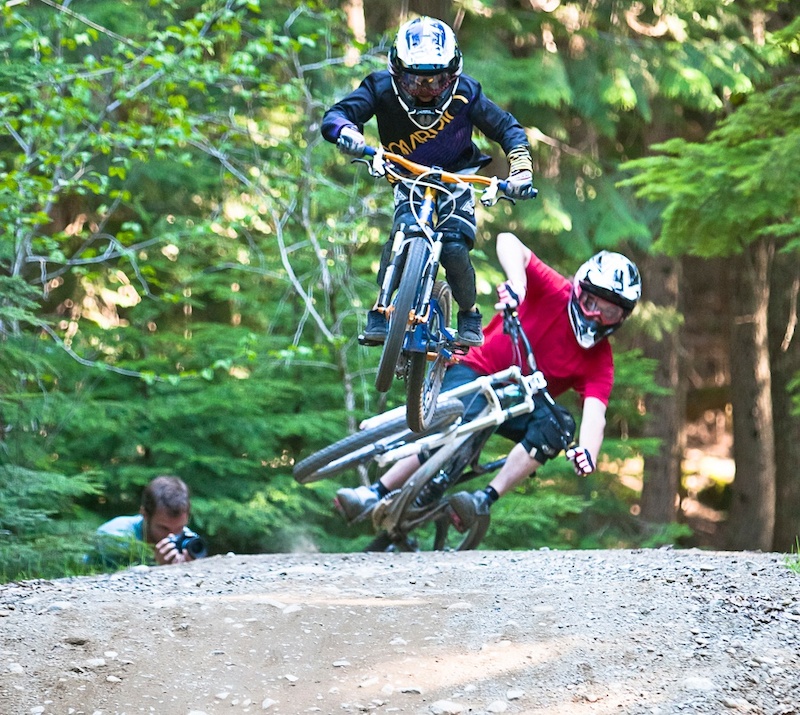 These two athletes were given cameo appearances in the Anthill Films “Strength in Numbers” appearing in mega-mo sequences imbedded in Adam Billinghurst’s high speed Bike Park segment. Ian throwing his signature inverted scrub and Finn a whipped spine transfer with style far beyond his eight years.

When asked about what they think of each other’s riding; Finn, “I like how calm Ian is, the bike is moving around and sideways and Ian stays calm” (They call that style little fella). Ian has a tougher time with the question, “Probably the fact he's 9 years and crushing it! Following Finn off the big GLC drop and A-line was a serious eye opener to what the future of mountain biking looks like, and it's rad to be able to watch his progression first hand”.

Having the bike industry at your doorstep and an A-list of pro riders around to shred with may seem like the ultimate dream, but it’s no big deal when it’s all you know. “I ride with Brandon (Semenuk) sometimes, he came and rode at my (9th) birthday this year, that was pretty cool”, name drops Finn with the nonchalance only capable from a kid who doesn’t know how rad that actually is. 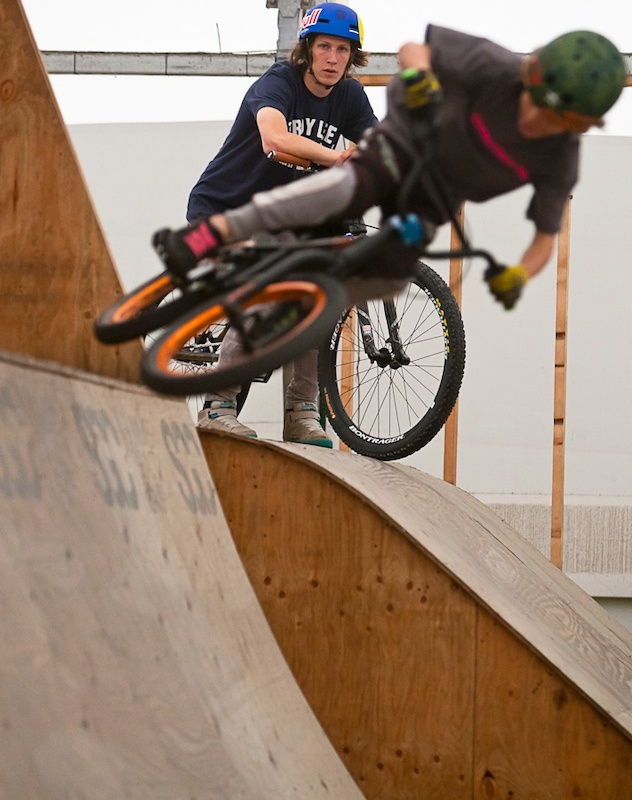 As for the FMBA world champion, Semenuk recalls growing up Whistler in a similar way, “I would watch bike movies a dozen times before bed and then get to ride with the same guys the next day at the local jumps or in the Bike Park. Kids here get a chance to be a part of it, a small fish in a big pond”.

Ultimately these guys are most lucky because in Whistler, YOU get to choose when and if you ever grow up.

Keep up with new projects at: www.facebook.com/goldsteinproductions

I was I was as good as the little kid...

I'm only two hours from Whistler, it's an amazing place, and if anybody here hasn't been there before you have to go, it's a wonderland.

Ben-Leach (Jul 4, 2012 at 15:11) (Below Threshold)
oi njdfanny, im going to have to agree with AGreen here. the technology used is truly exceptional so don't be so gullible in believing this is real

njdfan101 (Jul 5, 2012 at 0:24)
@Ben-Leach - You must have never been to Whistler, there are talents at so many different age levels its mind boggling. Also, I have ridden (rode?) with a 9 year old named Jhett and the kid shreds so hard, he inspired me to do the A-Line drop and the new Dirt Merchant drop, so don't think that because a kid is young that they cant do anything you can, or cant.

flowyridestilltherestofmylife (Jul 5, 2012 at 6:16)
I wish we had bikes like that when we were kids. INSANE SCRUB IAN!!!

cglasford (Jul 5, 2012 at 7:28)
@ben-leach.... ? you don't think this is real? have you ever been to whistler? there are tons of little shredders... this kid is for real! don't hate because he shreds harder then you.. technology or not this kid kills it... what do you think the hired a pro midget mtb rider to stunt double for him?

lexdamis (Jul 5, 2012 at 8:36)
cglasford...I need to look for my Ass because I just laughed it off my body!!!...Thanks Much!!!...This kid kills it for sure..I've been to Whistler a few times in the 80's as a teen to ski and twice to mountain bike, and I will be going for this year as well...It is truly an AMAZING place, and one of the first things that struck me was, the sheer number of incredibly skilled riders-Girls, Kids, teens, etc... One of the few places that instantly makes you happy to be alive!!!

icarpent7 (Jul 8, 2012 at 13:30)
Guys clam down, i rode with Finn while i was in whistler last weekend and he said its summer right now for him so he gets to ride a ton, his dad manages the air dome so he gets in free. So there is no way this is fake, this kid is a go hard.

Hwulex (Jul 4, 2012 at 13:13)
The scary thing is he's just as good on his snowboard.
unofficialnetworks.com/whistlers-8-year-snowboard-phenom-finn-finestone-drops-edit-94747

cglasford (Jul 5, 2012 at 11:55)
Hwulex, so what you're saying is this kid is not only the next Brandon Semenuk he is potentially the next Shaun White too? Looks like the videos back it! I hope this kid keeps at it in both sports! he has a bright future ahead of him!

gouty (Jul 4, 2012 at 12:16)
If I'm a bike company I'd be doing everything I'm my power to sponser this kid. He's not going to make you a ton of money. But supporting him at a young age wouldn't be a bad idea. Having him grow up and evolve into the company would be smart.

scott-townes (Jul 4, 2012 at 13:46)
Red Bull has been doing this for quite a while now. I'm guessing there's a couple of bike companies out there trying to do the same if he hasn't been picked up already... lucky lil bastard, haha.

hoolydooly (Jul 4, 2012 at 17:30)
My bet is on Andrew Shandro getting him onto Trek when hes about 14. Maybe a little younger. He picked up Semenuk and McCaul for Trek and this kid is showing potential.

boostedrt (Jul 4, 2012 at 12:10)
This kid is sick, It is awesome to see the young talent coming into this sport. After me and my boy watched it we had to go out and ride. INSPIRATION for every one! SHOULD BE VOD!

lol we all wish we could have had the chance to grow up in BC !! and learn to ride like FINN at such a young age. either way finn good luck in the future riding!!

stubb (Jul 6, 2012 at 1:31)
i agree with that but would also add how much i wish i had settled in a place like this for my kids to have had the chance too. the crappy concrete excuses for skate parks and dog poo covered bridleways round here really dont work after watching videos on pink bike ,

Ian has got whip/scrubbing style that I will be chasing for a long time!

chuk2rs (Jul 4, 2012 at 13:34)
I am officially depriving my children of a proper childhood. As well as my continued childhood. Great riding,

tightbore05 (Jul 17, 2012 at 8:44)
This is a pretty awesome story. I just recently have gotten in to some recreational mountain biking. I have actually just saved up to get my own decent mountain bike. www.2wheelbikes.com/ftr-mountain-bike.html

I hope to be getting out on the trails soon.

mph51 (Jul 4, 2012 at 12:47)
These young riders are gonna be a whole new breed of pro riders once they get older. Props to guys like sam, gwin, and brandon, but I see these little dudes taking the sport to a new level in the near future.

callumsmyth (Jul 4, 2012 at 12:54)
What a Little pinner! Both riders was sick! Rider behind the little guy was sick at scrubbing

dickturd-jnr94 (Jul 4, 2012 at 13:16)
"What a little ripper!" is what i was shouting all the way through watching that in a not at all manly astonished sounding voice

intensemack10 (Jul 4, 2012 at 14:05)
All I know is that I would hate to be that little dude's competition in a few years. He freakin rips. That is real, natural talent right there.

sick edit and riding..I smell a legend in future !

caldwellvisuals (Jul 4, 2012 at 14:47)
great riding, really good feel to the video seeing such a difference in age, little ripper!

MattGreenwood (Jun 6, 2013 at 16:42)
Basically the kids gonna win the fmb world tour, EVERYTHING at Crankworx, DH World Cup and World Champs, the olumpics dh ( hopefully its in by then

frojoe (Jul 4, 2012 at 23:03)
This is so friggin cool. And Ian Morrison scrubs absolutely everything.. does the guy ever get any actual airtime??

peytodog (Jul 5, 2012 at 22:37)
They neglected to show the parents collecting beer cans and living off ramen noodles so the kids can live the life.

vpfreebird (Jul 4, 2012 at 14:35)
Its a Lil Shredder Prodigy, check them out at www.lilshredder.com or FaceBook at Lil Shredder Bikes