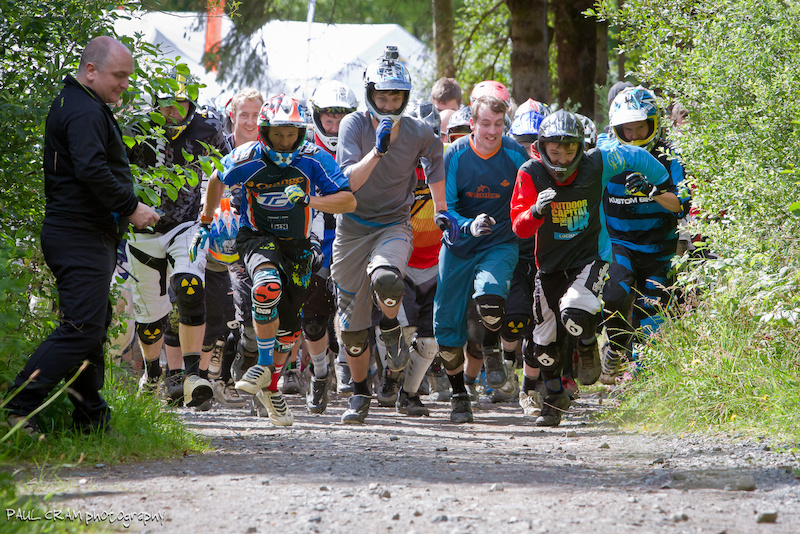 As one of the longest and most physically demanding courses on the international mountain bike race circuit, riders of this grueling event needed physical strength, quick reflexes, superb bike control and an unerring eye for the right line as they sped down the 2.82km track. They needed huge amounts of stamina in order to ride the track as many times as possible in six hours! 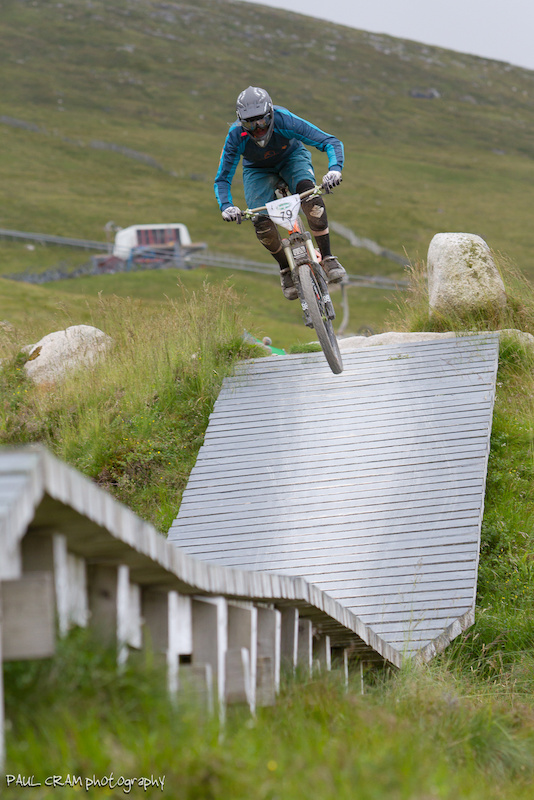 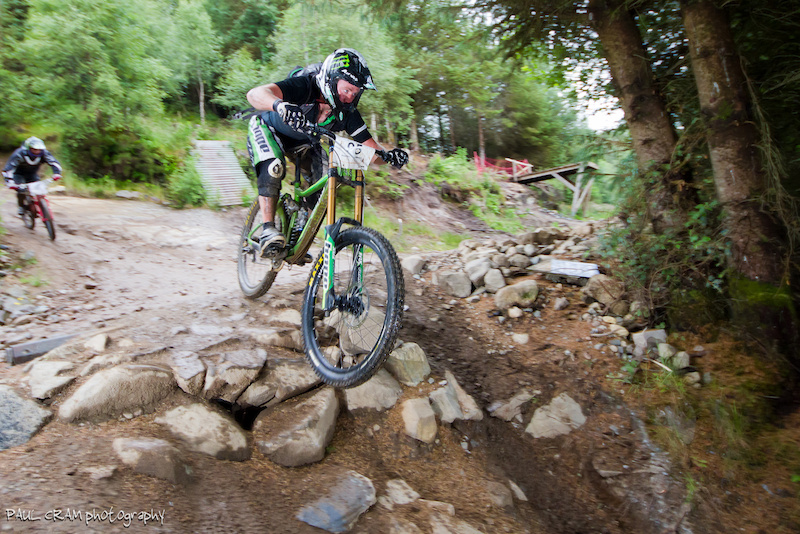 Frazer Coupland, from No Fuss Events, said: “The Fort William Downhill Endurance is a totally unique event to the UK and it has already captured the imagination of some of the key players in the downhill community. 2008 saw the winning rider jam in 18 runs of the course. It is a fresh, new and different event, whilst challenging enough to be completely in keeping with the gnarly hardcore scene normally associated with downhill riders. This is a fantastic event for spectators too. With great access onto the course from both the top gondola station and the Nevis Range Car Park, excellent spectator viewing points the length of the course. Add in a restaurant and a café, friends, family and hard core downhill fans were able to soak up the adrenaline fuelled atmosphere in style, whilst cheering on the riders as they completed the awesome challenge.” 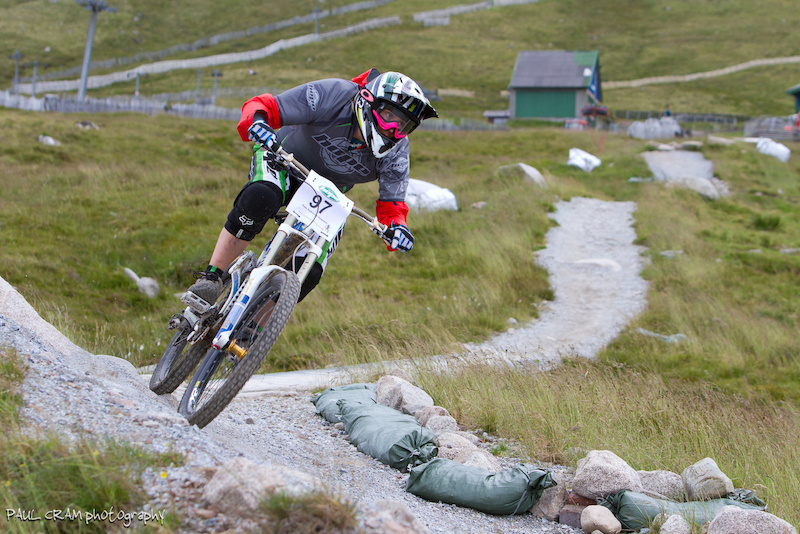 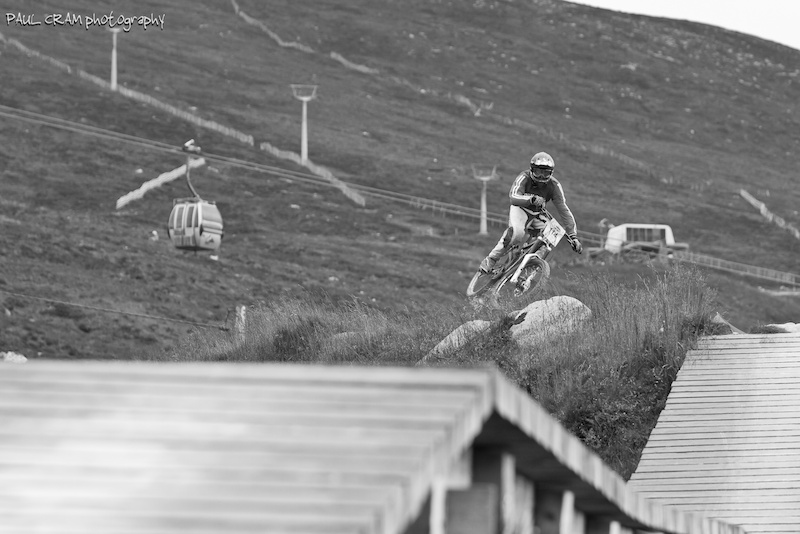 In normal downhill races riders race individually against the clock, for the Fort William Downhill Endurance riders used a Le Mans style mass start. After a short run to the event tech area, downhill bikes were collected and rode uphill to the Nevis Range Gondola’s Tower Nine – about three quarters of the way down from the top. Riders then raced as fast as possible to the bottom where they caught the gondola to the traditional start of the track at the top station. From there it was simple - the first rider to 15 laps in under six hours. 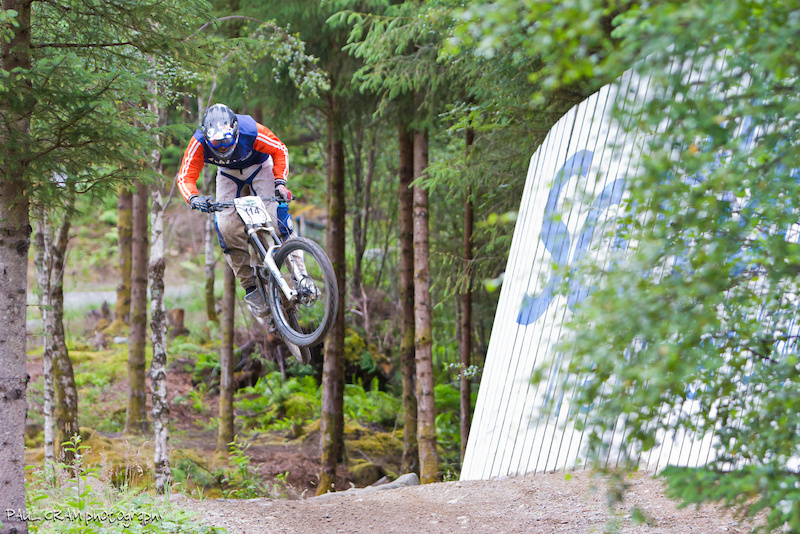 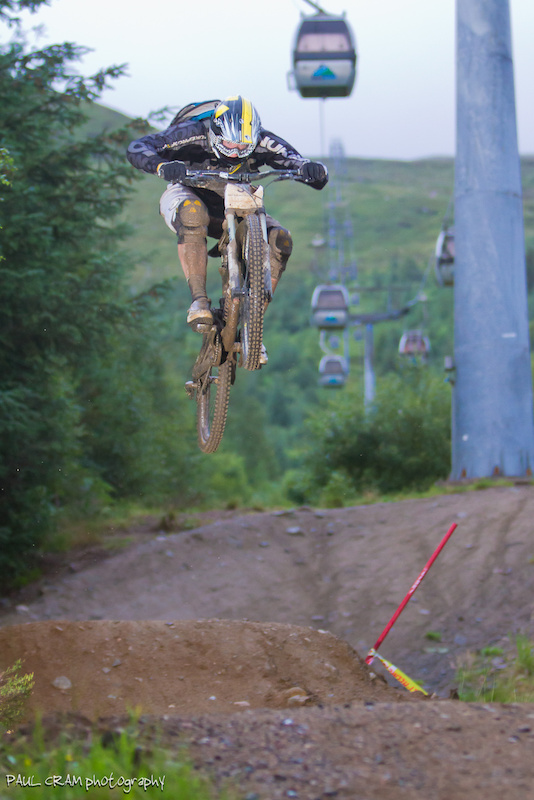 Alastair MacLennan
Each descent was timed with the cumulative descent times counting in cases of equal descents. The idea of the event is not only to test endurance, but also reliability. Participants were only allowed one bike and a list of itemized spares to see them through the whole event. At the bottom of each run participants had the opportunity to enter the tech area to carry out any running repairs, replenish fluids and to take a breather. 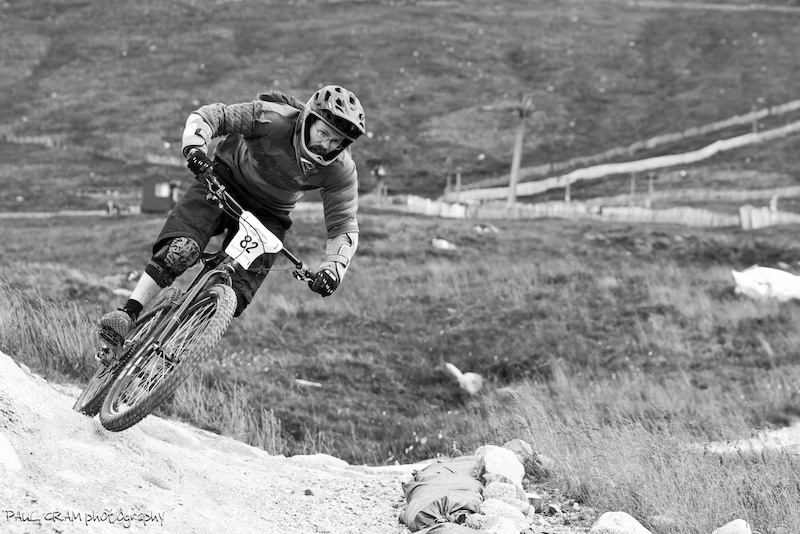 Jesse Wigman on a fully rigid 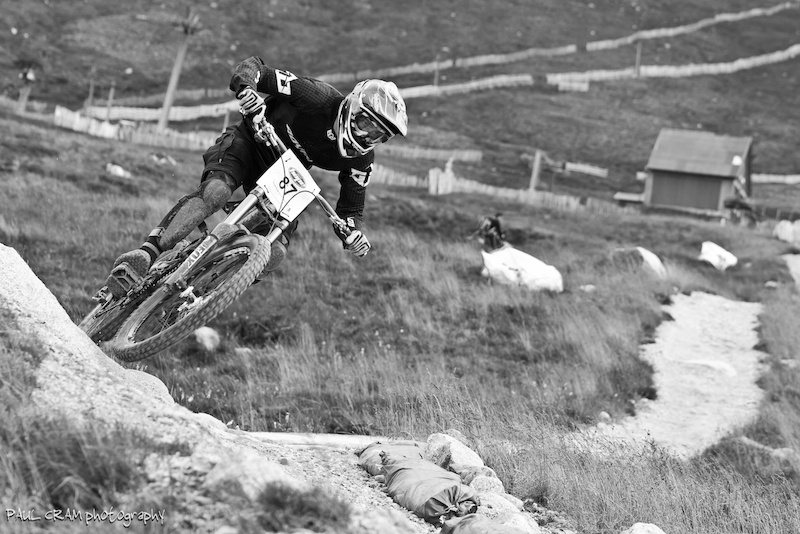 
There were timed penalties for riders who had to change wheels, forks, bars, frames and other major components. Also participants were not allowed assistance in the maintenance of their equipment from outside the tech area. 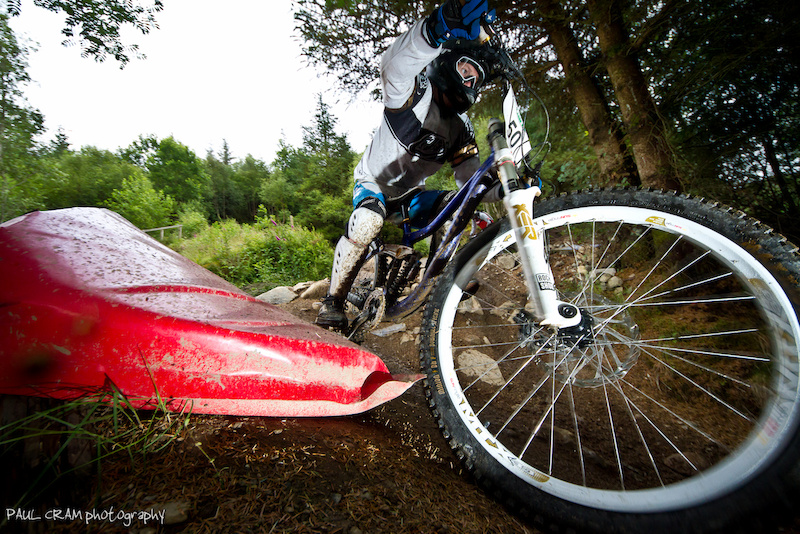 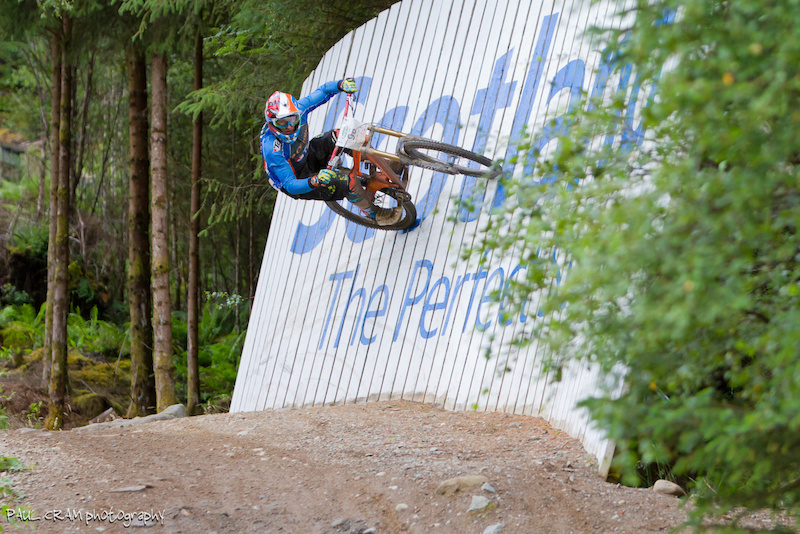 
The now famous Le Mans start didn't fail and there was great excitement as riders began to line up at the bottom of the track before a short, but tough fire road climb, allowing the field to spread out before entering the downhill track at the tower to begin the first descent. Enduro rider, Gary Forrest, took an early lead, but was chased closely by last year’s winner and local rider James Shirley, as well as Sick Skills’ Ken Bathro. As the day progressed, rider’s began to fall by the wayside as the brutal track took its toll on both man and bike. It seemed that almost every rider faced a flat tire, snapped chain, broken mech or buckled wheel at some point during the day. The remaining competitors endured both the physical and mental beating of the track. As the final hour approached and dark clouds moved in over Aonach Mor. The evening finished with some beers, laughs and good times in the Pine Martin Cafe for prize giving. 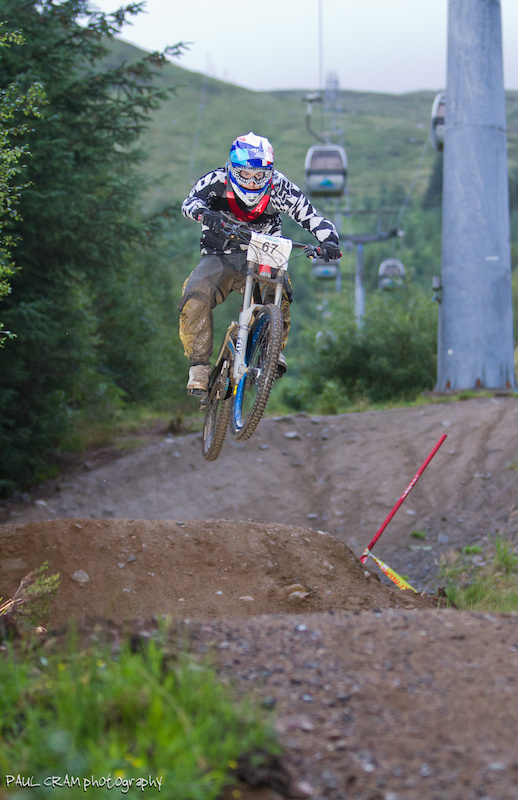 Tony Czyzewski
Congratulations to James Shirley, who took the overall win, as well as Alastair MacLennan in the Vets and Gus Jackson in the Super Vets. Jessie Wigman took the Hard tail category on a fully rigid mount. Hope rider Rob Jarmen took second senior position with Rachel Walker also riding for Hope taking the win in the female category. 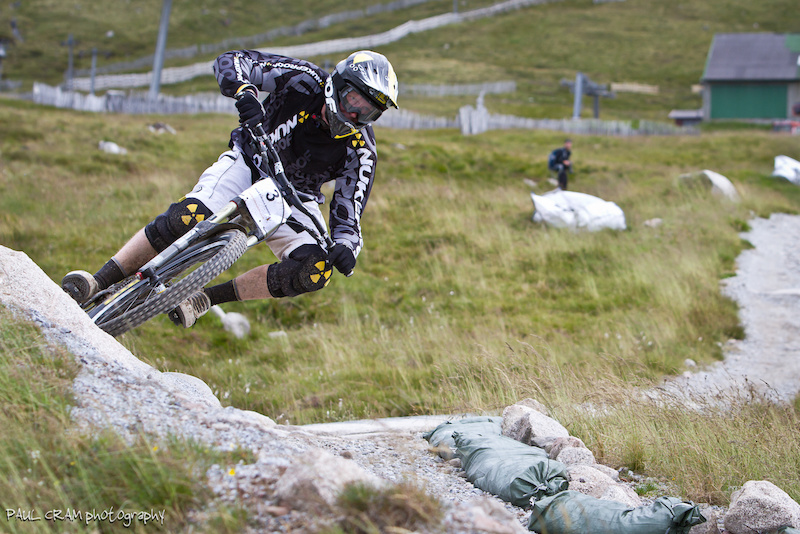 A special mention for the top three juniors, Fraser Grice, Keir Coupland and Finn Munro, who all completed 13 laps and finished well within the top half of the total field.

Stay Unclipped.
Si Paton..
Give us a like - Halo British Downhill Series

flight96 (Jul 31, 2012 at 9:26)
This sounds and looks like a class race and id love to take part in it next year...one thing tho they signed this off with "stay unclipped", however, most of the pictures here show riders using spds....they are the way to go!!!

Fuglio (Aug 1, 2012 at 6:05)
Do they wait in line at the lift. Seems like you could be a good min a head of someone then have to ride up with them waiting for a chair... Unless they run a shit load of chairs. It would be interesting to know how they keep people from bunching up at the bottom.

paulcram (Jul 31, 2012 at 3:47)
No luck mate. I broke my left wrist in two places, and my right shoulder in two places when I fell off at Inners in April.The price we pay for the sport we love!

Pabail (Jul 31, 2012 at 8:48)
yeah if you kept going i wonder what the upper limt / max is anyone could do....was trying to calculate it...i know unless youre a pro on a good day its it wee bit more than 5 minutes a descent! ...but dont know exactly what transit times are like from lower point to upper gate...it takes a bit to go up in the chairlift but i never timed it when i was on it...