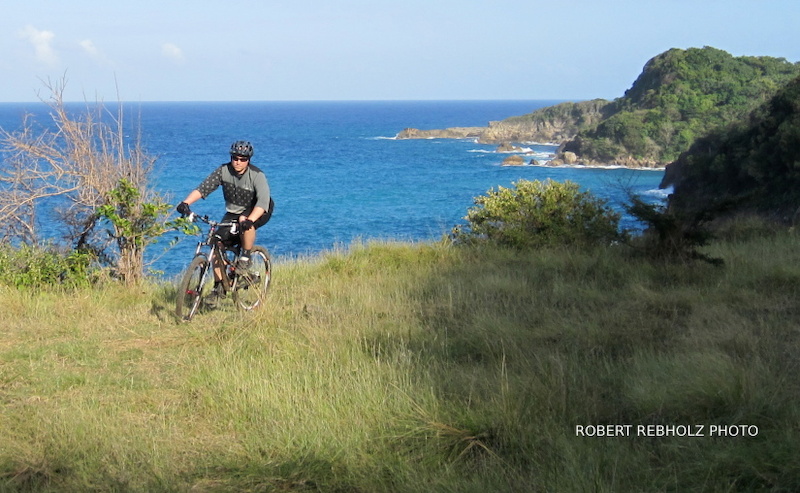 I fell in love with Jamaican culture long before I ever laid eyes on the mighty shores of the island. It was seven or eight years ago and I was holed up in Park City, Utah for a long winter season. My snowboarding buddy was a reggae dj and was deep into Jamaican culture. He put me on to classic roots, rock, reggae like Jimmy Cliff, Toots and the Maytals and, the king, Bob Marley. After a long day on the slopes, he’d pop on an old school Jamaican film like Rockers and Harder They Come. I couldn’t get enough of the beautiful vibrant culture that was so different from the heavily Mormon-influenced Utah. 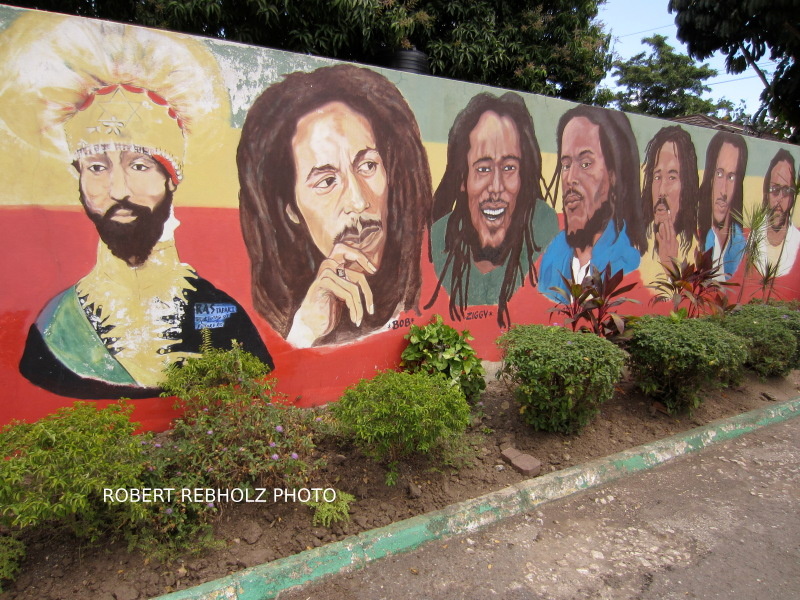 Fast-forward to this past February and the stars finally aligned for me to take my first trip to Jamaica. My long time riding bud from Switzerland and all-around nasty shredder, Alban Aubert was interested in checking Jamaica as well, so we met up in Miami and hopped on a flight to Kingston. 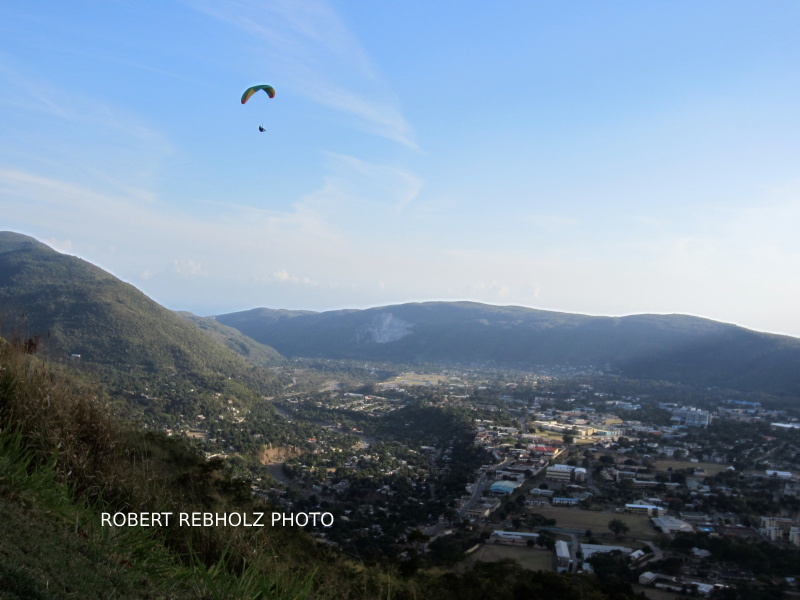 Jack’s Hill (Kingston)
We were greeted at the airport by our main contact in Jamaica, Winston. Winston is a native Jamaican who lived in New Jersey for some time and got into mountain biking there. We share a good friend who recommended me to hail up Winston when I got down to Jamaica.

Winston picked us up and took us back to his place in Jack’s Hill, which scenically overlooks the hustle and bustle of Kingston, Jamaica’s largest city. As we drove up the tight switchbacks into the hills surrounding the city, the lights of Kingston sparkled like a million tiny diamonds. In the tiny villages we passed, reggae bumped on old boom boxes and people spent their Saturday evening selling fruit and drinks by the road or just cooling out talking to their neighbors. I was so excited to finally be in Jamaica that I could barely sleep that first night. 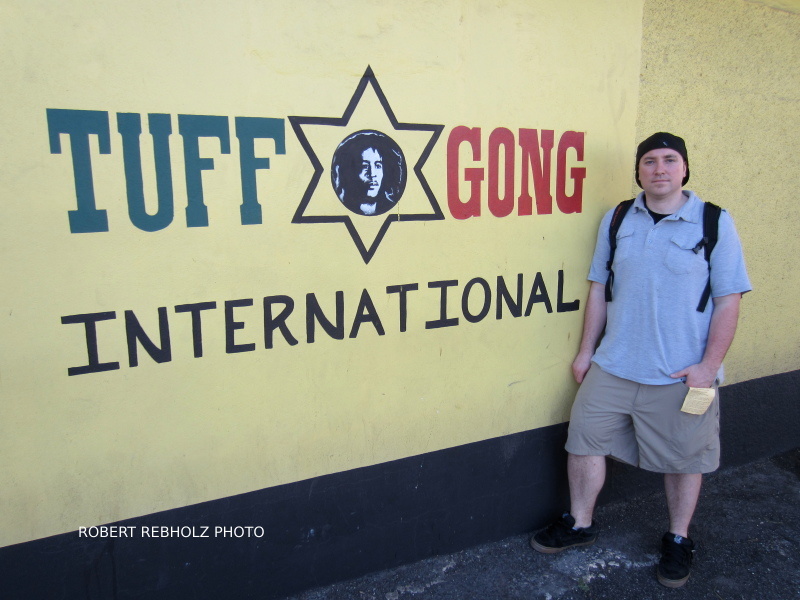 Winston usually does his rides before sunrise, but he made an exception for us weary travelers. “The sun burns hot in the middle of the day,” Winston explained. “I start my daily ride with night lights at 5 am.”

From the upstairs balcony Winston pointed to a small town miles away on the ridgeline of the Blue Mountains. Through the thick jungle surrounding it, I could just make it out. “That’s Newcastle,” Winston explained. “It’s where we are climbing to today,” Winston said. Winston and his buddy Courtney were both monsters on the road climb up to the trailhead. As we slogged up the road with our 2.5-inch tires, Alban and I dreamed we were on road bikes. Once we reached the top of the Red Light Trail, we were more than glad to be on our enduros. As the name not so subtly implies, this trail was once where ladies of the night plied their wares to British colonial soldiers. As we were flying down the bermed corners and floating over baby head rocks, I couldn’t help but think that I was getting my kicks on the same trail in a much different way than the old Redcoats.

Winston took us to a natural waterfall to cool down after the wicked downhill. I couldn’t imagine a more idyllic mid-ride break spot. The waterfall hit with just enough force to give a great massage to my aching shoulders.

The next day we hooked up with our driver for the trip, Roachie. Roachie is one of the coolest cats that I have met in my entire life. We couldn’t understand a word he said because his accent was so thick, but he’s just one of those dudes that is super damn funny and has your back if things get choppy. We were stoked that he was down to whip us around the island and shuttle all the spots for the entire ten days. 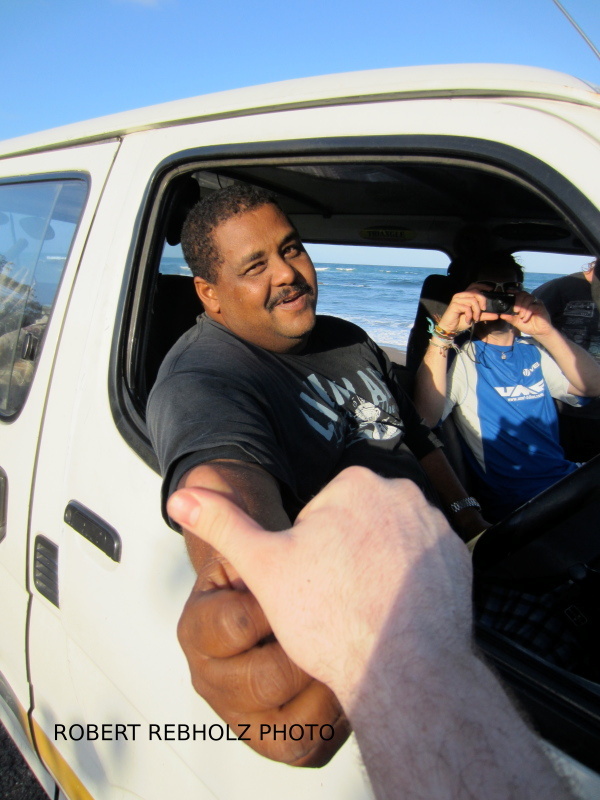 Most tourists who come to the island skip right over the largest city, Kingston, and head right to the beach. Alban and I were keen to see some culture, so Roachie took us to some really great sights in town. We took a tour of Bob Marley’s home where the attempt on his life happened. We even got a chance to meet his son Damian “Junior Gong” Marley. He recommended checking out the Tuff Gong recording studio where his father recorded countless hits. 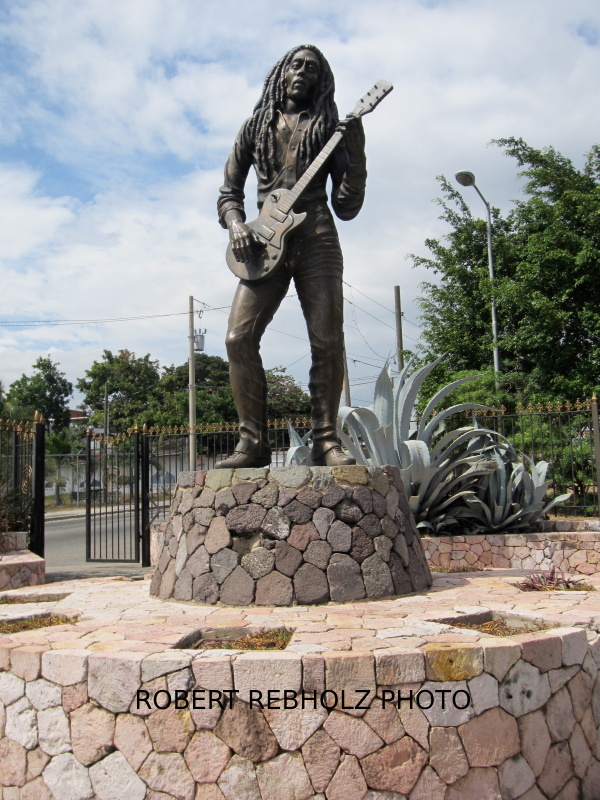 The tour of Tuff Gong studios was an awesome experience. We got to see some of Bob’s instruments, the actual recording studio and the record pressing equipment. After Tuff Gong we headed to Trenchtown where Bob grew up. The tenement yards can be quite rough and are no place to go without a guide, but it was rad to see the single bed that Bob and Rita slept in and the guitar he learned to play on. 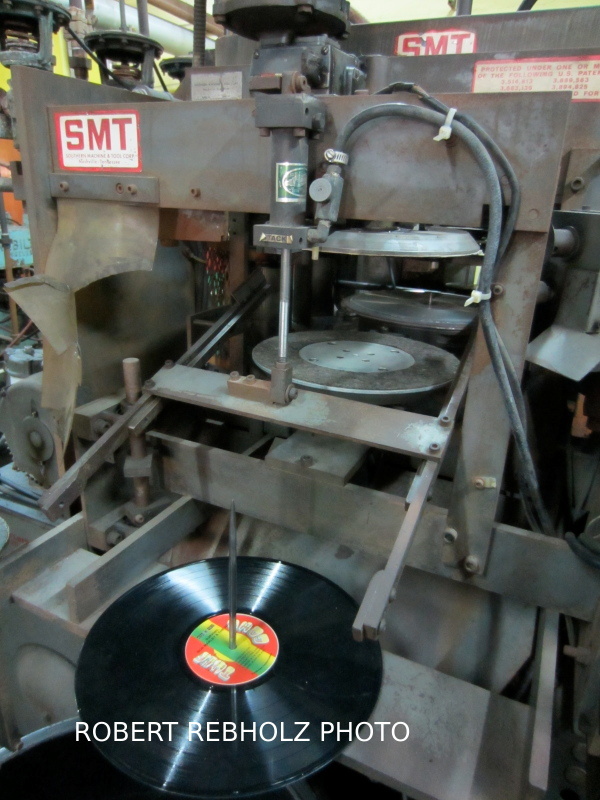 Ocho Rios
The following day we set off for Ocho Rios. Ocho is where the heart of Jamaican mountain biking is, in large part to two ex-pats. Jonathan Gosse and Andrew Giles, originally from the US and the UK respectively, have created something very special in the foothills above Ocho Rios and Robbins Bay. Jon and Andy host the annual Jamaican Fat Tire Festival, which is without a doubt the best way to enjoy mountain biking in Jamaica. Alban and I weren’t able to make it to the festival, but what they offer in terms of riding and entertainment for the price cannot be beat. (SMORBA.com) 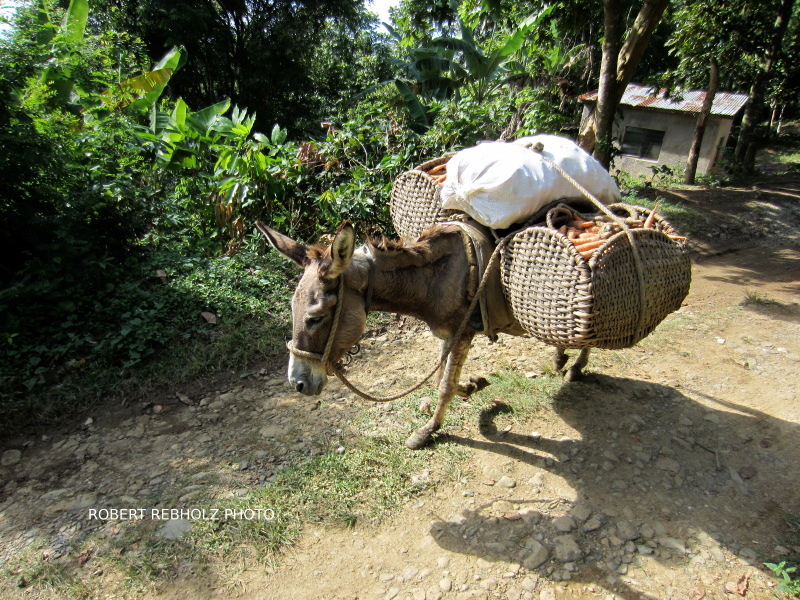 We hooked up with one of Andy’s buddies, Gary, who was good enough to guide us for the day. The first spot that we shuttled was John Crow Gully. The track was short and sweet, like mangoes that littered the floor of the dense jungle. There were some nice off camber rocky sections to wake us up first thing in the morning. It was also really cool to see locals coming up the trail to harvest the fruits of the forest. It’s the first time I’ve ever seen dudes with donkeys and machetes on a trail before! After a few laps on John Crow Gully we took another shuttle to the top of the Pressure Drop trailhead. The start of the trail starts on land owned by a rasta named Grant, who is one of the most down to earth people I’ve ever met. Grant helps shape the track and keeps things running smooth by clearing the trail of sticks, stones and of course fallen mangos. It was awesome to talk to him and see how stoked he was that people were enjoying the trails.

Pressure Drop was a fantastic trail with lots of sweet features to hit. It was definitely built to be ridden fast and I did my best to hang with Alban and Gary. We did a couple shuttles on Pressure and then we embarked on a bit of longer trail, Carlton Pass. Carlton Pass required a bit more climbing, but was absolutely worth it. There was so much flow on this trail it should have been illegal. I don’t know if I touched my brakes once and the speed you could get just pumping out of the bermed corners was enough that you didn’t even need to pedal.

The views on Carlton Pass were pretty amazing as well. About halfway down, the jungle opened up and the deep azure Caribbean Sea could be seen. Gary pointed out a few sights from our vista and then showed us Robin’s Bay, the spot on the beach that we’d be riding to. “If you guys had come during the Fat Tire Festival there would have beee cold beers on the beach waiting for us,” Gary said with a smile. 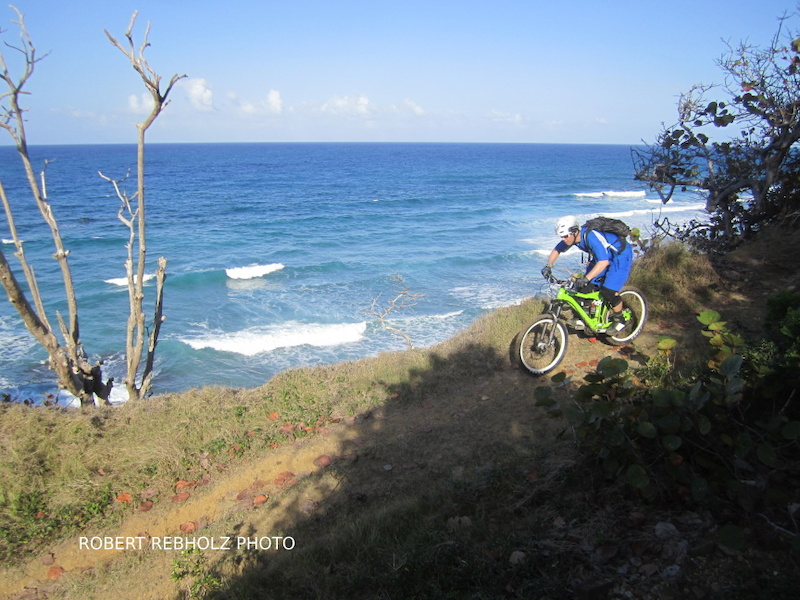 The rest of Carlton Pass was just terrific and even though Gary had prepared us that we’d be stopping at the ocean, it was still a shock to come out of a corner and be greeted by a tiki hut on a secluded, private beach. Alban and I agreed that this was the coolest place to end a ride that we’d ever been on. 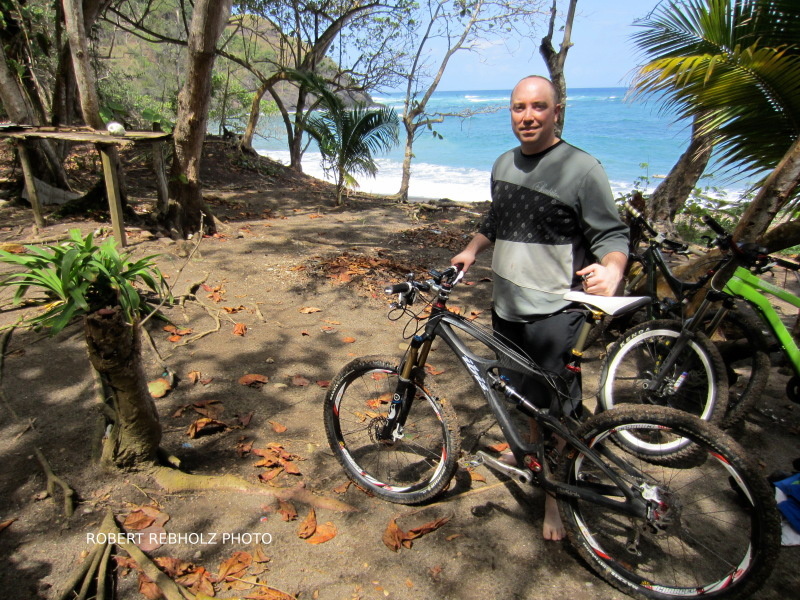 Negril & the South
From Ocho we headed to the western most point of Jamaica, Negril. It was great to take a few days to chill and take in some rays on the beach. The ocean was just the perfect temperature for swimming and the relaxing scene in Negril was just what we needed before the last leg of our trip. We took some time on our way back to Kingston to check out reggae legend Peter Tosh’s final resting place in Bluefields. It was awesome to see the home that he grew up in before moving to Kingston where he would meet Bunny Wailer and Bob Marley to form the greatest reggae group of all time. Alban and I were extremely lucky to also meet Peter’s mother and one of his sons on the visit as well. 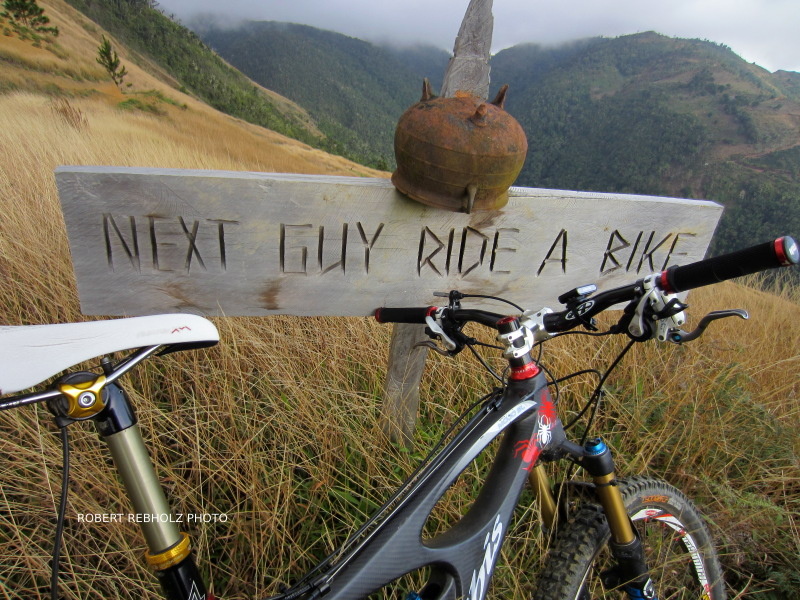 After our sight seeing and beach bumming in the West, it was time to head back East for the last ride of the trip. Andy had arranged to guide us at a private spot that is not open to the public, but is a part of the Fat Tire Festival. The views from the Blue Mountains are some of the most impressive I’ve ever seen. 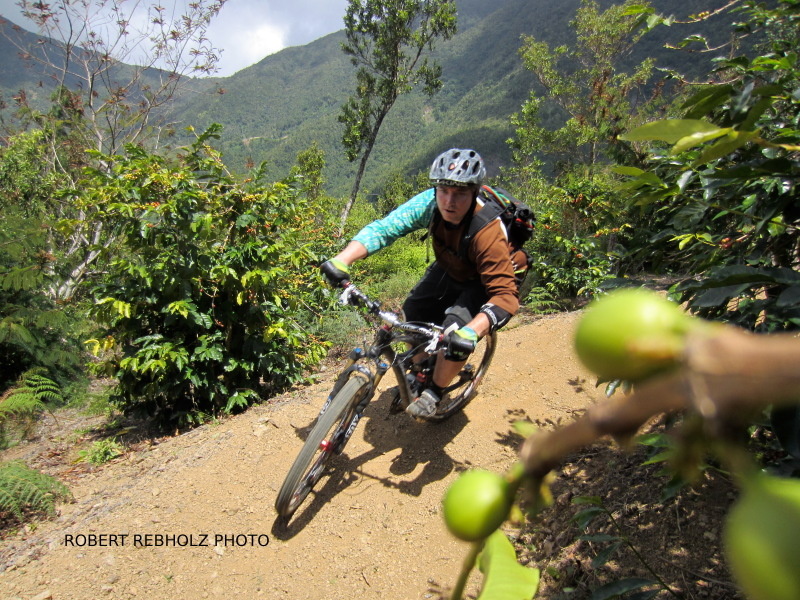 From the top of the 6,000 ft trailhead we could see the lush green rolling hills of the jungle, the metropolis of Kingston and the blue of the Caribbean Sea. It was one hell of an afternoon of riding and I’ll let the photos and Alban’s video do the talking for the quality of the trails. 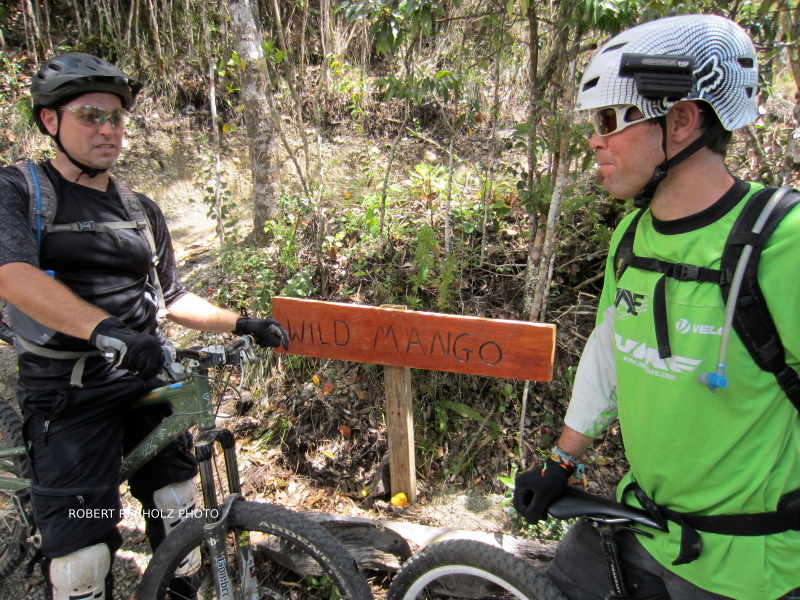 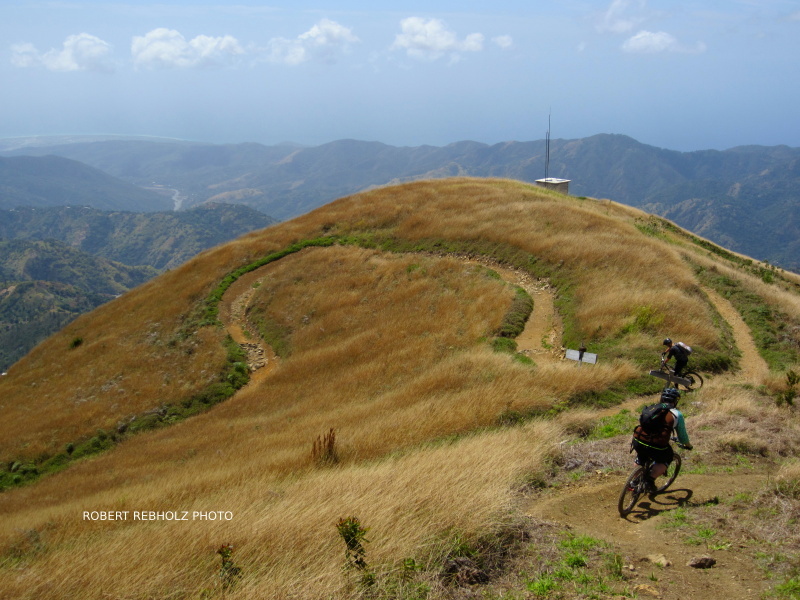 Conclusion:
After visiting Jamaica, the things I’m most struck by are the beauty, diversity and uniqueness of the tiny island nation. Whether you’re chilling on the black sand beaches of Robbins Bay or riding under the thick jungle canopy in the Blue Mountains, there is always a feast for the senses. You will never forget that you are in a special place, because the sights, sounds and taste of the country are all around you. Jamaica is awash in culture and I dare you not to be swept away.

Special thanks from Alban and I to everyone who helped us make this trip a special one- Winston, Carl, Roachie, Jim D, Andy and Jon.

ochirider (May 19, 2012 at 8:24)
Well said Medellin, There is plenty of ganja around but it is illegal and the Jamaica Tourist Board certainly doesn't like it being highlighted.

madmon (May 18, 2012 at 16:00)
I wish people would stop posting videos of my private beach, water fall and trails. Too many people are showing up.Quaaman's Falls[Rasta Falls to us ras} and Black Sand Beach. The rest of ya pony up 1200US and beg Andy for a spot in the festival. Also anyone passing Grants house please give him something. Thanx www.smorba.com

dualsuspensiondave (May 18, 2012 at 16:21)
Don't think anyone could even find your spots because of this video. Will definitely hook up Grant when I'm cruising through. Keep shredding!

madmon (May 18, 2012 at 16:32)
dude....I posted a head cam from my cabin rental DH 3,000 feet to a river and people found it and rented it and rode there. This past February I could not rent the cabin during the festival as 4 Quebeckers took it for a 3 weeks after viewing my asshat bare raw video on ueffentube. sometimes i hate the internets

ochirider (May 19, 2012 at 8:27)
Those guys were totally clued in before they saw your video dude, they would have made it there without you, so don't feel bad about givin away the goods!

telebiker (May 18, 2012 at 9:33)
Newcastle is a small town/military base in the hills high above Kingston. Red Light trail starts right from the base parking lot.