Join Pinkbike  Login
Santa Cruz Syndicate is excited to announce the addition of Josh Bryceland to their powerhouse gravity squad. Bryceland, the up and coming 17 year-old from Manchester, Great Britain, is the reigning UCI World Cup Junior Downhill Champion and British National Junior Downhill Champion. Steve Peat has been grooming him for a few years now, and this year Bryceland has proven that he has the talent to play with the big boys on the UCI World Cup circuit and has earned himself a position on the Syndicate.“I’m so happy to join the Syndicate. Steve and Nathan are two riders I have looked up to for a long time and to now be on the Syndicate with them, it’s a dream come true! My goals for ’08 are to consistently place top 15 at World Cups, keep hold of the yellow jersey, and to podium at World Champs,” says an excited Bryceland.

Steve Peat is pleased to have his protégé on board and says, “I have been helping Josh out for a long time now and I like what I see. He has the drive to be the best and I think he fits the Syndicate mentality well. He is already an amazing rider at a young age and I think he will flourish riding along side Rennie and myself. Welcome aboard Josh!” 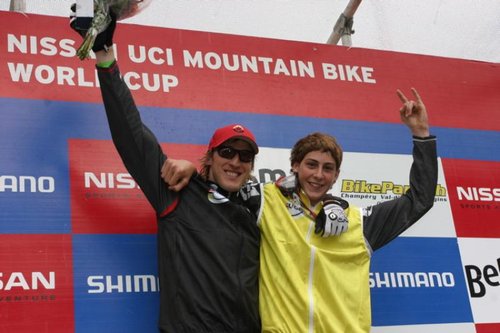 Rob Roskopp, owner of Santa Cruz Bicycles says of his new addition, “Josh has what it takes to be the next superstar of downhill. He has a great personality, tons of skill and he’s very driven! We welcome him into the exclusive club known as the Santa Cruz Syndicate.”

Bryceland has had a remarkable season on the UCI World Cup scene as well as at the NPS British National races. Highlights of his year include qualifying 5th and placing 9th at the UCI World Cup Downhill in Maribor , Slovenia . At the NPS race in Ae Forest, Scotland he took the junior win and placed 4th overall, just ahead of Greg Minnaar and behind Matti Leihikonen. A flat tire marred his world championship race run, so he is hungry for the Junior World Championship title in ’08.

The Syndicate has a focus on the downhill putting the flagship Santa Cruz V-10 under the top riders in the world. Our aim with Bryceland is to take him to the top and assist his development into the caliber of his mentor, Steve Peat. He’s off to a strong start as he has been aboard the V-10 for the last year. With full race support behind him, we expect Bryceland to continue to shine in 2008 as he contests a full UCI World Cup circuit, World Championships and British National Series races.

Thanks to the SYNDICATE Sponsors who make this possible: