Join Pinkbike  Login
Author factory rider Michal Prokop from the Czech Republic needed just one month to collect five big wins! World Champion, World Cup Winner, European Champion, National Champion and Czech 4X Cup winner. Dominating all the biggest fourcross events, bringing the crowds amazing battles with his long time rival Brian Lopes and all the other fast 4X and BMX riders.After the horrible crash that lead to the worst injury of his career at the World Champioships in Livigno, he has had a successful recovery. Michal Prokop started his off season for the very first time with very serious and hard training on a track bike. But you know Michal, this young man is always looking for new goals. It was not just a training, four months were enough to be nominated into the czech national team and bring Cane Creek´s fantastic new wheels Aros 58 Track for 2006 Track World Championships in France!

Over six thousand spectators got to witness Michal Prokop in action after his injury at the SEAT 4X Masters. The first ever international fourcross race in Prague, capitol of the Czech Republic. Eighty top riders from 12 nations, including current world champion Brian Lopes, freeriding star Kyle Strait and world cup winners Leive-Ove Nordmark and Guido Tschugg accepted Prokop´s invitation to this celebration of the sport of fourcross. The event would be running on a brand new track, built according to the specifications of Mr. Holeshot-as many call Michal Prokop. Michal won the qualification and all his heats which brought him into the great final against Marosi, Tatarkovic and Lopes. The final round of SEAT 4X Masters was just pure essention of fourcross racing with Prokop and Lopes drag racing on the 70 metre long first straight. The Unique combintation of precise start reaction, unbeatable strength in his legs and technical skills, that´s what you would need to beat Michal Prokop on his home course named Polis XIII. No one was faster on May 1st 2006, Prokop clearly won SEAT 4X Masters. For more details please visit www.seat4Xmasters.com 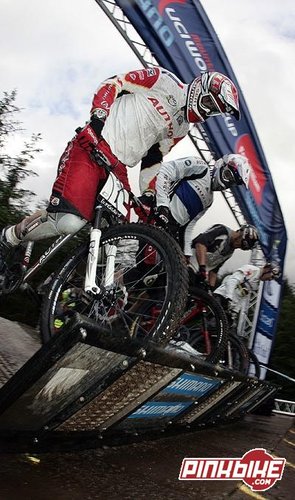 Five days left and Prokop stays on the top of podium again. UCI 4X World Cup 2006 started in spanish Vigo and it´s the same simple game as it was in 2005. Prokop won the qualification, all his heats and then also the final.

One week later, another country, totally different bike. No matter what kind of bike he is riding, consistency could be his nick name… Prokop is taking another gold, this time at the 3rd round of European BMX Championships in Germany!

May 21st, Czech 4X Cup, round one. Not just a national level race but the base where many of the World´s top fourcross riders, of the UCI's number one ranked nation(Czech Republic) are comming from. Prokop, Marosi, Tamme, Tatarkovic, Slavik and many other not yet well known 4X dogs you can see at Czech 4X Cup. To get into the final in Elite category is just a dream for most of 4X riders. Note that one position on the gate is almost booked. Every single race of the Czech 4X Cup that Michal Prokop attended, he also won. Same in Prerov. Fourth gold in three weeks!

This "machine like guy“ takes in about 50 races every year and most of them are medal positions. The World´s best gravity riders will try to catch him again this Saturday at third stop of UCI World Cup in Willingen, Germany. Stay tuned.