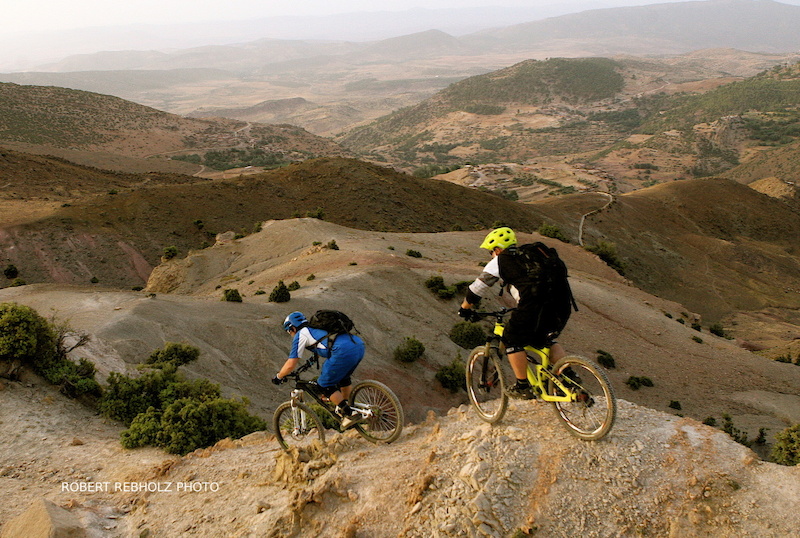 It's a big world out there with tons of rad places to ride. Traveling is expensive and there's only so much time that you can get away from home. How do you narrow it down to just one place to shred?

For me, picking a destination to ride is based on a convergence of factors. I love going to exotic spots where people live in a different way than I do. I also love riding with good friends, so obviously where they are interested in going makes a big impact on the group's decision. More than anything, I pick my riding trips based on where I can go to get the longest, most flowy descents possible. 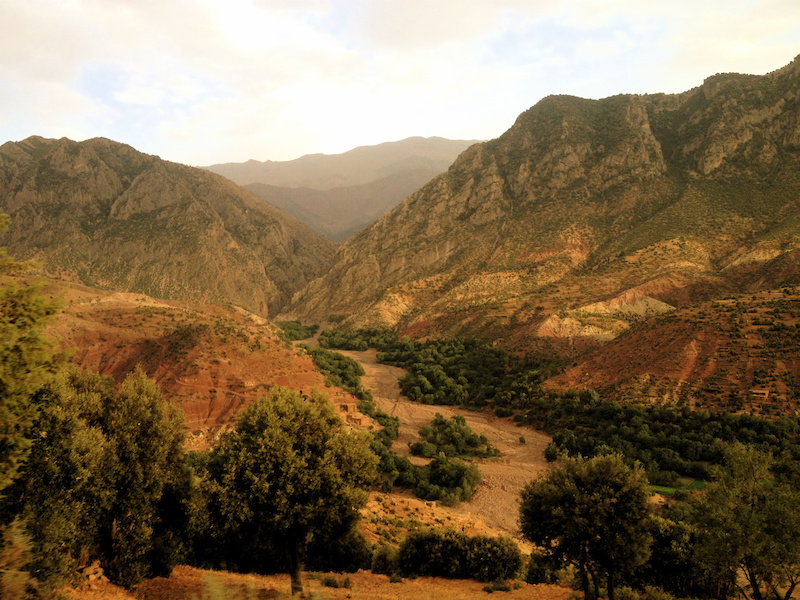 This year, the stars aligned to ride the High Central Atlas Mountains in Morocco. Ever since I saw the riding in Morocco in Roam and New World Disorder, I wanted to visit there. The landscapes looked so epic and the culture seemed rich and vibrant. When I heard that my guiding buddy Kris Dassi from Exoride was planning a trip there, I was intrigued.

"The Atlas Mountains are big like the Alps, but not as steep," Kris explained. "You don't need to be on the brakes as much and the trails are very flowy." Kris said the magic word, "flow," and I was in. 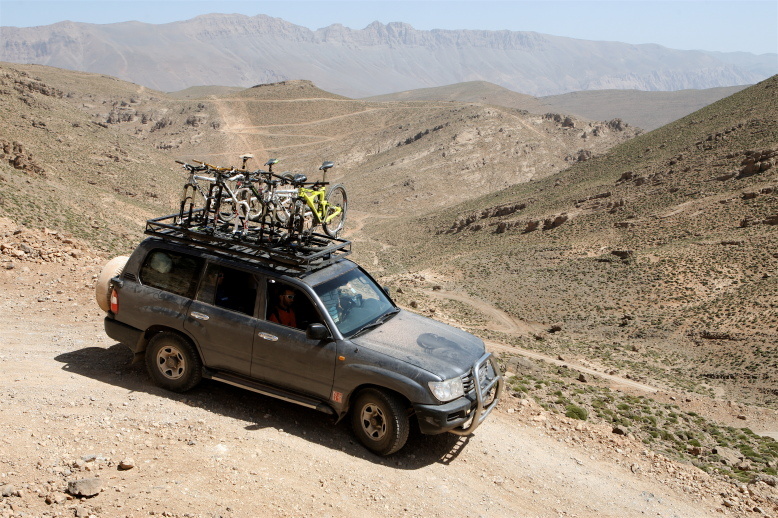 The three of us flew into Marrakech and were greeted by our guide Redouan and driver Mohammed. I thought maybe we'd have some down time, but it was, "Yalla, yalla, yalla!" (Arabic for go, go, go) from the start. We built our bikes in the parking lot of the airport, drove three hours to the foothills of the Atlas Mountains and got a sweet sunset ride in.

After the ride we headed to the small hotel or Gite and got comfortable. It was an awesome little place in the middle of nowhere and had a sweet Turkish bath, or hammam on the property. Nothing feels better than a hot bath after a day of traveling and shredding! 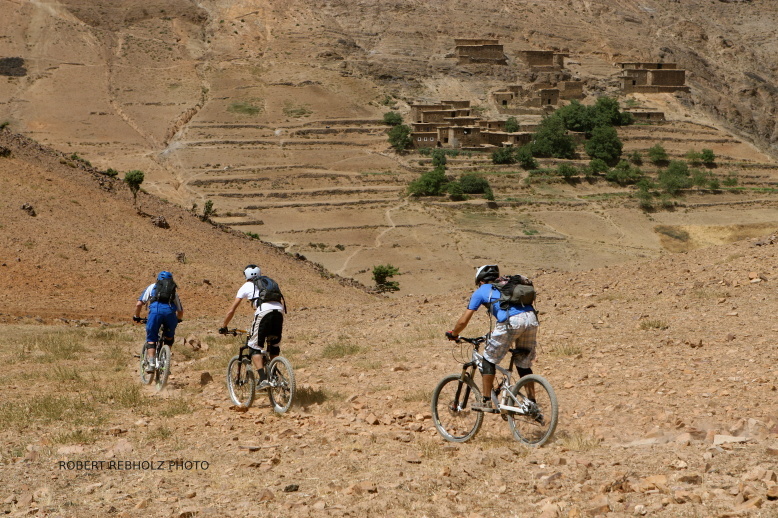 The next day we got up early and hopped a shuttle to the highest point they could take us, a village called Tissekrine. From there we climbed for an hour or so and had a sweet descent from the 7,200 ft. peak of Tizi n'Tirghst. The trail was fast and flowy and ran next to local architecture built seamlessly into the desert landscape. 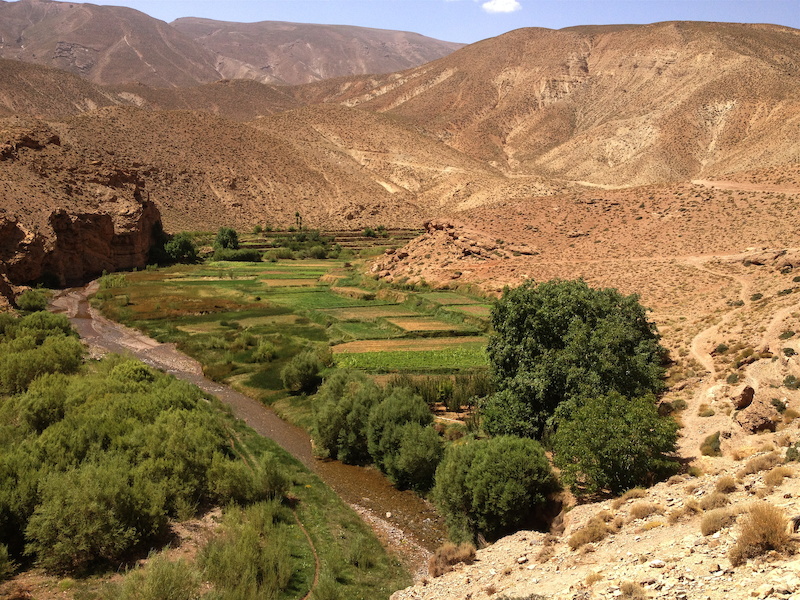 Our guide Redouan explained to us that the people living in these remote valleys were completely self-sufficient and used ancient Egyptian water collecting techniques to farm. It was wild to see these thriving bright green patches in a sea of dusty rock. The villagers were super welcoming to us and were happy to show their hearty fields of corn, apple orchards and fig trees. 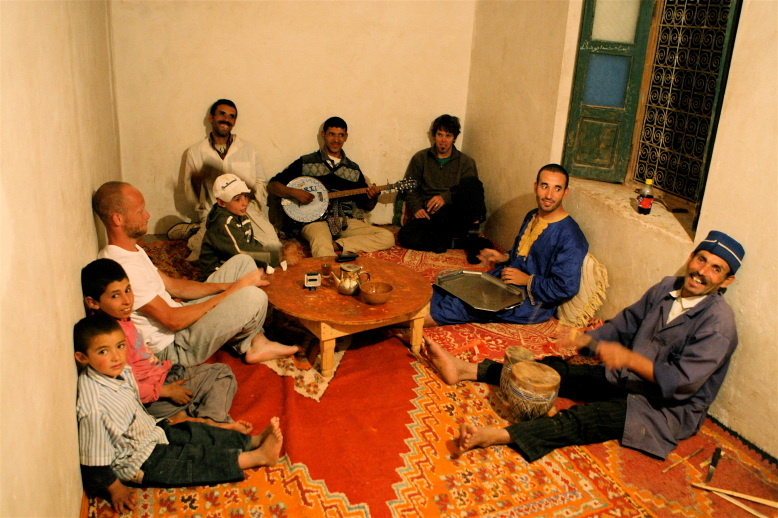 One of the many highlights of the trip for me was the sing-alongs after dinner at the Gites. As we crossed high pass after high pass, one thing I could always look forward to was a nice plate of mouthwatering Tajine and some good company at the mountain hotels. Every village we went to, the locals made us feel right at home and it was great to see their culture in such an intimate way. 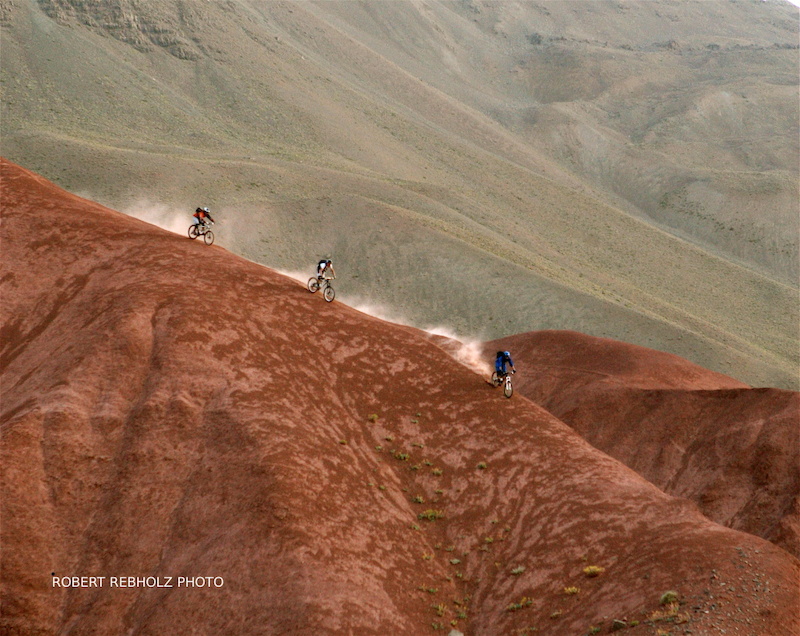 The next zone we rode, Region d'Amezri, was probably the most visually striking place I've ever been. The red dirt against the towering gray Atlas Mountains is something I'll never forget. The riding there was a lot like Southern Utah or Northern Arizona, specifically St. George or Sedona. 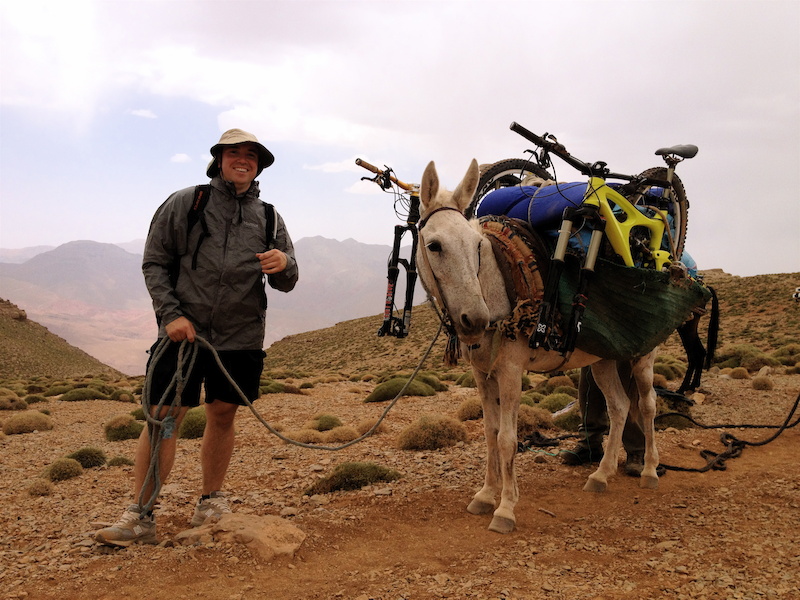 Donkey shuttles! Yeah, I was surprised too, but they actually worked out pretty well. To reach the remote Tarkeddit Plateau we had to climb trails to steep to ride and too long to carry the bikes on our backs. The donkeys walked at about the same pace we did on the six-hour hike, but never slowed down to rest as we frequently did. By the time we reached the top the donkeys were munching on hay and relaxing, the bikes already unpacked by the donkey drivers. 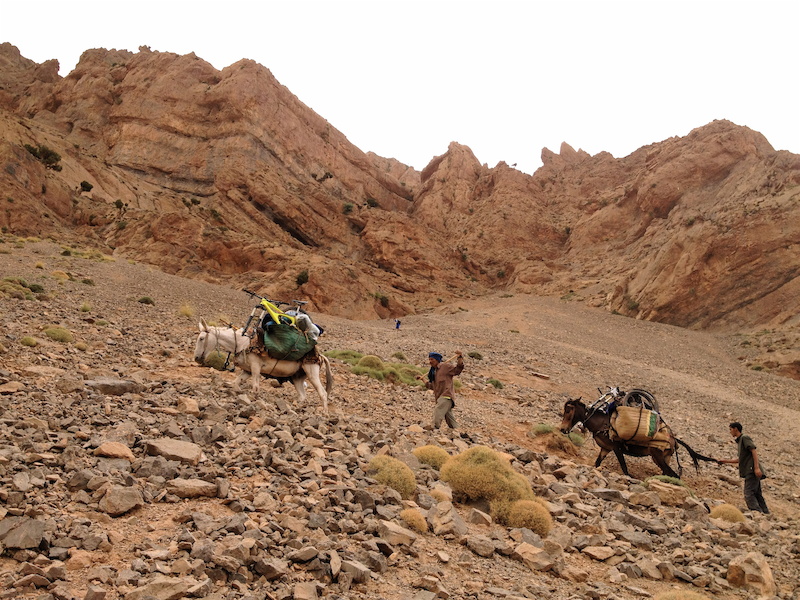 The riding on the Plateau was mind-blowing. We rode long stretches of buff singletrack, flowing singletrack and had some epic views of the rolling Atlas from our 11,000 ft. height. At the end of the day we stayed at a wicked stone refuge in the middle of absolutely nowhere. I've never seen brighter stars in all my days. 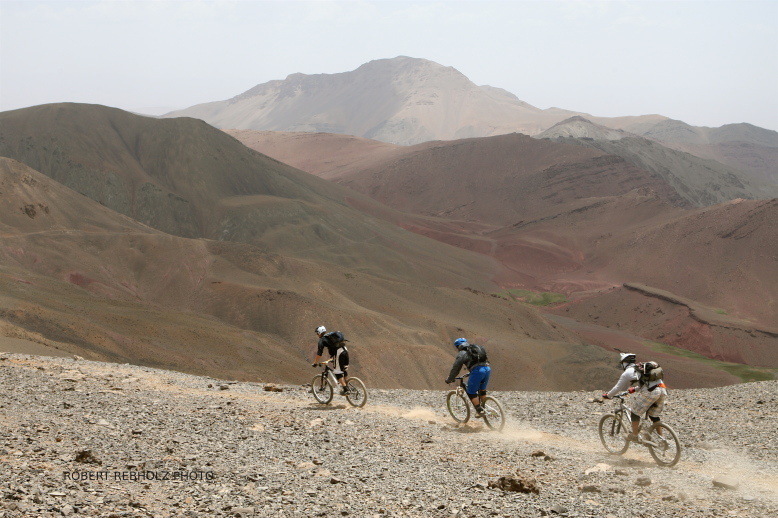 The next day we descended off the plateau and had even more fun. All of that hiking was worth it for the ride we had down into the valley. It seemed like the ribbons of singletrack would never stop unfolding before our eyes. 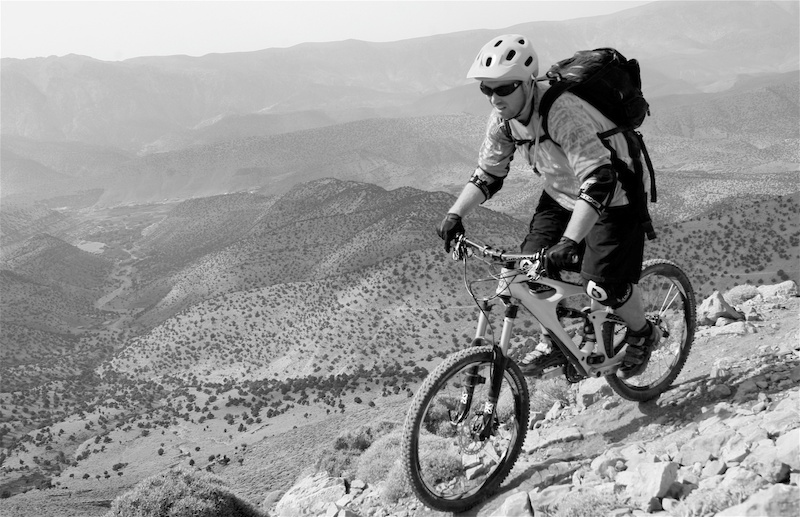 If you love enduro style descents and enjoy checking out new cultures, I definitely would recommend rolling with Exoride on your next adventure. I want to thank Kris for inviting me on this awesome trip and his partner Hassan Bouhrazen for organizing everything. Big thanks to Alban Aubert for keeping my spirits up during those big day hikes and our guides Redouan and Mohammed who took care of us like family while we were in Morocco. I also want to give a big thank you to Hans Heim at Ibis Cycles, John Hauer at X-Fusion, Scott Boyd at the Hayes Group, Dustin Brady at Shimano, David Parrett at Thomson, Colby Young at ODI, Suzzette Ayotte at Fizik, Yarrow Dougherty at Lake Shoes, Erik Hauge at Dakine and Dave Watson at Sombrio for material support for my trip. Last, but not least thanks to Jeremiah, Colin and all of the guys at Bert’s Bikes & Fitness in Tonawanda, NY, who help keep my rigs running right. 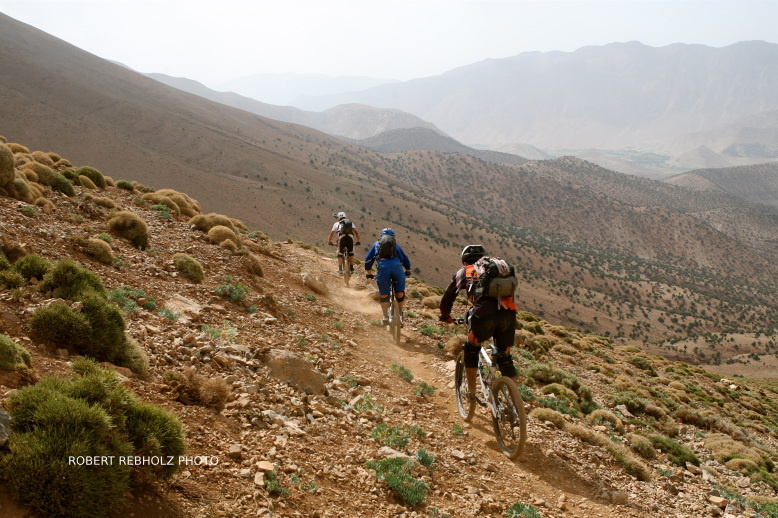 Check out this video put together by Kris of our Moroccan adventure:

spannersandhammers (Dec 22, 2012 at 4:54)
lookin at the shite weather outside only wants me to be there even more. Who,s up for abandoning xmas and going to morocco instead. Bollocks to santa

Exoride (Dec 22, 2012 at 10:03)
Hi. You can join us during the winter for an other enduro trip in Morroco... www.exoride.net/en/trips-vtt/maroc/25-enduro-casbah.html (google translate powered ! ) No mules for this one but same kind of incredible singletracks and scenery. Perfect weather, perfect people... you're welcome !

reverend (Dec 22, 2012 at 0:26)
My French is weak (read non-existent save for those words with clearly common roots) but I didn't see a listing of the cost for such an escapade. I'd love to do something like this, but also want to know how long I'd have to save to make it a reality. Sans airfare would be the most helpful.

robertbbr (Dec 22, 2012 at 8:08)
There is an icon at the top of the exoride.net with different flags. Tap the English one and it will translate it for you. Thanks!

HairyPotter (Dec 24, 2012 at 11:17)
I'm actually leaving for 2 weeks in Morocco right after Christmas! Unfortunately it's for an abroad intensive course and I won't have time (or a bike) to ride

reverend (Dec 22, 2012 at 0:25)
My French is weak (read non-existent save for those words with clearly common roots) but I didn't see a listing of the cost for such an escapade. I'd love to do something like this, but also want to know how long I'd have to save to make it a reality. Sans airfare would be the most helpful.

dzdh (Dec 22, 2012 at 4:23)
C’mon! Did you really have to use a donkey? So, where is the whole mountain biking spirit? It was not a race or anything like that, so get real , you were just traveling for fun, leave the poor donkey alone and put your aSS&$ and legs to work for god’s sake.

robertbbr (Dec 22, 2012 at 8:10)
Like I said in the article. It was six or seven hours of steep hiking per day for 10 days. Much more efficient to save your energy for the ride down than waste it hike a biking for that long of a time.