Join Pinkbike  Login
Introduction
Until May 2011, the North Shore, the birthplace of free-riding, a network of trails contiguous to a metropolitan area of 1.5 million people had no guidebook. Sure there are websites with online maps, sites that aggregate GPS information and trail information and some maps (eg the Cove Production maps and the Seymour NSMBA map). But there is no one single resource that ties this all together.

One look though at online forums whether here on Pinkbike or on other venues and you will find many of the same questions again and again. Where do I ride? Where can I rent a bike? Where/how do I even start?

Wade Simmons and Sharon Bader have put together a guidebook that will go a long way to filling this knowledge gap. 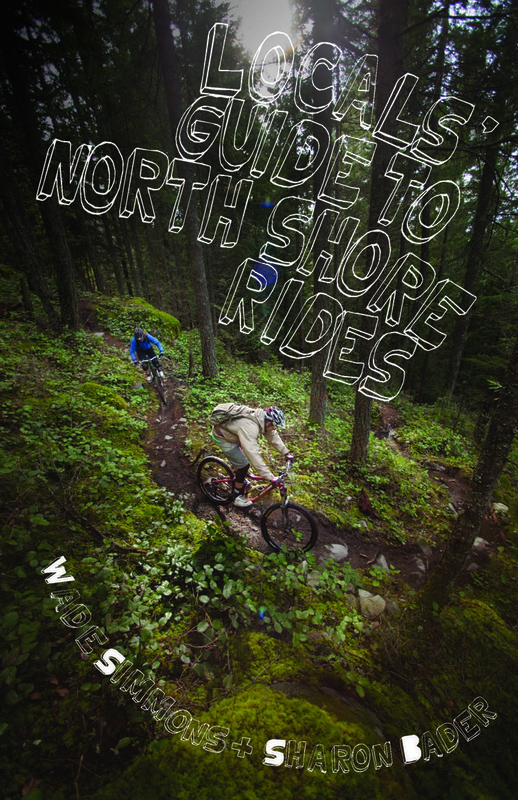 Cover of the "Locals' Guide"

Not many other people could have put together such an undertaking. Wade needs no introduction. He can ride all these trails and then some and has been around almost as long as everyone. Sharon's been the tireless behind-the-scenes advocate for Shore biking. President of the North Shore Mountain Bike Association for 5 years, she knows all the builders, all the trails and more importantly, knows what to put in and what to leave out of such a guide. 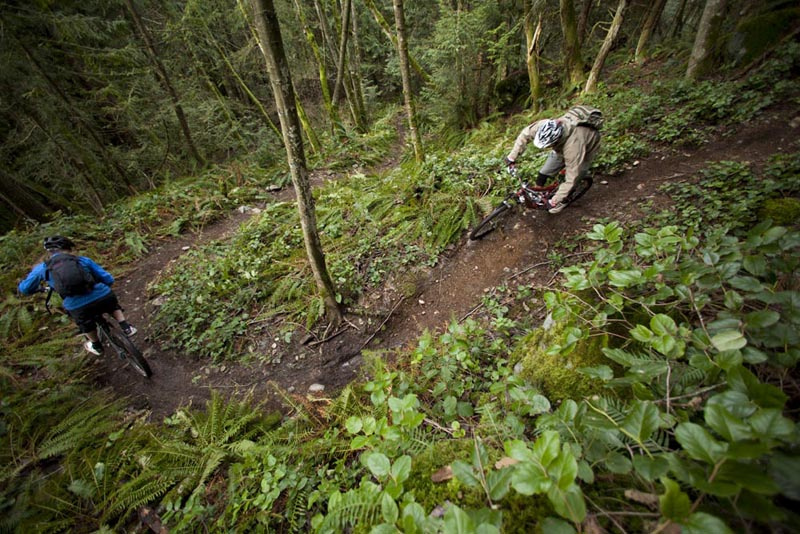 Sharon and Wade on "Upper Tall Cans" - Cypress. Didn't know there was such a trail? Buy the book!

The book is replete with an astounding amount of detail. The major trail areas of Cypress, Fromme and Seymour are described. Maps are abundant; there are general overview maps which are then expanded into detailed maps. GPS points are given to help navigate as are trail descriptions. Many locals take navigating the trail system for granted. Although there are signs, there are also many unsigned intersections and it's easy to get lost. This guidebook might just help you find the trails that you'll want to ride. 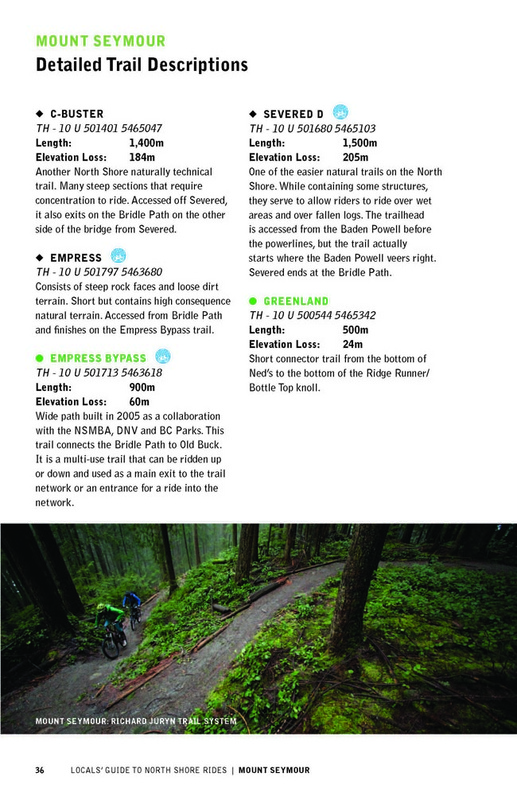 Sample trail descriptions describe the character of the trail. Didn't know there was a Greenland? Buy the book!

The "Locals' Guide" also contains suggested ride descriptions ie. routes recommended as starting points for exploration by Wade and Sharon. Often you might not know that there are ways to link trails in the system so that they logically flow. Or you might not know that "Sticks and Stones" rides more downhill one way and uphill another. Or you might not know that "Dirty Diapers" is a nice variation to 'Neds". Or you might be a tourist who wants the one must-do shuttle run. Or even seasoned locals might not have heard of trails such as "Tall Cans", "Greenland", "SGS" or "Pull Tab". The Locals' Guide won't give you every possible detail, but it will go a long way to letting you learn what is out there and start you on the baseline of exploring and finding out these gems for yourself. 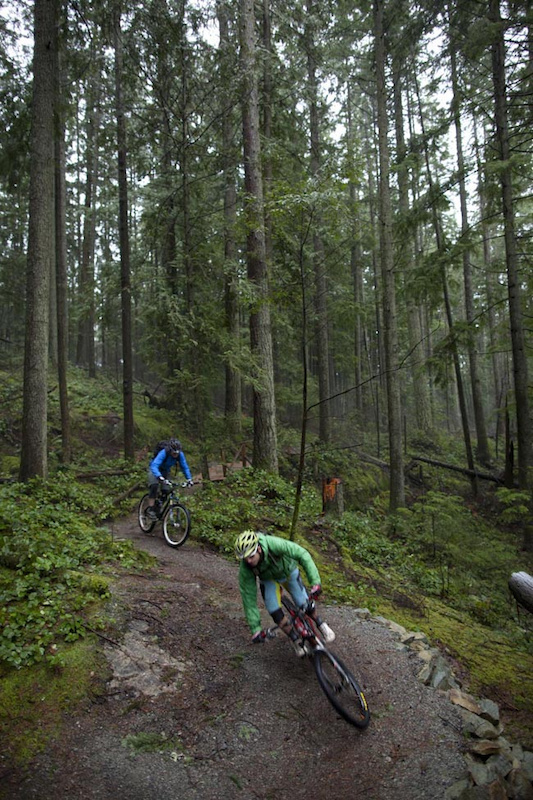 The Richard Juryn trail is part of the xc trail system in the Seymour Demonstration Forest. 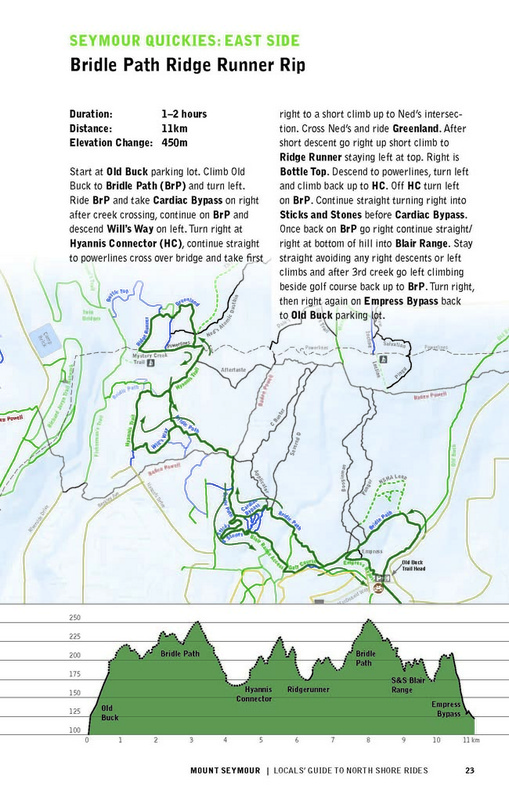 No article about Shore trails would be complete without a shout out to the tireless builders. From the Locals' Guide foreword:

A shout-out must also go to all the trail builders and volunteers who’ve
worked on North Shore trails. It’s impossible to thank everyone who has
ever built a trail or laid a shovel to dirt. Apologies if I’ve missed anyone
(you’ll know if you’re one of the doers and not just a talker). Thanks to
all the following in no particular order; Digger, Dean, Old Man Pete, PD,
Jeremy, theGiggler, BMB, SAB, Wilkez, Niggz, Dipper, dirty deeds, One
Eye, TSW, MuddBunnies, Knnn, Heckler, Ducati, Chris2, JW, the Family-
Guys, FOCM, bullit-kid, Karen, Knight-rider, Rat, MSG, Goat Legs, PH, SL, dawnchairy
Wilson & everyone who has ever come out to an NSMBA trailday. 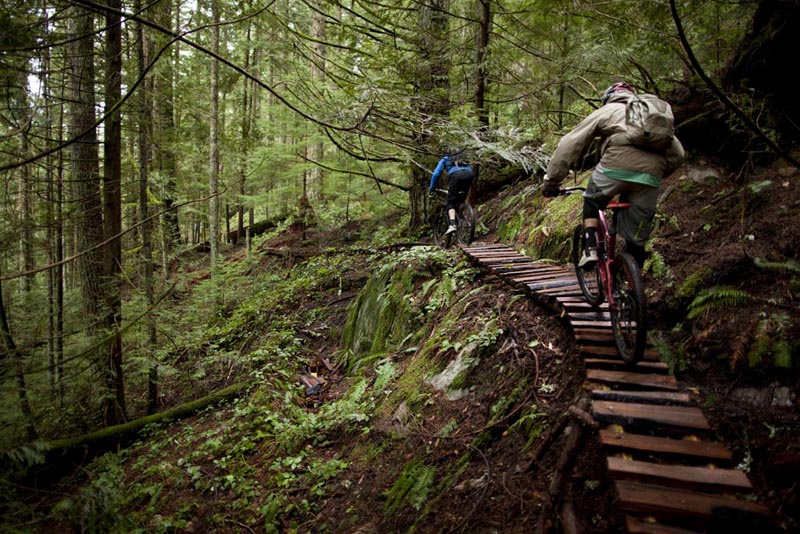 Wade and Sharon on SGS - Cypress. Never heard of "SGS"? Buy the book!

It is with that sentiment that the Locals' Guide" will be periodically donating to trailworkers. The first donation is a cash $100 donation to the "Aftertaste Crew" who brought "My Trail aka everyone-else-calls-it-Aftertaste-so-lets-just-go-with-the-flow" and many other trails into the world. Periodic donations will be made to local Shore builders/workers. 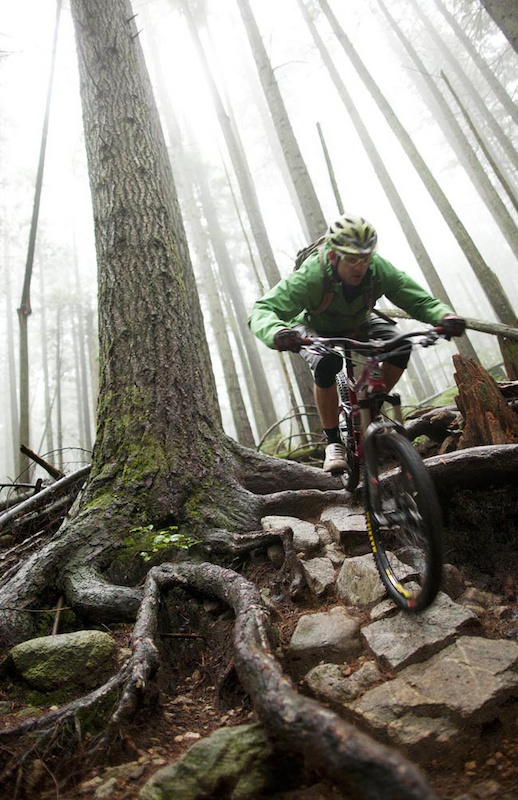 Wade on some greasy Fromme rock.

The "Locals' Guide to North Shore Rides" costs $24.95. 83 trails are described in 83 pages. 21 rides are suggested along with GPS and elevation profiles. The guidebook is printed on high-quality paper. It contains pictures kindly provided by Sterling Lorence.

Details concerning possible electronic maps, GPS apps and e-books are being worked out and will be announced. 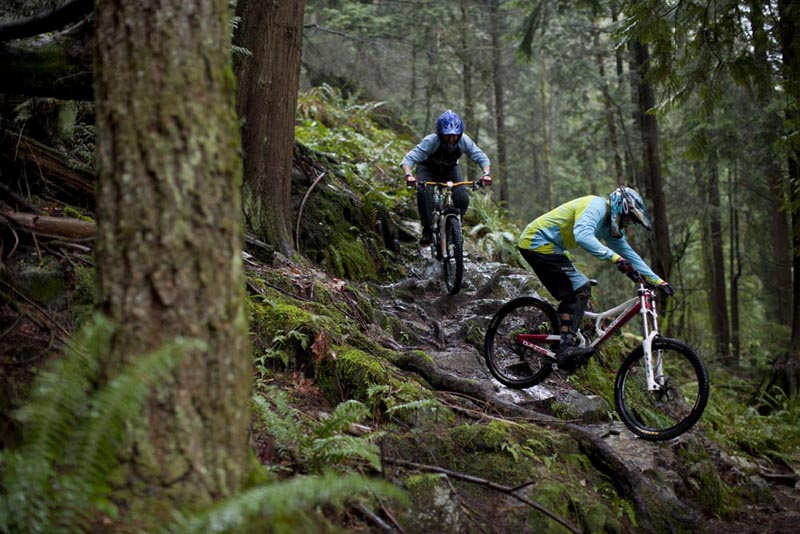 Wade and Sharon on Empress - Seymour

rip8569 (May 12, 2011 at 20:19)
This thread reminds why the mtb community is so great. If this were a book about back country ski stashes or secret surfing spots, people would be howling.

DJDefault (May 12, 2011 at 21:12)
Agreed. As a surfer and skier I know the tension behind locals and "outsiders" but I really just want everyone to have the same enjoyment as I get and push the sports. Anyone who comes out to cypress I will be more then willing to show them all the greatest trails... As long as they can keep up.

jmh7 (May 12, 2011 at 23:06)
For sure! A pow line can really only be skied once and a surf spot can get crowded quick. Trails are always fresh and you only take up a fraction of the trail's space at a time. The more the better!

Sharonb (May 13, 2011 at 9:07)
Issue with backcountry skiing and surfing is when you have people on top of one another when an area gets popular. pretty risky. Not much of an issue with a trail. Most of the trails on the North shore are over 10years old. They can handle the traffic!

nzstormer (May 13, 2011 at 12:23)
No kidding, when I first moved here from NZ and did my first shore ride I ended up walking most of it, first because I was scared, then because I went head first in to a rock and broke my helmet. A book like this telling me where to start was desperately needed while I was getting to know the shore. Even now 4 years later, I know Fromme quite well, about 1/2 of Seymour and barely any of Cypress - looking forward to expanding my options.

jcinkits (May 12, 2011 at 23:52)
FOR THOSE WHO CAN'T AFFORD A 'BOOK' OR WANT TO CARRY SOMETHING WITH THEM ON THEIR RIDES - map guides for Seymour / Fromme / Cypress have been readily available for years [ 10 years for Cove Productions ] - one is also free and handed out by MEC and TD Bank and North Shore Bike Shop; three others as well by Cove Productions, all with comprehensive and easy to read trail images of virtually every trail on those 3 Mountains - as nice as i am sure the 'book' is [ and to have ] i would rather spend $5.99 on a small water proof foldable map guide i can carry with me...in fact if you want to find ALL the trails on the Sunshine Coast, stop in at the only bike shop in Gibsons [ i've forgot the name ] and they sell an awesome map guide to more trails up there than you could ride in your lifetime...hope this helps.

wadevsimmons (May 13, 2011 at 6:59)
Great points you make jcinkits. The Cove Production maps are very good. We wanted to provide a product that's more detailed and with the suggested rides a little more of a resource for beginner/intermediate riders. And yes, it is a size that you can stuff in your xc jersey or easy enough to throw in the pack! At $5.99 per map per mountain, that totals $18, not too far off the "Locals' Guide" price and you don't get the sic Sterling photos and the detailed rides!

Sharonb (May 13, 2011 at 7:28)
The TD Bank/MEC Seymour maps was created by myself as an NSMBA project. I still have about 500 of them and they may find themselves in books sold through our website.

jcinkits (May 14, 2011 at 1:00)
hope i didn't give an impression one should not buy the book [ i hope to get it myself ] just thought to correct misinformation that there were no guides out there already, and still, a map is way smaller and lighter - having said that, i love the idea of pics and comments on the trails given in the book and i suppose one could always photo copy parts to take on a ride...room for all of them :-)

leelau (May 15, 2011 at 15:47)
jc - I thought that what I said in the first paragraph was correct and not misinformation. If you feel its misinformation could I have expressed it better?

"Sure there are websites with online maps, sites that aggregate GPS information and trail information and some maps (eg the Cove Production maps and the Seymour NSMBA map). But there is no one single resource that ties this all together."

jcinkits (May 15, 2011 at 16:45)
yep. my bad. not sure how i missed that - i believe i may have scrolled down without reading [thoroughly] and read comments of riders that did not know here maps for the Shore have been around for years - either way i will try to be more careful, and your intro was spot on...hope the book is compact enough for DH [ generally less is more ] and not just XC [ usually longer rides with less concern about carrying goodies ]

c25porter (May 13, 2011 at 7:16)
Building trails is hard work, I love to share the trails, as long as it is with someone willing to pickup a shovel. If you are just visiting, then it is understood, so long as you build at home and tell me about your trails there. Eat, Drink, Sleep, Build, Ride, Repeat!

We'll be picking the book up from the printer on Tuesday and getting them to the shops wed/thurs so they'll be available then!

You can preorder from pinkbike now!

redrider75 (May 12, 2011 at 16:22)
I grew up riding the shore but have been out of the country for the last 6 years. This will be a nice way to catch up on all the progress that has taken place since I left. Thanks Wade and Sharon!

robbeebee (May 12, 2011 at 16:29)
Very cool... Way to produce what looks like an awesomely detailed tutorial of one of the best mountain biking trail systems in the world.

dhphreak (May 12, 2011 at 23:47)
I'm a local and definitely interested. I keep finding great trails and never stumbling on them again. Problem solved!

steezejenkins (May 12, 2011 at 16:28)
hoprefully this will get my buddies to stop in vancouver like ive been telling them for years. instead of headding straight to whistler everytime.

singletrackman (May 12, 2011 at 20:17)
I'm going to buy my copy as soon as I can— my first few months of college in Vancouver just got a whole lot easier to navigate (or at least, the extracurriculars did...)