Pivot was founded on a series of successful dual-link full-suspension bikes that run the gamut from XC racing to World Cup downhillers and until now, there was no hardtail in the lineup. The 29-inch-wheel Pivotles (pun intended) is Pivot's first hardtail and it looks to be a winner, with a beautiful carbon fiber frame that can be converted into a single-speed with the addition of a clever interchangeable rear dropout system. Pivotles frames weigh only 2.5 pounds in the medium size and feature modern, technical-terrain-friendly geometry and a number of innovative elements that underscore designer Chris Cocalis' incessant quest for improvement. Pivotles frames cost $1999 and are sold in small, medium, large and X-large sizes. Colors are Orange or matte carbon with either red or blue accents. 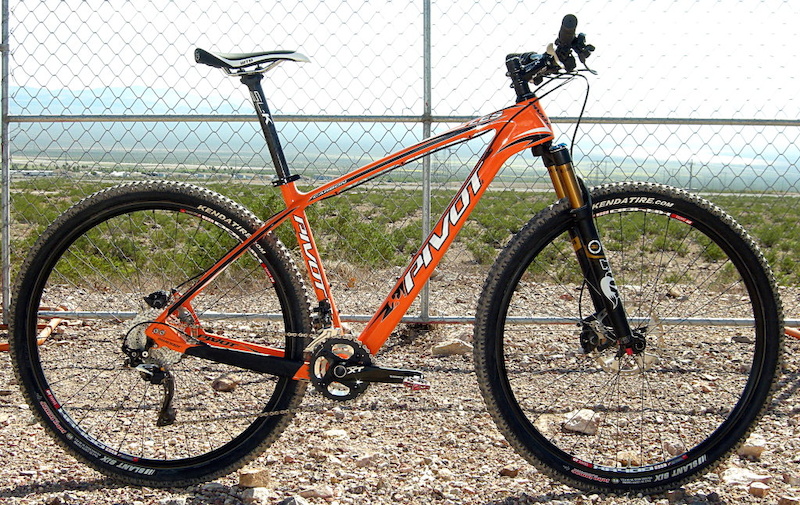 Pivot's first hardtail 29er features a carbon fiber frame with modern trail geometry and it is based upon forks in the 100 to 120-millimeter travel range.

When asked why a hardtail popped out in Pivot's carbon development program, Chris admitted that pressure from the brand's sponsored racers and loyal customers for a lightweight hardtail was mounting to the point where he could not ignore it any longer. Cocalis also nodded towards the Niner tent at Interbike's Dirt Demo expo area and mentioned that his nearest competition the big wheel marketplace was selling a lot of hardtails. Cocalis was quick to point out that the Pivotles was intended to fill the XC racing and performance XC-trail niche and, while its 69.5 degree head angle and short, 17.1-inch chainstays give his 29er a decided advantage in technical situations, it was not designed to fit into the rigid-rear-end, all-mountain category.

(From left) Pivot joins the internal cable guide movement with nicely sculpted entry points behind the sleek head tube junction. The seat tube widens considerably as it meets the frame's 92-millimeter PressFit bottom bracket. A look at the carbon fiber hatch that allows easy access to the frame's internally routed hoses and housings.

Pivotles frames feature internal cable routing to keep the profile clean and simple, and to ensure that the assembler and owner will not have to struggle with threading hoses and housings through the frame, a carbon fiber door is fitted under the down tube near the bottom bracket to facilitate that process. The front derailleur is a direct mount type, which keeps the shifting crisp, and a cover is sold in the $150 single-speed kit that also includes a pair of micro-adjustable dropouts as well as plugs for the derailleur housing holes in the frame to clean up the look of the bike. 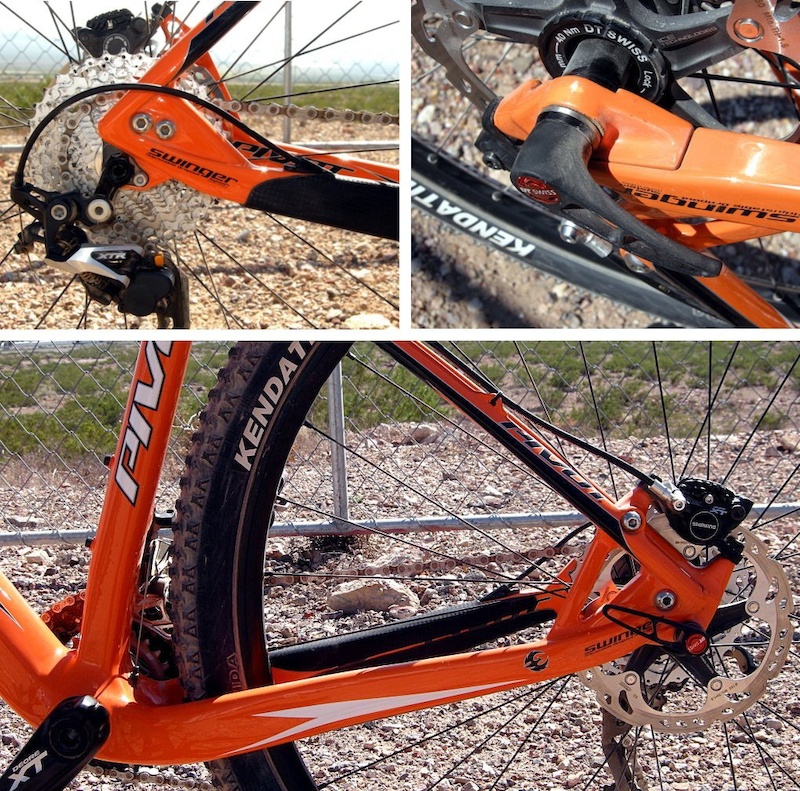 Three views of Pivot's Swinger dropout system, which employs a 142/12-millimeter through-axle. Two Allen screws fix the dropout to the frame. The dropouts set against the frame in two planes to ensure adequate stiffness. Note how the left-side dropout integrates the brake caliper mounts to maintain proper relationship with the rotor.

On the subject of single-speed conversion, Pivot has applied for a patent on its Swinger dropout system. The chain-adjustment screws are indexed with a detent spring that clicks every 90 degrees of rotation. The left-side Swinger dropout incorporates the brake caliper mount so that the brake always remains in alignment with the rotor as the chain tension is adjusted. Pivot did not have an example of the single speed option at Interbike's demo area, but the design looks good.

As mentioned, Pivot sells the Pivotles as a frame only, or as a complete bike in a number of build kits that range from $3799 to the top-drawer $6699 Carbon XTR ensemble. The most popular build, says Cocalis, is the $4999 Shimano XT/XTR option (Add $150 if you want the single speed dropout kit). Pivot will be shipping the new 29er to dealers this fall.

29er yuk yuk yuk
It's carbon, it'll explode when I ride and we will all die
100mm travel? pfft, I need AT LEAST 400mm to ride as hard as I pretend I do
Boring XC/lycra/people who ride this aren't as good as downhillers.

Cheer up kids, it's a cool looking bike and it's orange (the colour makes it infinitely cool anyway)!

El-Warpo (Sep 18, 2012 at 3:49)
My only complain would be the 2K asking price. A little steep for a hardtail frame, but I suppose there's a market for it. It's a very nice bike otherwise.

qbert2000 (Sep 18, 2012 at 5:31)
the 2 grand asking price is what scares me, not that it's carbon. that's crazy high, but of you're a racer it's another choice. intense, now pivot. small full suspension companies getting into the carbon xc game

deeeight (Sep 18, 2012 at 8:41)
@mnorris111... because outside of wannabee world cup racers, nobody BUYS them anymore. That's why most every brand is dropping them. Limited sales prospects does not encourage a brand to put something into production. Pro riders only use them because they're not having to pay for them thanks to sponsorship. Hell given how quickly many pro's shelled out of pocket to get 650B bikes going mid-season (with sponsor decals covering up what the frames really were, and permanent marker blocking out competing tire manufacturer logos), its little wonder manufacturers drop production models. Rocky Mountain ditched the 26" race hardtail models two years ago and it hasn't hurt them at all. At the local regional races... we're talking sport thru expert/elite level stuff, its a SEA of 26er full suspensions and 29er hardtails at most any start line. The only people still riding 26er hardtails are the ones who couldn't fit, or couldn't afford anything else.

LindLTaylor (Sep 18, 2012 at 8:47)
@mnorris122: The XC race mentality has largely moved to 29er because (generally) the performance benefits outweigh the weaknesses. Also, a little research goes a long way. My first look showed me that Specialized was releasing 26" Stumpjumpers as recently as the 2011 model year. Also, Lynski still offers their TI race hardtail in a 26" platform.

And if someone has never heard of them, given that they've been making titanium bikes for a couple decades plus now, then one needs to get out into the real world instead of the make believe one online.

For that matter, buy an Ibis Tranny. The geometry is VERY much XC racing, and in fact several world cup riders use them because the dismantling rear end makes it easier to pack and travel tor races with.

finnrambo (Sep 18, 2012 at 15:23)
why bother with 26 xc race hardtails? 29's advantage in that line outweighs the weaknesses completely, only application I can see is racing on fireroad but most places have the same tech as bc xc trails

#1 Not everyone comfortably fits on a 29er... hardtail or otherwise. Take emily batty for example, she's riding the smallest size frame Trek offers, and has to run a flat bar and a NEGATIVE TWENTY FIVE degree stem angle as well as running her seatpost TT style (so offset forwards) in order to get her body in the correct position to suit her riding style. She's 5'2" tall. Nino Schurter is 5'8" tall and didn't find them comfortable either, which is why he raced the season on a 650B Scott Scale (and won the world cup overall, the world championships, and took the silver at the olympics to boot). Now Emily could conceivably be running on a 26er instead, and probably should be on one at her height. Trek still makes one in fact, the 9 series OCLV hardtail.

#2 On many XC race courses, 29er hardtails actually aren't an advantage compared to 26er hardtails, or 26er full suspensions, either because the terrain is too tight/twisty or the technical challenge level is much higher. Catherine Pendrel won the MSA WC this year on a prototype full suspension 26er from her sponsor, which also makes 29er race hardtails.

finnrambo (Sep 18, 2012 at 18:27)
I see.. ya it does seem weird now that race 26 hardtails arent really made much anymore but companys follow trends

deeeight (Sep 18, 2012 at 20:24)
Except again, aside from short folks, and certain courses, 26ers are very unpopular sellers, especially high end racing hardtails. Rocky Mountain doesn't offer ANY 26er hardtails for 2013 above the Fusion, which is about $1k retail. In fact, there are I think a total of THREE 26" hardtails left in the catalog (fusion 26, flare, and edge). A manufacturer isn't going to offer a model that isn't likely going to be ordered by dealers in great numbers, and dealers don't like to order models that sit around all season unsold until they are forced to blow them out at the end of the year or something of that sort.

iamamodel (Sep 18, 2012 at 20:55)
I live in an area with ultra twisty trails - far twistier than anything I found on the North American West Coast. I can tell you after much testing of lap times that a 29er is faster than a 26er on a twisty loop, even on short sections of pure singletrack. In theory they are slower to turn, and on asphalt they are slower to turn, but in reality... just as fast. And I wanted to hate 29ers so much, but now I own a 29er hardtail for racing. And sometimes fun. All my hard core XC racing competition are ALL on 29ers now. Not because they are following trends, but because they are faster. I had to go to 29er hardtail as I was letting down the teams I race for. mnorris122, get a 26er HT, a 29er HT, and a stopwatch or Strava or whatever and do some testing. I do agree with deeeight that 29ers are not for all body sizes, but if you can fit on one and you need to go fast, get on the program.

Spearman (Sep 18, 2012 at 2:26)
I nearly died when i saw "while its 29.5 degree head angle and short, 17.1-inch chainstays give his 29er a decided advantage in technical situations" Mmmm 29.5 degrees must be very confident inspiring. HAHA

goonrider (Sep 18, 2012 at 2:55)
step back in time alright, heres an early proto!
www.instructables.com/image/FRZ7TO0FT182T7J/Budget-Chopper-Bicycle.jpg

To me, Pivotles is pronounced Piv-o-tles, the tles being the same as at the end of the word turtles. Not Pivot-les or pivot-less.

oldschool43 (Sep 18, 2012 at 7:55)
I wonder what the rider weight cutoff is? 2.5 pounds is road bike light. Add the extra length tubes to make it a 29er. That's got to be really thin walls. It's really cool, not for me, but cool anyway. Nice dropouts and the trap door is cool. I worked with a kid that tried to replace cables on a Klein Atitude. Could have used the door, "Is that what the clear tubing was for?"