Join Pinkbike  Login
The 2010 Red Bull Rampage has just wrapped up, and the king is Cam Zink. 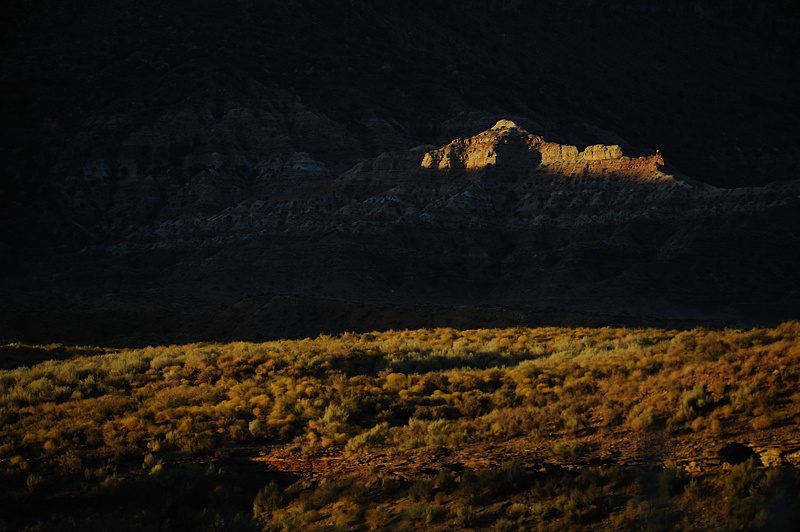 First light on the morning of the finals. Let's get ready to rumble! 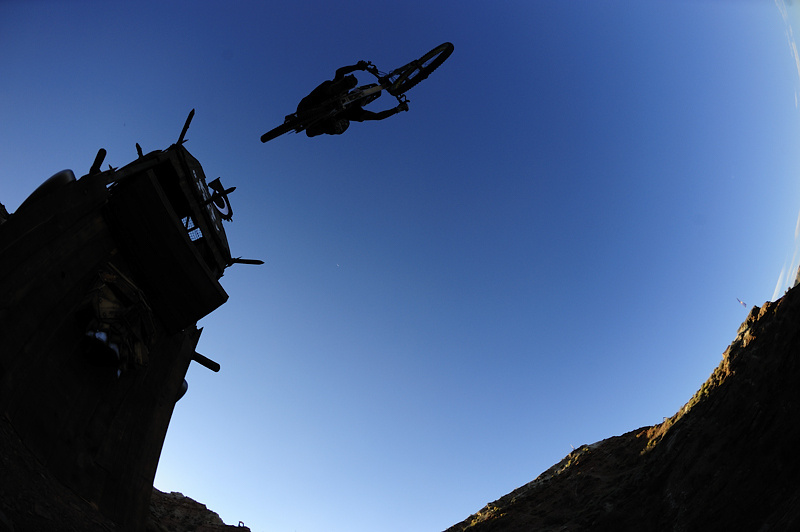 Not your average morning practice...Andreu Locondeguy starting shit out right with the Oakley Sender. 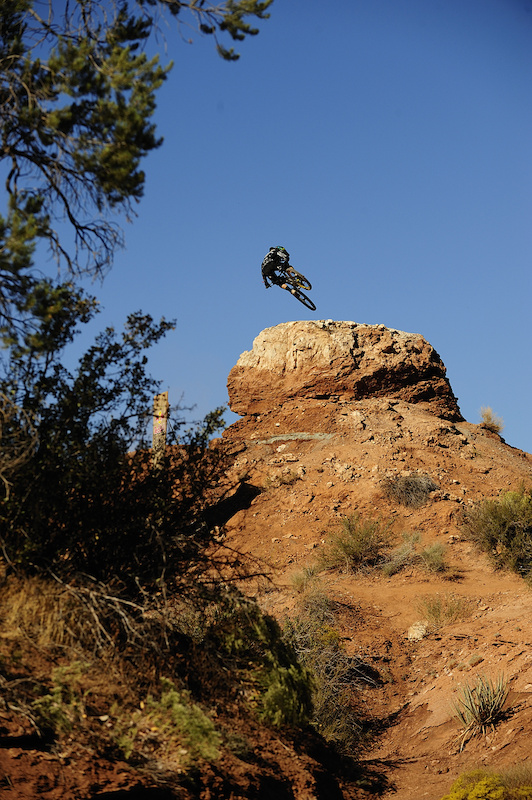 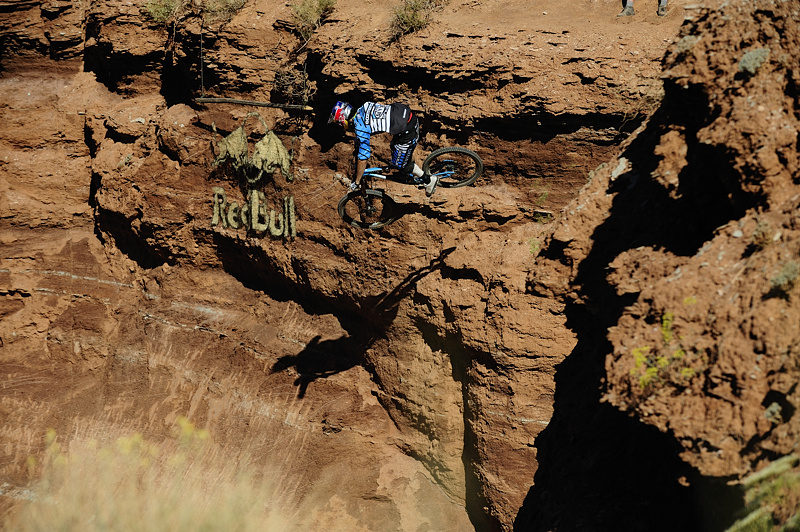 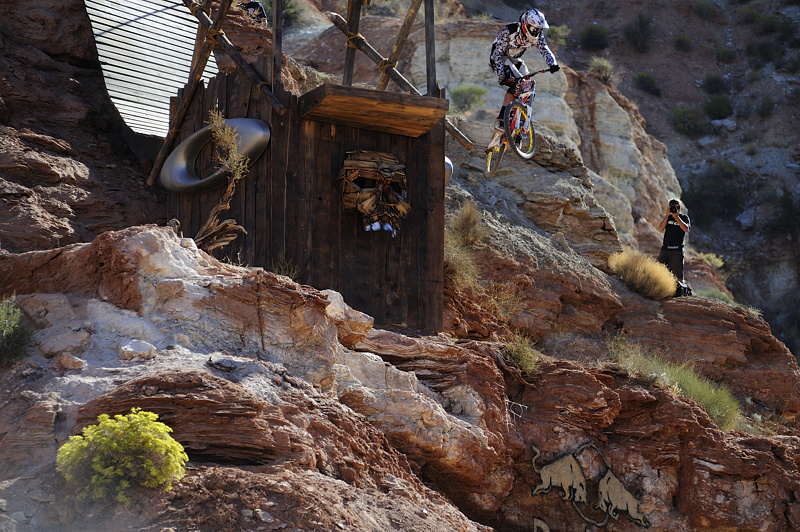 Cedric Gracia, looking pretty damn smooth for an old french dude. Blame it on the wine and women. 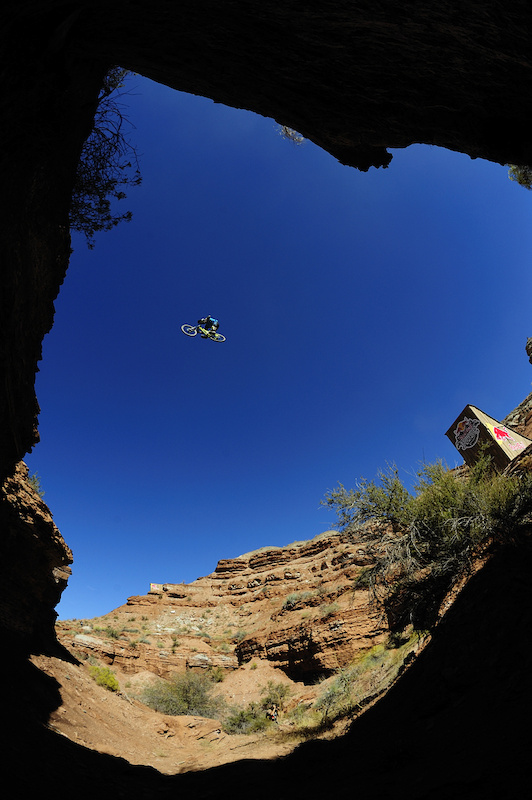 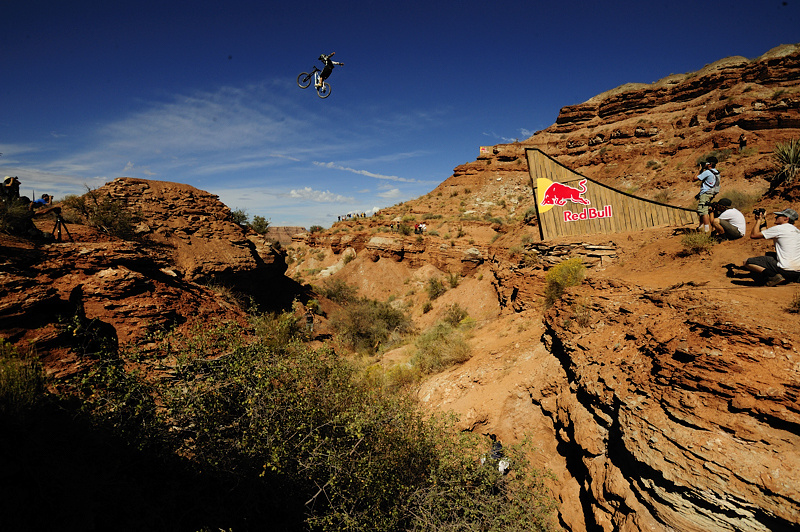 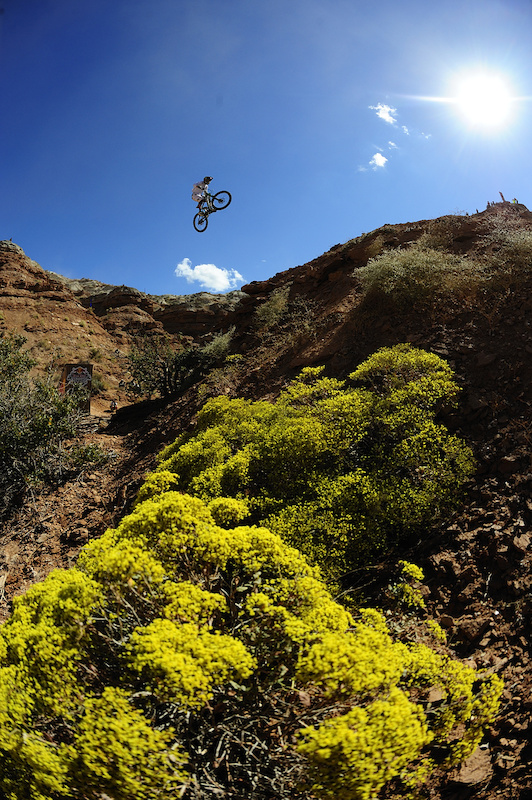 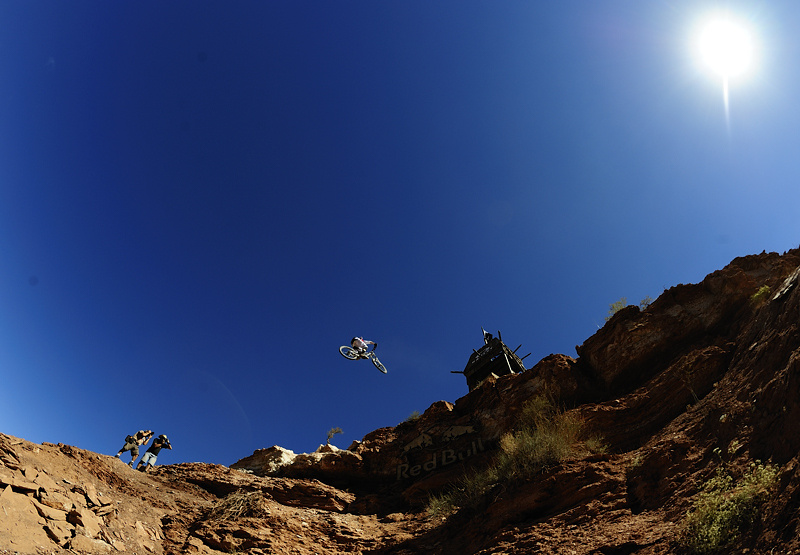 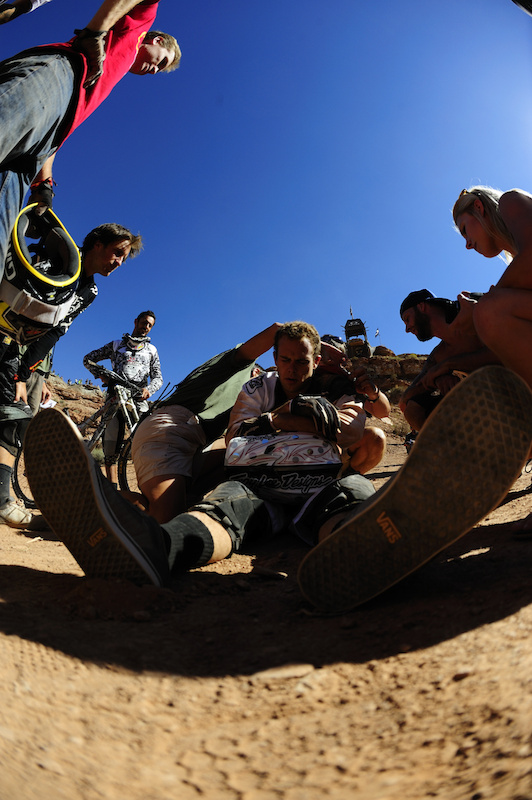 Cam Zink after his first attempt at three-ing the Oakley Sender. 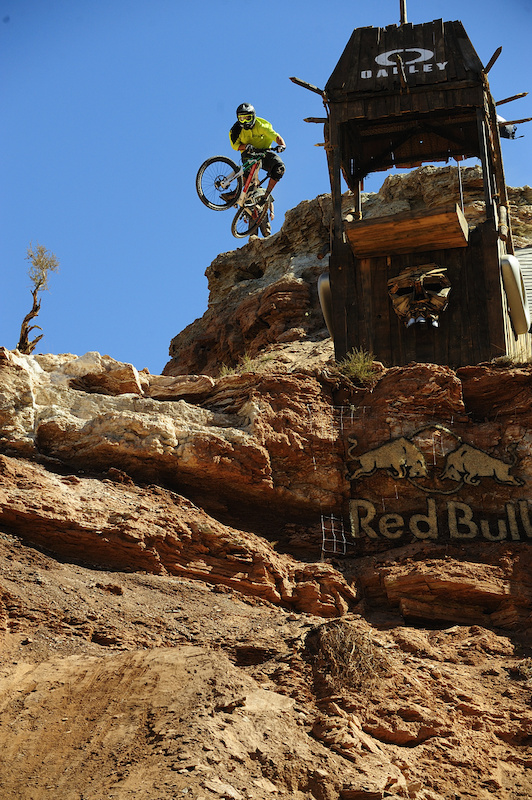 Gully's Oakley Sender air, followed by the biggest and longest lasting backflip off the gap after the Sender I have ever seen. 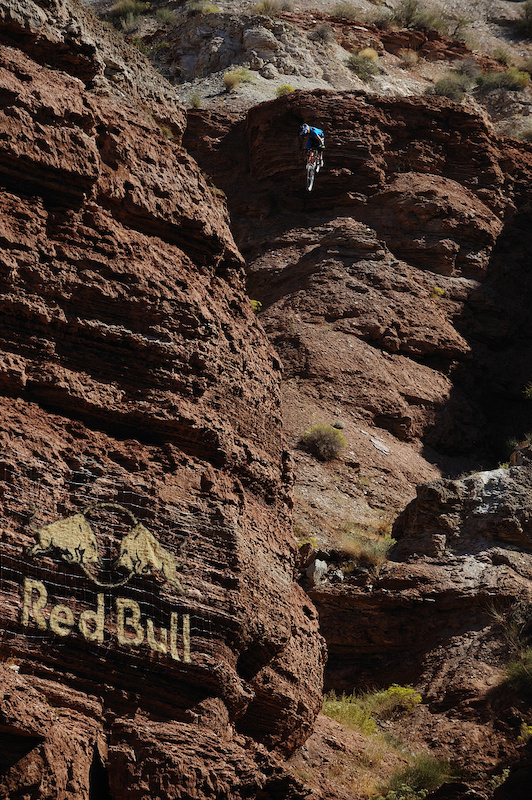 Darren Berrecloth is so damn burly. 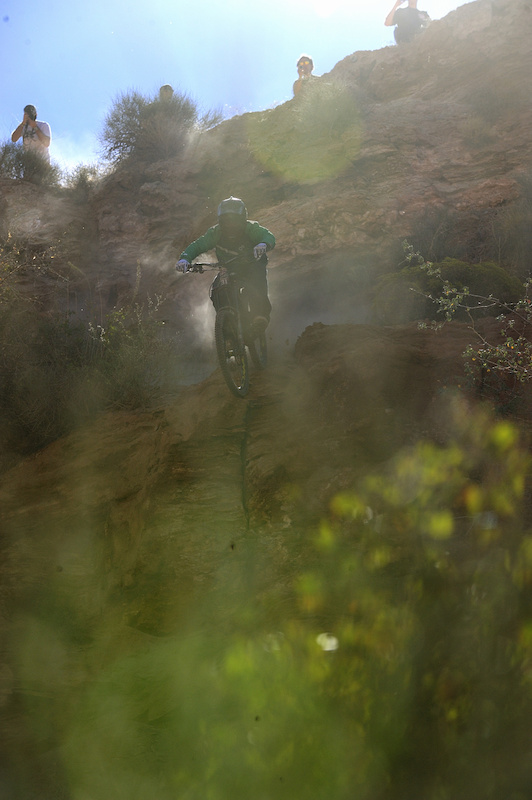 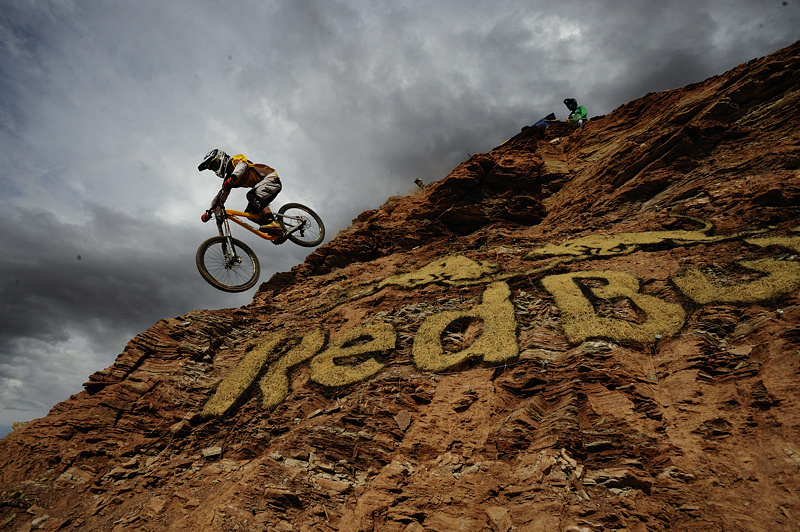 After waiting for two hours in rain, wind and generally psychotic weather, the finals continued off the second start zone. 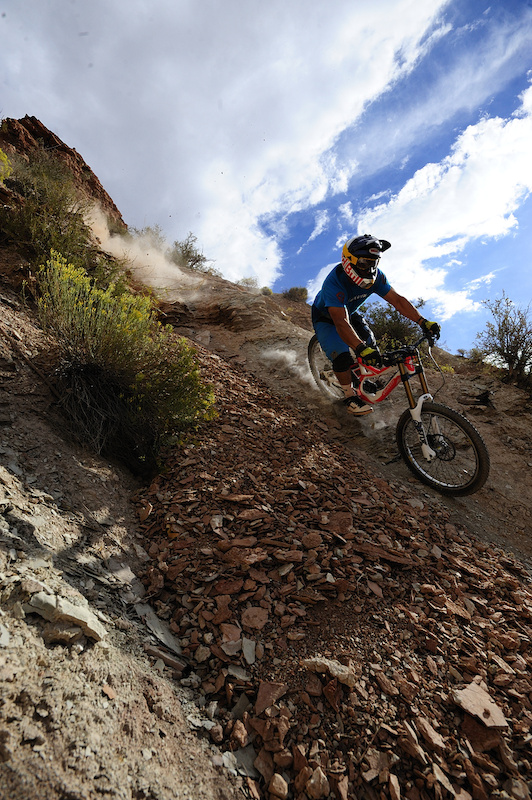 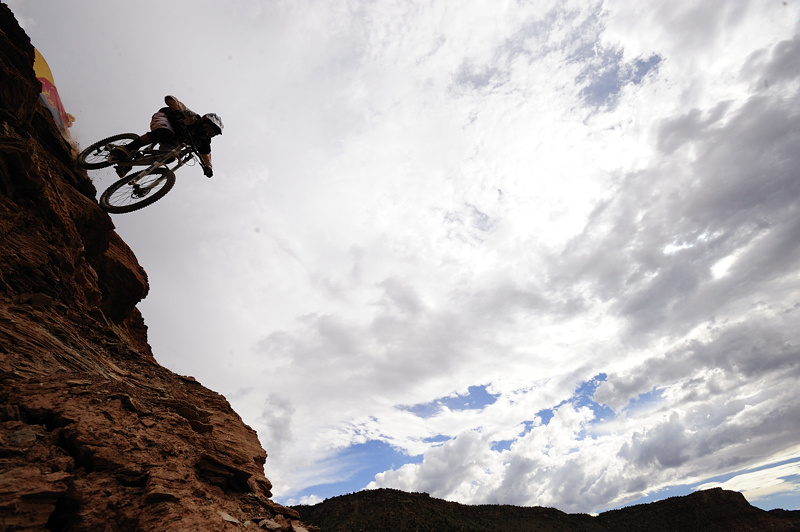 In the end it was Cam Zink's big successful three off the Oakley Sender that firmed up his win and best trick of Red Bull Rampage 2010. 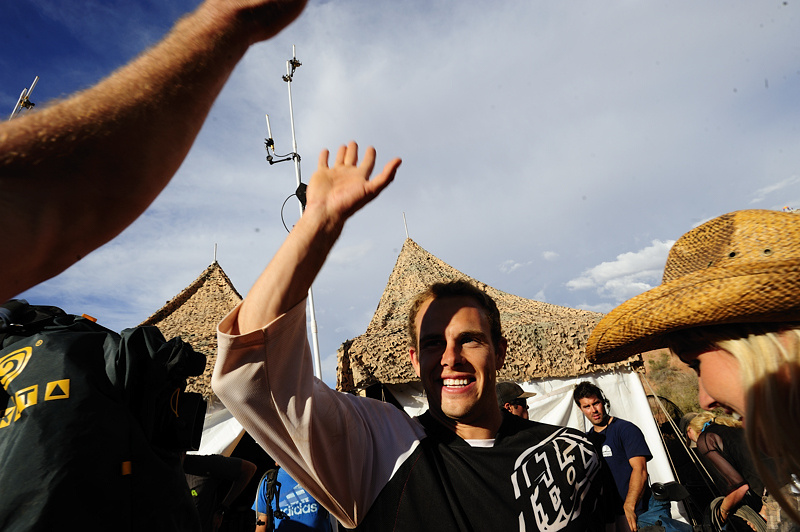 Yea Cam. Sounds like you had a good year. First at Crankworx, the first at Red Bull Rampage. You 'da man. 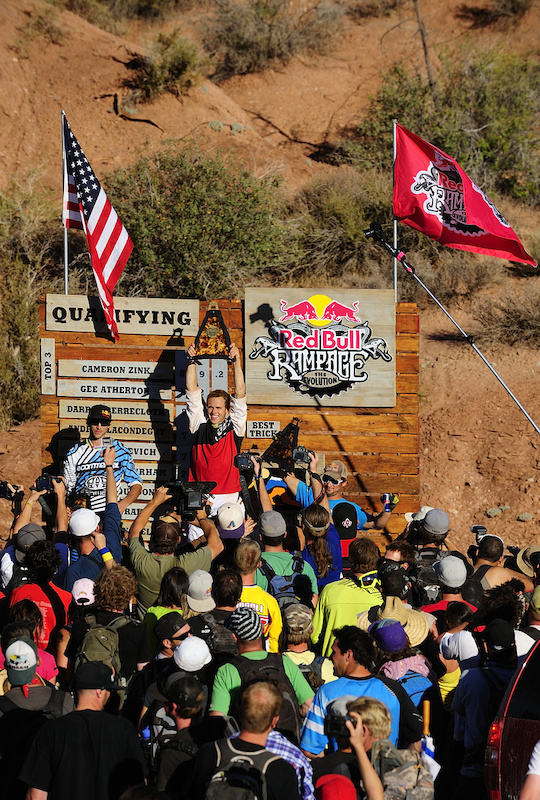 brycepiwek (Oct 3, 2010 at 21:16)
If anyone deserves to have a great season with a big win at crankworx and now rampage; its cam. after all his injuries/knee reconstructions over the years and he's come back with a vengeance. way to go Cam!

p-romano (Oct 3, 2010 at 22:33)
Its sweet to see this sport progress like this. Just like in the last year noone would even consider 3-ing anything that huge let alone hit it. where will this be headed in the next few years? EPIC!!!

joeljsh (Oct 4, 2010 at 7:03)
i liked darren's run more, he probs wouldve run first but he lacked in 2 of the major areas, FLOW AND CONTROL but still that was sick

passmethebud (Oct 4, 2010 at 9:31)
darren was good but had nothing on zinks run and also why isnt there a pic of that massive 3 off the oakley sender?

FlailingChimp (Oct 3, 2010 at 21:34)
I dont know how Atherton got second not tricking anything. Should he have gotten a high score, yes. But I think his score was a little exaggerated. Bring on the neg props.

radarr (Oct 3, 2010 at 22:25)
I kind of agree. Props to Cam - that 3 was crazy. Especially after he crashed so hard the first go around. He definitely earned that Best Trick award. That being said, I still think Darren should have won. Like The Claw said when he was waiting for his second run score: Is it slopestyle or big mountain they're scoring?

EDIT: Don't get me wrong here - I was screaming at my computer when I saw Zink land that the second go around. It was f*cking awesome to see the level of riding get pushed that much.

RedShredder (Oct 3, 2010 at 22:31)
I dunno man. The speed Gee carried the entire run was incredible. No one else had the same and flow as Atherton. He literally looked as if he was attacking a world cup downhill course except it was RAMPAGE. I think Cam rightfully won, that 3 was the real deal. In my eyes Gee earned second without a doubt.

no-ah (Oct 3, 2010 at 22:51)
i think the judging was a bit wank. as radarr said cams 3 was sick but... that was it. i think darren should have got 1st he pulled some crazy shit. he had the most tech big mountain line, pulled some cowboy super human shit and still threw in a banger 360 at the end. such a well rounded run that got judged so shitty. nothing u can do now

i was screaming when i saw how they judged him.

snook (Oct 4, 2010 at 3:31)
I thought Vanderham, Aggy, Gully and the Claw were robbed. Vanderham was the only guy to cleanly trick the canyon gap, Aggy's run was sick to watch, same with Geoff's, and what can you say about Bearclaw's insane fucking screw up to 1 foot ride down a near vertical dh line. I guess he lost fluidity points for stopping at the end.

fooby (Oct 4, 2010 at 5:11)
I think The Claws run was allot better than Zink's overall for the insane technical stuff, but Zink definitely deserved the win for that insane 360, The Claw should have been second though. I reckon you might be right about him loosing points for stopping, I was shouting at my screen when he was running out of time getting photos haha.

davidcunha (Oct 4, 2010 at 3:59)
Zink made history, Gee flyed down his line and the Claw had a real big mountain line. 1,2 & 3 great runs, but i'm real happy to see a MONDRAKER on a huge freeride event and Lacondeguy landed an excelent 4th place on his first rampage...

goldengarbageman (Oct 3, 2010 at 21:33)
Cam's three was sick, but Berracloth takes it for pulling out of that mistake at the top. Unreal, that was some superman sh*t. And Bourdon's flatspin three attempt was so large.

bigdan30 (Oct 3, 2010 at 21:51)
so did zink win the fmb world tour then? i'm guessing he must have, with bearclaw close behind. i missed the last few runs though...anybody know where i can watch bearclaw and bourdo (and others...)?

leon-forfar (Oct 3, 2010 at 23:07)
well right now semenuk still sits in first, claw is in 4th i tihnk, and zink is in 6th, but this is without rampage. they havent updated it yet including rampage. itll be close between all 3 of them i think

leon-forfar (Oct 4, 2010 at 16:16)
i just checked it out, zink JUST managed to squeeze by semenuk by 10 points or so to take the number 1 spot for the year, semenuk is second, and claw is in 3rd. super close! i wonder how it would have been if semenuk was part of the contest

suraj (Oct 4, 2010 at 9:02)
Gully did super well, stayed consistent with his line/trick choice. He did pretty well considering the field...

fullbug (Oct 4, 2010 at 7:58)
i was really hoping Bourdon would stick that flat spin. truly just go for it kinda riding with him. amazing.

vt6spd (Oct 5, 2010 at 3:50)
I am surprised no one tried a double back off the Canyon Gap. That would have made history and won the comp hands down.