Flowing rivers, epic mountain views, untouched valleys and trails developed over centuries, the Swiss Alps offer everything hikers and bikers could dream of. However, the trails of the Alps were not enough for Ramon Hunziker. Back from the Red Bull Rampage in Utah, he searched for what every mountain biker desires: freeride lines on steep untouched hills. This brought him and filmmaker Roger Wegmann to terrain yet to be accessed by mountain bikers until now.

Utah, Whistler and Kamloops... These are all places associated with freeride mountain biking. Every year, thousands of bike tourists travel to North America and follow the footsteps of pioneering freeriders. Dreaming of the perfect conditions in the woods of British Columbia or the sands of Utah, these riders tend to forget what lies outside their own front door. Ramon Hunziker, a member of the Flying Metal Crew, resides in Thun, Switzerland, the gateway to the Swiss Alps. After Ramon was given the honour of being a part of the legendary Red Bull Rampage, he decided to take a break from travelling for the summer. Instead, he spent his time in search of the ultimate freeriding experience at home in Switzerland. 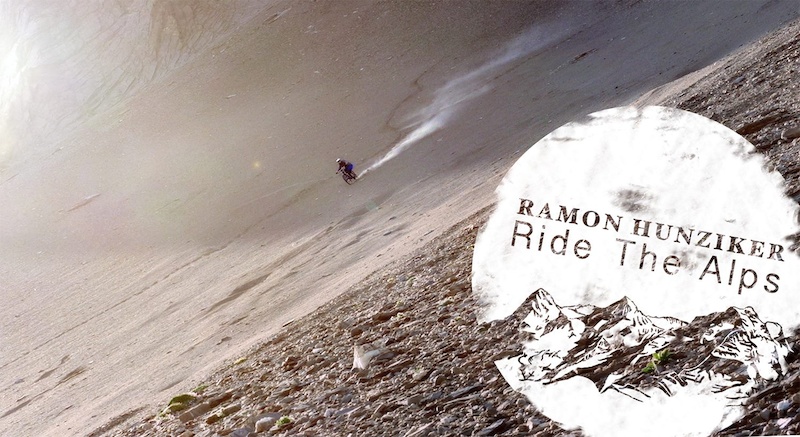 Ramon found his search more difficult than expected. Switzerland is different. While the riding in North America is often on soft terrain or even sand, the ground in Switzerland is hard pressed and rocky, filled with stones. Not the ideal conditions for riding a steep 45 degree hill. Braking is often not an option and many lines do not have a proper exit. Building large jumps and drops, due to strict regulations and the high population, is not allowed. Ramon’s goal therefore turned into finding places to ride where you can use the natural terrain creatively without building big jumps. Another barrier was the lack of mobility within the Alps. Because of driving bans on logging roads, another mode of transportation had to be found to access hidden areas. Hard to hear and harmless to hiking trails, a trials bike was the perfect solution. It allowed Ramon to make his way into untouched territory. After weeks of computer surveying work and long rides on the trials bike, he found locations that matched his expectations. However, some were in the high mountainous areas, vulnerable to rapid weather change. A number of locations on the list were at elevations that were too high and already covered with snow by the beginning of fall. 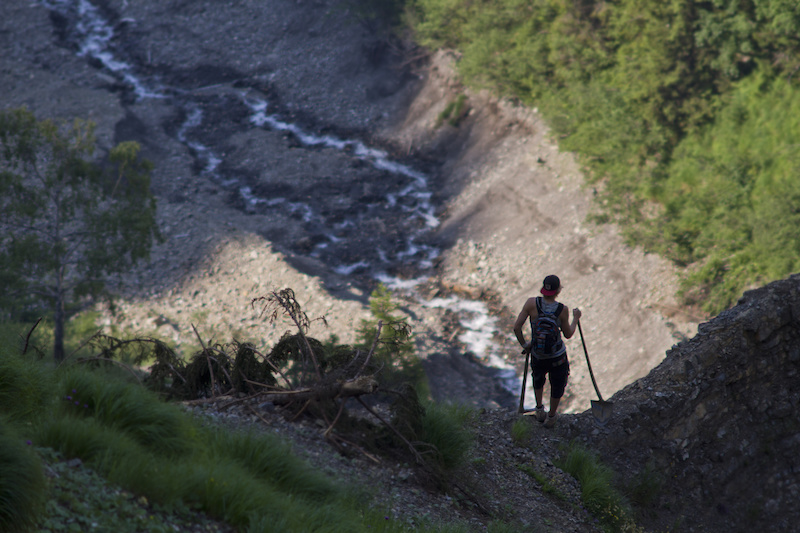 However, after Ramon had located some workable terrain, he was accompanied by filmmaker Roger Wegmann. In order to take advantage of the most beautiful hours of the day, and to save themselves from long drives, Ramon and Roger camped in the mountains. Many places where they stayed took hours of hiking to access. Filming in the mountains was risky and dangerous; many locations were steep and exposed. Additionally, the shots had to be taken close to the action putting Roger in the line of flying and falling rocks. Except for the smashing of a GoPro, nothing serious happened but he admits, “I was usually quite happy to walk and climb the hills, instead of riding down them with a bike.“ 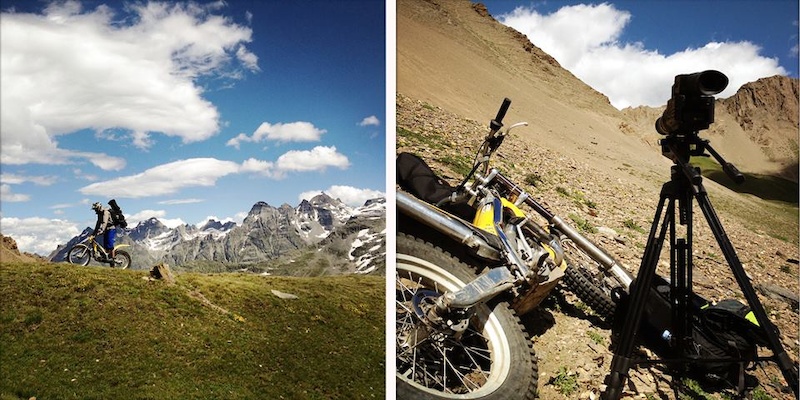 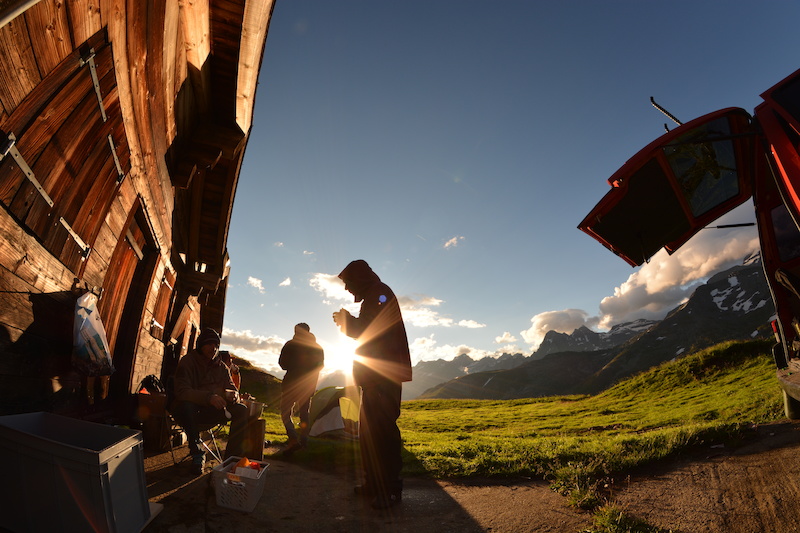 Locations in North America, Argentina, China, Tibet or even Afghanistan have been scouted and filmed for freeride lines in the past. As a country where every second citizen names mountain biking as their hobby, now more than ever, Switzerland is up and coming on freeride filming radar. World changing? Not necessarily, but according to Roger, “It’s not all about doing something no one has done before.“ Lots of great films focusing on downhill, trail riding and dirt jumping can be found on the web. “We wanted to develop new terrain in Switzerland, without the infrastructure of bike parks, and explore the possibilities of the Swiss Alps.“ 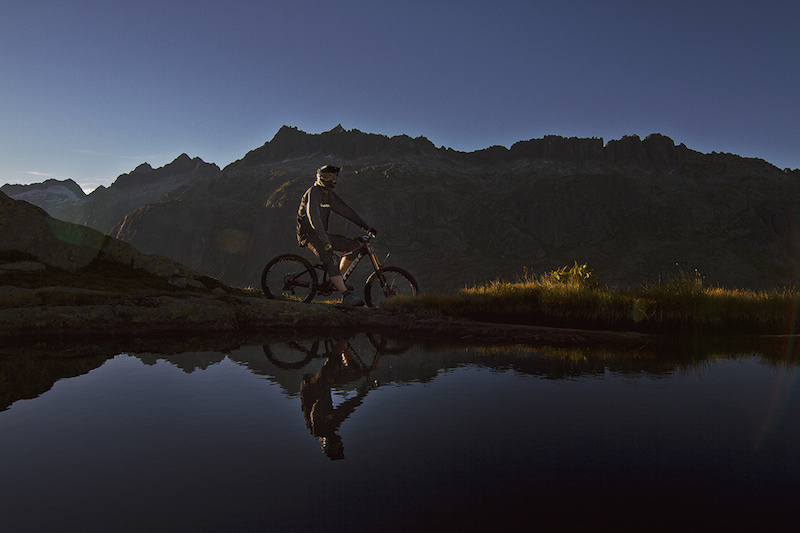 The result: A ten minute long low-budget film. Inclusive of not only adrenaline pumping action shots, the film displays countless incredible nature shots showcasing the pristine beauty of the Swiss Alps. For Roger Wegmann, this film offered the opportunity to see his home in a new perspective, “Out of habbit, we often forget the breathtaking sceneries the Alps have to offer.“ For Ramon Hunziker, the results were both satisfying and refreshing, “When I finally found some simply amazing lines I could hardly believe it; real freeriding in Switzerland!“

Film brought to you by: Dakine and AEK Bank

For information about the Flying Metal Crew check out flyingmetal.ch

TrinityTest (Dec 15, 2013 at 3:29)
It's because it's a YouTube video and YouTube stop mobile playback on videos with copyrighted music because they can't monetize them.

dimitrisz (Dec 15, 2013 at 2:04)
Awesome video, locations and riding!!
Looking at the spots, makes me think of some fantastic locations we have at my country as well, check out Caldera Santorini
goo.gl/QgGQ4V
goo.gl/iRp3Qu
there is even a cable car
goo.gl/JIT7E4
Will love to see some day somebody riping this Caldera Volcanic ash to the sea.

DirtyDee (Dec 15, 2013 at 3:37)
Great video. I love these steep rock/shale lines a la Doerfling and Buehler. I wish we had some of this type of riding around where I live, or maybe i jut need to go on some more in depth scouting missions...

I am kind of disappointed he didn't give that first line another go to ride it clean to the bottom though.

j-sctylez (Dec 15, 2013 at 9:18)
so sick, so much creativity here with checkin out new landscape in their territory, cant forget the great shooting. those skiing slow mo shots, primo!!