Now who says BMXers and mountain bikers can’t be friends?

The other day I was filming a BMX event with the Etnies crew for Rip TV and I had the pleasure of meeting Ruben Alcantara. Anyone who has ever met Ruben or seen him ride will probably tell you that he is one of the most influential and talented guys to ever ride a BMX…but nobody told me that before I met him and all I knew about him was that he was a really down to earth, nice person who was more concerned with having fun and living life to its fullest than making people know he is a superstar of his sport!I was invited to ride with their crew at the Kirkstone skatepark in North Vancouver that evening and I jumped at the offer knowing that it’s not everyday you get to see that level of riding go down in your own backyard! My ride turned into more of a watch/oogle at the crew blasting huge out of the quarter pipe and in between making everybody’s jaw drop, Ruben mentioned to me that he really wanted to try mountain biking on the North Shore. I’ve BMXed for a little while now and in my time on the 20 inch I’ve never heard anyone say they wanted to try mountain biking, so when Ruben made his request I was pretty surprised…and pretty stoked! 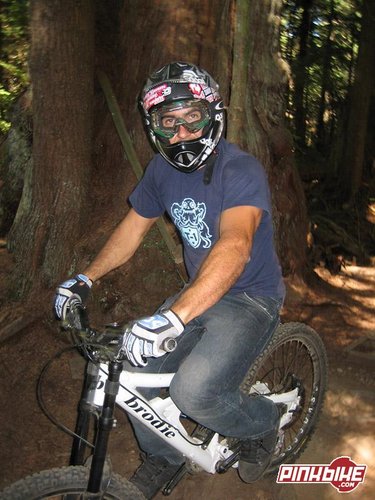 In a matter of hours Brodie Bikes hooked him up with a pimped out Brodie Devo, I dug up a spare full face and googles, and he was set to ride! After meeting Ruben at his hotel for breakfast, I shoved some croissants in my hoodie (thanks Holiday Inn!) and we headed up to the base of Seymour to ride the most typical “North Shore” trail I could think of: CBC. After piling 4 bikes onto the rack of my poor Toyota Echo, myself, Ruben, Harookz, and my boyfriend Shaun were on our way! 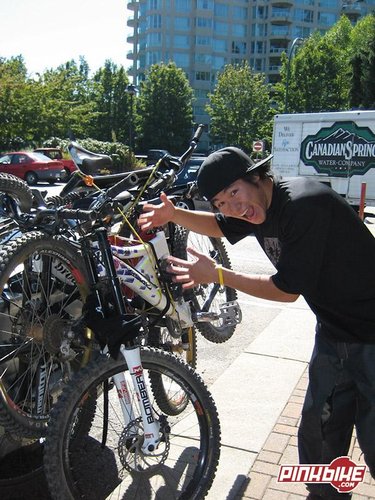 Within seconds of Ruben hopping onto his Devo we all knew he was going to have no problem transferring his street skills to the trail. I’m still wondering how he could bunny hop a DH rig so high?? First stunt in Ruben looked in his element. He cleared pretty much every skinny on the trail until his chain broke a few minutes into our run…and then he continued to clear everything that was left (including uphill skinnys!!). Harookz offered to give him his chain but Ruben refused and was able to pump everything as fast as we rode it with our chains on! I’ve always aspired to be as smooth as possible when I ride but it was amazing to see how EVERY root, rock, and depression helped him to accelerate. It looked so cool that we all started pumping the trail and stopped pedaling! 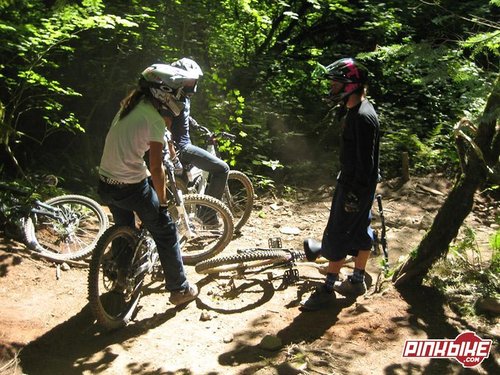 Needless to say, we were all stoked and very inspired and by the end of the run we were all exhausted but with huge smiles on our faces. Despite the initial near death experience, the ride was a success and Harookz took a bunch of pictures with his party cam so that Ruben could send his friends back home to make them jealous! Ruben was pumped and couldn’t stop saying how happy he was. I received thank-you emails for two days!

After slaying the North Shore, Ruben was itching to ride jumps on his big bike, so there wasn’t really a better place to take him than to the jumping trail of all trails: A-line. We headed off to Whistler and in true mountain bike style Ruben double flatted on the first run after the first jump. After a quick flat change we headed up for round two and by one run down Ruben was pumped and ready to annihilate the trails. Hundreds of jumps down A-line, Dirt Merchant, a few Boneyard session (where Ruben jumped the biggest jumps on the course first try) and four mechanicals later, we were wiped and ready to fall asleep and dream of trannies again. 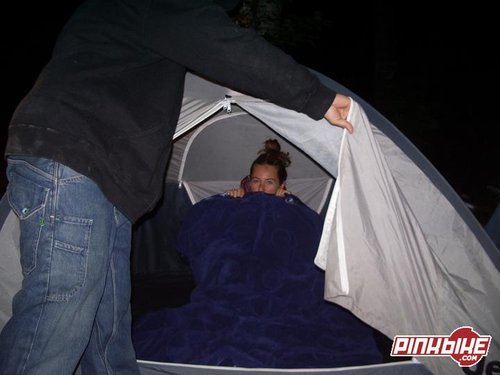 You’d think a pro like Ruben would be more inclined to stay in a resort but instead he was stoked to camp out and so we met up with Shaun and Harookz in Paradise Valley where they had sniped what we thought was a pristine campsite by the river (the next morning we woke up and realized that there was garbage everywhere!). Like usual Harookz was the prepared one and set us all up with tents but I dropped the ball when I forgot several important kitchen utensils for the BBQ and assumed that I would be able to blow up the double air mattress by mouth. Oh well, we survived. 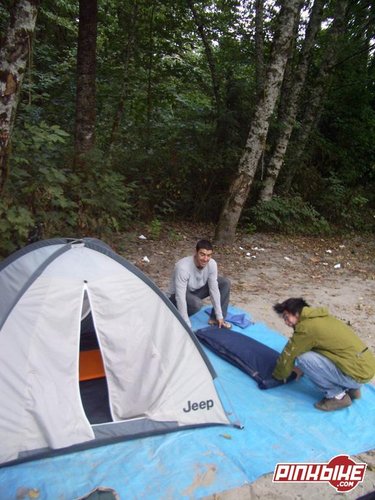 The next morning we were ready for round two at Whistler. Harookz had his party cam braced and ready and this morning it was a bit colder so I decided to do my runs in the world’s ugliest eagle sweater from Ecuador. Our warm up run down A-line coined my run the “flight of the eagle” but alas, the eagle was forced to land next run when the sun decided to come out and ruined my steeze. Harookz and Shaun insisted we went up Garbonzo next run and so Ruben and I followed even though all we could talk about was riding Dirt Merchant. A few jumps into Freightrain things got ugly when Shaun cased a jump and crashed in front of Ruben and Harookz and caused a pileup. I kept going because I didn’t hear anything but when they came down it looked like Shaun took the brunt of the carnage with a bloody shin and possibly broken hand. He was okay, so like the “no friends on a powder day” mantra, Ruben, Harookz, and I took off and mached down the rest of Freighttrain. 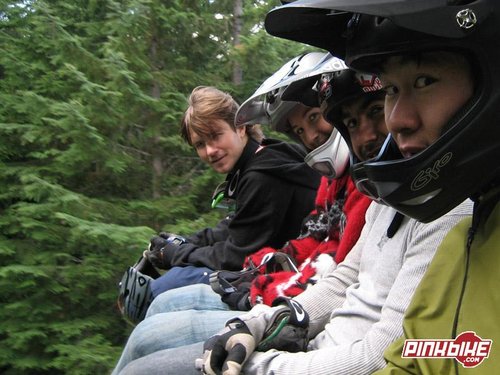 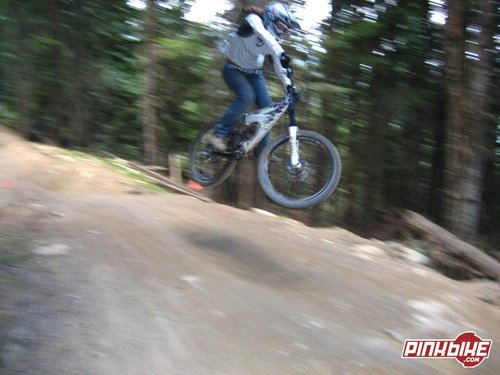 Yet another day of jumps was bagged as we headed back to Vancouver stoked as usual, but instead of hitting the showers, we headed to the skatepark to watch the Etnies crew ride BMX. Ruben, the ultimate coach he is, decided it was time for me to join in and ride the full-pipe bowl with his bike. I was a little hesitant at first but when Ruben Alcantara jumps into a bowl with you and says it’ll be alright, you have to believe him! It turns out he was right and it felt so good to get that high in the bowl and ride his pimped out T1…I’m definitely riding more 20 inch this winter!

So as it stands now, Ruben can’t wait to ride mountain bikes more, and I’m craving skate bowls all the time now. I think that just proves that no matter what size your wheels are, riding a bike is a passion that can’t be shaken by those who do it for the love. Learn it from the legend…just bike and be happy.

Oh, and all photos are from harookz's party cam.