Join Pinkbike  Login
Rolling into Whistler for the Crankworx Festival the Syndicate’s ranks were a bit decimated as three of the four riders arrived injured. Kirt Vories, headlining the Santa Cruz Syndicate All Ride Demo Tour, was medicated during the week, as he was fresh out of a surgery to plate together his collarbone, an injury he suffered while filming recently. Jamie Goldman made the most of the week training and doing photo shoots as his broken hand was still on the mend. It was just not ready to handle the big drops
that the slopestyle course had to offer. Steve Peat was nursing a broken big toe, but was fine enough to meet the demands of a packed schedule.Nathan Rennie had arrived weeks ahead of time and had been racing and filming (he placed 2nd at the Psychosis downhill 2 weeks before). Rennie spent days filming with Tony Butler and Clay Porter. Then he and Peaty filmed for 2 days with Bjorn Enga for the film PROGRESSION, due for a premiere at the Interbike. 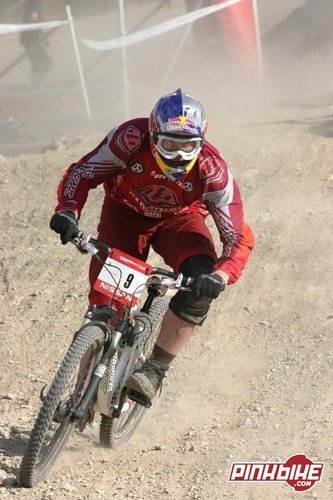 “The much-anticipated addition to the very successful Kranked series, PROGRESSION - Kranked 6 gives the world’s best mountain bikers a challenge: To create the most stunning and progressive mountain bike line and ride it. Imagine some of the top riders, Steve Peat, Nathan Rennie, Kirt Voreis, Jamie Goldman,…. It is about finding the ultimate trail - and pushing the boundaries to ride it.”

Highlights from the week of racing action for the Syndicate were the results from the Garbanzo Enduro Downhill. Rennie rode in for a fourth place finish with a time of 15:18.4, just 4.4 seconds back of winner Sam Hill on the long, demanding course.

Peaty’s busy schedule had him due in Vancouver for a Rip.TV talk show interview on Sunday evening. In order to make it on time, his run was slotted in before the pro women which worked out perfectly. His time of 15:17.0 held up for a second place finish, just barely edging out Chris Kovarik with a 15:17.6. 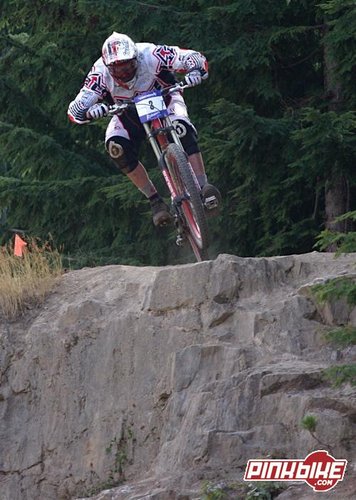 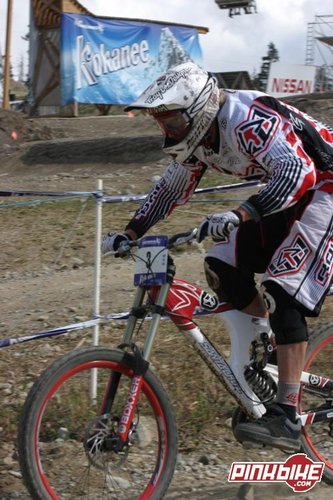 Steve says, “After a flat out week traveling and filming, it was good to get to Whistler and finally do some riding. I had fun and the race went well, although I did have a small crash on one of the wooden bridges. The course is pretty technical at the top, then rain made the roots slick. It has a little bit of everything: low speed tight trees, fast open sections, jumps, and it is really fun to do. It’s hard to know how to race such a long course. You can’t redline it the whole way or you will blow.”

Before Peaty even knew the outcome of his efforts he was off to Vancouver with the Syndicate boss, former pro skateboarder Rob Roskopp, for their Rip.TV talk show interview in front of a live audience. Rob answered questions about his former career, and then Peaty made his entrance to the stage on his Santa Cruz V-10 for his interview. 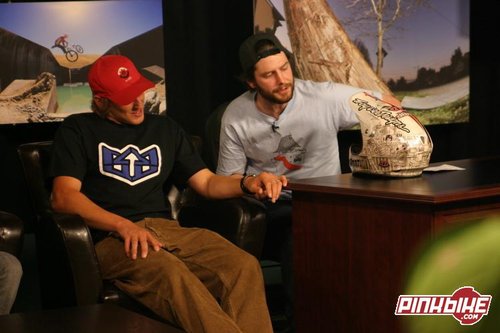 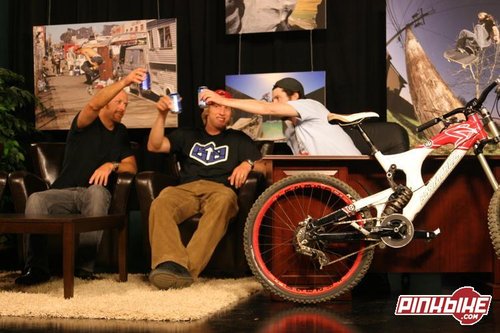 Up next for the Syndicate is the World Championships in Rotorua, New Zealand Aug.21-27 for Rennie and Peat.
Goldman will compete at Monster Park Aug. 19-20.
Vories will keep his demo tour rockin’. Check out the link to his schedule to see if he will be coming to a shop near you:


All and all it was a great week and the Syndicate is on the mend!

Thanks to the Syndicate sponsors:

Tweet
Must Read This Week
The SwitchGrade Will Allow Riders to Change Their Saddle Angle on the Fly
60548 views
Pinkbike Poll: How Important Are Water Bottles?
54462 views
The 20 Top Pinkbike Comments of 2020
52202 views
Throwback Thursday: The 12 Best Saves of 2020
51291 views
Colorado-Based Myth Cycles Releases the Zodiac: A US Made Steel, Single-Pivot, Full Suspension 29er
47377 views
[Updated] Remy Morton Injures Both Of His Arms in Crash on Dream Track
44004 views
Check Out: Carbon Tire Levers, Flat Pedal Shoes, New Mini-Tools, & More
43805 views
Opinion: How True is the 'Dudes Who Shred' vs 'YouTubers' Meme?
43129 views