Join Pinkbike  Login
Crankworx is a great event for the Santa Cruz Syndicate athletes to regroup mid-season to race and play together. Santa Cruz sponsored rider, Bobby McMullen has joined the Syndicate for the week and has been thoroughly entertained so far by the characters in the house. He can't see them, as he is legally blind, but he sure can laugh at their stories. The Crankworx competitions have brought this crew together this week and they all rode the mountain today.Kirt Voreis had a blast playing in the dirt jump park this morning, then on A-line in the afternoon. Jamie Goldman was just back on the bike for some casual runs as he is just coming off of a back injury sustained after Colorado Crankworx. And the gang is really missing Steve Peat, as he is not in attendance here due to dislocating his foot last week. 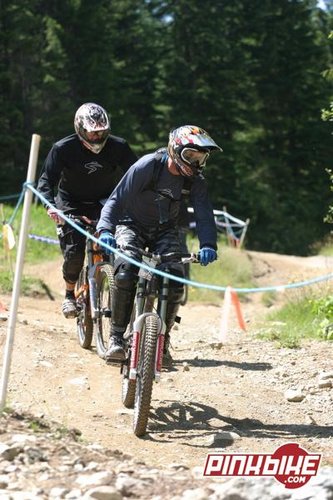 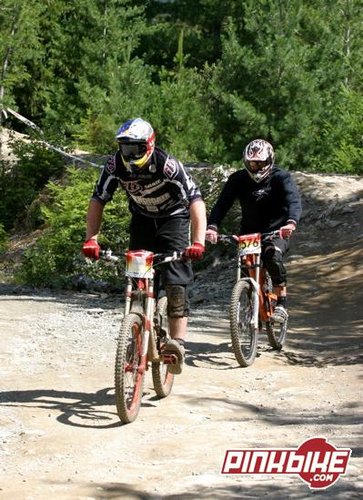 Today was downhill practice for the A-line downhill race which is tomorrow. Bobby was guided by Syndicate mechanic, Doug Hatfield, for a few morning runs. After lunch, Nathan Rennie guided Bobby for a few practice runs. After his practice runs with Rennie he said, " We unleashed the hounds a few times on that run! I even caught backside on some of the jumps!"

Bobby is very excited to race tomorrow, and Doug will be his guide.

psikodelikz (Jul 27, 2007 at 17:01)
I had the pleasure of meeting him (and the rest of the WTB/SC team) down at the Spring Thaw DH race in Ashland, OR back in May of this year. He was a great guy and a true inspiration to the rest of us. Anyone who has the passion to ride this stuff, while not ever being able to enjoy its pure tortuous site, like PCL said, is a hero to us all.

northwestdhdad Plus (Jul 25, 2007 at 20:17)
SC Bikes should have a contest next year- "Guide Bobby" at Crankworxxxx, I'd enter it! I would love the chance to take that man down A-line, A HERO TO ALL!