Join Pinkbike  Login
The Santa Cruz Syndicate Allride Tour has completed its first round of exciting stops! From the end of April to the beginning of August, the Allride Van has logged over 12,000 miles and has been host to a wide variety of bicycle enthusiasts.

We managed to make it home with the demo bikes still in tact, but our fearless commander has been taken down. Kirt broke his collarbone while filming for NWD at the end of July. He underwent surgery to have the collarbone plated and will be looking to be back on the bike in just a few weeks.The tour kicked off in Austin, Texas and made its way through Houston, Tx, New Orleans, LA, Atlanta, GA, Murfreesboro, TN, Asheville, N.C., Chicago, IL, Birmingham, MI, Verona, PA, NYC, Bloomington, IN, Minneapolis, MN, Vernon, NJ, Hood River, OR, Seattle, WA, North Vancouver, BC and back home to Bend, Or.

Each bike shop had it’s own unique way of running their demo, but there was a common liveliness apparent at each stop as mountain bikers from all over enjoyed an afternoon riding some of the best bikes in the world.

The Nomad and Blur LT and XC were the most popular bikes. Almost every dealer called to tell us clients were ordering new bikes left and right! We felt great to hear the demos were successful but the most important thing for us was getting to hang with the people. The owners of the shops were awesome, the shop guys were all fun and knew their stuff about the bikes. Without the shop guys our demos would not have been half as good as they were. Thank you so much to everyone who changed pedals, adjusted bolts, answered questions and sent people into the wild on safe bikes. 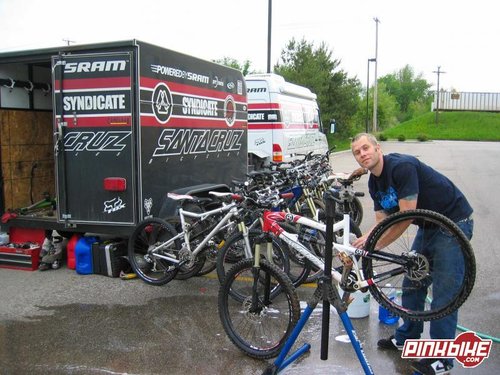 With too many adventures to recite and too many people to name, here are some memorable moments from the first half of the Allride Tour:

The very first stop in Austin, TX was the perfect way to kick off the tour. Hansen Ling and his crew set up an exemplary demo and we look forward to hanging with them again.

The demo in Houston was a hit with police protection and all. Street riding at night in the city with the enthusiastic Jeff and his gang from West U Cycles was a blast. Local Houston rippers James and Edwin Z showed Kirt around town. 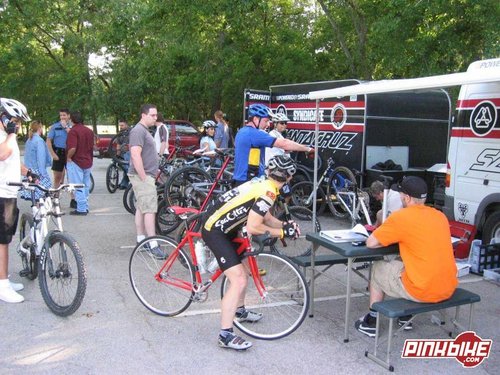 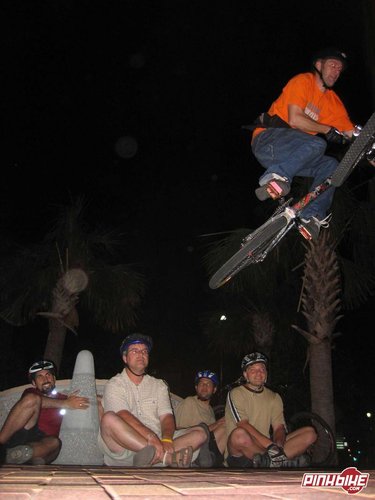 Our stop in New Orleans to check out the damage from Hurricane Katrina was surreal and haunting. We rode our bikes through the neighborhoods where houses were knocked into the streets and walls were black with water lines. We felt lucky and sad. We learned that our friends at West U Cycles in Houston donated over 150 bikes to people who needed transportation; that made us feel a little better.

Kirt went to college! Georgia Tech University in Atlanta, GA had some of the best “street” riding Kirt had come across in awhile. The guys at Peachtree Bikes hooked us up with some local riders and Kirt had a blast hitting the stuff around campus. The campus police didn’t mind as they watched in awe. Kirt was so excited that he had the guys from New World Disorder come film part of his segment there. 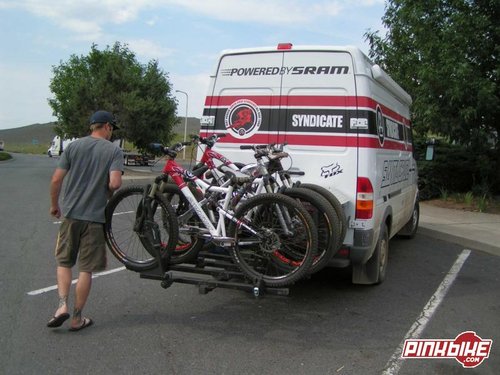 Camping in the Blue Ridge Mountains in northern Georgia and riding the Bear Creek trail was epic!

Riding the trails around the Ocoee River in Tennesse then street riding with the Murfreesboro guys around their neat town was fun.

Asheville, NC is a cute town with some great trails. The guys at Carolina Fats had a good customer turnout for the demo and I got to ride a sick trail out at Bent Creek that was just built called the Rollercoaster. The guys from the shop were super cool and we can’t wait to spend more time there. 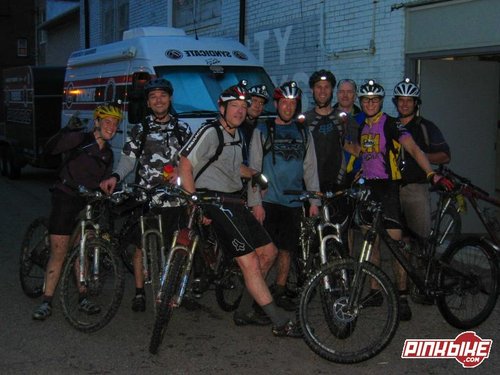 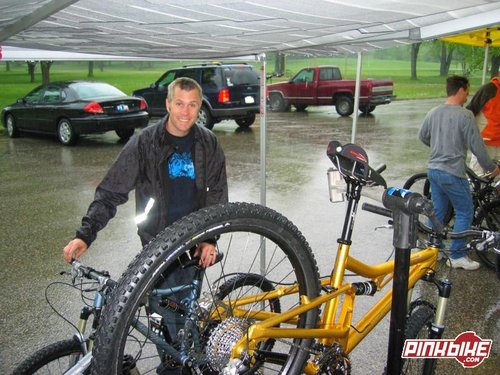 The slippery, rooty, steep climbs in the mud with the Dirty Harry’s crew in Verona, PA was a blast! It was challenging and fun after long days of driving and dealing with unruly weather. Barry and his crew were so much fun and the party after the ride was well deserved by all! It was fun for me to ride with Holly Forsyth who takes ladies on rides through Dirty Harry’s. Holly is a cool woman who races endurance MTB and promotes the cycling lifestyle to women!

Hanging out in New Jersey with Fox Teammates Aaron Chase, Jeff Lenosky and their families was a great break from the demo action. Kirt helped Jeff build some of his epic home trails, they rode his backyard and we partied a little too hard. I guess we needed the release. “Frankie goes to Englewood”, an 80’s cover band which included Chase’s guitar instructor, provided the entertainment and we danced all night; On the bar, on the ground, all over the place. Kirt even showed everyone how resilient his Fox underwear is.

The demo in New York was a big hit. Chris from Sid’s had a great crew out there testing bikes and to our surprise there were already quite a few Santa Cruz owners who came up to us singing their bike’s praises. It was fun to check out the trails they have built just outside of the city.

The US Open in New Jersey was great. There were plenty of riders, lots of rain and good clean downhill racing fun. Kirt took to his downhill bike for the first time in a year or so and loved racing the rocky course. He ended up 12th without any injuries and had some good catch up time with old friends. I did my first downhill race and loved it! I ended up 9th out of 17 and decided downhill racing is very scary and hard. 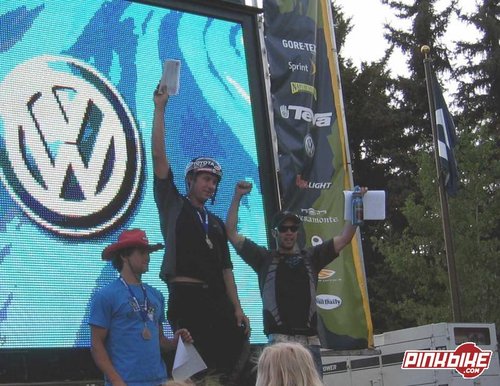 Our quick stop at the Teva mountain games in Vail, Co. was a lot of fun. It was a speed trials/race/freeride competition that Jeff Lenosky helped design. Kirt got second in front of a big crowd of action sports enthusiasts.

Moab, UT. The destination of choice for the SRAM/Rockshox product launch camp could not have been a better treat for us! They hooked us up with a swanky little hotel called the Gonzo Inn; we rode bikes twice a day, swam in the pool, ate great food and hung out with the media and all-around great people for 5 days. What more can I say about that? We’re pretty spoiled sometimes and we always have fun with everyone from SRAM! Oh, they also had everyone riding Nomads while they tested the new Forks.

Filming for New World Disorder at a place called Post Canyon in Hood River, OR was going very well for Kirt until the broken collarbone incident. The ER put him in a sling and he still did a demo for Discover Bicycles in Hood River. The demo was huge and we were excited to introduce our newest partner, Deschutes Brewery. The Hood River crew was stoked to ride the bikes then enjoy a nice cold brew while hanging with Kirt, the gimp. 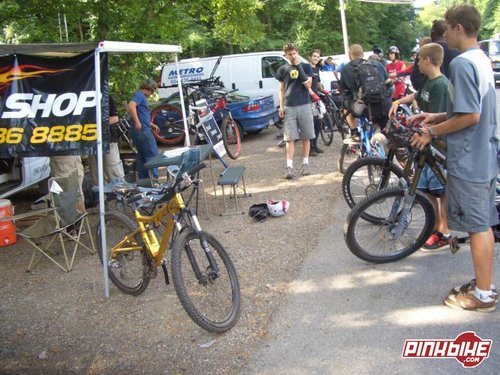 The Seattle demo was fun and in a beautiful spot. The Vancouver demos went off without a hitch and the addition of Kirt’s cousin, Ron and our friend and mechanic, Travis proved useful as they took over the changing of the pedals and functioning of the bikes while Kirt sat helpless, and medicated. 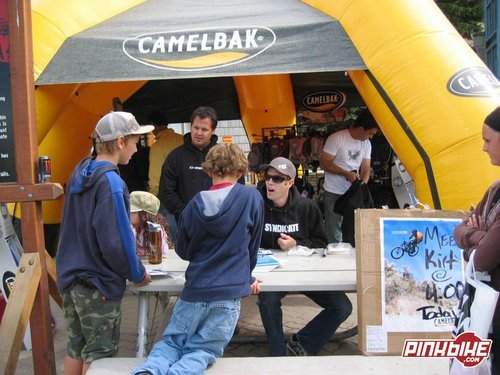 WHISTLER!!!!!!!!! The Allride Tour made it to Whistler for some serious riding and mingling with the bike world. I rode as much as I could and raced the Enduro Downhill on Garbonzo. We had to drive Kirt from Whistler on a Sunday morning all the way to Bend (12 hours) for surgery on a Monday. Tuesday morning around 5 am we got in the car and I drove us back up to Whistler. Thanks to CamelBak for our unbelievable hotel room overlooking the slopestyle course! It was a great place for Kirt to recoup and still be in a spot where people could come visit him and keep his spirits up. We had a great viewing party with our Deschutes brew, yummy rummy drinks and tons of friends and fellow bikers.

Currently, the Allride Tour is back home in Bend, OR where Kirt is healing up and getting ready to climb back on the bike. We will be preparing for round two, so look for us in September and October in California, Arizona, Colorado, Nevada and Utah!!

Click HERE to see where we'll be in Round 2.

Go out and ride your bike or come try one of ours! See you soon!