Saying Goodbye to A Friend 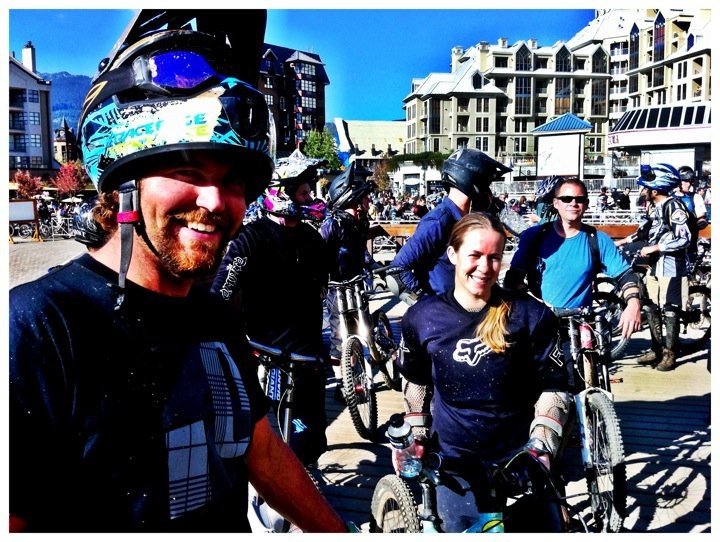 It's been a tough day for people in the B.C and Pacific Northwest bike community. Yesterday afternoon we lost one of our amazing riders to an avalanche outside of Pemberton. Duncan Mackenzie was 30 years old and an avid skier. He worked as a senior ski patrol at Whistler and was with other very experienced outdoorsmen when the accident occurred while ski touring. To most people Duncan was more than a skier and rider. He was a coach, mentor, competitor, and an amazing trail builder. But, most of all, he was a great friend. I dubbed Duncan the Prom King of Whistler. Every local knew him, and everyone liked him. He had an infectious smile that would light up the grayest of days. It was hard to walk through the village with Duncan and get anywhere swiftly because he would be stopped every 30 feet by someone who wanted to say hello.

I first met Duncan several years ago in Whistler while taking a camp. He was my coach and we had so much fun riding together that we stayed very good friends long after the lessons were over. Knowing Duncan meant knowing a part of Whistler's soul. During the summer months he worked as a trail builder under the moniker D-Mac Trails. He's built trails all throughout British Columbia, with his precise and skillful hands. If you've ridden Whistler, chances are you've been lucky enough to experience a D-Mac creation. Duncan loved woodwork and tight singletrack. His riding style was technical and calculated. He had the endurance of an Iron Man, exhibited by his strong finish in the B.C. Bike Race.

Duncan's entire life was dedicated to keeping other people safe. From coaching technical safety skills on bikes to his long days as a patroller he made sure people were always in the best hands. Known for his great sense of humor, he often brought comedy to a stressful situation. I know from first-hand experience when he scooped me up after I piled it off the GLC drop a few years ago. Never had I laughed so much while in so much pain. That's a true gift that not many people have. With Duncan, it came as easy as breathing. The fact that Duncan spent so much time and energy helping other people makes this situation even more difficult. He was a hero to many. He was a hero to me.

Rest in peace, Duncan. Your absence is excruciating to everyone who knew you. We know you're in a better place with endless pow fields and perfect berms, but we wish we could have had a little more time with you. No matter where you are keep lighting up the world with that smile. We'll see you on the flip side. 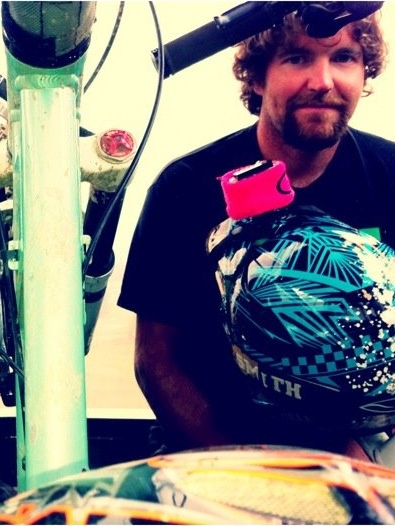 Justa25 (Dec 30, 2011 at 20:44)
The kind of news, you read over and over in disbelief and refuse to process. I only met him briefly through my friends and on the mountain a few times and as you said it he had an infectious smile. Rest in peace Duncan, you will be missed.

cmacdougall (Dec 31, 2011 at 7:32)
Never met Duncan, but it he seems like an awesome guy and it's always sad to hear about a fellow shredder passing. Rest in Peace man, my condolences to his family and friends.

mbudgen (Dec 31, 2011 at 13:43)
Duncan was a great friend and the very best kind of people. Losing a guy like him is hard on everyone that had the pleasure to know him or ever meet him. Love and best wishes to all his family and loved ones he left behind. You will be missed bro...Rest in Peace Thank you for writing such a thoughtful tribute.

xenophile (Dec 31, 2011 at 18:19)
Never had the pleasure of meeting Duncan, but he was obviously a champion. His kindness, humour, smile and passion for life will never be forgotten. RIP Duncan, you made the people and landscape around you better - a feat most will never achieve.

andrewdionne (Dec 31, 2011 at 20:53)
man this sucks. I hate reading about stuff like this, because even though i didnt even know the guy, its enough to put a stab in my evening. someone doing what they love and are killed doing it. RIP man.

RoyalT523 (Jan 1, 2012 at 1:37)
R.I.P. great guy, more knowledgeable about snow than you could ever imagine, huge loss for booth the skiing and biking community, shred in peace Duncan!

cretin82 (Dec 31, 2011 at 0:26)
cant say I knew the guy but from reading about him above he sounded like an amazing person and unfortunately he lived a short life.but life should not be measured in years but by how you lived them good one and he was greatly loved. my heart goes out to all his friends and family. R.I.P.

emeric (Dec 31, 2011 at 8:30)
Never meet him, but always sad is the lost of somebody so much appreciated by everyone... For me, mountain biking is not only about riding, it's also about friendship between us, a big family driven by passion and caring for each others...
maybe one day i'll have the chance to go to Wisthler and i'll have a big smile on my face riding shores thanks to you.
RIP "brother" biker.

leverfingers (Dec 31, 2011 at 7:31)
I was shredding the trees a couple mountains east of there that day. I need a hug. Going to the village to get some. And to give, there's 3 that really need one. It's all OK for Duncan now. But what a bitch for the others. You know when the patrol scoops your injured ass off the mountain that you are being handled by pros with some very serious experience(s) under their belts.

geoffjansenphoto (Dec 31, 2011 at 0:33)
Duncan was one to always crack a joke. he was my favourite patroler by far. RIP Duncan. Shred some pow and dirt in heaven for us all!

robertbbr (Dec 31, 2011 at 10:10)
Duncan was a great guy. I met him my first time to Whistler in 2003, when he was on trail crew working. There was a power tool ban due to forest fires and Duncan was hand building Smoke and Mirrors. He had such a zest for trail building and life in general. It's hard to hear news like this, but it's comforting to know that he died doing something he loved. Is that not the best way to die?

tbonetbone (Jan 1, 2012 at 9:34)
I met him the same year robertbbr, He was a great guy I skied and biked with him over the years and this is really hard for all his buddies. He did have a great zest and will be missed on every future ski trip/ bike rip.

captain-sandbag (Dec 31, 2011 at 8:40)
I was so choked to read this. I never knew Duncan personally, but heard the stories through friends and I know he'll be missed. The good really do die young, RIP. And please remember, if it can happen to Duncan it can happen to anybody. Be careful out there.

Sharonb (Dec 31, 2011 at 7:11)
condolences to his friends and family. The mountain bike and ski community lost last thursday.

ebxtreme (Dec 31, 2011 at 9:04)
Thank you, Lace. Duncan came down to help our crew route two trails a couple years ago - Unemployment Line and a trail that is yet to be built. Well, really, it was just an excuse to drink beer and bushwhack through the woods.

D-Mac, I'm gonna miss shredding and B.S.'ing about trails with you. Rest in Peace my friend.

Biscuitto (Dec 31, 2011 at 10:04)
Now obviously I've never met the guy, but from reading this article, it sounds like he is one of the people who knows how to live life to the full and have a good time. I can tell that being in his company made others feel happy and relaxed, and that is why Duncan will be truly missed by all who have met him, and other people like myself who have never met him but can tell that he was a straight up awesome dude. Rest in peace.

tylerthegiant (Dec 31, 2011 at 10:29)
well i have never been to canada, but he sounded like the guy to chill with. rip duncan. it gave me goose bumps reading the story and the comments. glad every one can come together and share story's.

wee-eck (Dec 31, 2011 at 13:50)
I lost a very good friend a couple of years ago and know that it does get easier with time, not much but it does get easier. I'm not a believer in God or reincarnation or anything like that but I know my mate is with me every time I ride my bike or board because he is always in my thoughts and my heart and always will be.

summit800 (Dec 31, 2011 at 8:43)
that sucks for everyone who is affiliated with him but at the same time he passed doing what he loved by the sounds of it. not for this to sound offensive but that is a truly hardcore way to go living on the edge! and beats cakin out in an old age home or jumping off a balcony into a swimming pool. this guy sounds super hardcore!

Duncan and his patrol buddies rescued me last spring when i broke my ankle snowboarding,he pulled me to safety in a toboggan down the garbanzo lift line run.The man had some serious skill's on his skiis.Like many others have said,he had a smile that would make you smile or laugh even at his bad jokes even when i was in such pain. r.i.p brother. you wont be forgotten.

cjsouth (Jan 1, 2012 at 16:11)
From High School to lettin me crash on your couch when I was stranded in whis to riding skiis and bikes hard! . I'll never forget your drive for life...you were an inspiration to me and I'll miss you buddy! RIP D-Mac

shishka (Jan 2, 2012 at 8:21)
When a legend in the mountains pass away this early in season what does it tell you? That shit is real out there and it can happen to you any time. Proceed with caution and hope for the best but the mountains could care less if you have the best gear and most experience.

finnrambo (Dec 31, 2011 at 21:53)
I also add how much it sucks he'll never be able to see all these comments with each and every one dedicated to him

tbonetbone (Jan 1, 2012 at 9:39)
Gonna Miss you on the next big ski trip man. Thanks Lacy for such a great tribute to a great guy. So much energy, so much fun so much zest for living. I'll be thinking of you on many a ski trip and bike trip Duncan.

AAAustin (Jan 1, 2012 at 19:12)
fuck. why does it have to be good honest people who die like duncan and dane searls why can it be gangsters and people who do great crimes. lifes a bitch. RIP man youll be missed.

ferretca18 (Dec 31, 2011 at 10:13)
Rest in peace! I'll be keeping you and the others that have had their candles put out this year in my thought, my last run down whistler will be for you guys!!

roseoakhill (Dec 31, 2011 at 12:46)
what a loss, RIP, never forgotten i hope, I'll think of him when im in Whistler next year, I'll certainly raise a glass to Duncan tonight

dyalnger9 (Dec 31, 2011 at 17:47)
So tragic, thank you for all the good things you have done for the mountain bike community. Rest in Peace, and by the sounds of it, you won't be forgotten

powderturns (Jan 3, 2012 at 14:04)
for once I actually liked the comments on a pinkbike article. Duncan was much loved and will be missed more.

julieoverthere (Jan 1, 2012 at 10:03)
Duncan taught me how to rip berms. He was a fantastic teacher and will be greatly missed. Thinking of friends and family.

We will remember you.