Join Pinkbike  Login
96 Comments
Scott's signing of Brendan Fairclough, one of the most popular and stylish racers on the circuit, was big news this off season, and while there were many photos of him training aboard a bright yellow Scott Gambler downhill bike it was no secret that Scott was busy developing a new race machine for Brendan and the rest of the Scott 11 team. The rumor mill was going into overdrive with whispers of a new carbon framed bike but, unlike many other companies, Scott was able to keep the new bike under wraps until they released these somewhat purposefully guarded photos to Pinkbike of Fairclough and the team testing in San Remo, Italy. The Scott 11 team will also be on the new machine at this weekend's World Cup race in Pietermaritzburg, South Africa, so you can expect more detailed full bike photos to come soon. 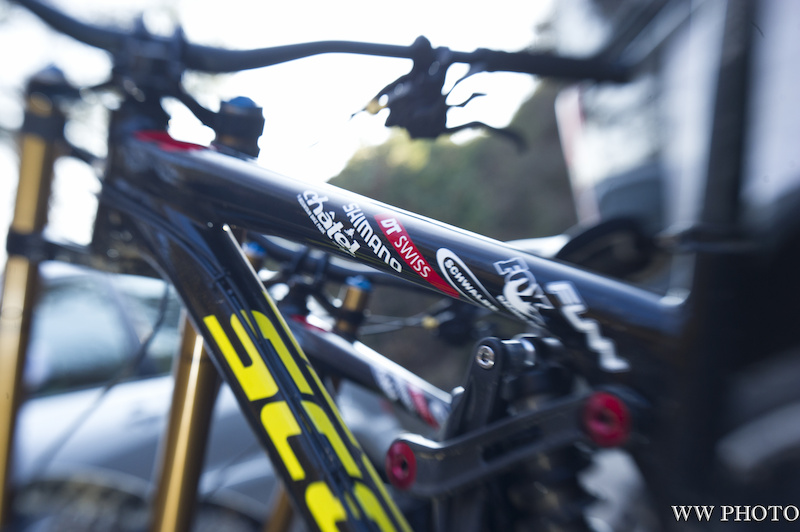 The prototype Gambler features an aluminum frame and a linkage activated shock.
While it is hard to round up much information from the above photo, it's easy to see that the bike employs an entirely different suspension layout from the previous design, even if it does share the same 'Gambler' name. The vertically mounted shock is activated by a linkage, that much is clear, and new frame also appears to not be made from carbon fiber. That's not to say that we don't expect to see a carbon framed Gambler at some point in the future but, given the price of frame molds, one can understand that Scott's engineers would want to be confident that the team is 100% satisfied with the design before progressing to carbon. 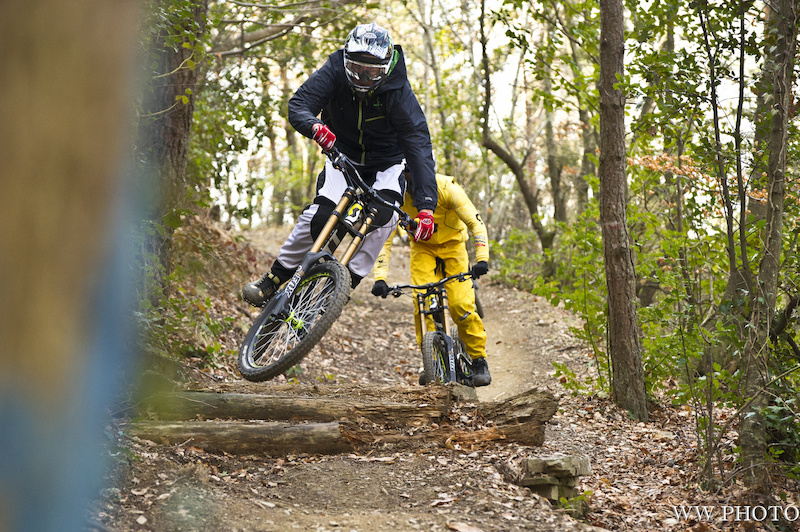 foggeloggliod (Mar 14, 2012 at 17:33)
vital mtb has pictures of it here www.vitalmtb.com/photos/features/2012-UCI-World-Cup-Pietermaritzburg-South-Africa-Day-1,3370/Slideshow,0/sspomer,2?utm_source=facebook.com&utm_medium=referral&utm_campaign=addthis#.T2Ew0TslBQ0.facebook

I'm a fan of single pivots with progressive links, just funny to see that this design is coming back with so much hype.

robc10 (Mar 15, 2012 at 11:08)
Getting so tech nowadays with the linkages and such, the way such are ment to flex and compress in certain ways, cannot image how they will be in the future :0

NoahColorado (Mar 14, 2012 at 8:25)
"...while there were many photos of him training aboard a bright yellow Scott Gambler." It was a Voltage not a Gambler, I believe.

Drood (Mar 14, 2012 at 8:57)
It specifically said aluminum lol. It's like you clicked the link and scrolled right down to comment without reading a word.

webbe (Mar 14, 2012 at 9:03)
Will there ever be a picture of Brendan riding a downhill bike that doesn't look insanely stylish? By far my favourite rider, wish him all the best with the new season, hope he kills it.

cesalec (Mar 14, 2012 at 15:23)
That is definitely not the 2012 Gambler. It looks to be 2013 prototype, the top tubes look like those of the Voltage, but, the linkage looks weird, i mean, the small part that can be seen, looks much different from the current scott bikes. Not sure if I am liking that change at least from the limited looks of the linkage in that picture..

cesalec (Mar 14, 2012 at 17:13)
VitalMTB has a picture of the full bike on their Pietermaritzburg Day 1 presentation here:

And I was right, they completely changed the linkage, it doesnt only look excesively complicated and heavy, it looks hideus! Scott just lost a costumer if thats going to be the new Gambler....

paulwootton77 (Mar 14, 2012 at 11:32)
i don't think that was a problem anyway as the article said "it's easy to see", to start off the sentence describing the suspension.

bogey (Mar 14, 2012 at 18:55)
@paulwootton77, if read farther it would have been clear that Mike Levy didn't know how the linkage worked. Yes, it is pretty clear that it is linkage driven - good one.

cthorpe (Mar 14, 2012 at 12:29)
I knew it. Any time a frame company signs a high profile WC racer, they develop a new DH rig. From this limited view it looks unique. Everyone keep an eye out for a new GT DH bike soon. i bet money, spy shots will surface this year.

Leesethebeast (Mar 14, 2012 at 20:00)
From the full photos it isn't looking too great, maybe this is why the coastal crew left, on another note all I want is a linkage piece to give my voltage a full 8 inches of travel, then it would truly be all I need. But that would take customers away from this bike so I'll probably be machining it myself somehow

co-slopestyler (Mar 15, 2012 at 0:25)
So after reading this blog in its entirety I feel like there wasn't a single descent explanation of how this bike actually works. Totally understandable seeing as how this is the first evidence we've seen and the clue were offered is a blurred image of 1/2 the bike.
So if you're still reading I would like to share my perspective on the thought that's goin through everyone's mind as the read this post; "How does it work?..."
So to begin, take a look at the rear triangle. It s a one-piece swingarm chassis mounted on a single pivot to the seat tube. The body of this chassis extends past the pivot and around the shock, where it attaches to a vertically positioned link (the V-link). The shock is mounted to the front triangle just above and forward of the BB. The previously mentioned v-link attaches to the other eyelet of the shock and creates compression when the swing arm is activated.
So... Still w/ me? Really? ... Cool.
As I was saying; a one piece swingarm mounts to the seat tube and compresses the shock via the vertical link.
Perpendicular to the vertical link is a horizontal link (H- link) which attaches at one end to the frame and extends forward attaching to the v-link at a pivot that is just below the v-links shock mount. The h-link creates a floating pivot point that allows for the tuning of either compression rate or axle path. Maybe both? Hopefully it at least helps with the brake-jac.
This unique prototype frame appears to share similar designs to previous Scott bikes, with the swing arm having almost identical lines to that found on the later Scott Nitrous frames. And it seems one might say the front triangle is a hybrid between the Genius LT & the Voltage.
So yeah, that's what's I got to say. Not sayin I'm right. Just sayin...
If you're still reading, thanks!

co-slopestyler (Mar 15, 2012 at 0:42)
Side note: by no means would I expect this to be too close to the finished product. Notice the use current and previous design elements. Typical Scott protocol when it comes time to develop something new. Kinda like Voltage/Nitrous prototype...

wonkle (Mar 14, 2012 at 9:03)
All of the comments saying carbon of you read it they said. "frame moulds are exspensive so they're getting it 100% before moving to carbon"

Jeromev (Mar 14, 2012 at 10:19)
With Faircloughon on the team you just knew this was coming. Linkage looks very different from the Voltage.

Antonio-Scott (Mar 15, 2012 at 2:19)
Interesting linkage, but bulky. Poor design, i hope that it only prototype and Scott change design.

here it is side on

TomCostello (Mar 14, 2012 at 9:51)
Not carbon im afraid! They would be using a single monocoque frame but from what I can see in the picture its alli by the looks of the top tube and downtube shapes anyway, far too circular to be carbon

which DH fork has a tapered steerer?

taper the head tube so you have to run a reducer headset as a bottom cup?

Want a single crown bike.. the voltage is killer in that application.

denverdh666 (Mar 14, 2012 at 8:56)
looks alot like the suspension on their moto trail bike or whatever
Below threshold threads are hidden

shishka (Mar 14, 2012 at 8:24)
Lol Scott using their brains and not falling into the carbon hype like all these other companies. The gambler already light enough so whatever they did can only make it better.