Slavik and Curd Take the 4X Wins at Fort William

On Saturday 8th June, the 2013 4X ProTour rolled into Fort William, Scotland for round 2 of the 2013 tour. Riders from 12 countries around the World all arrived in Fort William to fight it out and see who would be crowned the winners.

The weather was simply perfect. Blue skies, no clouds and blazing sunshine all week gave the riders and spectators perfect conditions for practice and racing. On Thursday, round 2 kicked off with practice.

The track, unchanged from 2012, is one of the ProTour's fans favourites, long start straight, aggressive rock section and loose turns make this track unpredictable and exciting every single year. 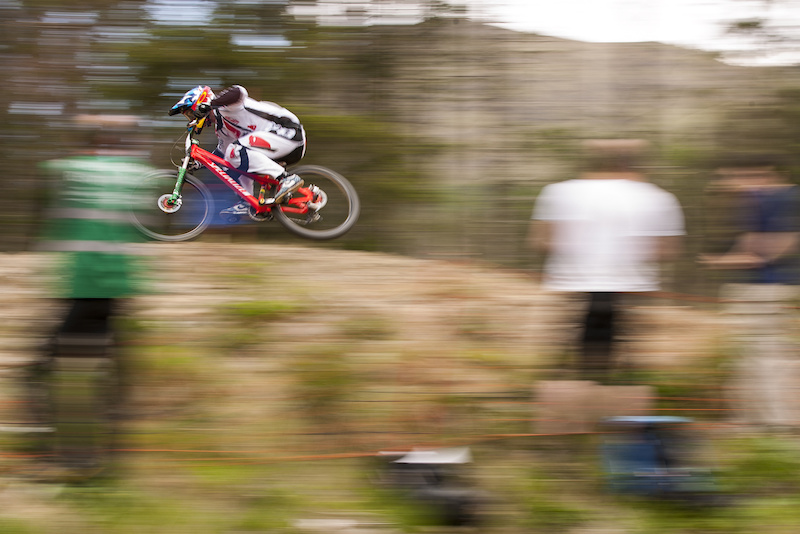 Riders got to grips with most of the track quickly but, as always, the rock section was really the focus point on Thursday as everyone searched out the fastest line. Jump all the rocks, ride down them or, hop left to a bank were the options; only qualifying would show what was the best. 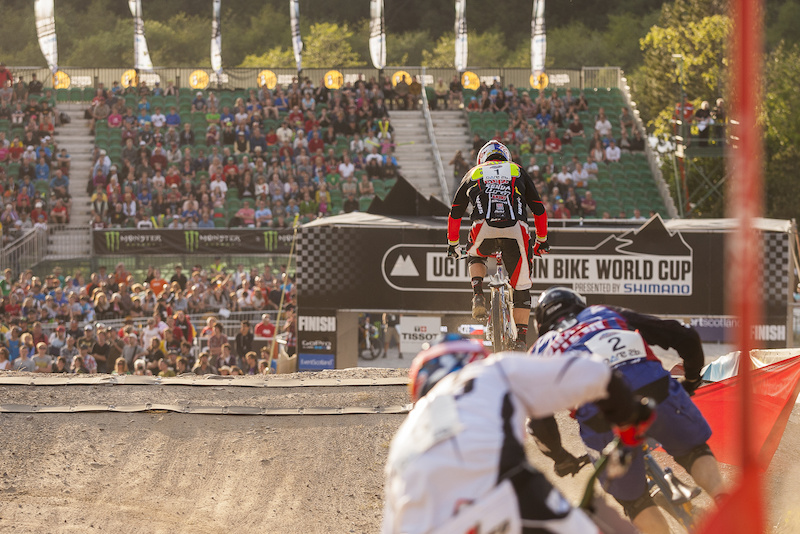 Friday, and more blue skies and perfect conditions. As always qualifying would be vital to give riders that all important gate choice for when racing started on Saturday night. First up were the women. 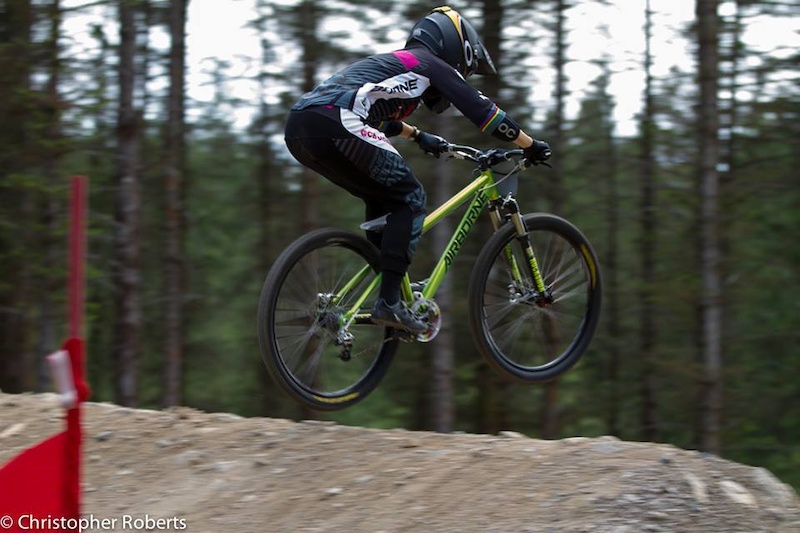 Caroline Buchanon was back racing 4X for the first time in nearly two years. She was the first rider on course and set an amazing time of 41.8. Celine Gros, Lucia Oetjen, Steffi Marth and Helene Fruhwith could not better the time. Anneke Beerten was next up. The 2012 4X World Champion had a good run, but again couldn't beat the time set by Buchanon. Finally it was down to winner of round 1, Katy Curd. She absolutely tore the track apart and set the fastest time - 0.2 ahead of Buchanon and Beerten in 3rd.

Next up were the men. Joseph Vejvoda set the early pace with a 39.537 - the first rider below 40 seconds. Isaac Mundy, Dan Bateson and Hannes Slavik then took their turn in the hot seat. The final five raised the bar though. Quentin Derbier initially took the lead. His Nicolai team mate, David Graf then went fastest. Scott Beaumont looked smooth and fast but came in second. Prokop got close but crossed the line in fourth. Last rider down and winner of round 1, Tomas Slavik absolutely nailed it. A perfect lap gave him the fastest time.

On Saturday, huge crowds, more blue skies and a historical night of 4X went down. Fort William has never failed to deliver and in 2013 it produced one of the best 4X races ever seen in the Highlands. 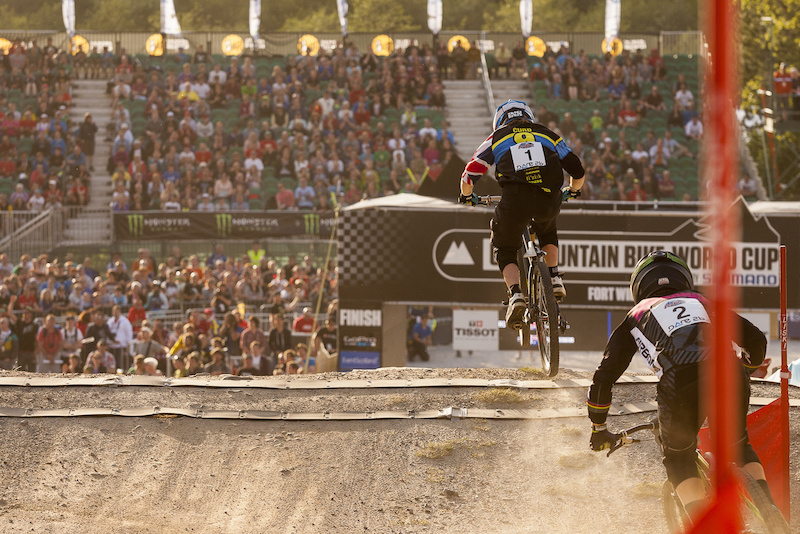 In the women's semi finals, Katy Curd, Lucia Oetjen Steffi Marth and Suzanne Lacey lined up on the gate. The home crowd were going crazy for the Brits, Katy and Suzanne. As the gate dropped though it was Katy and Lucia who had a relatively uneventful race to move into the final. Katy got the snap from the inside gate and just did not look back. Lucia held the racing line well and secured her place in the final too. In the second semi final, Caroline Buchanon, Anneke Beerten, Celine Gros and Helene Fruhwirth lined up. 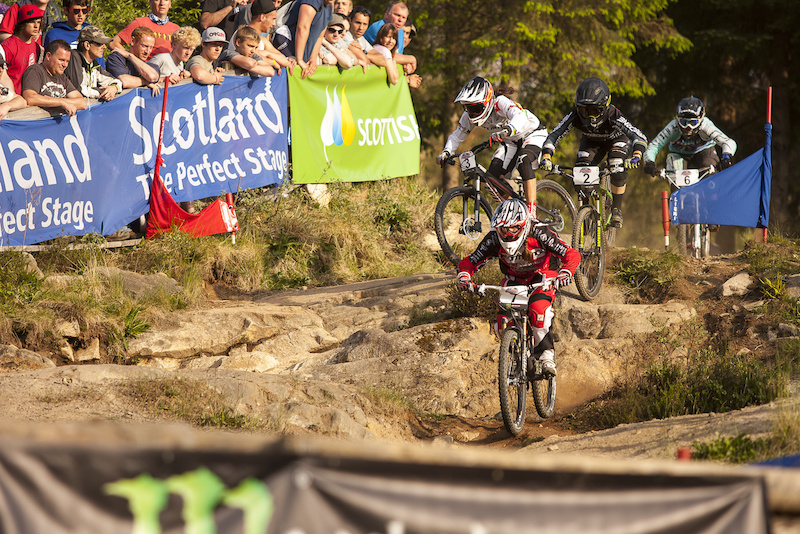 This could easily have been a final at any ProTour round. As the gate dropped it was Buchanon in the lead, closely followed by Beerten. In what was the move of the night, Celine Gros moved from third into the lead at the top of the rock section. It was awesome and Gros held on to the finish ahead of Buchanon. World 4X Champion Beerten was certainly shell shocked as this was the first final she hadn't made in a long time. 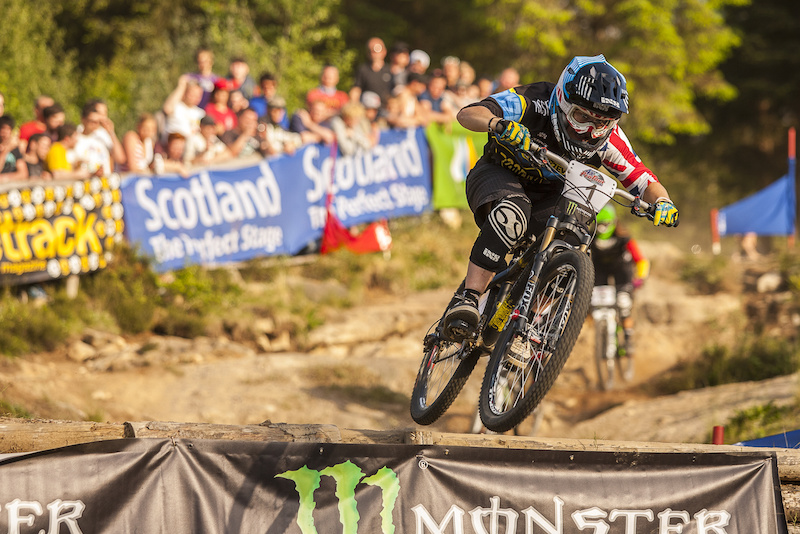 In the small final, Anneke Beerten took no prisoners. She made the snap and took the win to secure the final spot on the podium. In the main final, Curd took gate 1, Buchanon 2, Oetjen 3 and Gros on 4. It was Buchanon who made a perfect start and took the lead. Curd was close and looking for a way around. At the rock section she seized her chance, made a great pass and took the lead. The home crowd simply erupted. Under pressure all the way from Buchanon, Curd kept her head and brought it home to take a very emotional win in front of the British crowds. She said after the race that this was her finest win of her career. 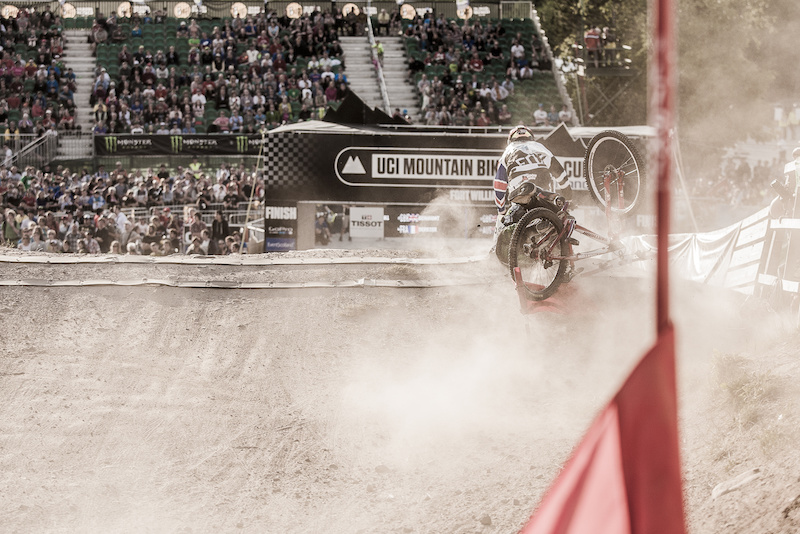 In the men's there was an early exit for European Champion Felix Beckeman. A flag infringement in the rock section was reported by the UCI commissaries and the red card was shown to Felix. British rider Will Evans had a huge crash in the quad section in the quarter finals. A concussion for the Cornish rider was a relatively lucky escape for a nasty crash.

On to the semi finals. In semi final 1, Tomas Slavik opted for gate 3, Michal Prokop took gate 4, Quentin Derbier on 2 and last pick Isaac Mundy had gate 1. The run from the gate to the first jump is smooth from gate 3 and rough from gate 1 so at this race, the top guys tend to gate from the outside. As the gate dropped, Slavik got the snap and led into turn 1. Prokop followed him from the outside and slipped into 2nd. Derbier hounded Prokop all the way, but couldn't find a way through. 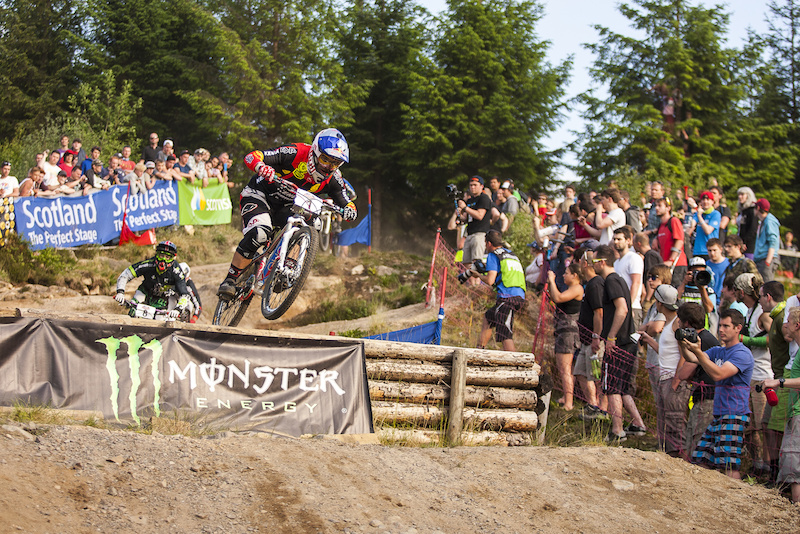 In semi final 2, David Graf took gate 2, Scott Beaumont 3, Joseph Vejvoda 4 and Hannes Slavik in 1. As the gate dropped it was Beaumont and Graf in a drag race down the first straight. Graf took the lead in turn 1 and Beaumont moved into second. It all looked set into the final turn until Hannes Slavik carried a huge amount of speed, dived inside and moved ahead of Beaumont with a text book pass. Across the line the disappointment was clear for Beaumont and the British crowd, but the absolute delight for Hannes Slavik was obvious. This was the first final that he has ever made in the 4X ProTour.

In the small final Beaumont took gate 2, Derbier 1, Mundy on 3 and Vejvoda on 4. As the gate dropped Beaumont got the snap but pulled his left foot out of his pedal. Derbier took the lead and Beaumont was at the back. Mundy sat in second but in the rock section Vejvoda went wide trying to pass and and slid off line. Beaumont then moved into third and closed onto Mundy's rear wheel. In the final turn Beaumont made the same move as Hannes Slavik had made to him in the second semi final and he moved into second place. Derbier took the win and the final spot on the podium with fifth overall. Beaumont second, Vejvoda third and Mundy in fourth. A great race though to decide fifth to eighth place positions.

So it was time for the main final. Tomas Slavik again took gate 3, Graf took 2, Prokop on 4 and Hannes Slavik on 1. The gate dropped and Tomas Slavik won the drag race to turn 1. Prokop tried to follow him through turn 1 on the outside but Graf moved in from the inside. They battled down the second straight but Graf grabbed the place. Over the quad and disaster struck for Graf, a rear flat tyre. He was still in second and tried to limp home to grab second but in a photo finish, Prokop, on the line did enough and took second with Graf in third and Hannes Slavik in fourth.

Tomas Slavik rode fantastic all night and the victory was all his. 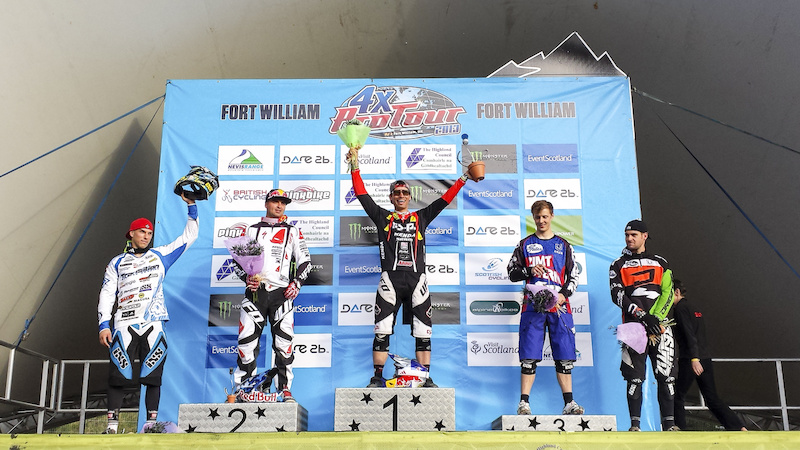 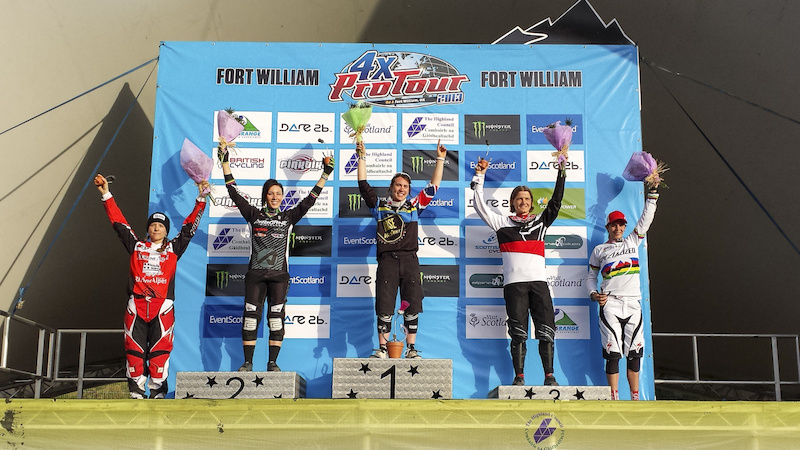 Round 3 of the 4X ProTour will take place next week - 15th of June at Val Di Sole in Italy.

For more information on the 4X ProTour, visit:

powermutant (Jun 9, 2013 at 23:47)
Why the delayed and minimal coverage. No report, no vid, no live coverage. Protour will die without the exposure.

bigburd (Jun 10, 2013 at 5:43) (Below Threshold)
Because 4x never really turned out to be as cool as promised , it never was MX on push bikes , tracks are to smooth , jumps to small ( cmon guys on 20 " wheeled BMX's generally go faster and bigger ) , no mountain bike track should be faster on a Hardtail.

davi-roberts (Jun 10, 2013 at 0:45)
There's a awesome video at the top? The crowed looked awesome and loud too! Track looked so loose! Amazing bit of racing!