Join Pinkbike  Login
2010 World Championship Silver medalist and proud Canadian, Steve Smith, suffered an ankle injury in practice race morning in Val Di Sole and couldn't race, after qualifying second. After a few days of tests, and after the swelling came down, doctors have concluded that the Devinci Global Racing athlete has a broken Tibia and a separated Fibula that will take him out of the World Championships next week in Champery, Switzerland.

Smith stopped by Pinkbike's Morzine headquarters this morning and talked a bit about his injury and his outlook on the season. Not one to be easily brought down by injuries, Smith was all smiles and is already looking forward to getting his surgery next week and getting back on the rehab train to come back stronger than ever next season. Look out, Pietermariztburg!


Despite not being able to race World Cup finals this past week, the Cassidy, BC resident managed to finish out the season in 5th place in the World Cup overall, taking home a coveted crystal trophy. Smith made his way to the podium to collect his overall trophy, no matter what. Heal up Sender, Canada needs you. 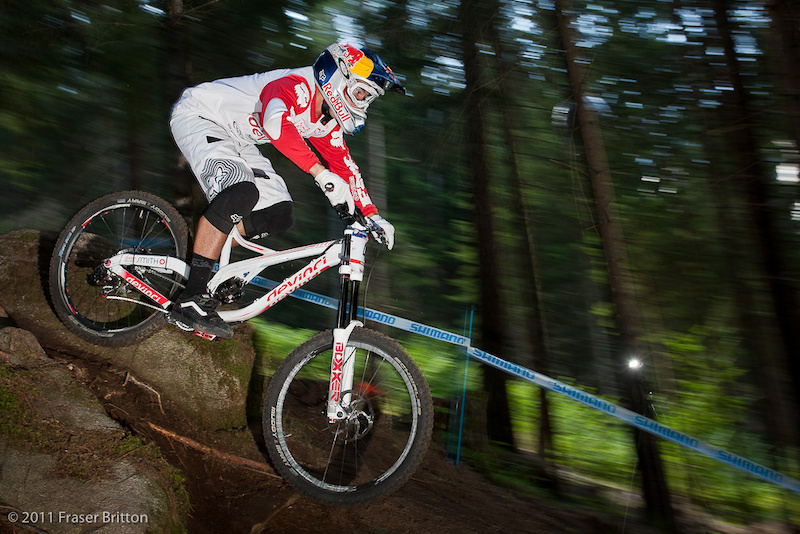 Stevie was killing it all week and would have given Gwin a run for his money for the win.


Posted In:
Racing and Events Injuries

goldengarbageman (Aug 26, 2011 at 7:49)
As long as he doesn't shave those wicked sideburns, I won't care how he does next year. Bummer about the ankle this year, but it's motivation for next. Go Stevie!!

dirtbagluvin (Aug 27, 2011 at 8:14)
I am a doc. What you separate is really called the interosseous membrane. It's a thin sheet of tissue that holds the tib and fib together as well as provides for lots of muscular attachments. This is the tissue that is damaged in "high ankle sprains".
Heal up Stevie and if you need any rehab advice (which I'm sure you have covered) hit me up. It helps to have an insane MTB doc work on an even more insane rider!! Best of luck!!

snl1200 (Aug 25, 2011 at 10:15)
Crazy that he's so mobile in those pictures given the extent of the injury...not exactly a twisted ankle. Perhaps he's a distant relative of Chuck Norris. The pain must have been immense but you wouldn't guess it looking at the photo's.

jondurham (Aug 25, 2011 at 12:01)
I know some people who have gone through the same injuries and surgeries and its not an easy road to recovery. I hope everything goes well for you and wish the speediest of recoveries to come back and absolutely kill it next year

andytheaussie (Aug 26, 2011 at 15:30)
Easily one of my favourite riders and I had him down as a dark horse for next week. Good to see him taking a long-term view and getting the operation done now so he can be in the best possible position come next year's World Cup.

10feetover (Aug 27, 2011 at 15:52)
I've seen Steve Smith when he fall down, I was pretty shure that he could win the race because he had lot and lot of speed, really when he fall down, he was insane and all the morning he had impossible runs. I think he really deserves all fan's support, and hope he'll be back really soon! heal up steve!

oldschoolj (Aug 25, 2011 at 9:18)
Get well Stevie! You have had a very inspiring year! Looking forward to next season. Fraser, look after your bud! Cheers.

shishka (Aug 25, 2011 at 11:21)
Wow this really sucks, tib fib breaks no fun long recovery. I wish steve the best and know he be back in action. He was having such an awesome season and look how fast it come to an end. I can feel steves fruatration as i deal with my own injury setbacks. Thats all part of riding on the edge. Hope he can make it back to that high level he achieved this season.

thecarpy (Aug 25, 2011 at 18:40)
I broke my Tibia and Fibula at the same time playing hockey. All I can say is PHYSICAL THERAPY. That's my advice. They are rough bones to break.

ButtonPusher (Aug 25, 2011 at 10:42)
what a shame... but injuries are part of the sport, especially at this high of a level. Watch for him to come back harder than ever next season.

canadianmtbiker (Aug 25, 2011 at 12:00)
good job stevie you have done canada proud sending it all season hopefully this surgery will help you get 1st next season and show that canadians are the best !

vpsryder (Aug 25, 2011 at 16:03)
thanks for all the hard work and dedication dude! I know your going to come back next year with tons of confidence, it was an awesome year of shreddin!

misterpeanut (Aug 25, 2011 at 9:30)
so gutted, Smith was just pinning it this year. Heal up man, I really enjoy watching you SMASH the sh*t out of the mountain.